Back in December, the Vanguard – citing projections from PKF Consulting, which was privately commissioned to do a study on the market demand analysis – published an article suggesting that hotels might be the key to short-term revenue needs for the city.

The PKF Consulting report found that four new hotels could generate between $1.5 and $2 million in new revenue for the city just by themselves. Since that time, the city council has approved a Transient Occupancy Tax increase, which could provide the city with about $300,000 in new revenues just with the existing hotel stock.

However, in January, the Vanguard ran a story where existing hoteliers believed that the PKF report was overly optimistic, arguing that, while the occupancy rate has rebounded since the recession, the rate varies heavily by day and month. Basically, from Sunday through Thursday, hotels have trouble booking rooms, and it is only on the weekends, mainly Friday and Saturday, where hotels approach 70 to 80 percent capacity.

In November, the city contracted with HVS Consulting & Valuation to prepare an analysis of the Davis hotel market to provide an analytical and objective context to assist the city with the review of the applications for the Hyatt House and Residence Inn, two of the proposals for new hotels. The council last fall had already approved the Embassy Suites Hotel Conference Facility at the site of the existing University Park Inn & Suites and Caffé Italia restaurant. That site will include a six-story 132-room Embassy Suites hotel and 13,772 square feet of conference space.

According to Tuesday’s staff report, “HVS analyzed scenarios for hotel development in Davis, with the existing room supply and the addition of Embassy Suites as the baseline. Impacts of adding additional hotels were projected. HVS concluded that the near-term development of a conference hotel facility with the addition of an extended stay hotel to be built shortly thereafter would be most beneficial to visitors, the City of Davis, other hotels in the market, and the overall community.”

However, HVS concluded “that the addition of another hotel, specifically another extended-stay facility, would not benefit the market for another four to five years after the initial extended-stay hotel has opened.”

HVS identified strengths and weaknesses of each of the two proposals, Hyatt House and Residence Inn, relating to location, brand, and development team. 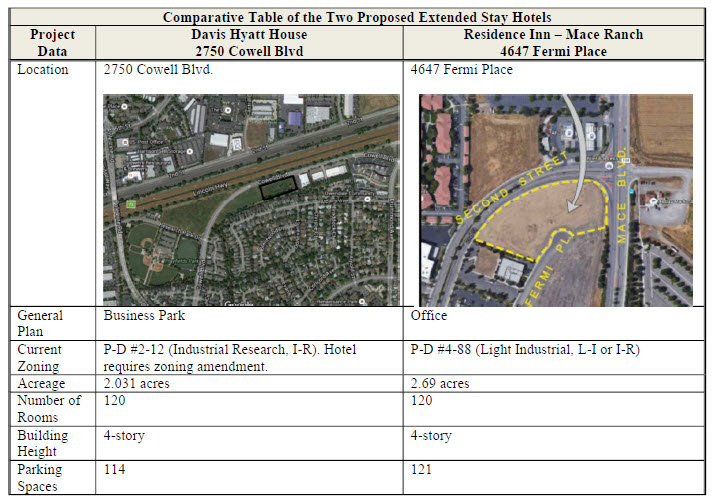 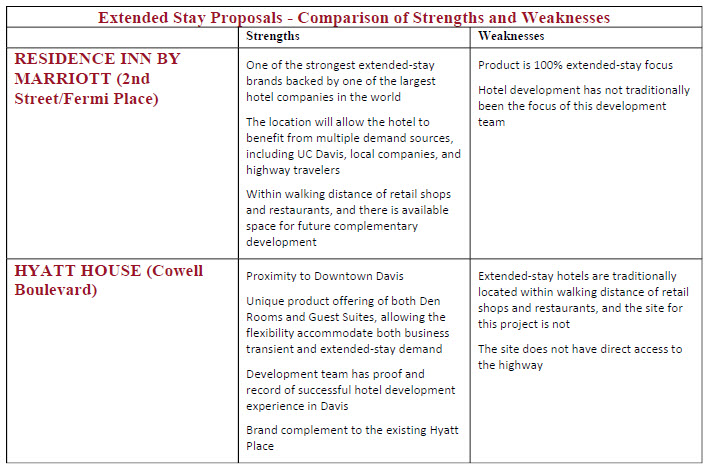 The Vanguard has previously reported that the PKF study puts the proposed Embassy Suites, which is currently on hold due to pending litigation, as critical to the analysis of other hotel needs. PKF argues that utilization of “even half of the 18,000 square feet of meeting space would likely require additional guestrooms than what would be offered at the Embassy Suites, thus requiring additional, conveniently located hotels to accommodate this overflow demand.”

They note, “A hotel with approximately 18,000 square feet of meeting space would typically feature between 350 and 400 guestrooms.” But the Embassy Suites will have just 132 rooms, which means that Davis will need other hotels to complement the Embassy Suites in order “to capture either overflow group demand that is booked at the Embassy Suites (but can’t be accommodated).”

PKF argues that at least three new sites can be “readily absorbed by the market,” and they find “occupancy is projected to increase to 67.0 percent in 2019 and further increase to approximately 70.0 percent in 2020 and 2021. It is at this level we project the Davis hotel market to stabilize. While this stabilized occupancy level is above the annual average occupancy level achieved by the Davis hotel market since 2007, it is in line with the year-to-date performance and is reflective of the growth occurring in Davis.”

Existing hotel owners are skeptical of these claims from PKF, and point to their own analysis that paints a very different picture.

They note, while the occupancy rate has increased from 61 percent in 2012 to 67 percent in 2014 (the most recent data available), the rate varies by day and month. Basically, as indicated above, from Sunday through Thursday, hotels have trouble booking rooms, and it is only on the weekends, mainly Friday and Saturday, where hotels approach 70 to 80 percent capacity.

But even these are variable, depending on the time of the year, with the summer months generating heavy usage that falls way off during the late fall to early spring. In essence, there are only about five times during the year when the market is saturated – when UC Davis opens, Picnic Day, and during three separate graduations, in the spring, fall and for the law school.

The analysis notes that coupling additional hotels with the already-approved Embassy Suites would add about 328 rooms to the market that would have to be absorbed – the existing hotel owners do not see the demand generators at this time to justify that belief. 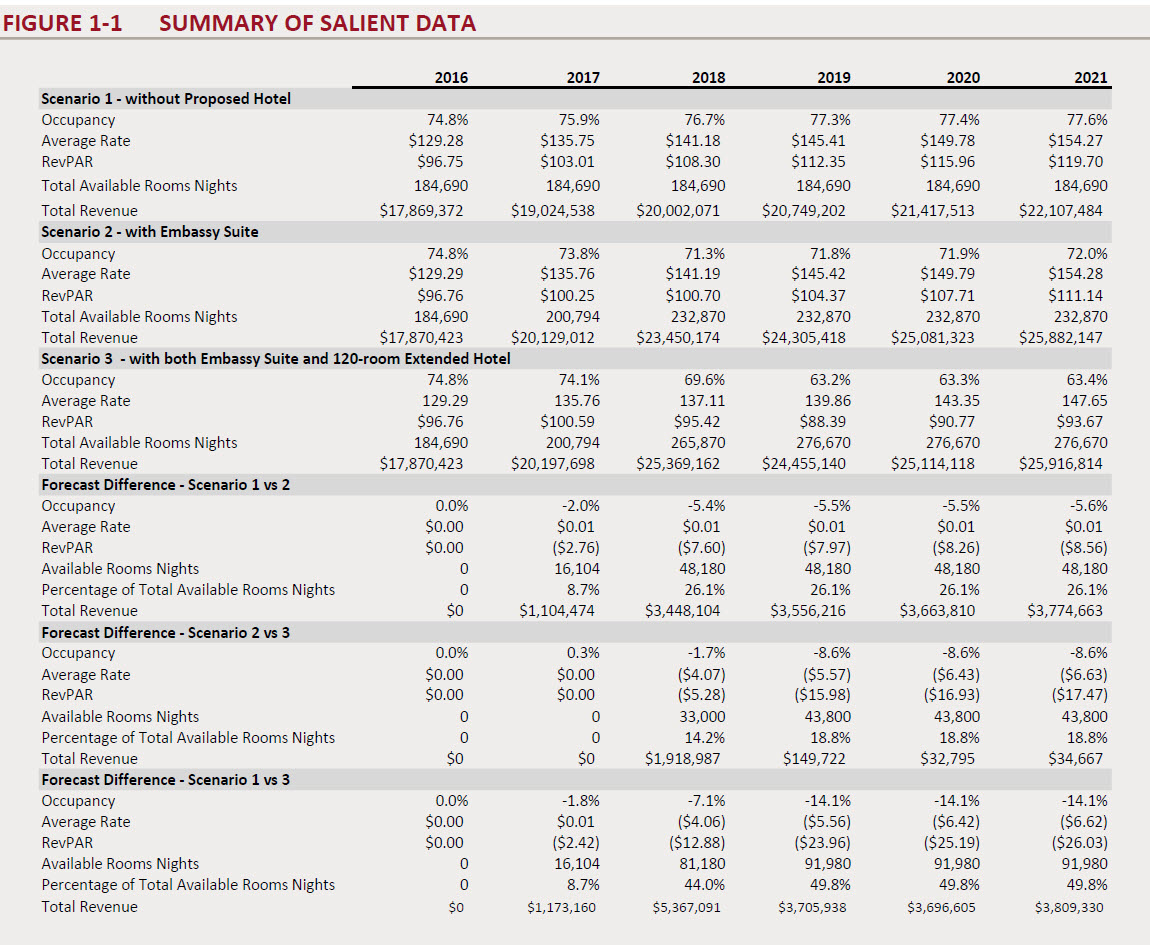 The HVS report analyzes the study performed for the Hyatt House, noting, “Based on the forecast, occupied room nights will have to increase by 40% over a two-year period to sustain a 65–66% occupancy level. Those figures are somewhat extraordinary, especially for a market that has yet to surpass 70%.”

They note that “it is likely that those occupied room nights will come from induced demand associated with the Embassy Suites and unaccommodated demand from those who would like to stay in Davis, but the types of accommodations desired do not exist or are sold out. Furthermore, the projected (2015–2021) compounded annual growth rates for the previously described metrics are higher in all categories when compared with those achieved between 2007 and 2014. Although the stabilized level of occupancy for the Davis market appears somewhat robust, it is clear that there are significant levels of unaccommodated demand in this market.”

However, HVS adds that “although projected to be higher than historically achieved in the analysis completed by PKF, it is reasonable to assume that the entry of branded, high-quality hotels would have a positive impact on the rate structure of the market as a whole.”

HVS concludes that these projects “appear slightly aggressive but not entirely unreasonable.”

City staff writes, “Staff accepts the analysis that shows that construction of one extended stay hotel in Davis would benefit the City and the market by capturing room nights from visitors who are going elsewhere because they are seeking either amenities or a hotel brand that is not available here.”

“Additional rooms in an extended stay hotel could also complement the hotel conference center by accommodating overflow guests, provided there are mechanisms to address inefficiencies of shuttling meeting-goers,” staff adds.

However, staff concurs “with the HVS conclusion that there is not current capacity to absorb the rooms proposed for both the Hyatt House and the Residence Inn if they were to open within the same period of time.”

Staff, therefore, is recommending that “the City Council review the HVS analysis, identify questions for follow-up with the consultant, and direct staff to return in April with criteria for Evaluation of hotel proposals to determine which application(s) should be processed through Planning Commission and City Council hearings.”

Share:
Tags:Embassy SuitesHotelsHVCHyatt PlaceMarriottPKFTOT
Previous : Judge Quashes Subpoena for DA Reisig’s Wife to Testify in Lovett Trial
Next : Commentary: Trust Is Paramount if We Are Going to Move Forward