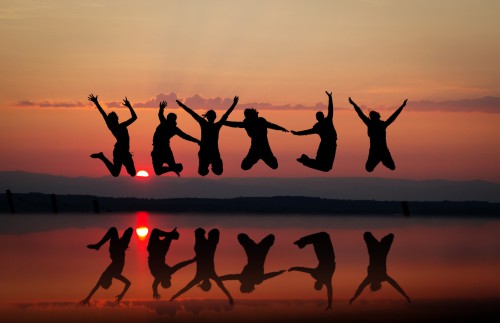 The harder the truth to tell, the truer the friend who tells it. – Mel Wasserman

I was about ten years old when, on a visit to my father’s parents in Dallas, I was apparently babbling on to my grandfather with stories about my friends. For a reason I did not understand at the time, my casual description of these relationships as friendships seemed to irritate him. His response was to interrupt my little monologue with the following backhanded wisdom: “If, at the end of your life, you can count five people as friends, you will be a lucky man.”

This statement confused me, since at the time I could have named a dozen friends in my neighborhood alone – not even considering how many other friends I hoped to make throughout the rest of my life. I distinctly remember wondering why grandpa didn’t have more friends; then, I suddenly got that he was putting me down for calling my friends, friends. I also caught on that his beef was with me giving away ‘friend’ status so easily. I shrugged off the criticism at the time, but it stuck with me.

Okay, admittedly, my grandfather was not a barrel of laughs nor very good, in general, with kids.  Nevertheless, now that I am about the age he was then, I have a better perspective on the lesson he was trying to teach me.  And while I am careful not to put down kids I work with who, like the younger me, are pretty casual users of the term friend, I get that real friendship status ought to be a special thing. This flies in the face of social media sites like Facebook where friendship status is given to anyone with whom you are comfortable sharing your postings and vacation photos.

What would Grandpa have thought of Facebook, not to mention other media sites used by kids? It’s hard to know for sure. His issue of ‘friend’ being a watered-down term differs from mine. When it comes to modern friendships, I worry about two things: 1) The effect of social media on the development of social skills, and 2) The effect of a child’s choice of friends on their attitudes and behaviors, leading to a host of potentially serious issues. Let’s take them one at a time.

Truthfully, most people know the difference between a real friendship and a cyber-list of people one ‘likes’ where the relationship can be more or less managed without ever being face to face.  Are you bored or irritated with someone’s postings? Unfollow them; they will likely never know.  Need to make a bigger statement?  “Unfriend” them.  They will figure it out eventually, but not because you said anything clear about the relationship to which they could react. In cyberspace, it is unnecessary to be direct and clear about your feelings regarding this person or their postings.  As a matter of fact, if you do give an honest reply to a post you don’t like, or make a substantive comment to a ‘friend’ about how they come across on-line, you may just set off a firestorm of negativity and find yourself wondering if throwing in your two cents was really worth the trouble it caused.

Unfortunately, one of the potential casualties for young people of on-line ‘friendships’ is not developing the sets of social skills one acquires with more face to face interactions.  Successfully addressing a vexing issue with someone face to face requires some forethought and some bravery. To confront someone – assuming you are open to repairing the relationship and not just flaming it to an end – requires commitment, including hearing and dealing with that person’s as yet unspoken issues with you.  However, with the successful resolution of a contentious issue, the friendship deepens.  In a committed relationship like marriage or a business partnership, for instance, it is vital for a couple to learn to fight fairly so that the inevitable issues that arise day to day can be safely worked through. Enduring marriages and partnerships are not the result of a perfect match from the start; they are the result of the commitment of both partners to working things out when problems arise.

Postings, on the other hand, are easily misinterpreted, even under the best of circumstances.  Haven’t we all had the experience of something we texted or posted being taken by the receiver differently than we meant? The rise of emoji’s is due, I believe, to the need to add some emotional context to what we post.  In person, you get an actual face to read and a tone of voice to ask about or interpret. The more we manage our relationships via cyberspace, however, the less we develop our actual communication skills.

Lest I come across as a fist-waving, fuddy-duddy about technology, I, too, have a Facebook account and enjoy keeping up with friends and family through cyberspace. But I deal with kids who are being raised in cyberspace, where even lovers can be found or discarded with a swipe of the finger. Relationship building skills are not taught in schools (except when people like me are running groups) and it is very easy for young people to get caught in the social politics of cyber-communities through their phones. Cyber-bullying, for instance, has far out-distanced episodes of face to face bullying and has been the direct cause of many child and teen suicides.

As for my second point, that a child’s choice of friends has a direct impact on their attitudes and behaviors, I use the quote that heads up this article in my work with kids. It comes from another flawed teacher, like my grandfather, who ran ‘emotional growth’ boarding schools for kids whose behavior had become unmanageable at home and for whom a stay in the mountains, in a highly structured program was seen as a last chance to establish some immediate safety and a chance to learn the emotional growth skills they would need to become functioning and healthy adults. I ran one of those programs for him in the early 90’s and this quote was the basis for a workshop for kids on the subject of friendship.

The statement works for me for a couple of reasons: The language is just obscure enough that most kids want to hear it a few times before they are confident they understand it. (Repetition can be helpful when learning a lesson.)  It also captures some of my grandfather’s better intentions that day; finally, it clarifies that real friendship has its ups and downs and maintaining a real friendship will now and again take some real work.

Kids are attracted to friends/groups where their attitude is represented. For example, a child who hates school will tend to hang out with others who also hate school. S/he is not likely to engage in conversations with friends on why they hate school – other than perhaps to throw mud at the system, in general, or at administrators or teachers, in specific. Some kids, however, end up hating school because they have undiscovered learning issues which interfere with their academic success.  They feel stupid and embarrassed, and becoming aggressive or truant addresses those negative feelings. Others have problems at home, sometimes creating a secondary gain to failing at school. When counselors have a chance to make sense of such school issues, we look for situations and relationship dynamics which might be behind the negativity. And while we address these issues, we also have to address the influence of a child’s friendships because they often reinforce that negativity.  This can be tricky because it can easily trigger defensiveness – except that deep down, kids know what you are saying.

I like to ask kids what they see as the difference between a ‘best friend’ and a ‘regular’ friend.  I get many answers, depending on the age of the child and the location of the conversation, be it a counseling office, school or pod in Juvenile Hall. Many times, I hear that a best friend ‘has my back’ no matter what -with the implication being, ‘whether I am right or wrong.’ The quote asks the youth to consider that the ‘friend’ who encourages their negative attitudes and behaviors is not really a friend, at all. This is not really  a friendship; it is a situation of ‘misery loves company’.

I like to use the quote to honor those who will put our friendship on the line in order to tell me (what they see as) the truth rather than watch quietly from the sidelines as I make a potentially costly error in judgment. Our real friends will be honest with us.  This does not mean they are always right, but their hearts are in the right place and they risk us having a negative reaction, even one that could end the friendship, in favor of giving us the feedback they think we need to stay safe, healthy and out of trouble.

Acting as someone’s true friend, therefore, is not easy and it should surprise no one that we may sometimes come to the conclusion that “getting into it” {with him/her} is not worth it. This adds some credence to my grandfather’s position and may even validate his small number of real friends. However, if the saying, “We reap what we sow” is really true, then being committed to our friends means we will be rewarded in kind, at least sometimes, by those equally committed to us.

Share:
Tags:David Hafter
Previous : Monday Morning Thoughts: How Should We Find the Right Superintendent?
Next : Innovation Ecosystems Have and Have Nots