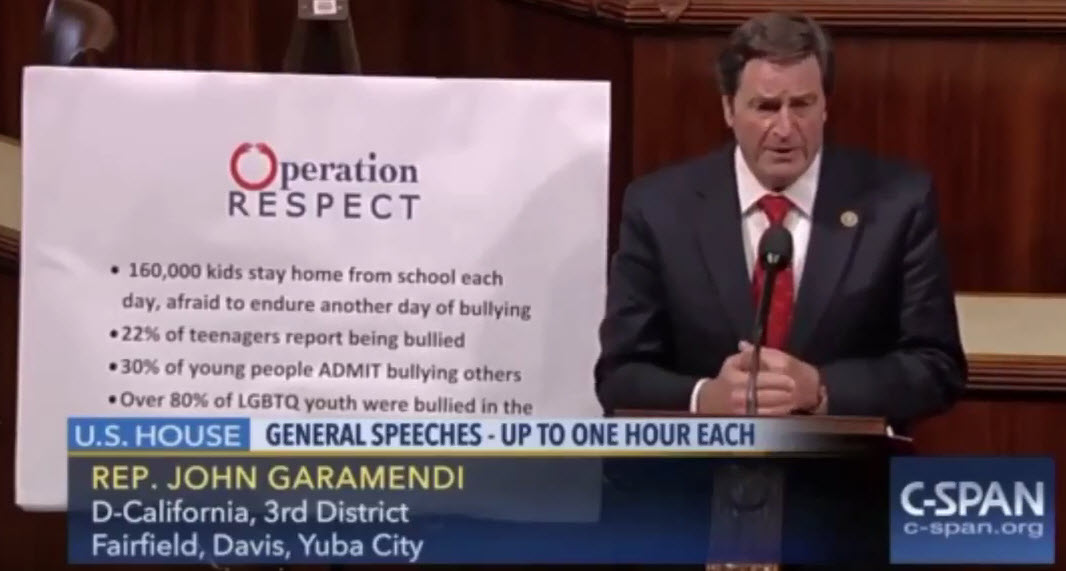 “THE CHILDREN ARE LISTENING” Congressman Garamendi (D-Davis, Fairfield, Yuba City) told his fellow Representatives during a special order hour about the issue of bullying in our schools and in our politics.  “Today, I rise to shed light on the epidemic of bullying in our schools, and the harmful effects it has on our nation’s children. Bullying is the reason that 160,000 American children do not go to school each day because they cannot endure another day of verbal and physical attacks from their peers. All too often horrific shootings on our school campuses are done by students who have been bullied.”

Last year, 70% of students admitted they witnessed bullying in their school and over 20% of teenagers report that they have been bullied or victimized by their peers. What’s more, over 80% of LGBTQ youth were bullied last year because of their sexual orientation and over half of Muslim students have experienced religion-based bullying at school.

“Unfortunately the Presidential campaign has descended into political discourse that is vulgar and demeaning personal attacks. What we are seeing and hearing from people who want to be our leader is school yard bullying. Unfortunately this political discourse is legitimizing this sort of behavior. The children are listening and they are going to copy it,” said Congressman Garamendi.

“Bullying harms people. Their lives are disrupted. They can become fearful and depressed. Individuals who are bullied sometimes strike out in acts of violence, both self-inflicted and against others. We need to take actions that help our children understand the result of bullying, and teach our students to express their feelings constructively and communicate with each other in the spirit of caring and compassion.”

Congressman Garamendi is a Founding Director of Operation Respect, a national movement against bullying dedicated to creating respectful, safe, and compassionate climates of learning that are free of bullying and prejudice. Operation Respect is currently active in 22,000 schools across the United States. Part of Operation Respect’s efforts include disseminating its “Don’t Laugh At Me Program,” which includes a series of interactive videos and songs that help teachers and elementary students alike address the issue of bullying in their classrooms.

Share:
Tags:bullyingJohn GaramendiLGBTQ
Previous : Public Defender Moves to Recuse Judge for Bias in Case of Child’s Death
Next : Stand for Me: Student Confronted by Hate and Indifference on Unitrans