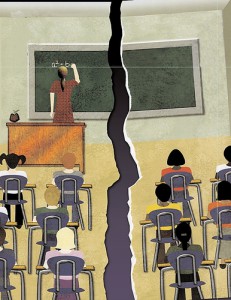 The school district, in a way, has a conundrum. On the one hand, as they finally made clear to the community, they expected that the changes enacted in November would reduce the size of the AIM program. However, having committed to reducing the achievement gap, the reduction in the number of black and Latino students was troubling.

As we noted in yesterday’s column, the board members themselves were divided on the issue in terms of how to approach it.

Madhavi Sunder, the board president, asked her colleagues, “Are the racial demographics acceptable?”

Barbara Archer would explain that she was not prepared to argue that the numbers of blacks and Latinos were unacceptable until the district has finalized numbers.

She did argue that we have a lot of work to do across the board, arguing that this is “a global issue” across the district, that of achievement for disadvantaged students. She argued that she knew the size of the AIM program would shrink but argued that AIM needs to be “needs based, not demands based.”

Alan Fernandes directly stated that he “doesn’t find the demographics acceptable,” but he did hear that the district is looking into ways to change it. He said he is not married to this approach and would be willing to support a change down the road.

Susan Lovenburg expressed concerns “that the protocol put in place hasn’t matched the diversity of the district as she hoped that it would.”

Some have argued that the lack of Latino and black identification is simply a continued manifestation of the achievement gap. But they run into a problem on that front – the argument by many is that AIM is not supposed to be a program for high achieving kids, but rather a program for gifted kids.

As Madhavi Sunder put it, “Do we think that the tests are accurate? Are we using the wrong tests if they’re not identifying the true potential in every one of our communities?” She said, “That to me makes me question the tests – because I know there is intellectual gifted-potential in every one of our communities. If our tests aren’t getting us there then I think it undermines my confidence in the tests.”

One thing that was clear on Thursday – those who support changes to the program want the program smaller and they are not willing to compromise on the size of the program in order to make sure it serves a representative population.

For some, they will see the push for diversity in the program as “a red herring,” and by this I deem it to mean diversity as a proxy for size. But, by the same token, a surprising number of people seem to be willing to shrug off diversity concerns in order to shrink the size of program.

My biggest concern is that, to date, we have only paid lip service to the idea of reducing the achievement gap. Had we shown a greater commitment to attacking its foundations, it may be more understandable to discount the lack of diversity of AIM. But given the lack of commitment on the achievement gap front, it seems foolish to accept the district at their word that the issue of the underrepresentation of blacks and Hispanics will be dealt with in any meaningful way with any sense of urgency.

Here are a few video clips. The first shows Jann Murray-Garcia making her public comment and the second is an exchange between Board President Madhavi Sunder and Superintendent Winfred Roberson.

48 thoughts on “Monday Morning Thoughts II: Is Race or Diversity a Red Herring?”