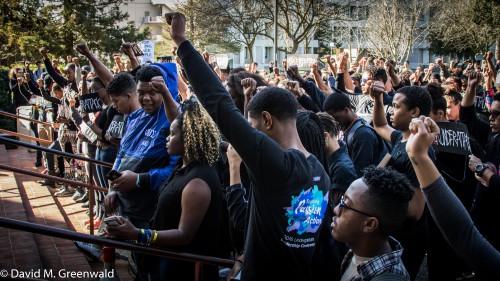 The introduction to this article will be purposefully short on the grounds that this piece is a much needed exercise in listening, instead of sermoning. However, I would be remiss if I did not divulge that every single individual I interviewed highlighted only a select few out of a rich collection of incidents to recount.

Thus, these stories are in no way comprehensive, but instead only a snippet – a thumbnail image of content that is too copious to fully grasp in one view. It is an excerpt from a longer chapter on the daily microaggressions of racism.

It is also important to note that some students abstained from noting things that were simply too traumatic to share. Therefore, this sampling does not express interactions which were categorized as ‘the worst’ that the speaker had experienced.

These accounts were not lifted from 1950’s Birmingham – they reference life in present day Davis, California.

Davares Robinson articulately explains how displays of anti-blackness are ever present as he divulges some of his own experiences. “As a black man attending a highly regarded R-1 institution, I have encountered various instances that appear to be rather typical for a black student attending a college that is not an HBCU (Historically Black College). Micro-agressions flourish here.

“They are the occasional remorseless stares of disdain that I receive as I’m walking to class, the library, or any public space. It is me making eye contact and smiling only to witness the re-tightening of the grip between two lover’s hands. It is the indistinguishable voice of one student amongst five hundred students, whispering, ‘yeah right,’ after my psychology professor says that there is no difference in intelligence amongst students; while discussing unethical practices in past experiments among students of color and their white counterparts to justify otherwise.

“It is my childhood friend saying, ‘I think that ALL Lives Matter is a better statement.’ It is me being told that a romantic relationship between me and a non-black student cannot happen because of our ‘cultural differences’ but yet a sexual relationship will do.

“Macroagressions live here. It is me nearly getting pummeled by bikers, while silently protesting to Mrak Hall and holding up a sign that reads, ‘#BlackUnderAttack.’ It is me and my peers being referred to as ‘niggercunts’ on social media platforms to counter our plea to have students oppose anti-blackness in all of its variations. It is me live streaming a black lives matter protest, and reading comments that say, ‘I Hope they die.’ It is here because everything was founded on needed perpetuation of it.”

Kyla Burke is a 5th year Environmental Science & Management major. She notes that when she shares her experiences with racism, she is always taken aback at how shocked white people are that her accounts actually happened.

To her, this is a testament to how commonplace micragressions have become and how much she has normalized them. Her most unsettling memory of biased treatment in Davis involved seeing her beloved father, a 6’2″ Jamaican man with dreadlocks, being treated as a criminal spectacle when he came to visit her at the dorms.

“I lived in the Segundo dorms and didn’t give him the best directions so he ended up driving down California Ave. to where the gate is. When he got to the gate he turned around and started to drive back. The cops pulled him over for no reason. He wasn’t speeding. He was driving slow, looking for me. He didn’t have his lights out or anything like that. As far as we could tell he was pulled over because they found him suspicious and a black man on campus at night. They ran his license even though they had no right to and when I walked up they wouldn’t let me approach the car until they were done.”

Kyla has also been aggressively told by a Davis citizen that she should be working to eradicate rape instead of spending her energy on addressing injustices within the black community. She has been slighted not only by police and random passerbyers, but also by her peers.

“My sophomore year I was at a party at AEPi and it was pretty crowded. I was walking into the backyard when I heard someone behind me say, ‘There are too many black people at this party.’ I turned around kind of shocked and his friend noticed me and pointed me out. The guy who made the comment got embarrassed and they got away from me quick. I left the party because I was upset and when I was walking down Russell I walked by SAE and you could see from the street that one of the members had a confederate flag hanging on his door.”

Lawrence K. was a freshman interested in Davis for its music department. He is an avid percussion and horns enthusiast, and self-identifies as a “band nerd.”

“My very first class at Davis. Like literally, the first experience I had. We were supposed to get into groups and interview the other student, then present their story to the class as a way to get to know each other. I was paired with a guy sitting on the aisle across from me. As soon as the professor signaled to start the group work, the guy turned to me and said “WASSSSUP MY NI**A!!!” in this funny voice like he was mimicking Dave Chappelle as he threw up some hand signal that I guess is supposed to be a gang sign, or a greeting, or – I don’t even know.

“I laughed as a reflex, or lack of another response – like a laugh of embarrassment. But it actually really pissed me off inside and humiliated me. I didn’t want to work with the guy. Lots of people heard and laughed and I felt like I was already otherized. I finally said to him…’hey, why did you call me “my n*gga”?’

“He got all apologetic like it was all a big misunderstanding and that he loves rap and is not racist. And then he patted me on the back and said, ‘Come on, don’t be like that. I’m half Asian. You can call me Bruce Lee if you want,’ and I was just like, ‘Dude, I don’t want to call you Bruce Lee.’

“It was all a joke to him. I couldn’t get him to be serious. It really upset me because my father is always caring about what other people think about us and has really internalized racism. Like, that we have to set an example that not all black people are ghetto. That’s why he always pushed jazz music on me and here is this guy saying, ‘Don’t worry… I like rap too.’

“As if he was trying to talk to me in terms he thought I would understand. No offense to rap aficionados but, please don’t assume anything about me simply based on my skin. The whole thing is problematic in itself, but when this guy did that, I just wanted to seriously ask, ‘Why did you equate me with some urban caricature?'”

Jerome Wren’s story is not only appalling but eerily too familiar, with the headlining altercations between people of color and police which have resulted in the loss of human life. “I’m a survivor of police brutality and racial profiling. Many folks wouldn’t believe that I was beaten and Tased by six cops here in Davis but it happened. My mentor and I were minding our own business at my apartment complex when the police pulled up and singled me out. There was no questions– the first words they said was, ‘You’re under arrest.’ I can’t help but to think it had everything to do with my blackness.”  (Editor’s note: The Vanguard covered this story in 2012.  Initial article – Sustained Complaint, Officer Fired)

Markell studies Neurology, Physiology & Behavior at UCD, but finds himself constantly having to prove that he is allowed to be on campus and is part of the community. “My freshman year I was walking on campus and I was followed by the police while I walked to class. They asked me what are you doing here, only for me to say I go here…And, when me and my friends walk in to parties some of the white people there always ask, ‘Do y’all go here?’ We say yes. They say, ‘Oh, okay cool, what do you study?’ and then it turns into a interview of me being established at this school. But honestly, in classes, on buses, solely because you’re black no one will sit by you.” Markell also recounts one of the most prolific questions pushed on the black community: “Can I touch your hair?”

Marcus King emerged onto the Davis campus from the redlined community of South Central LA. With a Psychology & Communications Studies degree now under his belt, he is currently gathering his ducks in a row to prepare for law school. Marcus’ experiences touch on a theme which has been present among many the individuals I had the pleasure of interviewing for this thread. It speaks to law enforcement’s hyperfocus on black bodies as signifiers of an impending threat or as foreshadowings of crimes yet to be committed.

Most of the incidents which stand out to him involved the feelings of injustice which arise when the old adage is flipped and people of color are instead guilty until proven innocent. When one must provide substantiation that they mean no harm, that they are allowed to be there, and that the only thing suspicious about their presence is that they are an African American person in an overwhelmingly white space.

“The first incident that I can think of was actually the day of my very first midterm. I was at that light – that main intersection that leads into the student parking lot. I came to make that left turn, my back window was rolled down, and I glanced over and happened to see a cop next to me. My first reaction was to smile, my mom always said when you make eye contact with someone you acknowledge them, and so I made my turn.

“As I pulled up to get the ticket to park and pay, the lights came up behind me.”

Marcus was then approached by the officer who said he was pulling him over because his music was too loud. When the officer saw Marcus had something in his hand, he reached for his gun. Upon realization that the student was unarmed, a second officer cuffed Marcus and put him in the back of the police car. Marcus was interrogated about previous unpaid tickets and the stipulations of his license, but was finally released. He was one hour late for the midterm he arrived early to study for.

“UC Davis is a good school, but on the other hand, it’s hard to go to a predominately white place. [To the police] I’m seen as somebody that’s undesirable, a nuisance, and then it leaves me wondering what I could have done different, or just questioning the whole thing. Like, is it because I’m black? Is it because of the music I listen to? Is it because of my shades? And when these microaggressions happen to you, you try to play the scene over and over in your head and think, what could I have done differently? I didn’t expect to see the [UC Davis] police behave in that manner, and I’m from South Central LA. I mean, if we’re always talking about how progressive things are in Davis, why the are the police so confrontational?”

99 thoughts on “Personal Accounts of Racism in Davis”