Monday came and the students remain entrenched in the lobby on the fifth floor of Mrak Hall just outside the chancellor’s office. The elevators were locked down, trapping a member of the cleaning crew inside temporarily.

The student protesters received written notice from Vice-Chancellor David Lawler requesting them to “vacate the fifth floor” and warning that their “continued presence on the fifth floor also constitutes unauthorized entry to… or use of University properties and may also obstruct the administrative business of the University.”

The letter claims they are in violation of several sections of the University of California Policy on Student Conduct and Discipline. The letter goes on to state it is the university’s preference “that you leave the fifth floor voluntarily rather than sending a referral to the Office of Student Support and Judicial Affairs.” It warns that “if you choose not to do so, then I will to send (sic) a report of misconduct to OSSJA. Disciplinary consequences can range from a formal reprimand to probation, suspension, or dismissal.”

Just after 10 am on Monday, a representative from the chancellor’s office came to the fifth floor to state, “I have been informed by the chancellor that she would like for you to schedule a meeting to meet with her, and when you all do that, she will. She’s not coming here, she is going to meet with this group as she has done with other student groups.” 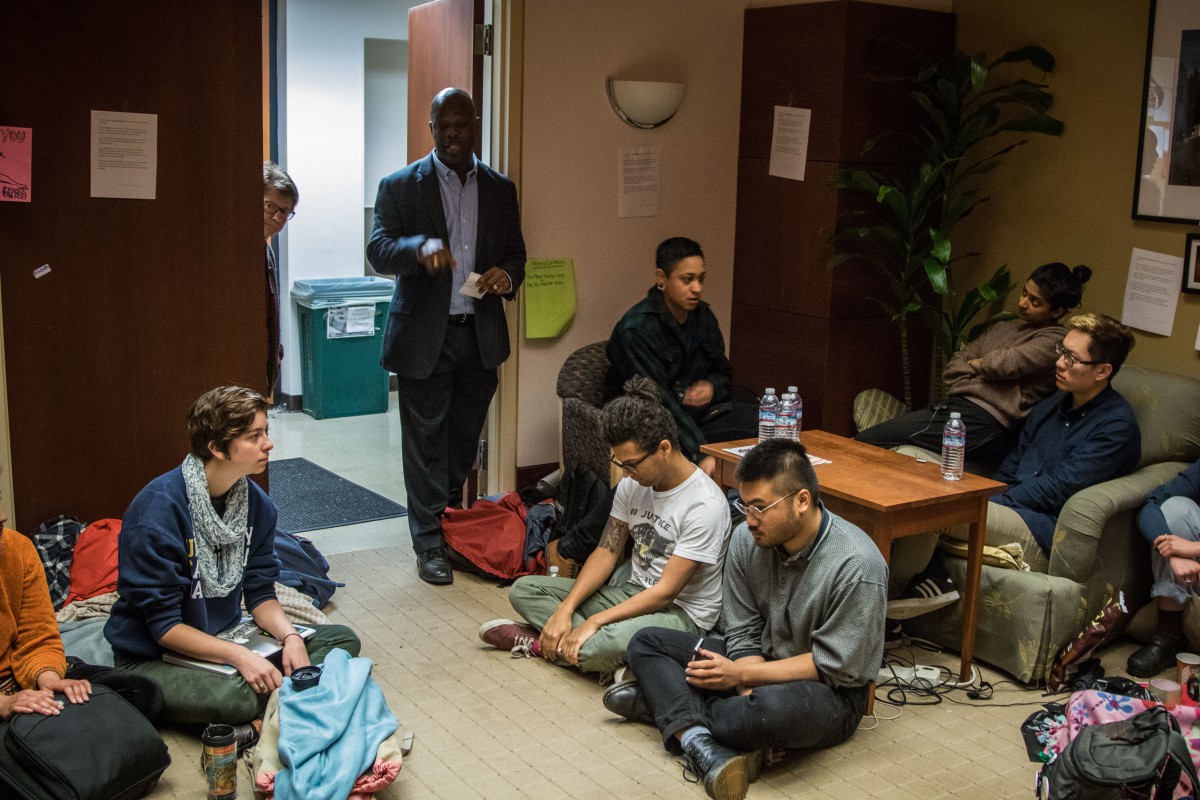 The students responded, “We’re not going to leave here until Chancellor Katehi comes here and talks to us about the resignation.”

“I will let her know that,” he responded. “But I want to be transparent and let you know that she’s not coming here to meet.”

The message from the students was simple, “We have nothing to say other than we are staying here and we won’t leave until Katehi comes here to speak and addresses her resignation.”

They also stated, “We wanted to let the media know that the police have been present and harassing a number of students that have come in and out of the building.” They also confirmed, “We have been threatened with SJA charges for continuing this occupation.”

“We think it’s ridiculous that Katehi doesn’t face any repercussions for the continued exploitation both of her privilege and position as chancellor and supposedly as a figurehead for the university, and yet students are just wanting to talk to her and express their righteous rage and concern over the fact that she’s continued to do these practices. Yet we’re the ones facing punitive justice by SJA,” they told the Vanguard.

The combination of heavy rains on Friday and finals week this week have kept the number of protesters relatively low. Estimates range from 35 to 50 students. That number seemed smaller on Monday morning.

However, a number of groups have expressed support for the student protesters’ actions. 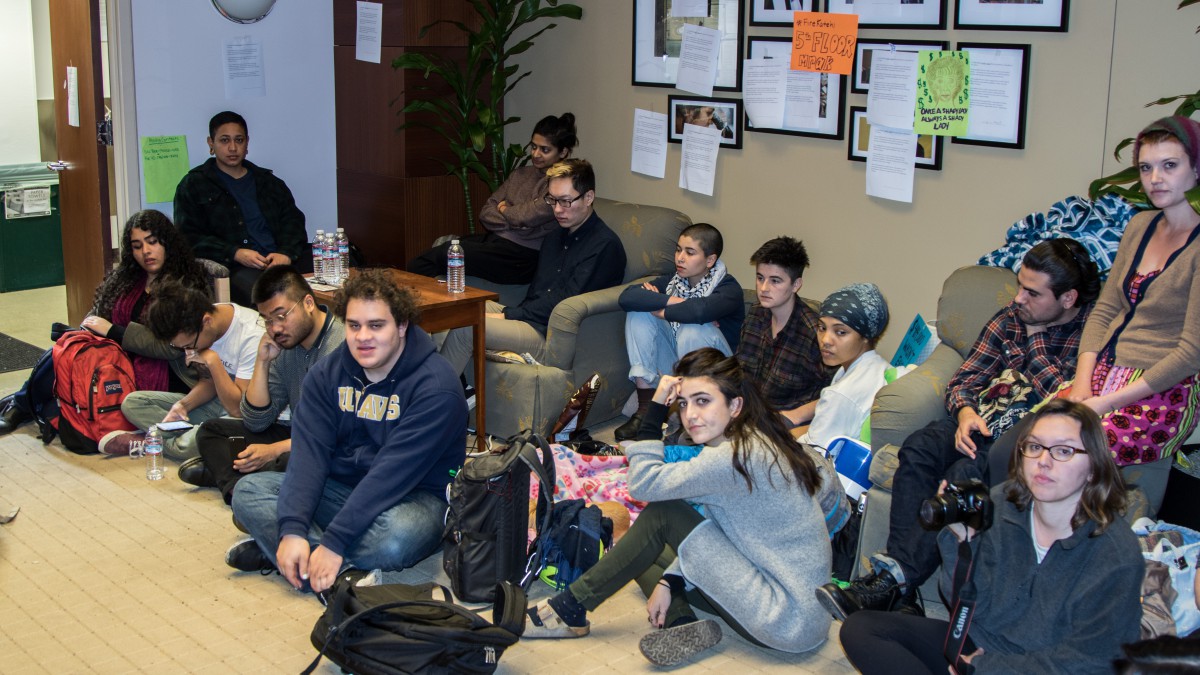 The UC Student-Workers Unions issued a statement “reminding” members of the UC Davis community “that Linda Katehi has a history of involvement in corruption and influence peddling in higher education, dating back to her previous position at the University of Illinois.”

They said, “Katehi irreparably damaged her relationship with students and workers at UC Davis by ordering police violence against student protesters in 2011” and she “compromised her chancellor position by accepting a board appointment and would-be monetary compensation of $70,000 from for-profit educational outfit DeVry, whose goals are at odds with the mission of the University of California.”

The students and workers are protesting “to demand the firing of Katehi in light of these scandals, and demanding that her replacement be selected and approved by students and workers,” arguing that the chancellor “has demonstrated her disregard for the values of public education.”

They are calling on the Office of the Present and the UC Regents “to remove Katehi as Chancellor of UC Davis” and to create “a process of selection and approval of her replacement by a democratic council of students and workers.”

An “Alumni Letter of Support for Student Occupation of Mrak Hall” states, “We join these students in condemning Chancellor Katehi’s greed and complicity in the privatization of our education system. (Her termination or resignation is long overdue.) Most recently, we see her willingness to create relationships with these institutions for her personal gain. Moreover, she has a history of poor judgment, (ranging from lack of transparency, to militarization of campus). Katehi has consistently displayed qualities that a leader of a public organization should never have.” 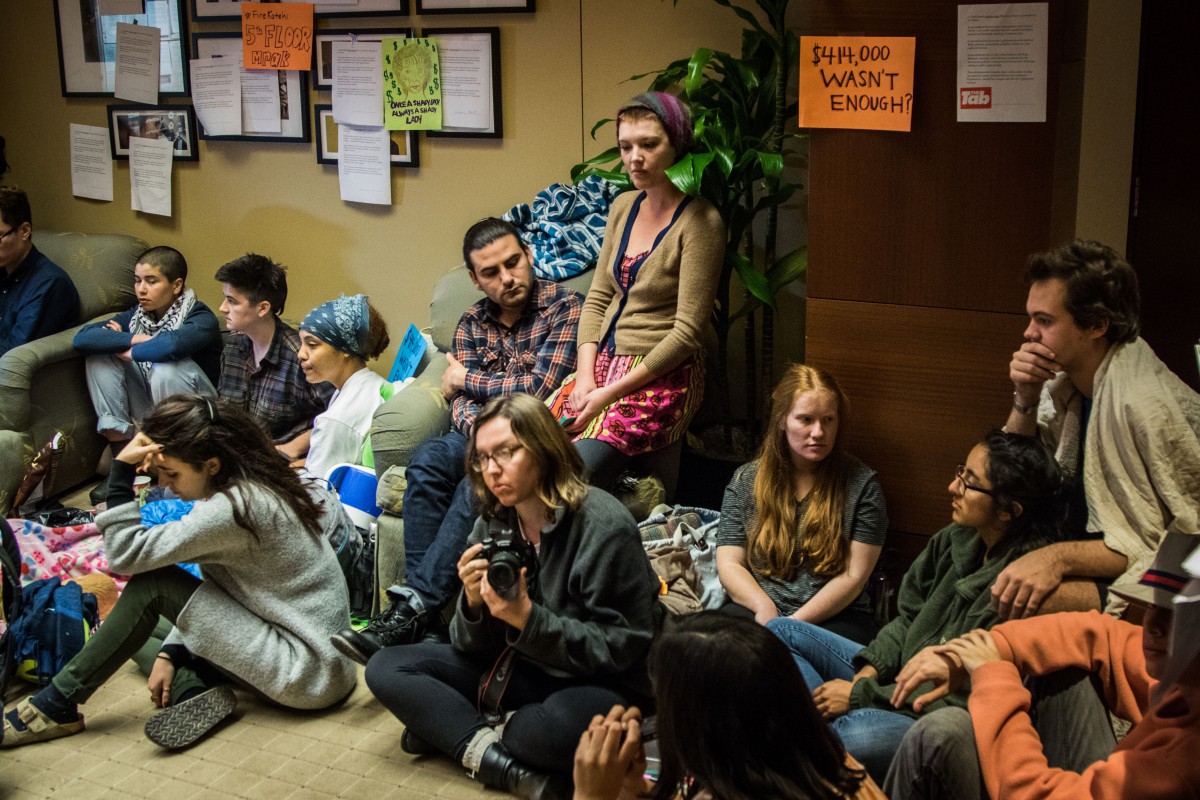 In addition, “We condemn the administration’s attempts to unfairly punish the students involved in the occupation through the inherently unjust and undue process of Student Judicial Affairs. No student should have to spend their finals week advocating for their educational system, nor should they be punished or threatened with academic probation, expulsion, or suspension for doing so.”

The letter concludes, “We join these students in their call for the resignation of Chancellor Katehi.”

Finally this morning, in a statement from ASUCD, “The representatives of The Associated Students of the University of California, Davis, (ASUCD) support our fellow students, currently occupying the 5th floor of Mrak Hall. Their actions have been selfless, especially amidst the duress of finals week. We urge Chancellor Katehi to release an in person statement as soon as possible and address the needs of those students currently occupying Mrak Hall. The mental health, study time, and overall safety of the occupying students has been compromised as a result of the Chancellor’s delay.”

In a statement from University Spokesperson Dana Topousis, it stated, “Chancellor Katehi respects the students’ rights of freedom of expression, and she encourages civil discourse.”

The Vanguard asked if the university would at some point initiate actions to remove the protesters from the building. Ms. Topousis stated, “Consistent with our normal practice, the students have been given a letter from a university administrator responsible for facilities notifying them of student code of conduct, and their need to comply with those standards.”

Police Chief Matt Carmichael did not return a call from the Vanguard on Monday morning.

The protesters told the Vanguard they are declining Chancellor Katehi’s invitation to meet because “we are not leaving until she resigns.” They also pointed out, “Anyone can schedule an appointment with the chancellor at any time. Obviously it doesn’t f-n’ work.”

For the student protesters, there is no outcome that works for them other than the chancellor resigning or being fired. And they vow to stay in Mrak Hall until that happens. 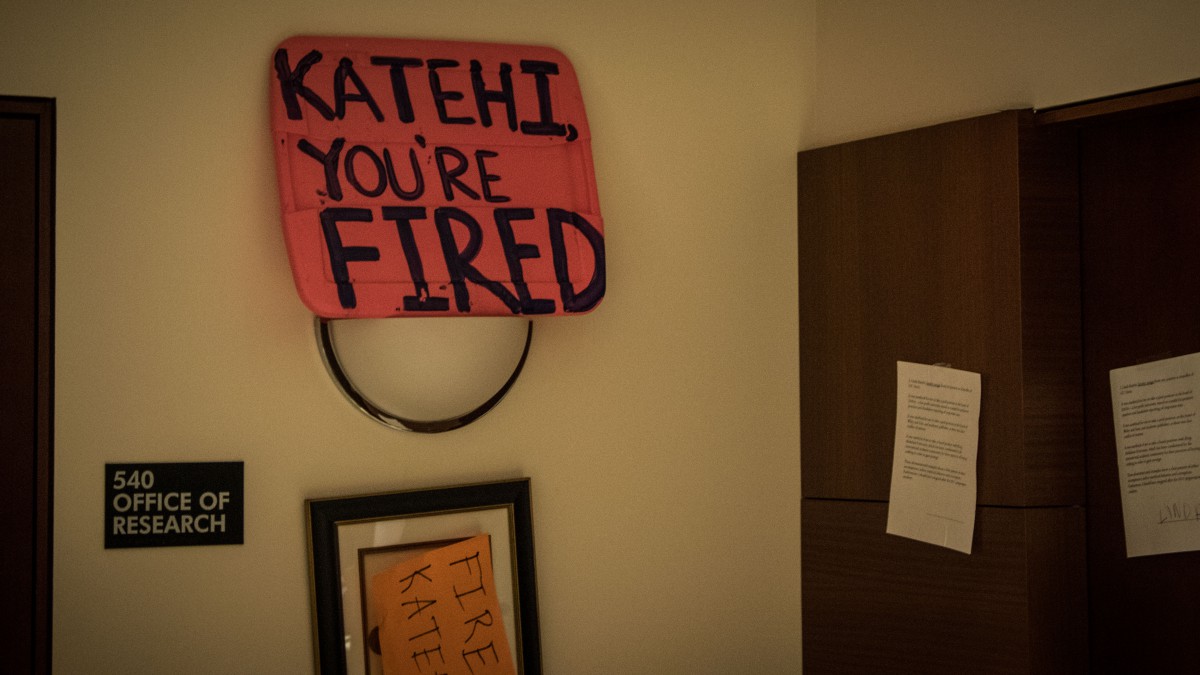 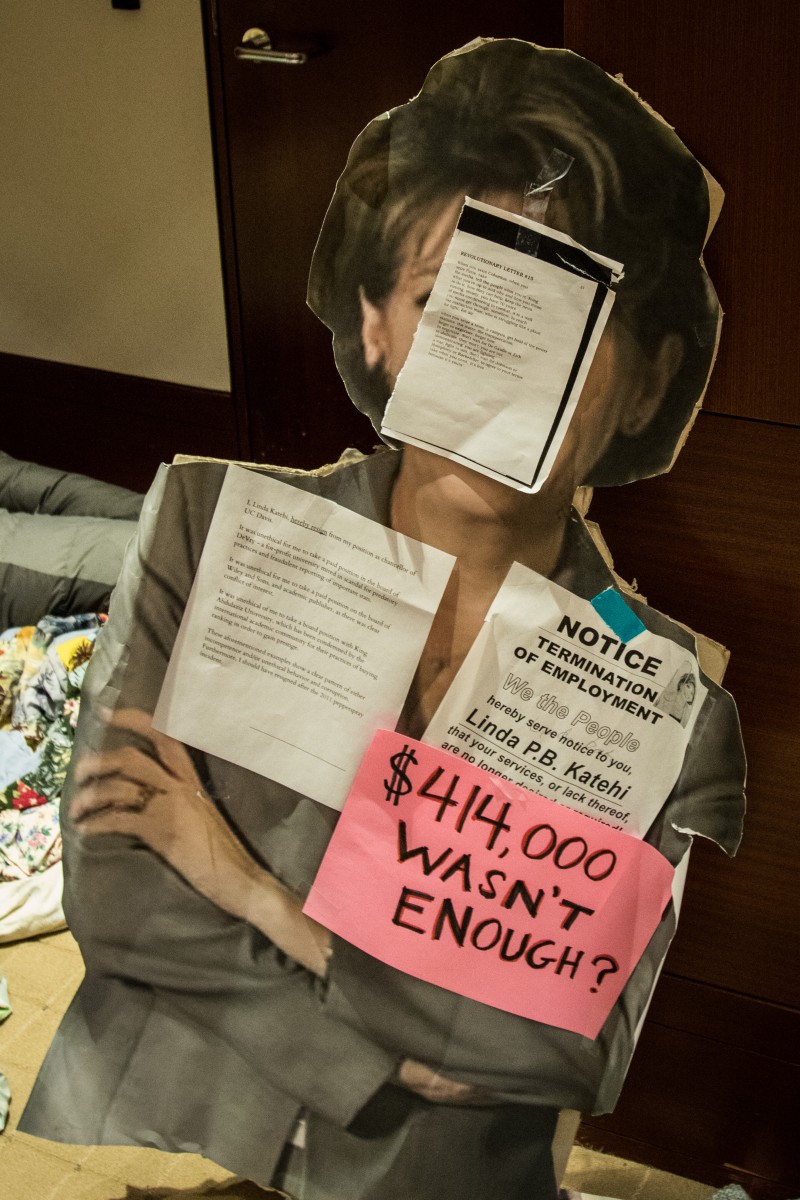 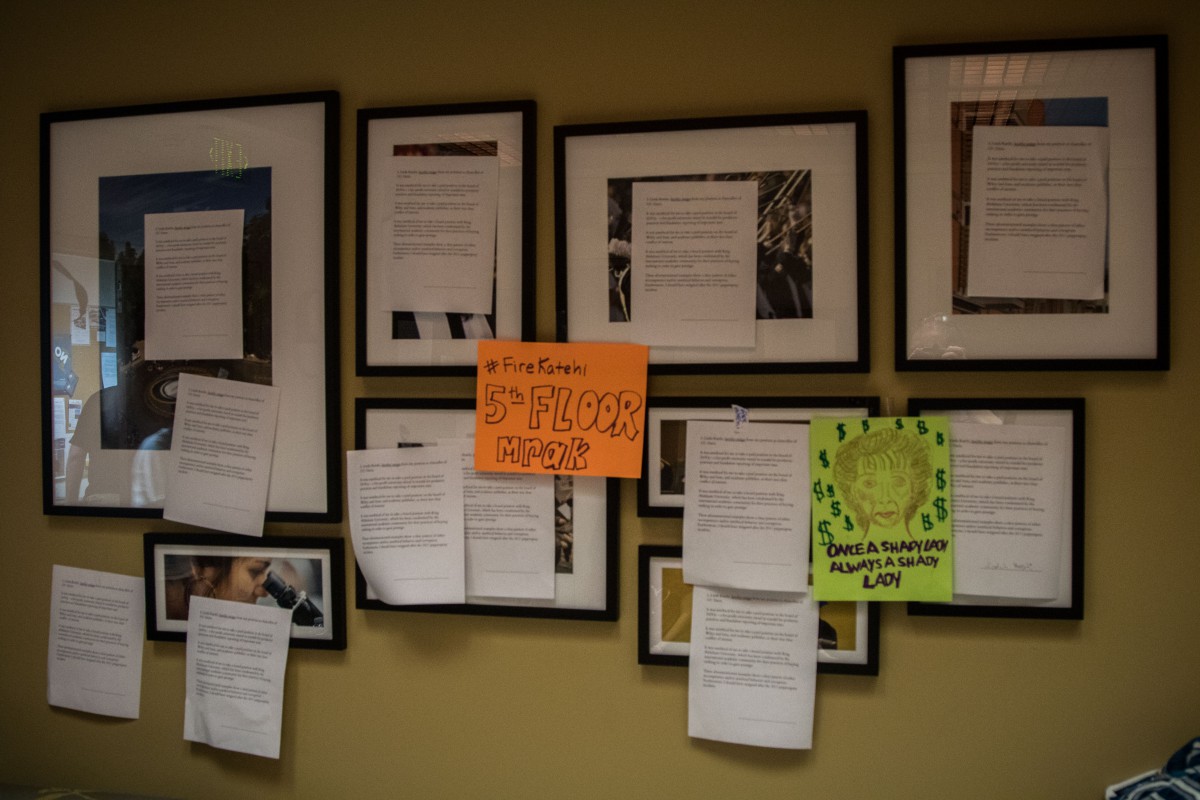