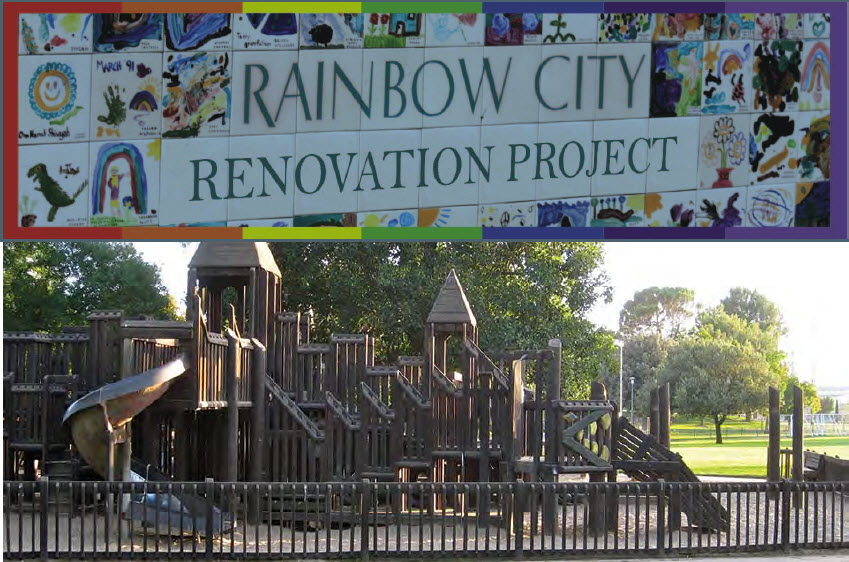 Sometimes in this business you have to be the bad guy in order to point out problematic governance. Everyone loves Rainbow City and the loss of it to this community obviously was a sore spot for many. However, in light of budgetary priorities, we have to question whether rebuilding a brand new Rainbow City at a cost of over $850,000 should have been the council’s priority.

Back in March, Mayor Dan Wolk, in his push for a $50 per year increase to the parks tax, pushed for Rainbow City Rehabilitation at $300,000. Councilmember Lucas Frerichs said he was willing to support a $50 parcel tax on parks while perhaps extending the existing tax.

Councilmember Rochelle Swanson said that she could not support just the parks tax as outlined. She suggested the possibility of a $100 parks and infrastructure tax which also would replace Measure D, absorbing what’s in the current parks tax. She said this would recognize that “we should have asked for more before (than the current $49).”

She added, “Some of the things that were listed (in the parks list of needs), I don’t feel they’re the top top priority.”

The council ultimately would not approve that expansion of the parks tax.  They originally moved toward a more expansive tax to deal with infrastructure before postponing it until the fall – at least.

And yet, there was the Rainbow City proposal – pulled off consent on Tuesday to give a presentation, but no hard questions. 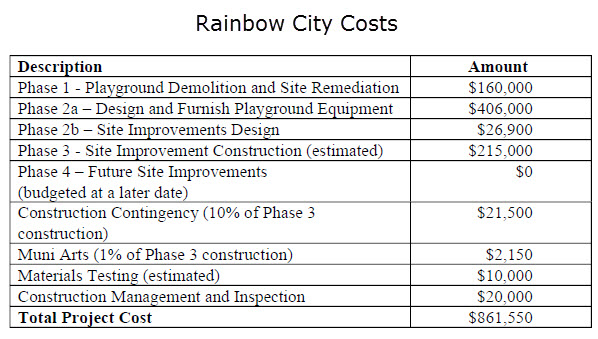 Where did the money come from?

Staff report notes, “The project has evolved from an original planned renovation to now include removal of the existing structure, environmental remediation and a complete rebuild of the entire play structure.”

According to them, “The estimated cost to complete the project is $861,550 with $60,000 reimbursable by insurance for a net cost of $801,550. Funds have already been spent on the community outreach pre-planning for the project with Siegfried. In addition to the existing funding sources of grant dollars and CDBG [Community Development Block Grant] dollars, the budget adjustment moves park impact fees from the Cannery and fees left over from previous certificates of participation (COP) through ABAG [Association of Bay Area Governments] 34. These funds were originally used for earlier park purchases/enhancements and the fund now has a balance of $384,122. The COPs were repaid in full in 2013, so staff is recommending the balance be returned to the Quimby Act fund and utilized to pay for a portion of the costs associated with the Rainbow City rebuild. The balance of necessary funds is recommended to come from the Cannery Park Fees. The Budget Adjustment reflects these proposed transfers.”

Here is the most interesting thing: “This project meets the City Council’s Goal 6 of funding, maintaining and improving the infrastructure of the city, however, the project was not specifically listed as an objective.”

No one wants to get caught in a battle against Rainbow City, but the reality here is that the council came up with a list of priorities in their planning session – a list that gets added to in a capricious way whenever it is convenient.

It is easy to blame this on Mayor Wolk. After all, he is the worst offender here of adding to council priorities after the fact. He has used his position as mayor to run for State Assembly, and being seen as family friendly is a major park of his plank.

A lot of people are torn up by the loss of a Davis-iconic play structure. As the city noted back in the fall of 2014, “Community volunteers built the Rainbow City play structure in 1991 as part of a community build project. Working together, the community provided design input and reached out to local children for their wishes and ideas.”

However, as the structure approached 25 years old, “the City began to engage the public to discuss renovation or replacement of the structure.  Residents expressed concern that the current structure timbers were treated with chromate copper arsenate (CCA) and may have leached metals into the soils in the playground area, thereby resulting in a risk to children who may use the future facility.”

The city received a consultant’s report “that indicates a minor historic release that includes higher levels of arsenic than would be normal for the area.  Releases of this nature do not pose an immediate risk or require an immediate response.”  However, “While the levels do not appear to have reached those that the United States Environmental Protection Agency (US EPA) would classify as hazardous, they do indicate a release to the environment and, over time, could pose a risk to human health based on long term exposure to the site.”

“As a child, I was part of the original build for this amazing play area. While it is disappointing to close the current area before a new structure is in place, it is the right thing to do to,” said Mayor Dan Wolk.  “I look forward to sharing the new play area with my children once it is complete.”

Again, who can argue with this?  My point here is to question the overall priorities of the city council. Six weeks ago the council couldn’t agree on a funding structure, but they had no problem coddling together funding for a new play structure.

The reality that the city faces is that we have a $655 million shortfall in needed money for infrastructure.

Matt Williams, once again, broke down how the $655 million was calculated. $200 million of that is for roads over 20 years. $352 million is buildings and parks. $114 million is for retiree pensions and health benefits.

He said that we are doing better on retiree health benefits and pensions, “but that’s only $114 million of the $655 million.” We have a parks tax, but the parks tax is “leaving us with $315 million worth of capital infrastructure maintenance that we’re going to have to do to the parks surfaces and buildings.”

He said, “These reports came from staff. They came in the last 120 days. We really do have to understand, what we have promised to ourselves.”

And now we hammered the council once again for prioritizing this project that they did not deem a priority when they hammered out their council goals last summer.

It is interesting that when Lucas Frerichs and Dan Wolk opposed the soda tax for the June ballot, they cited the fact that it was not prioritized by council. That is an accurate argument – however, the soda tax also emerged from a community group looking to tackle a specific problem. The soda tax would have generated revenue rather than cost the city over three-quarters of a million dollars that it would have to coddle together.

40 thoughts on “Sunday Commentary: Should Rainbow City Have Been the Priority?”