The annual report of Yolo County Health offers a fascinating glimpse into the physical, mental, emotional, and social health of the community. The report entitled “Community Health Status Assessment” utilizes ten years’ worth of data and makes comparative claims based on positive and negative trends in relation to public health. It is a comprehensive analysis of the issues, factors, and movement of health within Yolo County. 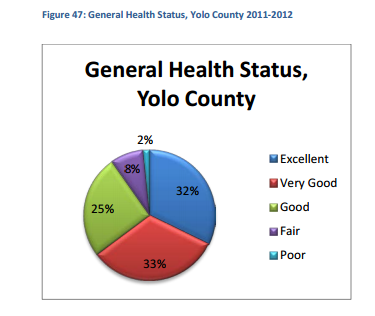 One interesting point to note is the near 25% increase in community population since the year 2000. Demographics show the racial makeup of Yolo County to be as follows: 67% white (5% more than the California average), 3% black (half the California average), 1% Native American, 13% Asian, 1% Pacific Islander, 10 % Other and 6% multiracial. A racial percentage by region visual illustrated that the dominant racial group in every locality was white. 21% of the total population are foreign born and 35% of Yolo County residents are bi/multi lingual- with Spanish being the most predominant second language for speakers. 20% of the population is living below the poverty level, of which Hispanics, Asians and African Americans are affected disproportionately. However, education was noted as a major factor in contributing to who lives in poverty. The report states “In Yolo County, 22% of those who do not have a high school education live in poverty.  Conversely, only 4% of those with a Bachelor’s degree or higher live in poverty.” 38% of those living in county lines hold a Bachelor’s degree, and high school graduates are more frequent in Yolo County in relation to the California average. Third grade reading proficiency was still lagging in standard, with economic disadvantage being shown as a major factor of influence. Math proficiency, however, continues to be slightly above average.

One large discrepancy between Yolo County and the state standard was the median value of owned homes, which was $56,100 lower than the California average. Another problematic indication was the realization that 43% of owners and 50% of renters spend over 30% of their income on housing costs – a statistic that the U.S. Department of Housing and Urban Development considers to be significantly burdening. Unemployment has enjoyed a gradual decline since its peak in 2010, although it is still slightly above the state average of 10%. Unemployment was found to be most common in West Sacramento (18%) and least common in Davis (7%). A high percentage of respondents (82%) considered themselves to be in good-to-excellent health in comparison with last year’s report, with (45%) of respondents suffered from a chronic health condition. Two-thirds of these respondents reported that their chronic conditions were under control, but a sizeable percentage (20%) indicated their chronic conditions were poorly managed.

The importance of mental and social health has become an increasingly important aspect of the medical gaze, and an important component of overall health status. In Yolo Co. almost one in four respondents felt they should see a mental health provider, but only two-thirds of those who desired treatment actually received services. Noted barriers to receiving treatment were cost (47%), not knowing how to locate providers (38%), and fear of others finding out (21%). Mental health related hospitalizations have become increasingly on the rise in current years, with the most affected population being those who struggle with drug dependency.

Mental health problems, mainly depression and suicide, stands out as a major issue, not just in Yolo County but for the United States as a whole. Aggravated mental health among youth continues to be a concern for the community, as unhealthy episodes in childhood and adolescence make an individual more susceptible for lasting problems in adulthood. An estimated 18% of Yolo Co. high school freshmen and 11% of high school juniors stated they had seriously considered attempting suicide in the past month.  These results are alarming and necessitate further research into background causes and effective prevention. However, the overall suicide rate in Yolo County has gone down since 2008. An averaged 64% of young people felt they had a sense of community and/or school connectedness, which is a large indicator for positive mental and social health.

Overall crime in Yolo Co. has gone down since 2008, with violent crime statistic remaining relatively static. Despite the downward trend, there has been an increase in strong-arm robberies.  Rape continues to be an ongoing problem in Davis and is the most common violent crime in the city, which comes in at over double the national average for rapes per 1,000 people. These statistics are conservative, given that most rapes go unreported.

Theft remains the most common crime. Overall arrest has gone down, although there is a disproportionate number of young Hispanic males brought into juvenile custody in West Sacramento and Woodland. Reported cases of child abuse have gone down despite the increase in the California average. However, only 20% of reported child abuses are found to be substantiated.

Prenatal care is enjoying an upward trend and Yolo County mothers came in at 20% over the California average for breastfeeding. Teen pregnancy, as well as low- birth weight deliveries, are also down from previous years.

While Yolo County accounts for a relatively low adult smoking rate (half the California average), it scores higher than state benchmarks amongst youth smokers and overall alcohol consumption. Marijuana use fell within 2% of the California average with the most predominant users being youths attending non-traditional schools (45%).

In healthy eating behaviors, 33% of adults got the recommended daily serving of fruit and vegetables, while healthy eating among children was far below the statewide estimate, 33% compared to 53%. Although fast food consumption has remained relatively static (with children being the highest consumers), the consumption of sugary beverages has more than doubled since 2007. The amount of residents who admit to having no physical activity in their daily life is below the state average, it is steadily increasing and currently rests at 17% inactive. The prevalence of overweight adults meets the state average of 35%, while obesity is well below the state average of 25% at a rate of 18%.

Albeit the statistics indicate that Yolo County residents exhibit good sexual health, the rate of Chlamydia (the most common STD) is on the rise. Important to note, however, is that chlamydia diagnoses among 10- to 14-year-olds have drastically fallen.  Gonorrhea cases have almost doubled since 2007, granted that it is still well below the state norm. The rate of HIV remains low (108 cases per 100,000 residents) in comparison to state averages but is slowly inching higher.

Asthma and lung disease cases remain higher that the state standard. Diabetes, heart disease and high blood pressure were lower. Mental disorders accounted for the highest number of overall hospitalizations in Yolo County.  The most common form of cancer in Yolo County is prostate, with almost twice as many cases as breast cancer, the second most common form.

Life expectancy is slightly below the state average, with resident males reaching 78 and resident females averaging 82. The mortality risk was calculated as approximately one death for every 153 persons per year, higher than the California ratio of 1:161. Males typically have a higher death rate than females; however, the female death rate in Yolo County compared to the state show a 10% increase and only a 2% increase for males. The death rate for American Indians in Yolo County is 97% higher than the state rate and the Hispanic/Latinos’ death rate is nearly 20% higher. Asians and Pacific Islanders have a death rate roughly 20% lower than the statewide death rate. The leading cause of death was found to be cancer (22%), diseases of the heart (20%), chronic lower respiratory diseases (8%), cerebrovascular diseases (7%), and Alzheimer’s disease (6%). 42% percent of deaths were premature, with the leading causes of premature death being cancer (29%), diseases of the circulatory system (22%), external causes of mortality, which include accidents, suicide, and homicide (15%), and diseases of the respiratory system (9%).

The chart below indicates the most common cause of death in Yolo County given a specific age range. 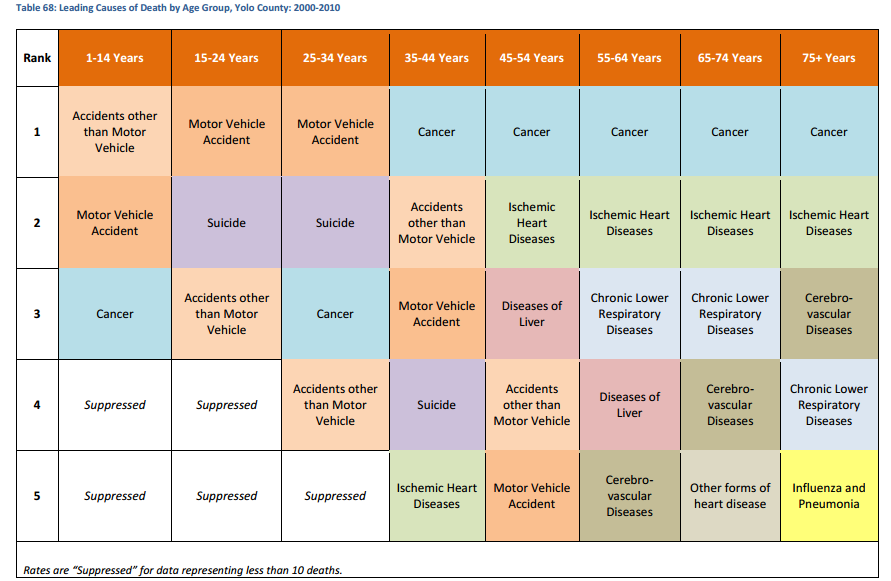 Share:
Tags:health careYolo County
Previous : Living in the Anthropocene – The Sixth Great Mass Extinction
Next : A Different Perspective on the Chancellor

One thought on “Yolo County Health Assessment in Review”