Wednesday was a tumultuous day, with rumors and innuendo flying around.  But at 9:30 p.m. an email from Academic Senate Chair André Knoesen finally broke the news to many in the UC Davis community, with a statement from the UC Office of the President and President Janet Napolitano stating that there was a formal investigation and that Chancellor Katehi was being put on administrative leave.

The statement began, “Information has recently come to light that raises serious questions about whether Chancellor Katehi may have violated several University of California policies, including questions about the campus’s employment and compensation of some of the chancellor’s immediate family members, the veracity of the chancellor’s accounts of her involvement in contracts related to managing both the campus’s and her personal reputation on social media, and the potential improper use of student fees.”

It continued, “The serious and troubling nature of these questions, as well as the initial evidence, requires a rigorous and transparent investigation.  As such, President Napolitano will  appoint an independent, outside investigator to conduct the investigation and submit a report, before the start of the 2016-17 academic year.”

It concluded, “The president, with the support of the leadership of the Board of Regents, has determined it is in the best interest of UC Davis that Chancellor Katehi be placed on investigatory administrative leave from her position as chancellor pending the outcome of this investigation.  Pursuant to an existing delegation of authority, UC Davis Provost Ralph Hexter will fill the chancellor role on an acting basis.”

“I am deeply disappointed to take this action,” said President Napolitano. “But Davis is a strong campus, nationally and internationally renowned in many academic disciplines.  I’m confident of the campus’s continued ability to thrive and serve California students and the Davis community.”

“Tonight’s action is disappointing, unprecedented and, based on the facts, entirely unjustified.  Since the day she was hired, the chancellor has given her unwavering devotion to fulfilling the fundamental public mission of UC Davis and doing everything the UC President and Board of Regents have asked her to.

“By any measure — and according to numerous voices throughout the Davis and Sacramento communities — her leadership has helped put the university on a path to globally recognized excellence and historic diversity. More Californians than ever before — including more women and more students of color — are receiving a world-class education at UC Davis under her stewardship.

“This smacks of scapegoating and a rush to judgment driven purely by political optics, not the best interests of the university or the UC system as a whole.  The Chancellor welcomes an independent, objective investigation and a full release of all relevant documents and public records.  Make no mistake: we intend to vigorously defend Linda’s professional reputation and her standing as Chancellor of the university she loves.”

The rumors started late on Tuesday and were widely reported in the news. However, they seemed to be put to rest when the chancellor issued a statement at around 11:45 a.m. to a council of upper administration persons, one of whom was the head of the Academic Senate, indicating, it would have seemed, that she had no interest in resigning.

She said, “This email is to let you know that I am 100 percent committed to serving as Chancellor of UC Davis.  I sincerely appreciate the strong outpouring of support I continue to receive from the campus community and I very much look forward to continuing to lead the campus to greater levels of success and excellence in the future.”

That email from Katehi was then forwarded to the entire Academic Senate and to the Federation, which is all staff, by André Knoesen.

But, clearly, some members of the Academic Senate, some of whom had remained supportive of the chancellor, had caught wind something was up. An essentially break away group, led in part by Suad Joseph, responded.

They sent Janet Napolitano a letter on Wednesday with 350 faculty signatures stating, “We have come to understand that you have called upon UC Davis Chancellor Linda P. B. Katehi to resign.  We strongly oppose this peremptory action carried out without any consultation with the Academic Senate or the UC Davis administrative leadership.”

They add, “We believe that the tenure of the Chancellor is a matter of profound importance to the campus.  The concerns of faculty, staff and students are being actively addressed by Chancellor Katehi.  She is working collaboratively with faculty, students and administration to address all relevant issues.  It is of critical importance to the vibrancy of this university that this process be allowed to continue.  We have full confidence that this will lead to an even healthier, more transparent and robust UC Davis.”

(Update)  Another faculty group has sent a letter to President Napolitano with the opposite message, “We the undersigned, faculty of UC Davis, wish to state that the petitions circulating in support of the chancellor do not reflect the will of the faculty as a whole. Those who have not signed either do not agree with these petitions of support, or are reserving judgment. The latter find such petitions of support to be premature until the faculty meet and discuss the matter at the upcoming special session of our Representative Assembly.”

ASUCD President Alex Lee issued a statement just before 11 p.m.  He said, “We received news this evening that Chancellor Katehi has been placed on investigatory administrative leave. UC President Janet Napolitano cited claims that Katehi may have violated multiple UC policies. This disturbing news comes after weeks of activity from the Fire Katehi movement and follows the alarming news that our University spent over $175,000 to improve its search engine results.”

He continued, “Students were anxious earlier today when rumors circulated that Katehi had been asked to resign. It is unknown now if Chancellor Katehi will be returning to UC Davis. In the meantime we will be working with Provost Hexter as acting chancellor to ensure that the push for accountability, transparency, and student driven changes are not lost.”

“News of the Chancellor becomes increasingly upsetting since scandal broke surrounding her board positions with DeVry University and John Wiley and Sons. The Chancellor has a long history of turning an eye on student needs, seen from the Pepper Spray Incident in 2011 and continuing to this year when the Chancellor ignored demands from the students involved with Fire Katehi movement,” he said. “If the Chancellor has indeed been violating University of California policy, then that is an act this office cannot overlook. If the University of California Office of the President finds Katehi guilty of these charges, we will strongly urge for her resignation.”

He concludes, “In the middle of this transitionary time at UC Davis, the ASUCD Executive Branch confirms its respect for the student voice and dedication to leadership. We await further news about the future of Chancellor Katehi’s service to UC Davis and will remain as always insistent that the voices of students are heard in administrative decision-making.”

The ACUSD has previously issued a statement supporting the protesters at Mrak and the UC Student Association last week issued a no-confidence vote in the chancellor.

Meanwhile, the Mrak protesters held a different sort of protest at the MU Quad, in which they “aired Chancellor Katehi’s laundry.” 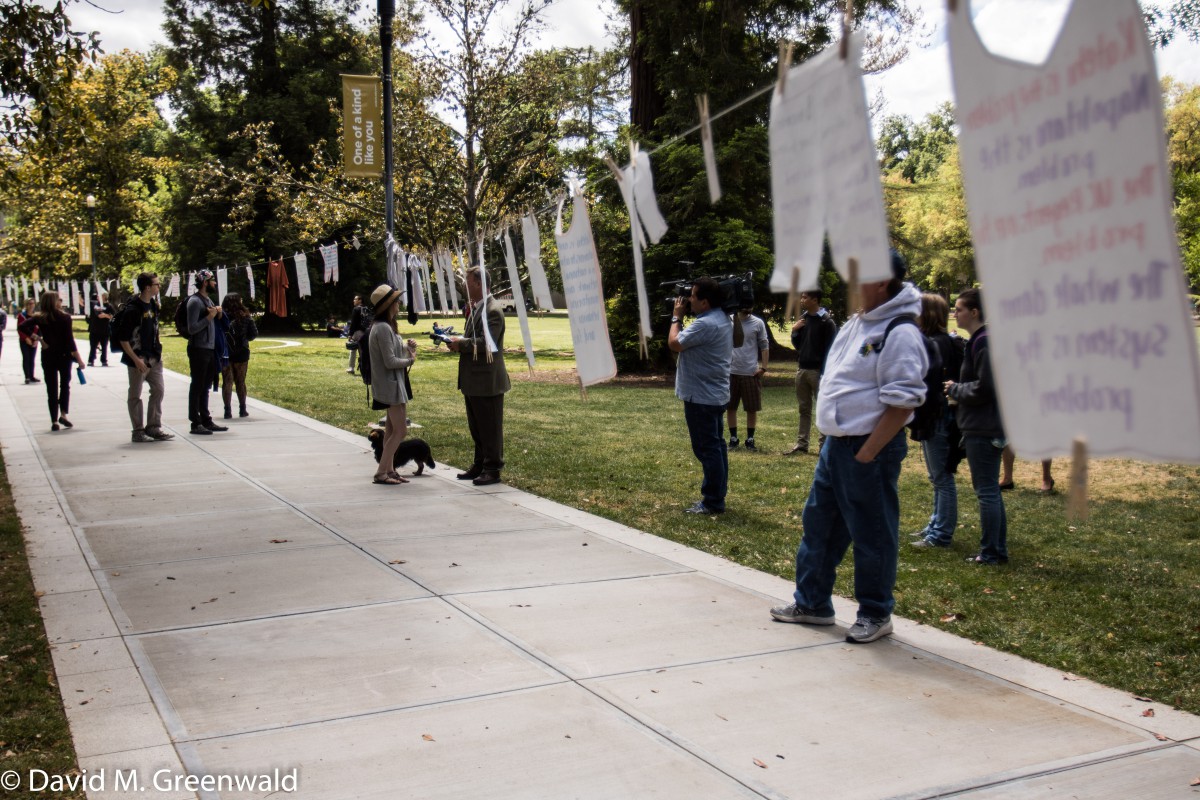 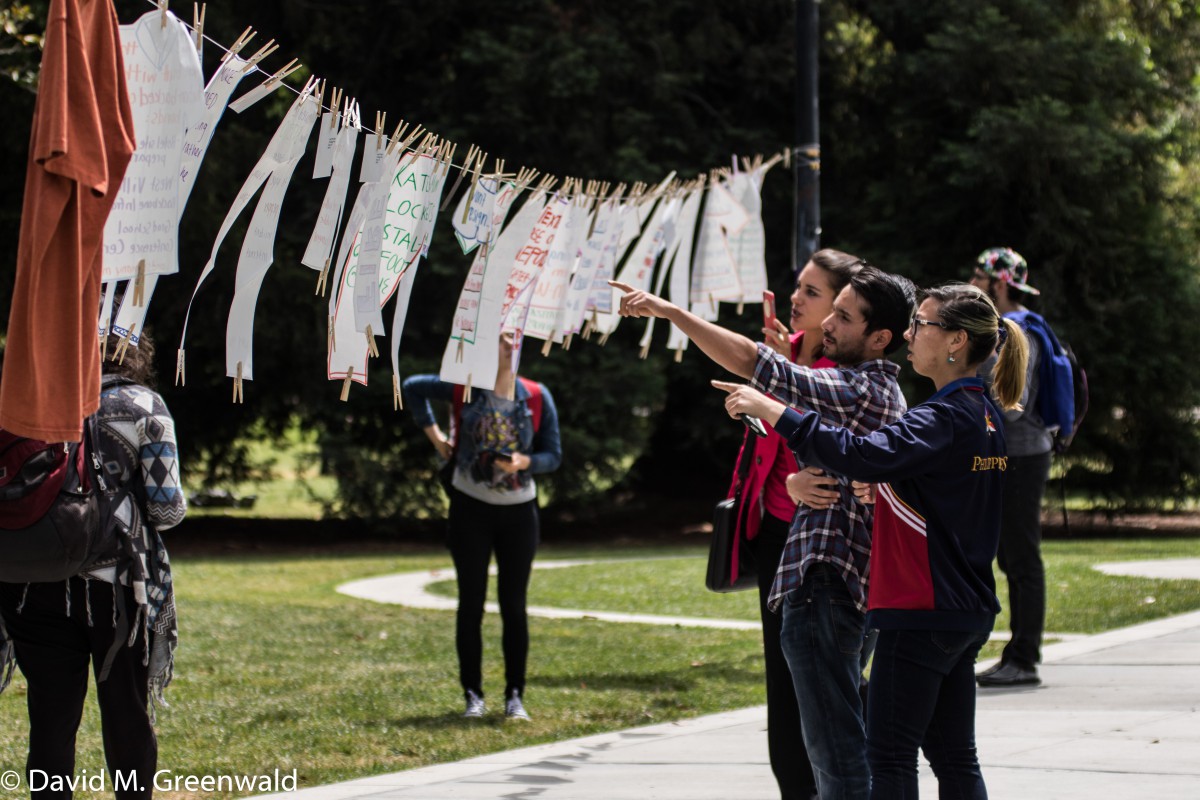 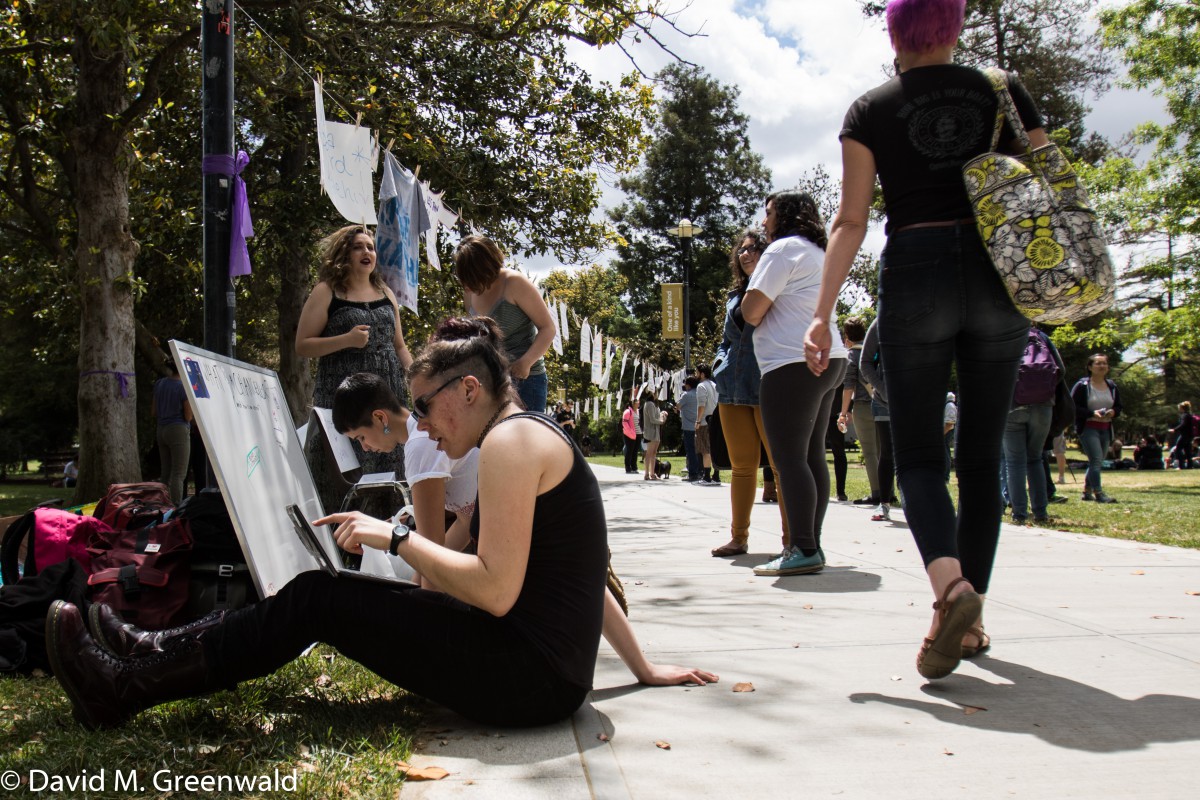 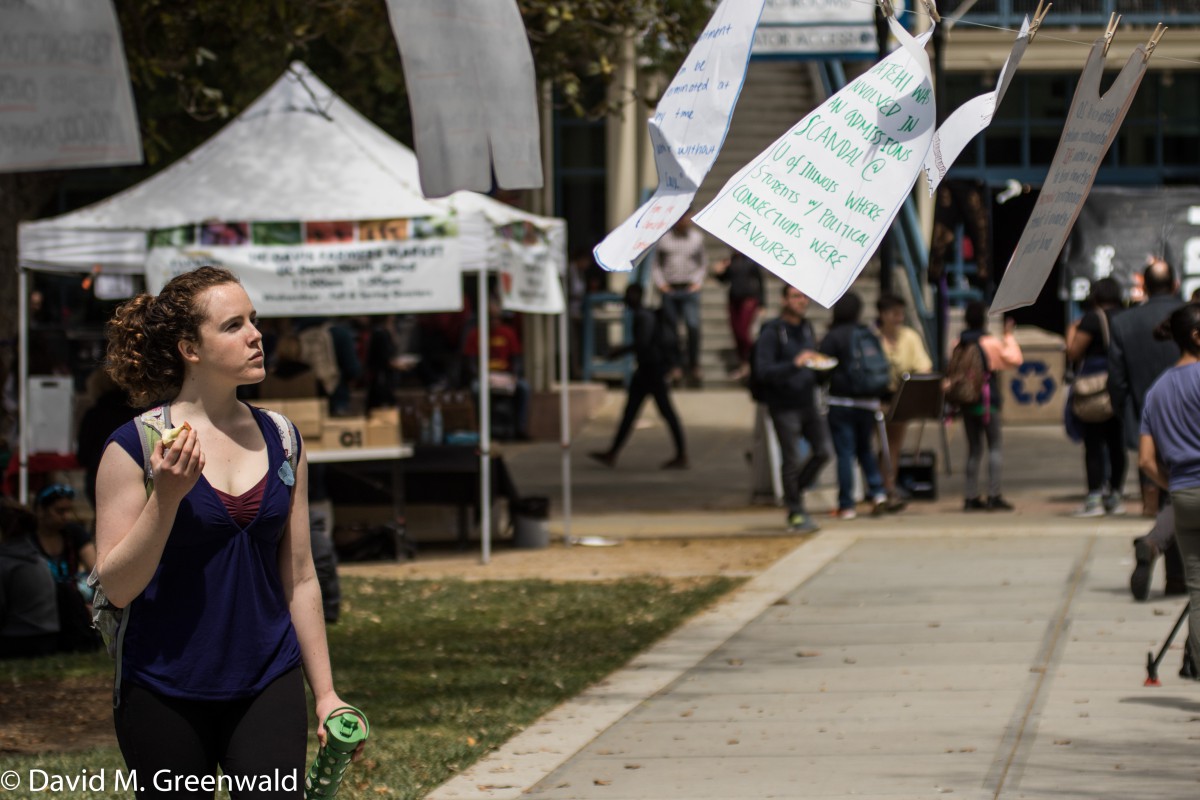 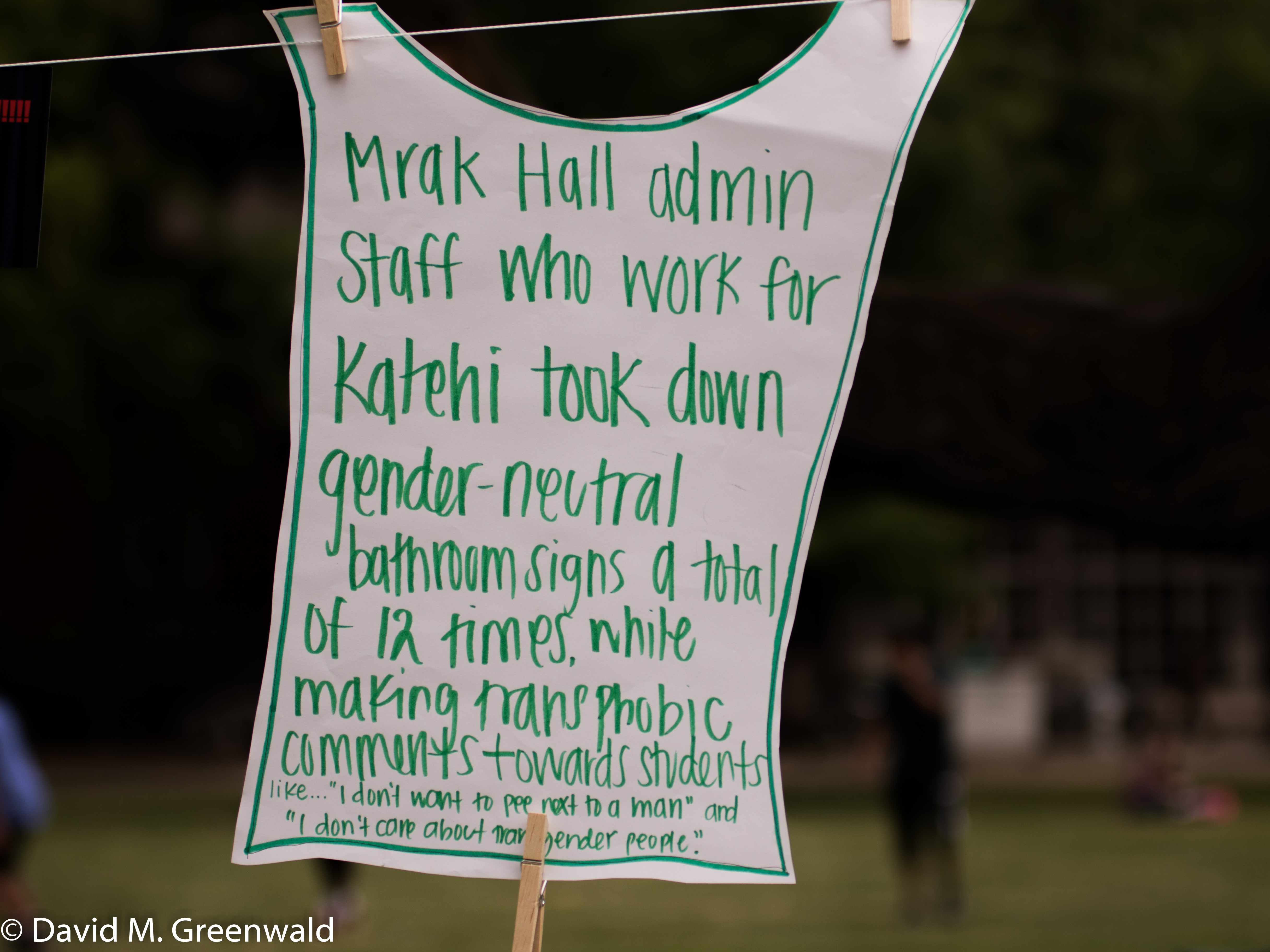 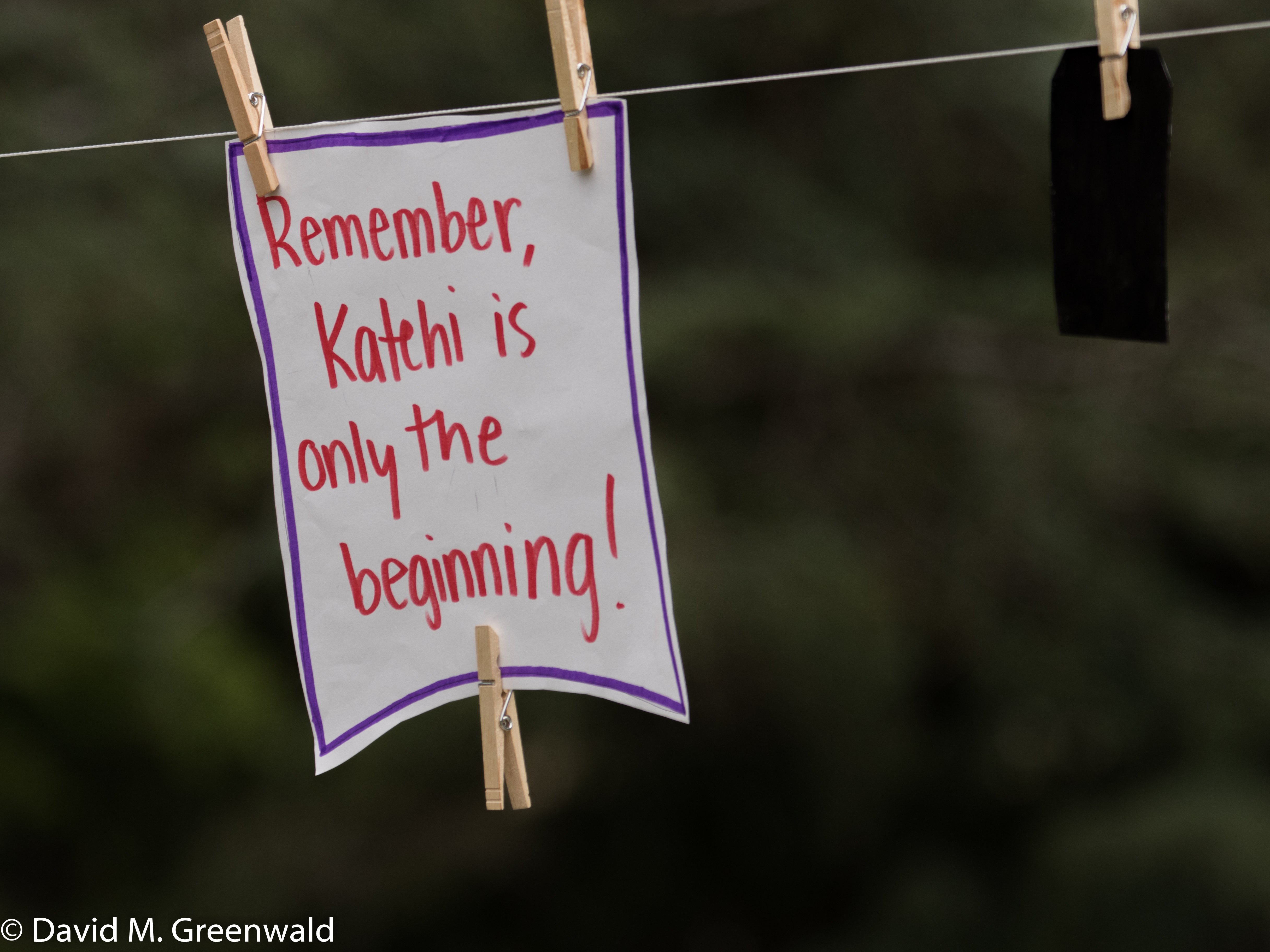 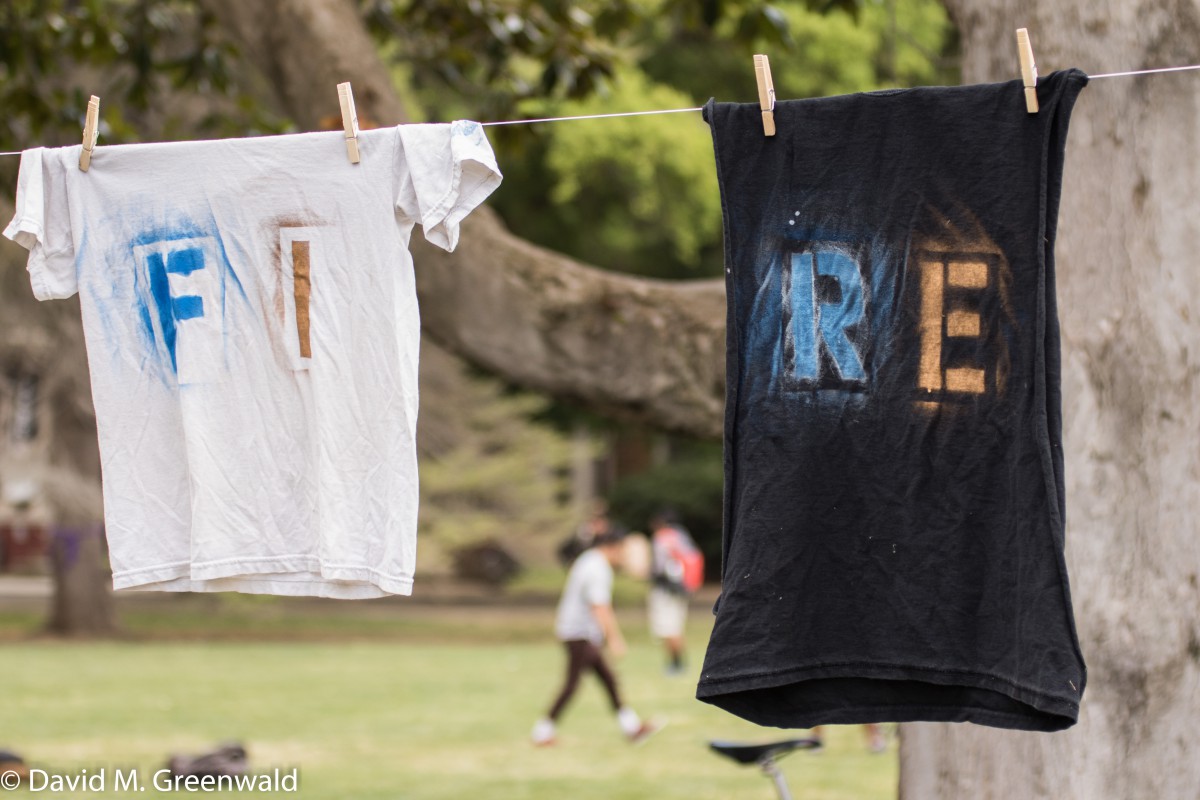 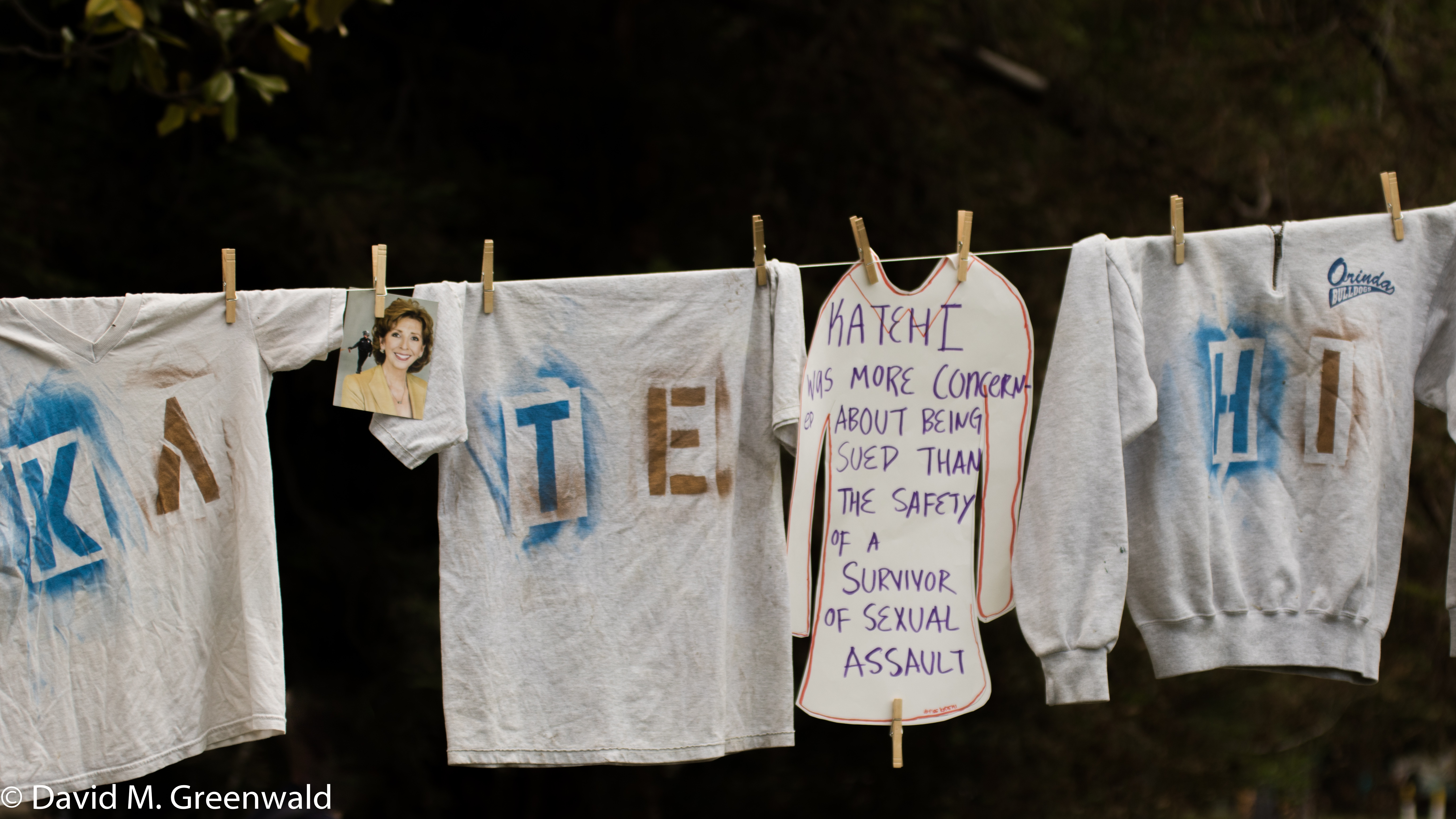 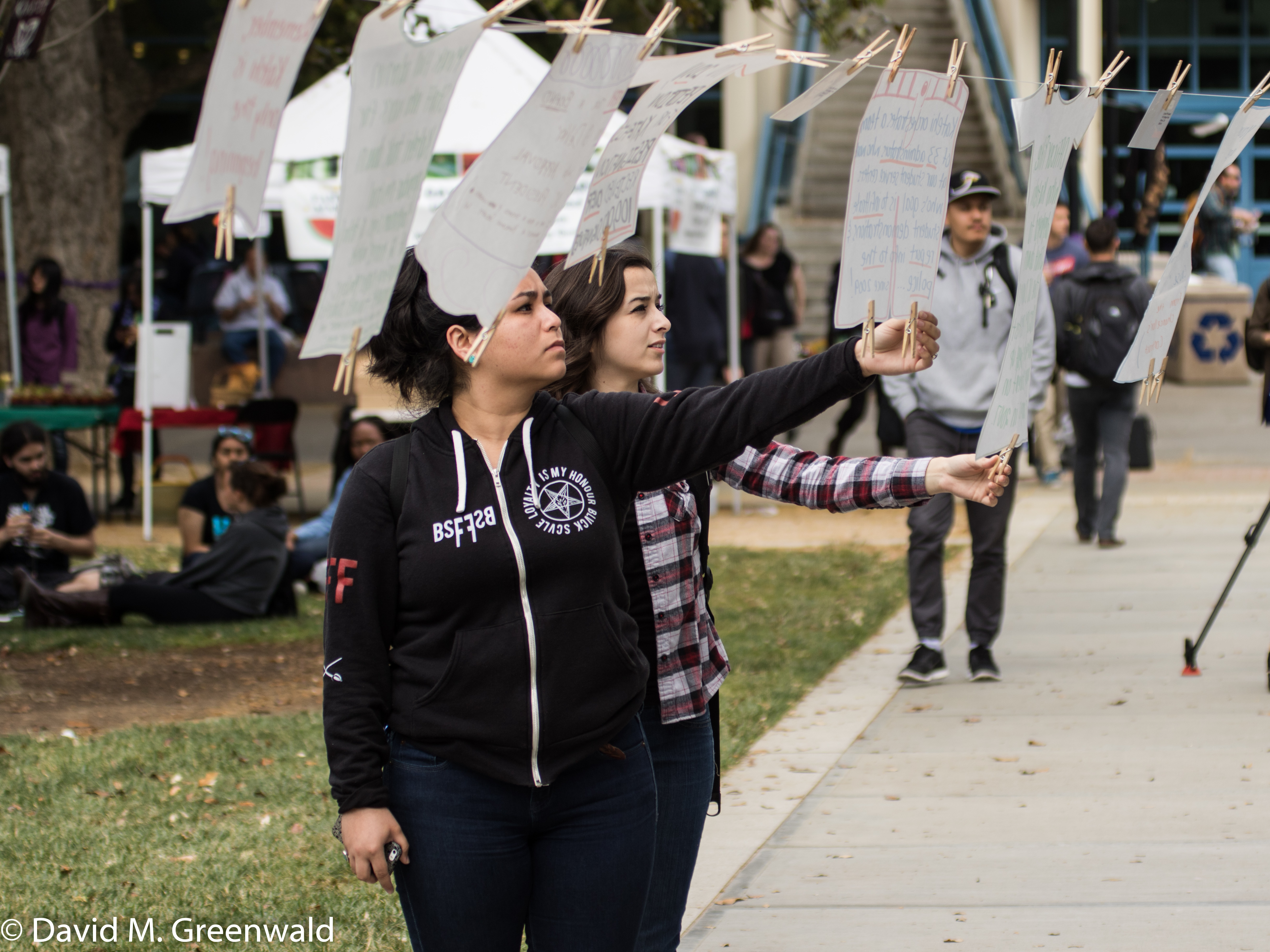 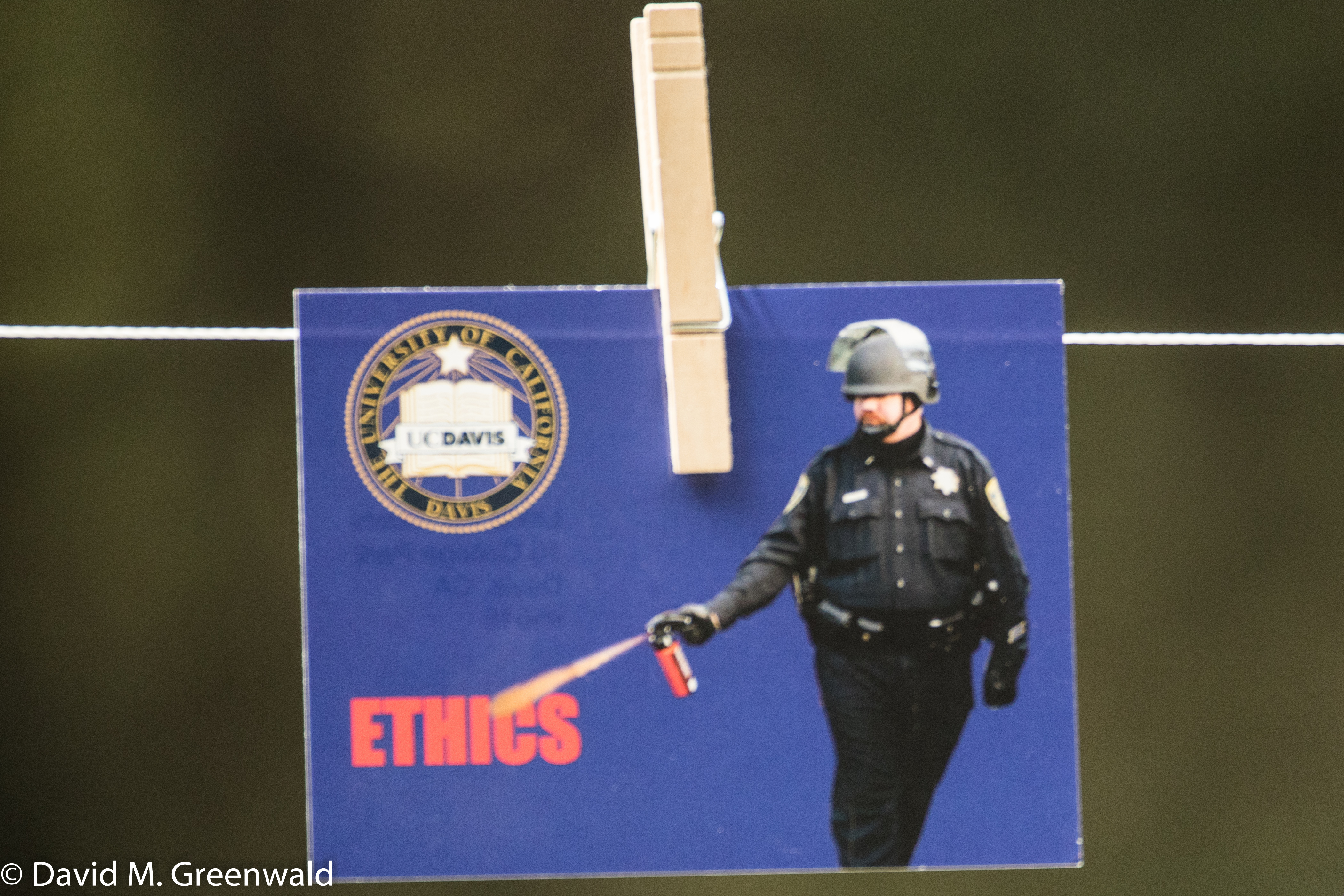 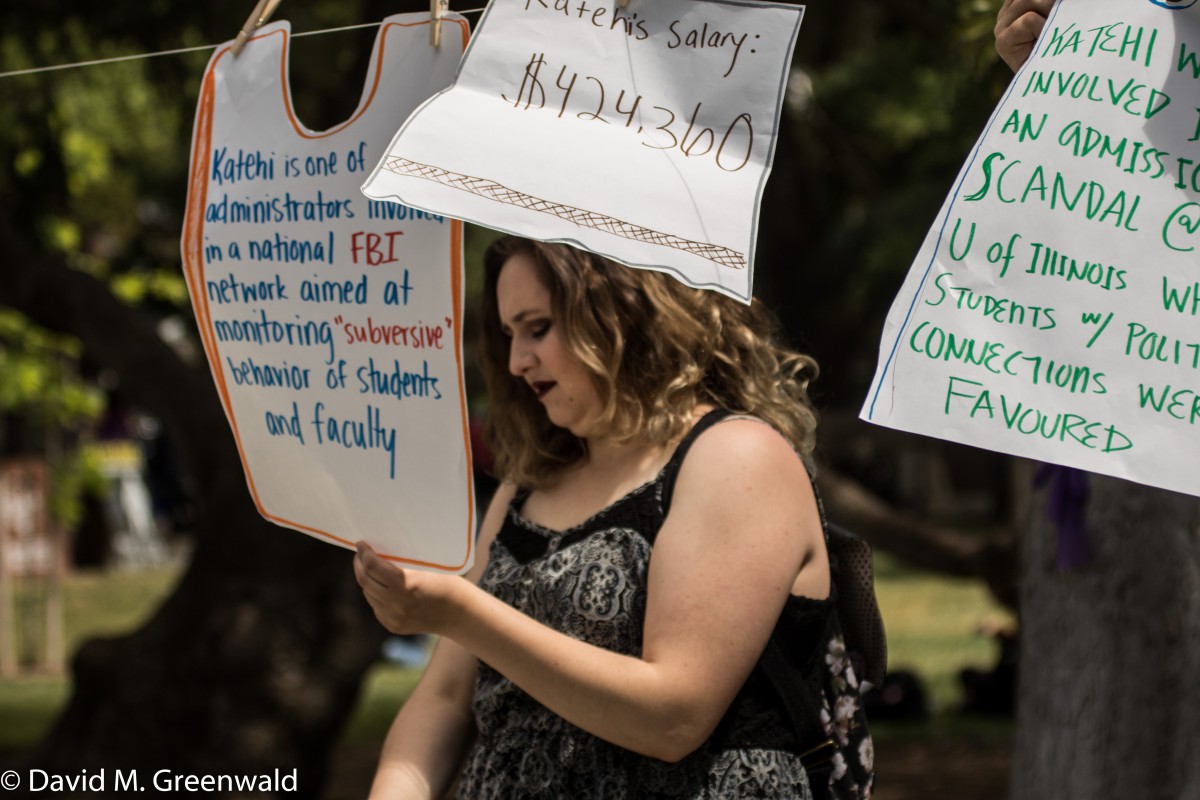 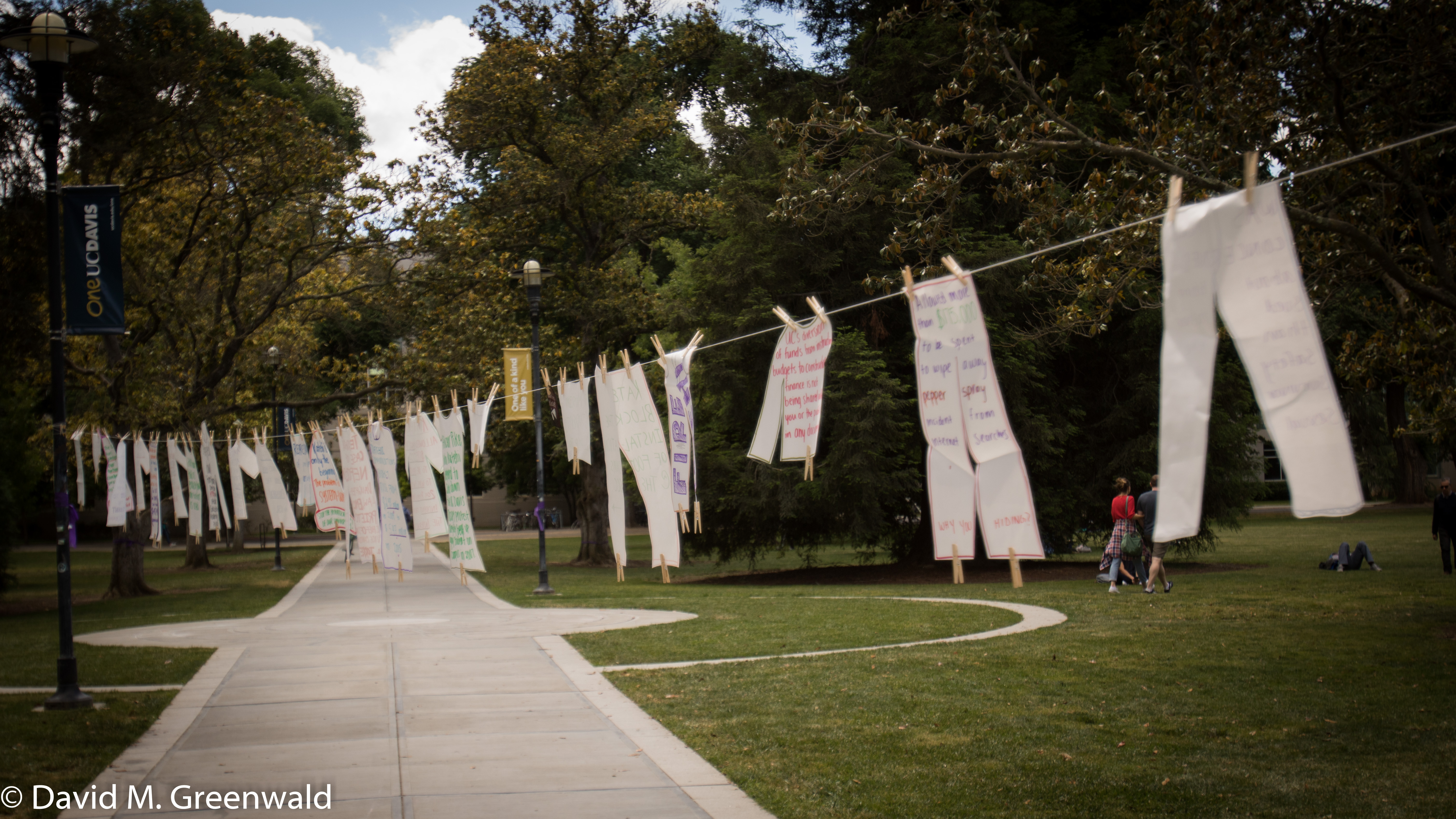 Share:
Tags:Academic SenateASUCDJanet NapolitanoLinda KatehiProtestersUC DavisUCOP
Previous : Councilmember Swanson Issues Blunt Statements on the Future at Measure A Kickoff Event
Next : Nishi Project’s Fiscal Benefits Extend to the City of Davis and Beyond

50 thoughts on “Chancellor Katehi Now on the Brink (Update)”