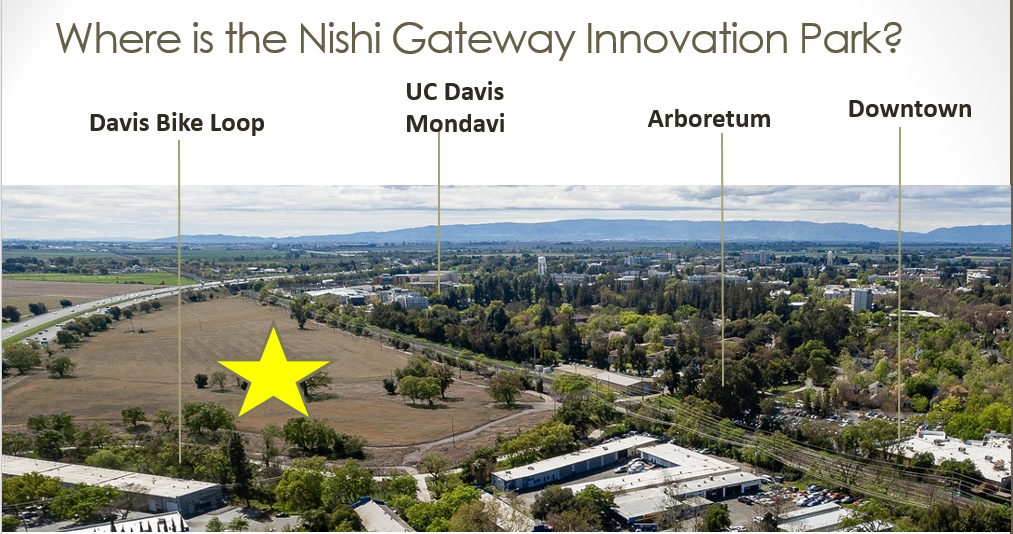 The proposed Nishi Gateway Innovation Park is a walkable live-work community located between the UC Davis Mondavi Center, the Arboretum, Downtown Davis, and the Davis Bike Loop. Nishi Gateway will create over 1,500 local jobs, provide a link for UC Davis technology transfer to local businesses, and provide housing for students, seniors & working families close to downtown. Yes on Measure A will also provide several significant circulation and safety improvements including a new road to campus, a new Richards interchange, and funding for city services and Davis schools – without raising taxes.

Many people ask: What was the process that enabled the project to get the unanimous support of the Davis City Council and a 5-0 vote to place the Nishi Gateway project on the June 7 ballot as Measure A?

It began eight years ago, when the City’s Housing Element Steering Committee determined that Nishi was one of the top infill sites in the City. But the main catalyst can be traced to two ideas that emerged simultaneously. First, in 2011, the UC Davis Chancellor put out a request for innovation centers proposals throughout California. Second, the City adopted the recommendations of the innovation park task force that named the Nishi site as the City’s top priority for economic development.

Next, a broad coalition from the Davis community and region came together and submitted the Nishi project to the State of California’s Strategic Growth Council for a sustainability grant award. This grant request from the City, with UCD and Yolo County as partners, ultimately led to recognition by the Strategic Growth Council as California’s top-rated project for sustainable design and innovation.  That application was supported by diverse community leaders and organizations including Chancellor Linda Katehi, Vice Chancellor John Meyer, UCD Urban Land Use and Transportation Center, the UCD Center for Regional Change, Yolo County Supervisors Don Saylor and Jim Provenza, the Sacramento Area Council of Governments (SACOG) , Yolo-Solano Air Quality Control Board, Unitrans, Davis Chamber of Commerce, Davis Downtown Business Association, and the Local Government Commission among others.

The June 2014 press release on the Strategic Growth Council award underscores the significance of the project as the City’s application won the highest score of the 66 applications submitted from across California. In announcing the award, the State of California Strategic Growth Council then underscored, “The City, in collaboration with UC Davis and Yolo County, is embarking on a community-based planning process for Nishi… as a walkable/bikeable, mixed-use district including university-related research park development complemented by high density urban housing and integrated into the UC Davis campus and downtown.”

In February 2016, after placing the project on the ballot, the City, together with the campus, submitted an application for the State of California EPIC Challenge Grant: Accelerating the Deployment of Advanced Energy Communities. With Nishi’s Baseline Project Features including 4.9mw of solar power, buildings 30% more efficient that current codes, LEED neighborhood design and buildings, and 80% bike ridership, the project will place our community at the forefront of sustainable strategies to combat climate change in California and beyond.

Nishi Gateway is the result of eight years of creative thinking to deliver a project that is designed for Davis and an exemplary model for sustainable infill development and community collaboration. By voting Yes on Measure A, this community based plan delivers on the needs of the city and helps support a vibrant Davis Downtown.

Tim Ruff, is General Partner of the Nishi property.  He is a 33-year resident of Davis and UCD graduate. You can reach him at tim.ruff@outlook.com.

62 thoughts on “A Community-based Model for Sustainability, Infill, and Economic Development”