On Saturday morning, between 40 and 50 people held a protest on Jefferson Boulevard, near the West Sacramento Police Station, protesting the Yolo County DA and West Sacramento’s continued use of the gang injunction, which the protesters and other residents say is tearing the community apart.

“Friends and family members can no longer go to family barbecues or attend each other’s children’s birthday parties,” said a community activist. “They can’t go to the movies together, they can’t attend night school because classes get out after the curfew. This injunction harms the quality of life of our community.”

Activists believe that the gang injunction is responsible for four juveniles to be detained in custody for over a year without due process of law.

On Saturday, they announced a plan to further legally challenge the West Sacramento Gang Injunction, which was implemented in early 2011 following a lengthy trial.  Appeals are still pending for the legal challenge at the appellate level.

They are calling for an independent investigation of WSPD gang officer, Anthony Herrera, for lying during testimony.  They are also demanding the “Yolo County DA stop filing gang enhancement penalty charges against ALL Latinos in Yolo County.” 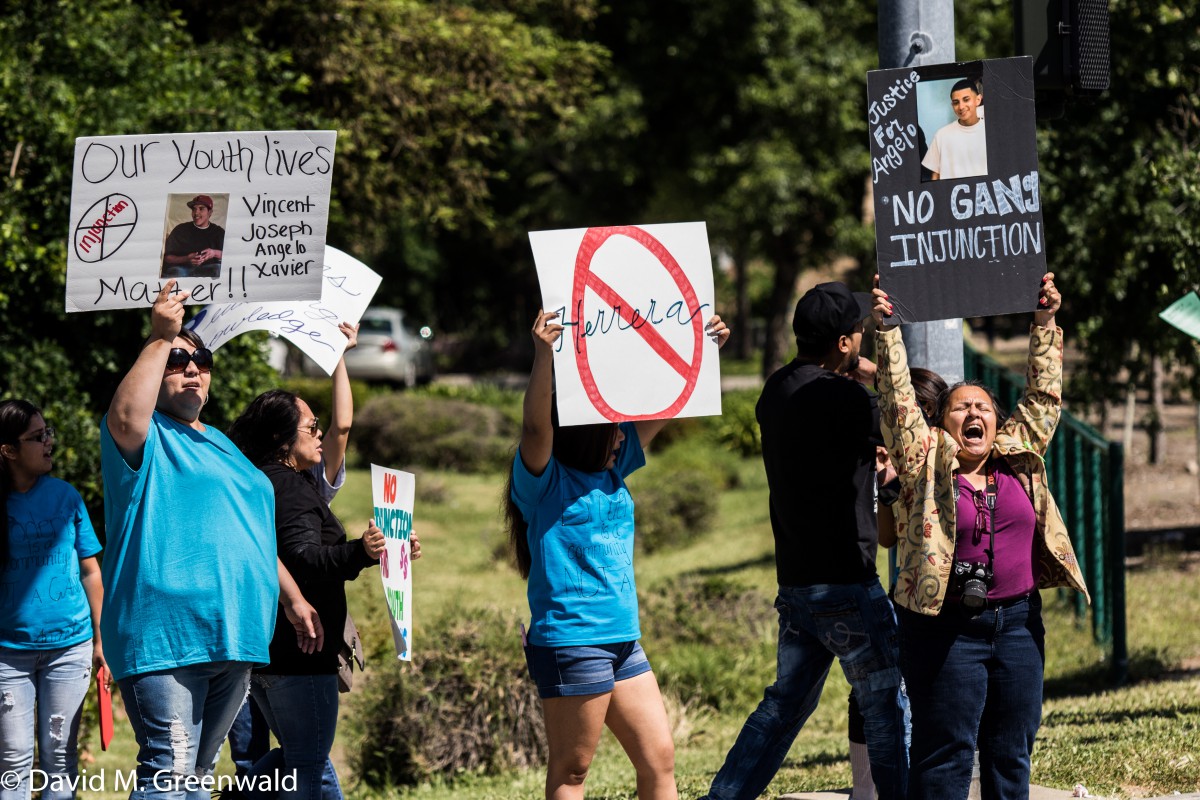 The case that has driven some of this renewed questioning involves four juveniles: Angelo Christiano Yabes, 14; Joseph Gomez, 15; Vincent Xavier Perez, 16; and Xavier Patrick Westford, 17. In June of 2015 they were detained, and accused of three separate robberies of pizza delivery drivers – despite statements from all the drivers indicating they could not identify who assaulted them. The district attorney has recharged them as adults and under gang enhancements failed to show a case, causing all charges to be dropped and then refiled.

On April 7, 2016, the DA reportedly refiled the case, this time using a grand jury to gain indictments and try the youths as adults.

Local resident Maria Grijalva helped organize the protest on Saturday. She told the Vanguard, “The reason we have organized today is because we have four major issues that are going on here.”  She explained that “one is the gang injunction – it has been going on for many years and there are officially no gangs in West Sacramento.”

“The second reason that we’re here is because we have four boys, four minors that have been detained in jail without due process for over a year,” she said.  She said, while the charges have not stuck, “the DA keeps trying one thing after another to keep these boys in jail.”

Ms. Grijalva further noted, “In Yolo County, we have the highest direct filing rate of gang enhancement charges against our youth, so this means our youth are getting charged with life sentences when they do not merit that.”

Finally, she noted that gang officer Anthony Herrera “is making $150,000 to generate and document and criminalize our youth and send them in jail.”  She said, “He has falsified information, the public defender has called him on it while in trial and he also falsified information during the Gomez case with these four youths.”

The Vanguard also spoke with each of the mothers.

Gloria Garcia, mother of 14-year-old Angelo Yabes, told the Vanguard, “We’re out here because there’s four mothers and our sons are on a four co-defendant case.  They are all juveniles, they were direct-filed into the court by the district attorney.”

She explained that, during their preliminary hearing, the judge dropped them back to a juvenile case, because “they took away the gang enhancement because they did find… lack of evidence to prosecute them on that charge.” 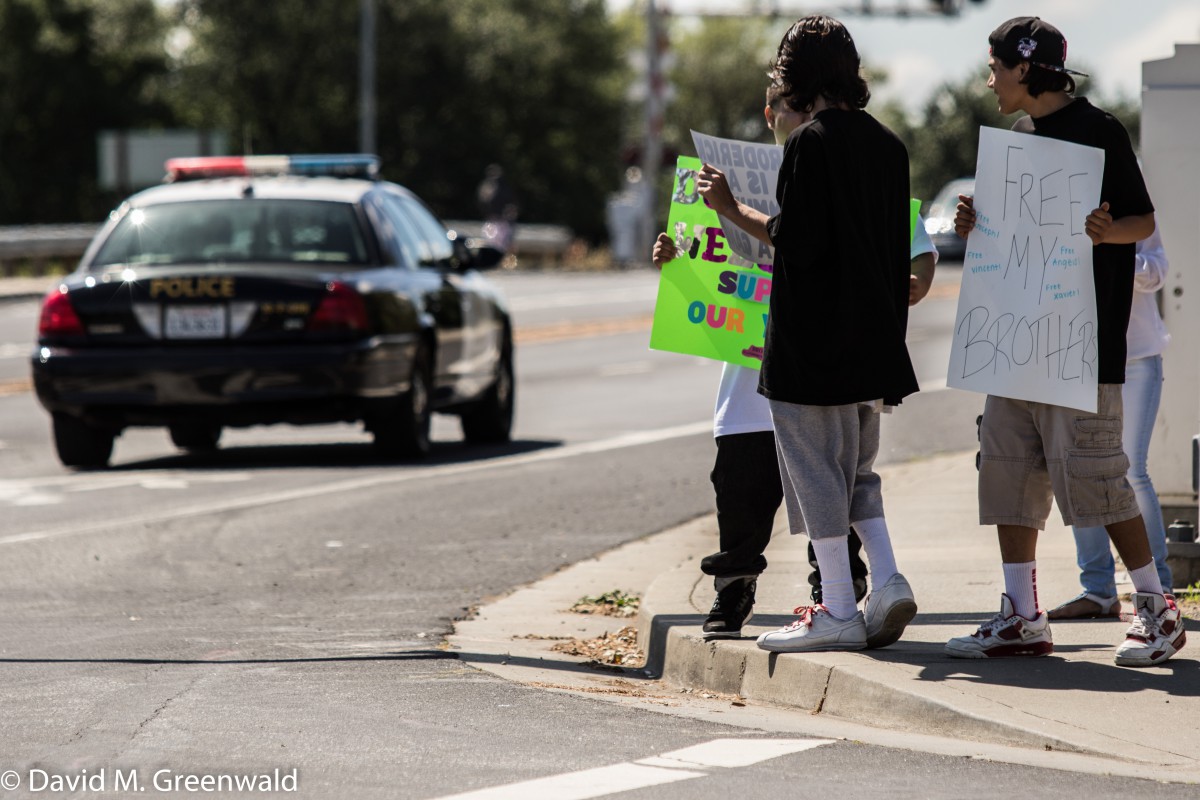 “(The DA) decided that he didn’t want to take the boys back to court, and take the chance of having the judge making the same ‘mistake’ so what he did was take it to a grand jury and indicted our boys,” Ms. Garcia explained.

“We’re just out here standing for our kids,” she said. “Instead of rehabilitating our boys, they are sending them away for life. All of our youth in this community especially.”

Tara Westford, mother of now 18-year-old Xavier Westford, said that her son celebrated his 18th birthday in custody at juvenile hall.  He was brought in allegedly on gang charges.  In May, he will have been in custody for a year.  The case has already been dismissed and refiled once.

Cathy Perez, mother of 16-year-old Vincent Perez, said they are here to “stop the gang injunction which is giving our kids sentences that can carry life sentences.”  She said, “There are a lot of discrepancies in my son’s case and there’s a lot of lies that are coming out.  I just want it all to be brought to the light because these boys are being accused and already labeled before they even went to trial.” 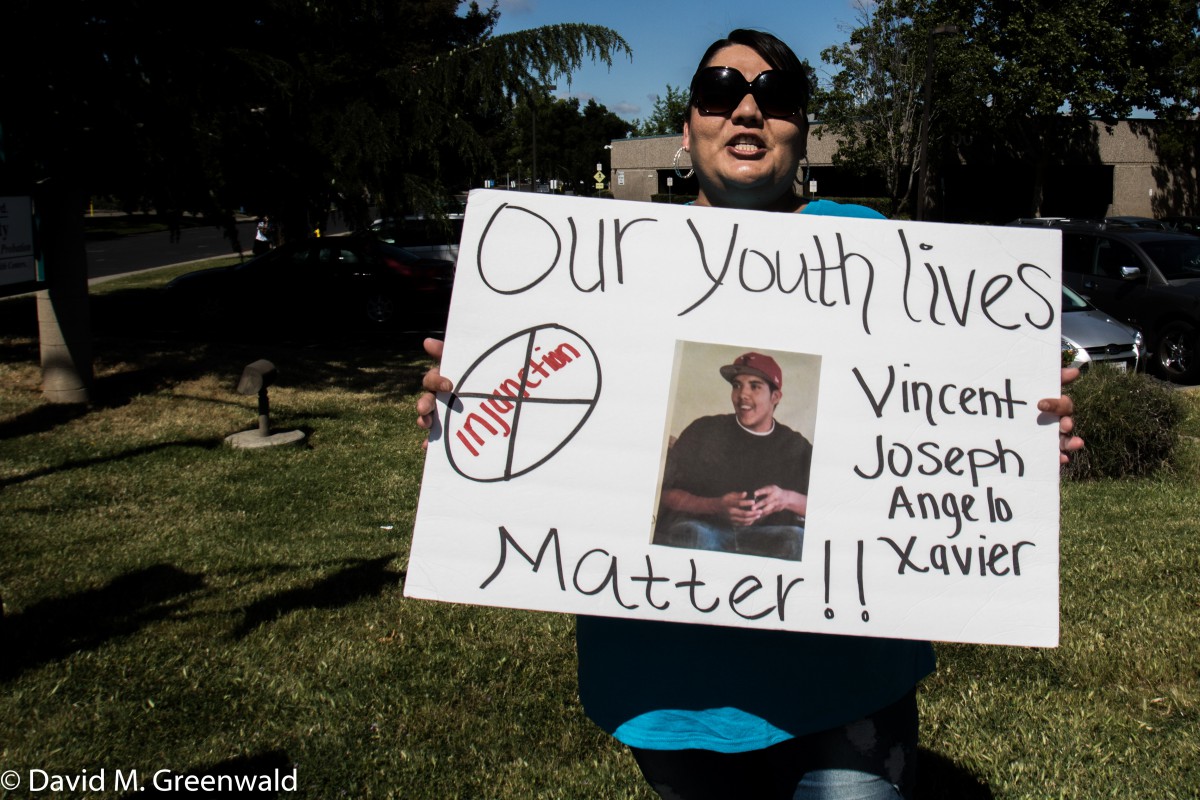 “We’re just out here to support them, to bring them home,” she said.  “They’ve been incarcerated for close to a year, and we’re still at square one. Justice hasn’t been served for them.  They’re still sitting in juvenile hall.”

She said that he is being accused in multiple cases – she believes him innocent and, in one of his cases, the charges were dismissed. “I’m sure they don’t want to drop the other one due to the fact that is tying together the gang (charges). There is no evidence against my son – it’s nothing but hearsay that’s against my son.”

She explained, “They placed these boys in lineups and they should have never been in a lineup because all victims stated that it was too dark to even describe the people who assaulted them.  Somehow our boys got put in lineups because of minor things that they were doing – little petty stuff that they have gotten in trouble for.”  She said, “This time he is innocent and that’s why we’re here because I want them home.”

Regina Martinez, mother of Joseph Gomez, 15 at the time of his arrest, said, “We’re out here to stop the gang injunction because it’s affecting our children’s lives and we want to make a better community for our children.  We want them to know that they have support from the neighborhoods.”

“We want to make a change in these neighborhoods because it’s been going on too long that these injunctions are affecting us,” she said, noting that they can’t even go to children’s birthday parties.  “We can’t be a community because of this injunction.”

She said, “We started a non-profit organization, ‘Broderick is a Community, Not a Gang,’ and we want everyone’s support.  We’re going to make Broderick better for children and the community.” 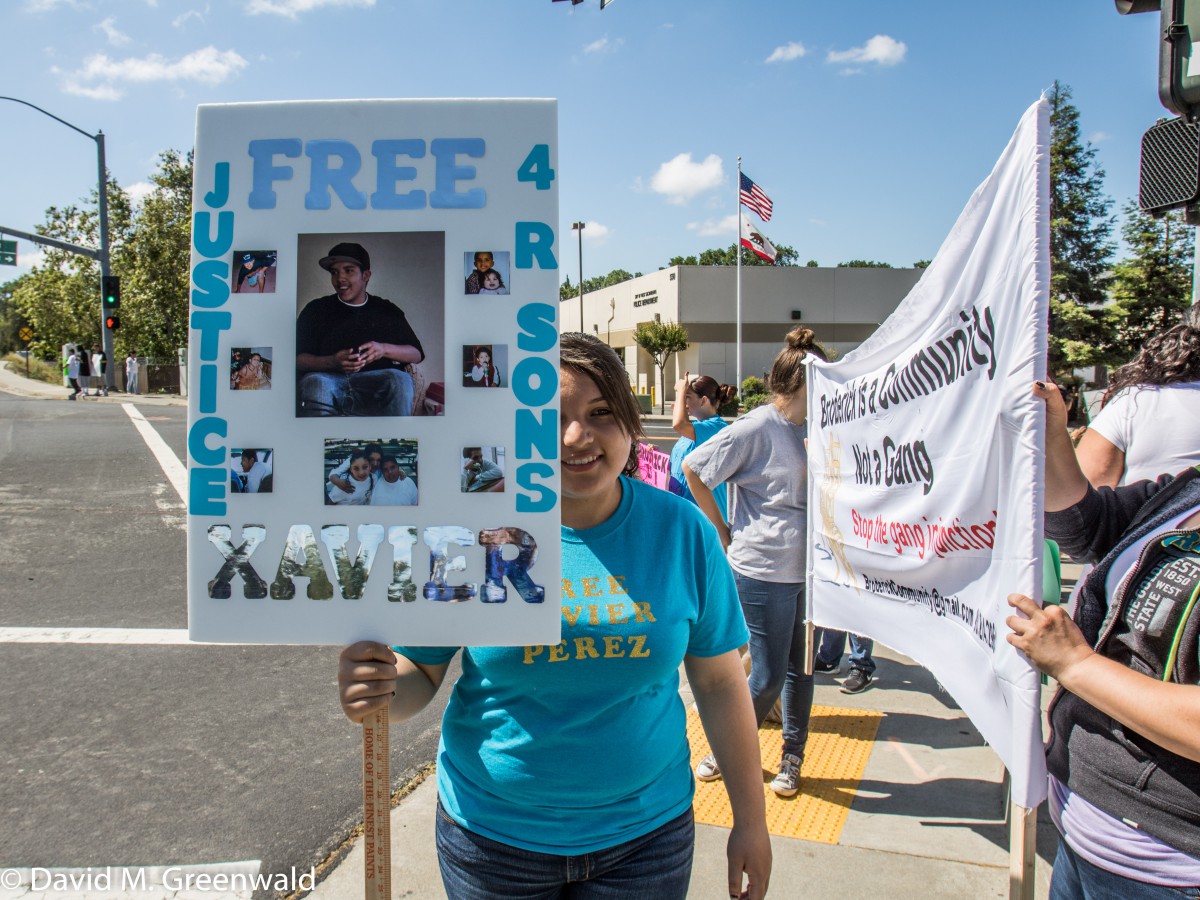 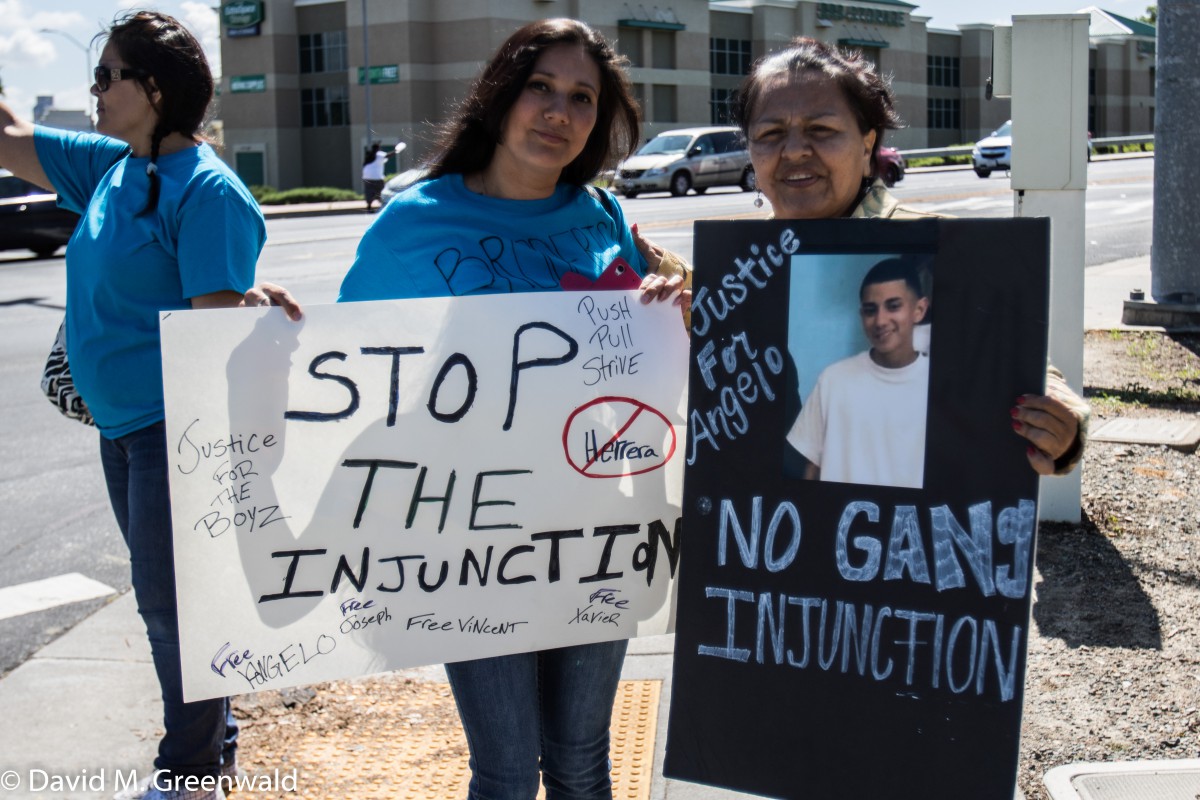 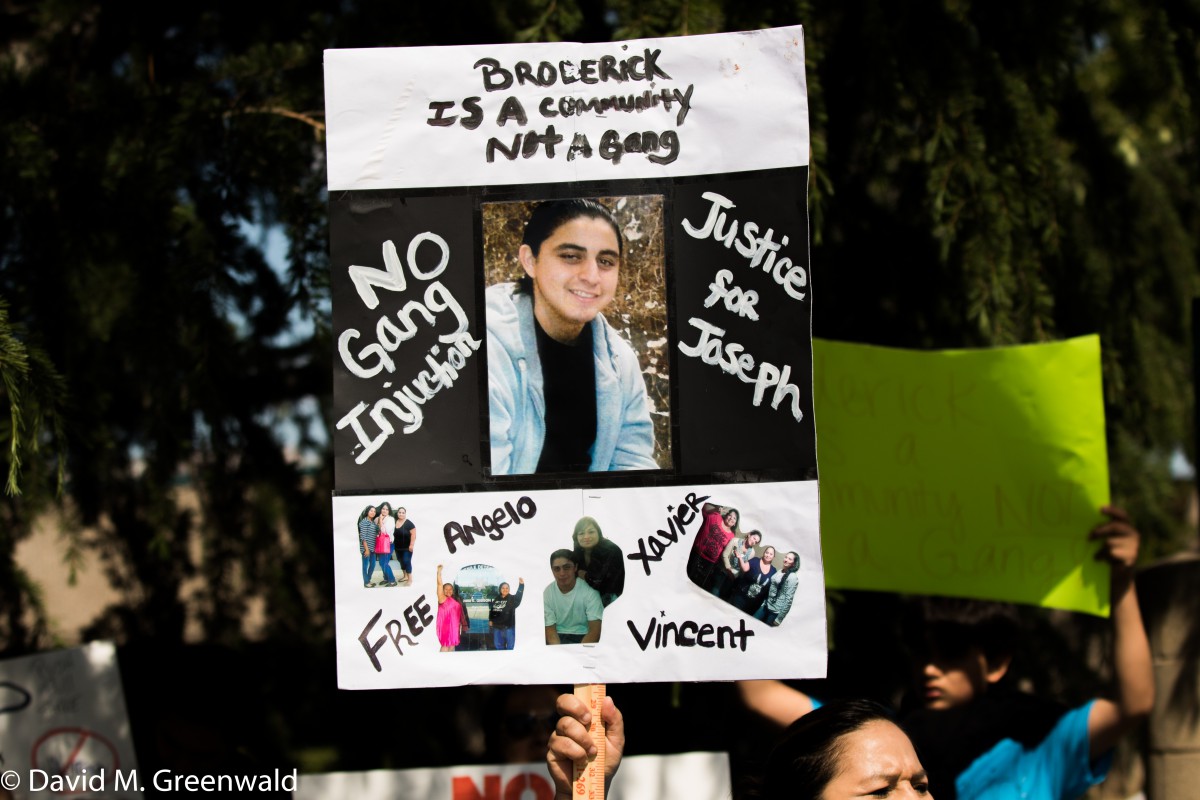 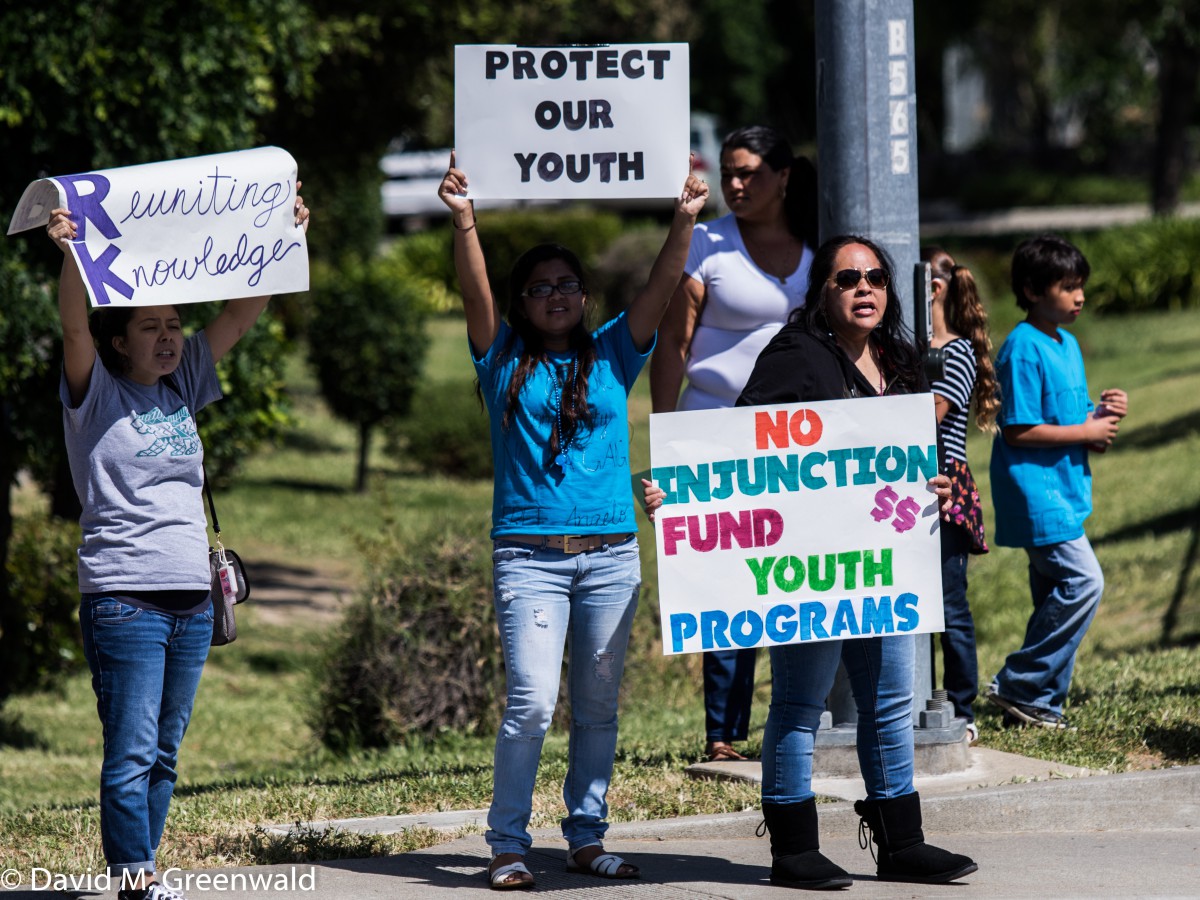 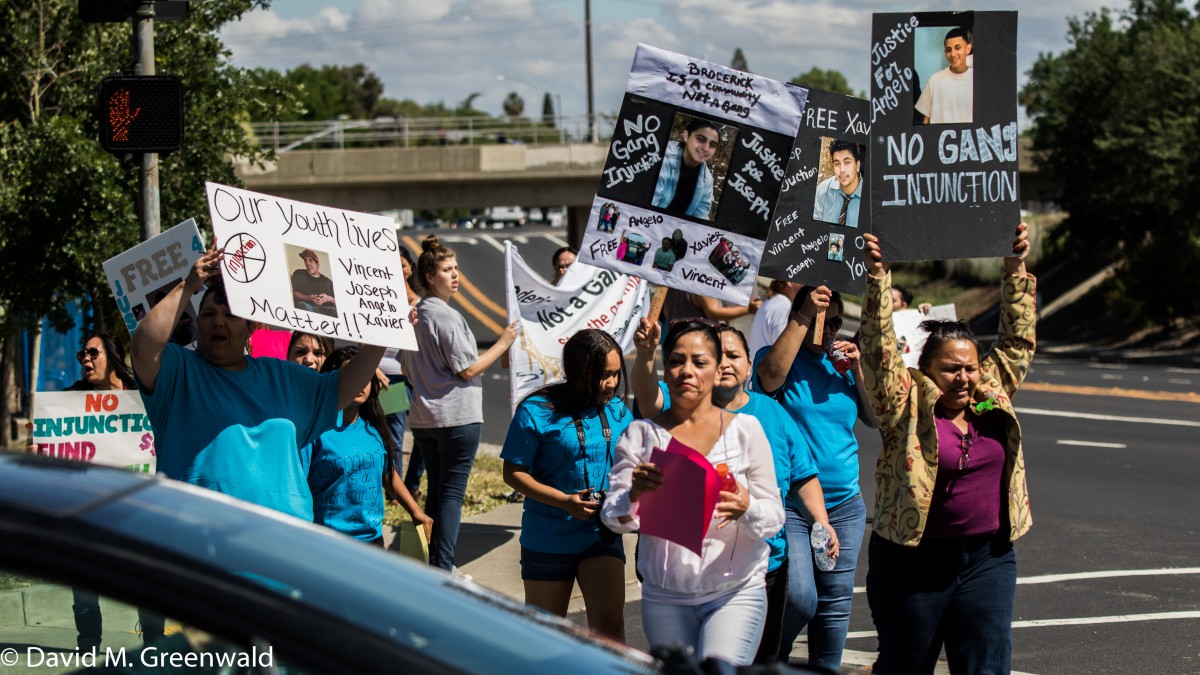 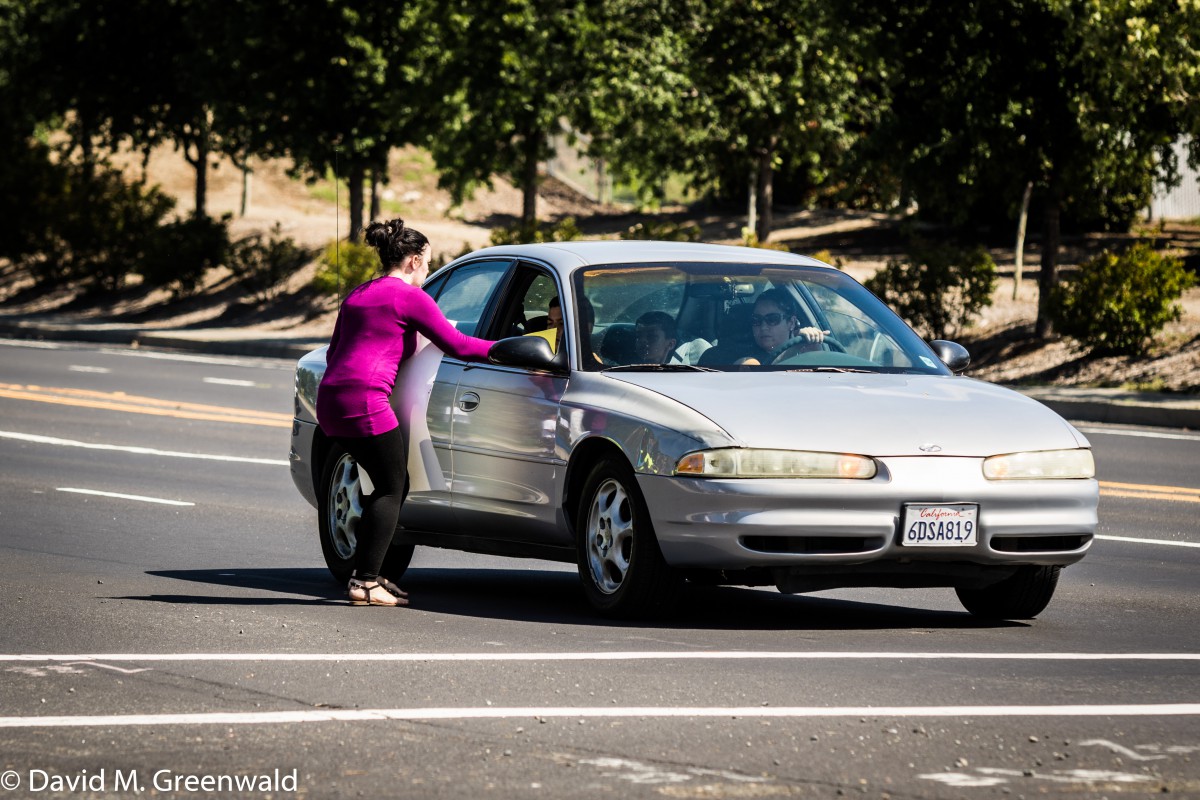 5 thoughts on “West Sacramento Residents Call for End to Gang Injunction; Justice for Juveniles in System”