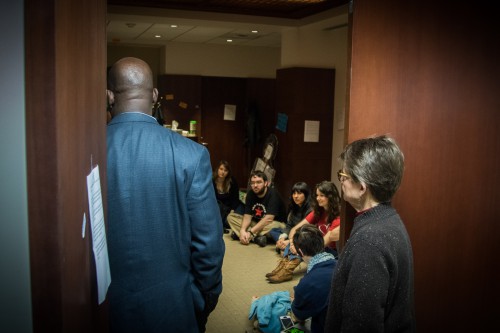 Several days before the Mrak Hall sit-in ended on Friday, a letter of support from members of UC Davis faculty came out endorsing the students participating in the protest. Sixty members of UC Davis faculty have signed the letter, which presents specific criticisms of administrative policies including lack of transparency and the imposition of a new “private-sector-inspired budget model.”

“While some of us might disagree with our students’ call for the resignation of Chancellor Katehi, we all strongly agree with their demand that university administration should take urgent steps to increase its accountability to our students and colleagues,” it states.

The Vanguard spoke with members of faculty about their decision to sign the letter of support. Julia Simon, a professor in the Department of French and Italian, criticized the university’s methods of dealing with student protests, and the 2011 pepper-spraying of students by police on campus.

“The chancellor’s staff and the people who work in Strategic Communications, they’ve come up with strategies for interacting with students in the aftermath of that episode, that, in my opinion, seem like they’re not really interested in engaging in meaningful dialogue,” she stated.

Both the Chancellor’s Office and the Office of Strategic Communications have been in the spotlight this week, as the pepper-spraying incident returned to national headlines. It originally resurfaced because of an exposé by the Sacramento Bee which found that at least $175,000 was spent to restore the online image of the university and of Chancellor Katehi in its aftermath. The report also found that the budget for Strategic Communications has increased by over $2.5 million since 2009. This coverage is bringing renewed calls for the chancellor’s resignation and further questions about the transparency of funds in the UC.

“I think actually everybody would be helped by more transparency and more budget accountability in the administration. I think the public, and the faculty and certainly the legislators would be happy to see that money was being well-spent– and if it isn’t, to do something about it,” Professor David Simpson told the Vanguard. Simpson, who also signed the letter of support for protesters, has been a professor in the English Department at UC Davis since 1997.

“We would like to know, well, what standards are being applied for performance and efficiency in the administration, if any. And in particular, when new hires are made, what are they for?” he added.

The faculty letter of support also criticizes the administration for the adoption of a new budget model that prioritizes the university’s potential to generate profit. The letter reads that “the new budget model forces us to make our courses attractive for mass consumption rather than allowing us to teach the next generation how to think, write, and read critically and independently.”

According to Professor Simon, “The university is trying to make up for the withdrawal of state funds, but at the same time that they’re trying to do that to fill in the shortfalls in the budget, they’ve gone to a productivity model that’s probably not appropriate for an educational setting.”

“At most of the public institutions in America, these kinds of struggles are going on, as these kinds of corporate models are applied to a university,” she continued. Many of the members of faculty who signed the letter seem to agree that the changes at the UC are symptomatic of a national trend towards privatization of public universities.

“This is nationwide, this is not just us. As the university becomes more and more bound into legal issues and legal consequences, and at the same time becomes more corporatized, and more dependent on its own fundraising mechanisms to fulfill the gap left by the state, then it obviously generates bigger bureaucracy,” Professor Simpson told the Vanguard.

The effects of the gradual restructuring of the university and its administration have varied across departments in recent years. One effect has been a steady increase in class sizes, which some argue has been disproportionately detrimental to departments in the Humanities and Social Sciences. The majority of the faculty who signed the letter of support for protesters teach in these departments.

“The Humanities have a lot more courses– and the Arts too– where individualized attention and a lot of feedback is really important for the learning process,” Professor Simon explained. She added that “these kinds of activities tend to suffer when you more to a more corporatized model that’s really aimed at productivity.”

Professor Simpson, who also works in the Humanities, encounters this issue at UC Davis as well. He told the Vanguard that “when you have a budget model which simply counts heads, how many students you teach, without any real attention to the kind of teaching you do, then it disadvantages units like ours.”

“What we’ve been told is ‘teach more students,’ and the kind of teaching we do, it’s very difficult to do that and still teach well,” he stated.

Faculty endorsement of the sit-in seems to be multi-faceted. One factor has been supporting the students’ exercising of their right to protest, as explicitly stated in their letter. It reads, “The students’ actions represent a revitalization of active democracy and a commitment to the proud tradition of understanding the University of California as a public good.”

But these members of faculty have also expressed their own set of demands for change on campus, which include increasing administrative transparency and moving away from a private-sector budget model. Both faculty and student groups have called for a more democratic, representational structure of campus administration.

“I would hope that there would be some really serious conversations coming out of this, where the administration actually asks the faculty what we think an education ought to look like, and what are the values that we’re trying to teach, and where should the money flow,” stated Professor Simon.

27 thoughts on “Faculty Members Call for Accountability and Transparency”