Organizers estimated nearly two hundred people showed up at a rally on the steps of the State Capitol, alongside State Senator Holly Mitchell, on Monday in support of legislation to curb police abuse in California.  Organizers helped to push for two key pieces of legislation – specifically, Senate Bill 443 (Mitchell) and Senate Bill 1286 (Senator Mark Leno).  The event was organized by the ACLU.

“Police abuse can take many forms,” said Norma Chavez-Peterson, Executive Director of the ACLU of San Diego and Imperial Counties. “And when these injustices continue – be it policing for profit or law enforcement judging the unnecessary killings of unarmed people of color behind closed doors – California should be leading the charge to ensure that our state laws reflect our American values of fairness, justice and transparency.”

SB 443, introduced by Senator Mitchell and boasting bipartisan support in the Legislature, would protect innocent Californians from unfair forfeitures by forbidding law enforcement from permanently taking and keeping someone’s money or property if that person is not convicted of a crime. For years, California law enforcement agencies have taken advantage of a loophole that allows them to take innocent people’s cash and property, and then keep a portion of the profits through civil asset forfeiture laws.

Senator Mitchell told the crowd on Monday, “I am a supporter of law enforcement.  I believe in a civil society where law enforcement plays an appropriate role in protecting and serving all of us in the citizenry.”  She noted that she had carried a lot of bills to expand training and funding for the police. 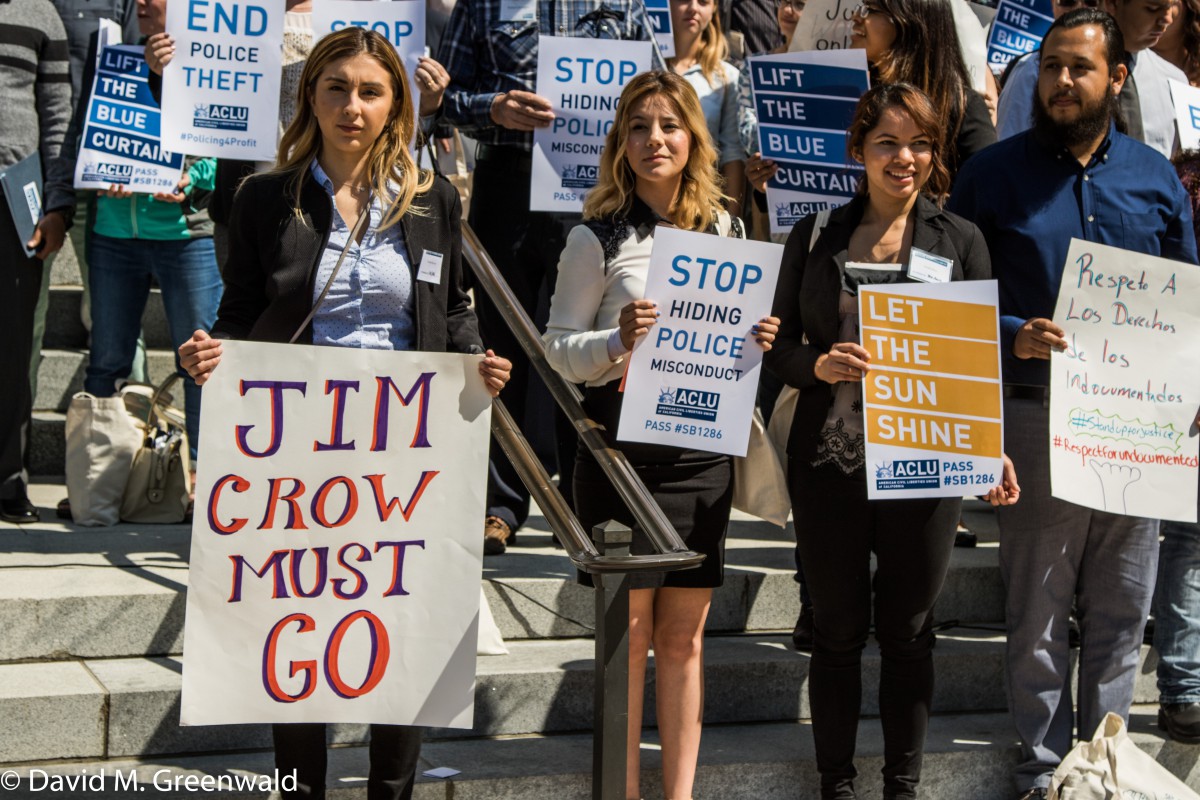 “Civil asset forfeiture goes against that basic premise – we should not live in a society where your private property cannot only be seized but forfeited even if you cannot be convicted of a crime,” she said.  “That’s just not fair.”

California State legislators 15 years ago, she said, passed a law to outlaw this practice.  But prosecutors and district attorneys are using a federal “loophole to circumvent state law,” she said.  “Just as I stand for law enforcement in an appropriate way, they must also step up and stand for the rights of private citizens in an appropriate way.”

“They don’t get to forfeit our assets even when they can’t convict us of a crime – that goes against the core tenets of our US Constitution,” she said.

Opponents will argue that this bill will cost law enforcement hundreds of thousands of dollars each year, but she responded, “You know that people shouldn’t count assets that don’t belong to them in the first place.”

Senator Mitchell said of SB 443, “The law puts a ‘finders-keepers’ tag on certain possessions of those accused of crime, which doesn’t have to come off even when the accusation is dropped. Time for a new tag: ‘No conviction – No confiscation!’”

Bill Alexander, a Lakeport, California, resident and veteran, told the harrowing story of a time when he was stopped and had over $10,000 in cash taken from him by law enforcement – money he was carrying to buy his daughter a car. He fought to get it back, but it took nearly eight months to do so, although no criminal charges were filed against him.

“That was a fight,” said Mr. Alexander. “The officers tried to scare me into submission by giving me two choices: I either said the money wasn’t mine and they would ‘call it a day’ or I told the truth and they’d slap three felonies on me. I was able to put up a fight, but I know other people might not have the means to do so.”

In addition to SB 443, people rallied in Support of SB 1286 sponsored by Mark Leno, who was not in attendance on Monday.

SB 1286 would restore police transparency in California by shining light on how police departments handle investigations into officer misconduct and serious uses of force. Unlike other public employees, all records related to police discipline are completely confidential and exempt from California’s Public Records Act. As a result, departments cannot disclose when an officer is guilty of misconduct, if corrective action was taken, or what the corrective action was.

“California is behind the times when it comes to providing transparency in law enforcement records,” said Senator Leno in a February press release. “The public has a right to know when officers apply deadly force and when serious cases of misconduct have been confirmed. Failing to disclose such important information can fuel mistrust within our communities and threaten public safety.” 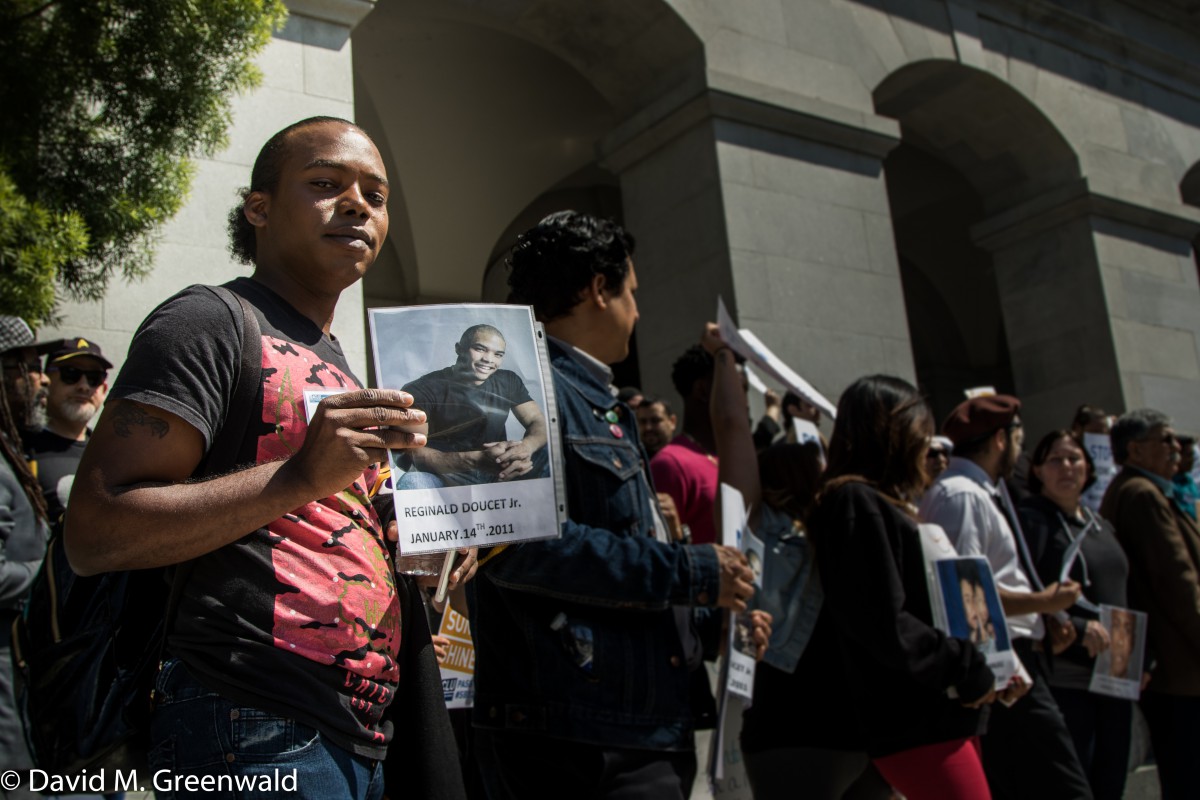 “For the public to have faith that police officers will act properly, it must believe that officers are not above the law — that officers who violate laws and policy will be held accountable. For that to happen, the public must be able to see those systems of accountability working,” the ACLU explains, but, in California, “the systems of police accountability are shrouded in secrecy, because California law bars almost all public access to information about investigations and discipline around officer-involved shootings, uses of force, and allegations of misconduct. This secrecy poses a fundamental obstacle to police-community trust.”

Brandy Brown, a member of the Youth Justice Coalition, a youth-led organization co-sponsoring SB 1286, urged the bill’s passing. Ms. Brown told the emotional story of the shooting of Ezell Ford.

She had been friends with Mr.  Ford, an unarmed Black man who was shot and killed by Los Angeles Police Department (LAPD) officers in 2014. On the day Mr. Ford was killed, both Ms. Brown’s then 1-year-old daughter and her 4-year-old nephew were outside on the balcony and saw the police shooting of Ezell Ford not far from where they were playing.

“I support SB 1286 because our law enforcement agencies need to aggressively make an effort to regain the trust of communities of color. A huge step toward this is restoring transparency into police misconduct and use of force investigations. Because without transparency, police will never be fully accountable to the communities they serve. And without accountability, there is not trust,” said Tanya Faison, founder of Black Lives Matter Sacramento.

“California is among a minority of states that makes police disciplinary records confidential,” said San Francisco District Attorney George Gascón in a February statement. “If the public can’t determine whether an officer has been disciplined they can’t assess if accountability mechanisms are working.  This contributes to the feeling that police departments are hiding something – even if they’re not – which ultimately adds to the mistrust between police and the communities they serve.  This dynamic has a detrimental effect on our public safety.”

“Citizens frequently entrust their lives to police officers. In return, we ask for transparency,” said San Francisco Public Defender Jeff Adachi. “Senator Leno’s proposed legislation will allow public access to information regarding officers who have been found to use excessive force and other misconduct. This bill provides potentially life-saving information to citizens while boosting accountability for police departments. In San Francisco, officers with serious misconduct records that should have disqualified them from duty have gone on to harm city residents. Sen. Leno’s bill will help prevent future tragedies.”

SB 443 is currently pending on the Assembly floor. The bill is co-sponsored by the ACLU of California, CHIRLA (Coalition for Humane Immigrant Rights of Los Angeles), the Drug Policy Alliance, the Ella Baker Center for Human Rights, and the Institute for Justice.

SB 1286 is scheduled to for a hearing in the Senate Public Safety Committee on Tuesday, April 12, 2016. The bill is co-sponsored by the ACLU of California, the California Newspaper Publishers Association, CURYJ (Communities United for Restorative Youth Justice), PICO California (the California branch of People Improving Communities through Organizing), and the Youth Justice Coalition. 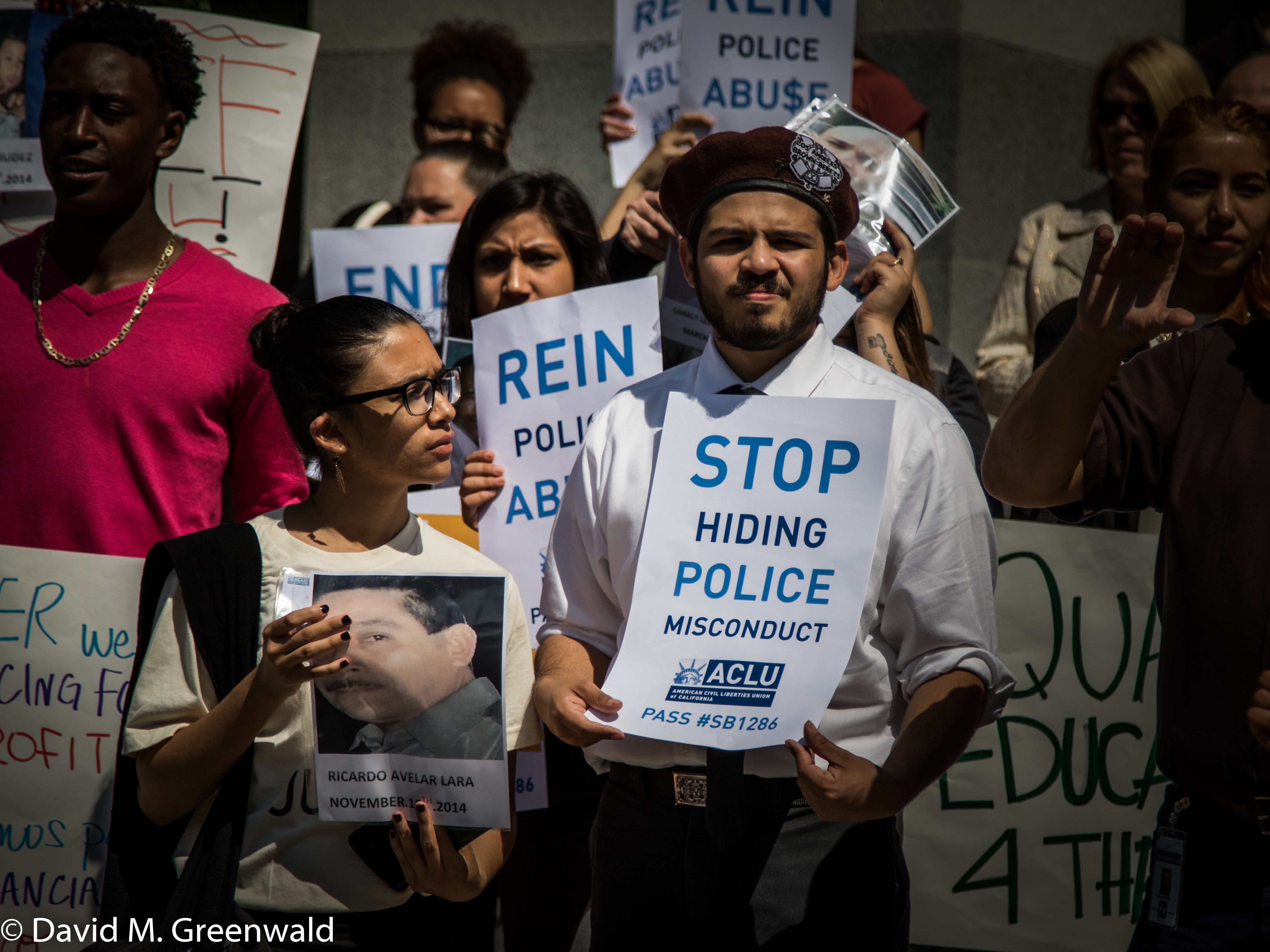 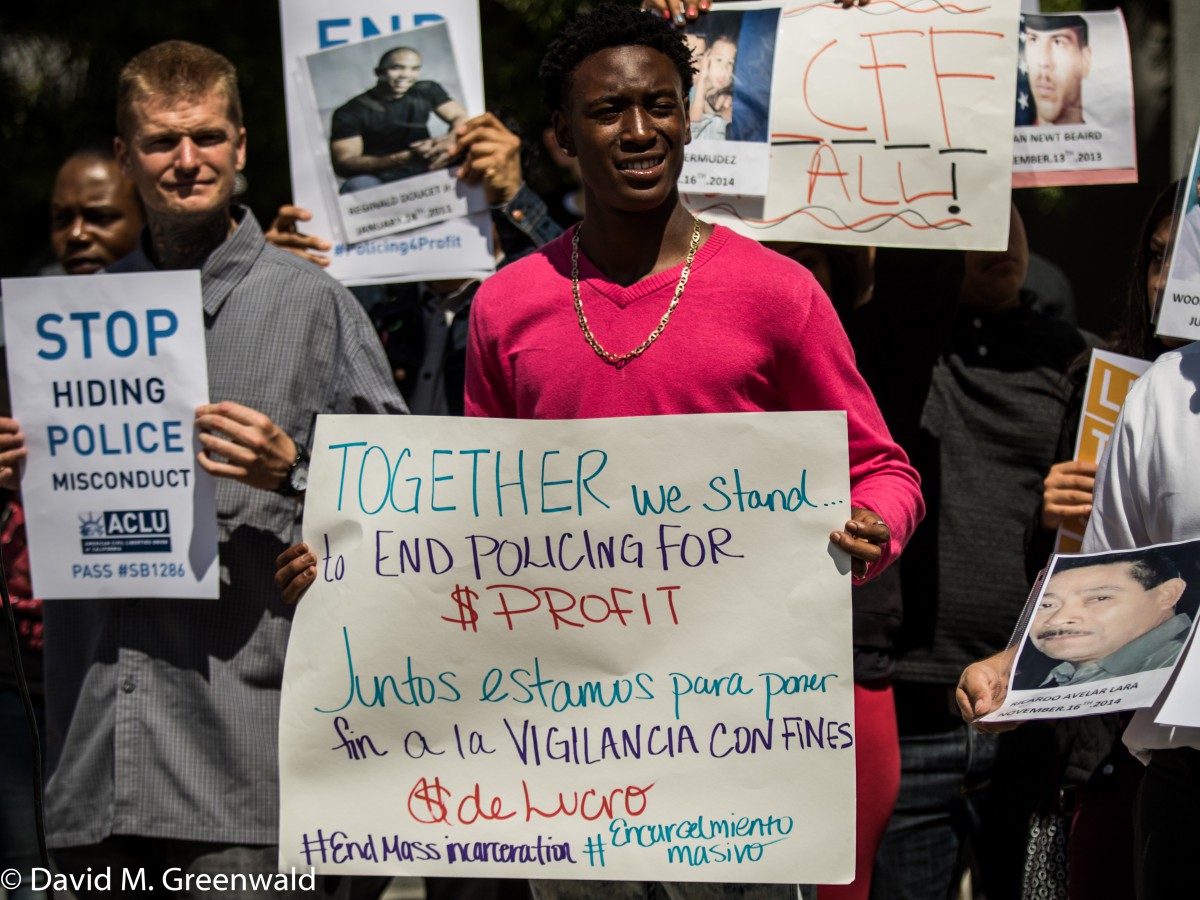 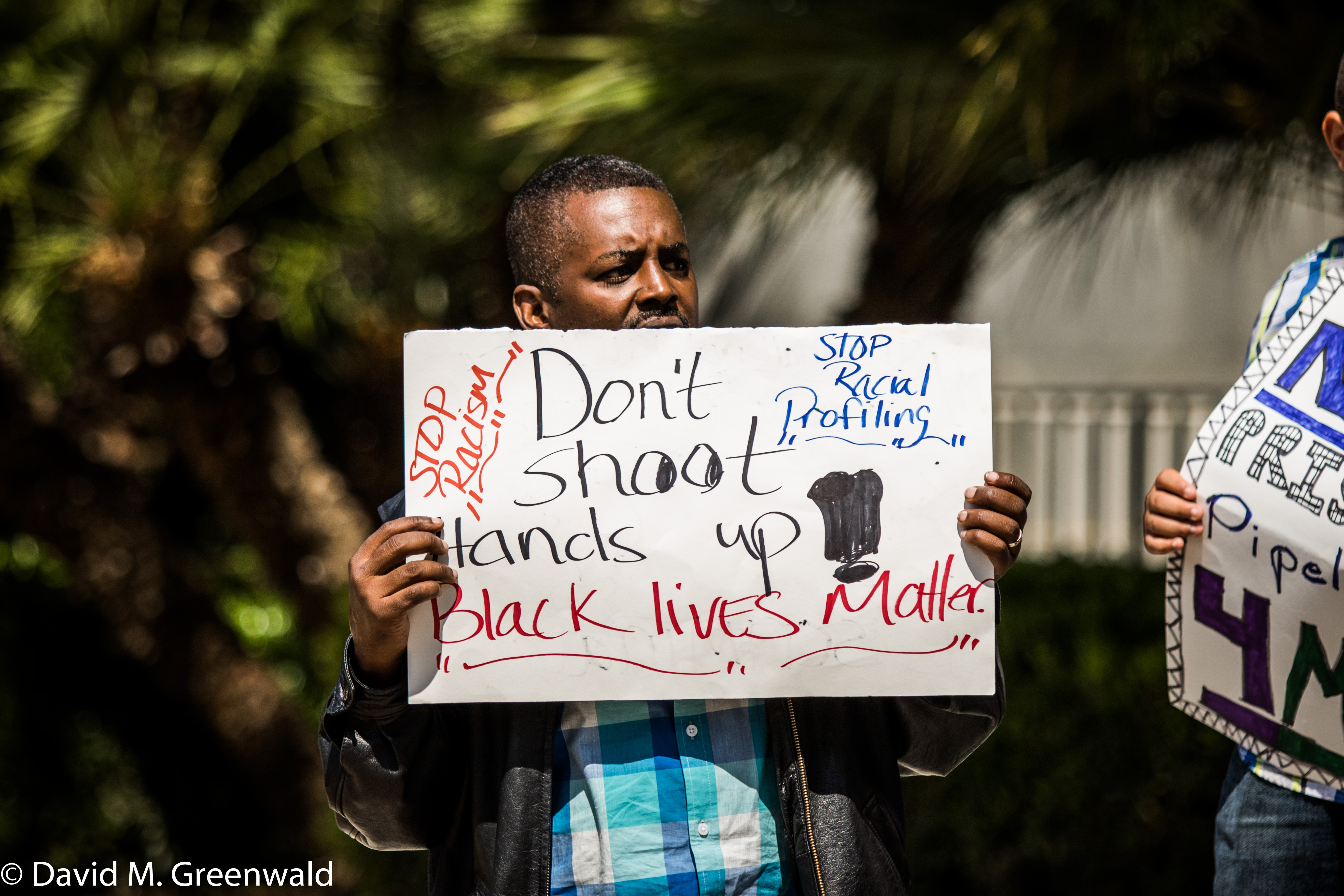 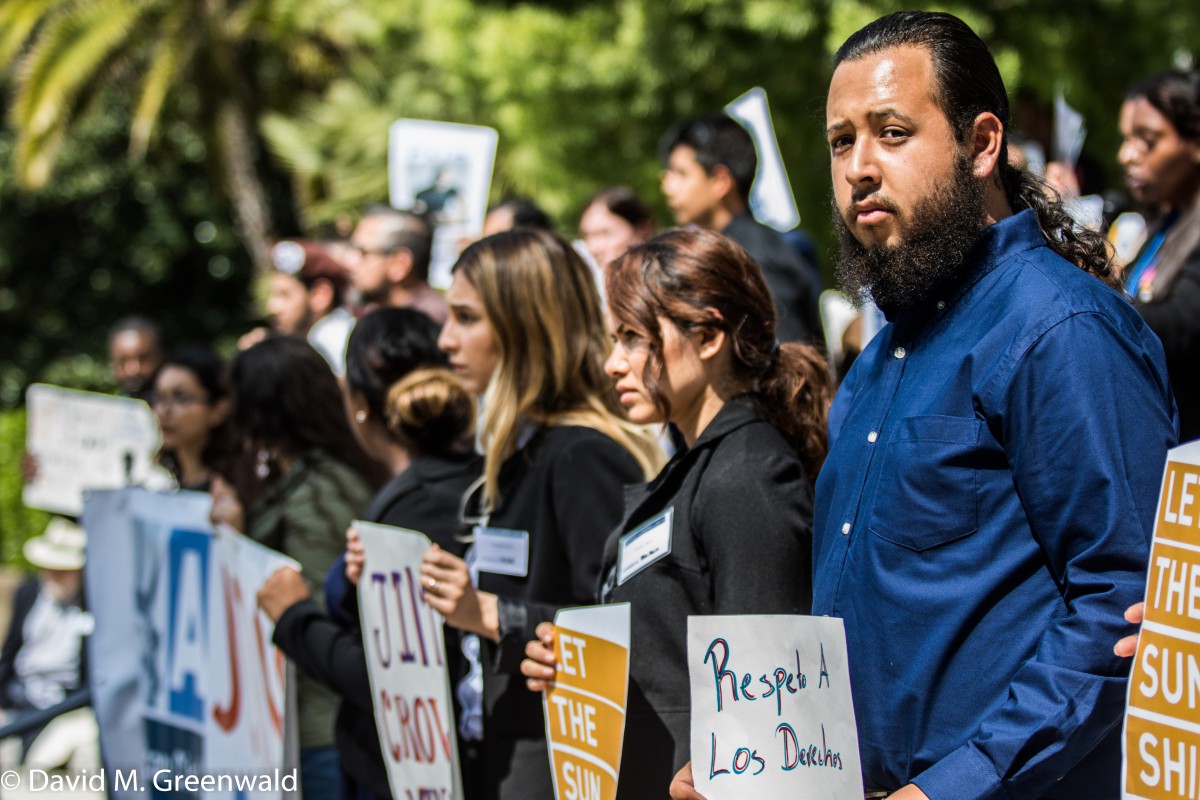 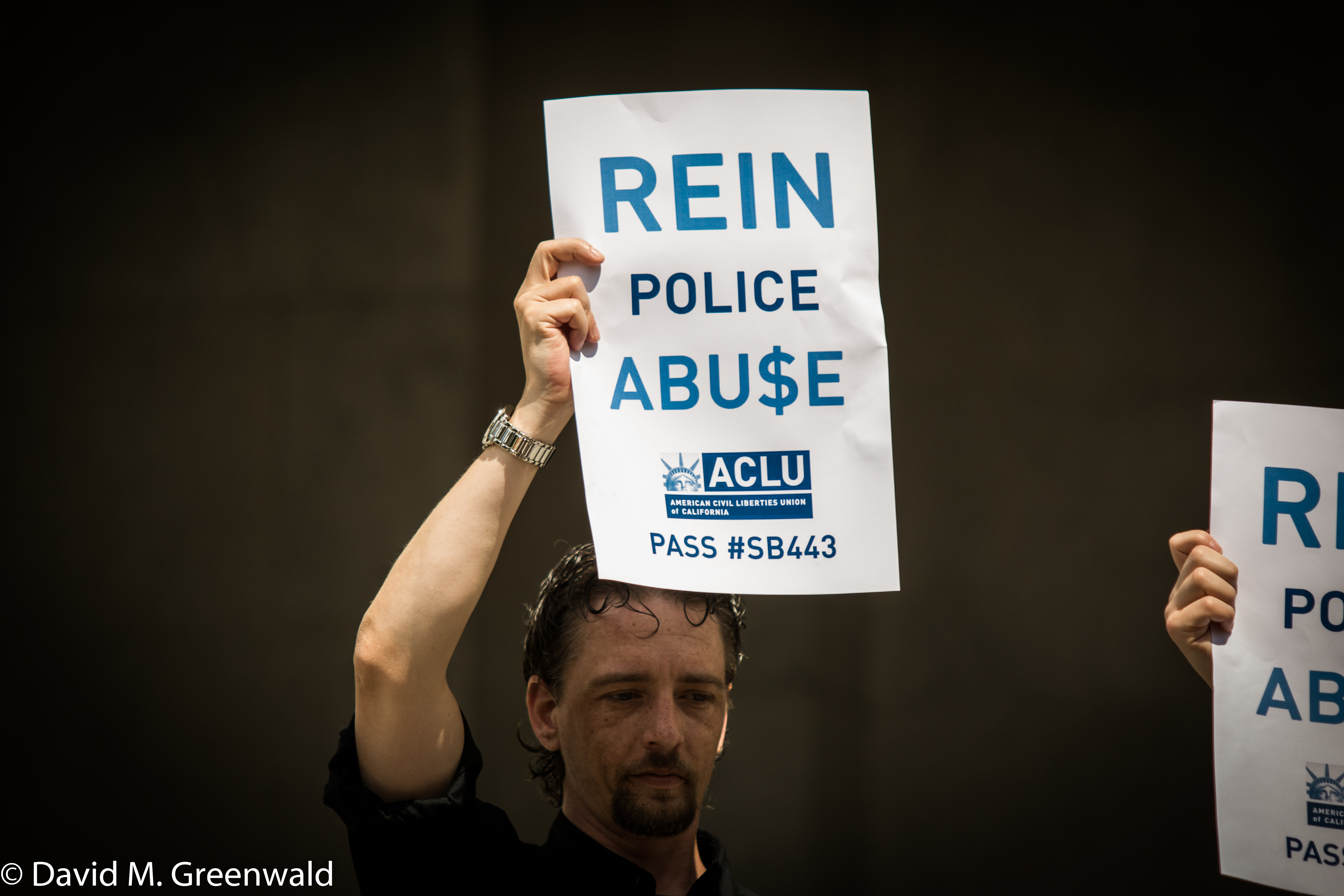 9 thoughts on “Hundreds on Capitol Steps Press for Police Reform”