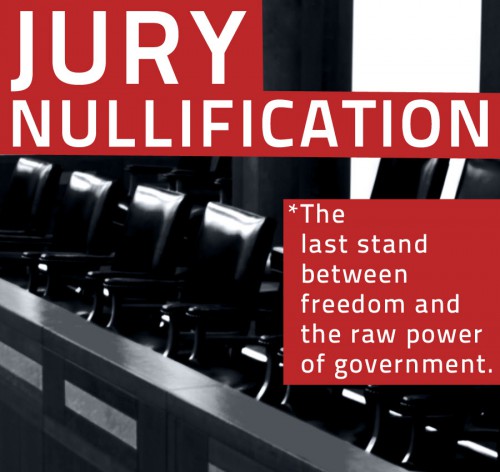 Jury nullification occurs when the jury in a criminal case reaches a verdict that defies the evidence.  Often this is because of a fundamental disagreement with the law in the case at hand.  But the jury possesses far more power in the American legal system than people might think.

The jury has the right to render a “general verdict” in criminal trials, and the criminal courts lack the ability to direct a verdict despite the weight of the evidence.  The Fifth Amendment’s double jeopardy clause prohibits the prosecution from retrying or even appealing an acquittal.  Finally, the jurors are immune from punishment for the verdict they render.

This week Georgetown Law Professor Paul Butler, a former trial attorney with the Justice Department, wrote an essay for the provocative Washington Post “In Theory” column.

He starts with an interesting account as a prosecutor in DC in the 1990s.

He writes, “I learned about jury nullification while serving as a prosecutor in the District in the 1990s. As a rookie, I was warned that in nonviolent drug cases, it would be tough to get a conviction, no matter how strong my evidence was. The experienced prosecutors explained that the African American jurors “didn’t want to send another black man to jail.”

“As I tried cases, I gained enormous respect for the seriousness with which jurors approached their work. The jurors were often elderly African Americans who had moved to D.C. to escape the Jim Crow South, and they were honored to serve on a jury because they came from places where blacks didn’t have that privilege. These jurors had no problem convicting anyone of a violent offense, if the government proved its case.

“For drug crimes, however, it was a different story. Then, as now, if you go to D.C. criminal court, you would think that white people do not commit crimes. There are virtually no white defendants. The jurors must have decided that they didn’t leave the old Jim Crow to help implement the new Jim Crow. So they frequently voted ‘not guilty’ in nonviolent drug cases, no matter how compelling the evidence.”

He even noted that he once chased down a juror, after losing a drug case “in which the defendant practically admitted he did it. Only one woman would talk to me.”  “We all knew he was guilty,” she said. “But he was so young.”

Professor Butler notes that these jurors are situated “in a long line of jurors who refused to go along with an oppressive criminal-justice system: jurors who refused to convict American patriots of sedition against the British crown; jurors who acquitted people guilty of violating the Fugitive Slave Act; and jurors who would not punish gay people for ‘sodomy’ for having consensual sex.”

Professor Butler published a Yale article where he “endorsed the D.C. jurors’ protest against selective prosecution of blacks. Yes, the jurors had taken an oath to follow the law, but they were following the advice of Alexander Hamilton, who said jurors should acquit even against the instructions of the judge, ‘if [in] exercising their judgment with discretion and honesty, they have a clear conviction that the charge of the court is wrong.’”

He noted that Mike Wallace on 60 Minutes warned that the professor’s proposal “that black jurors should vote not guilty in nonviolent drug cases — would ‘scare’ a lot of people.”

However, “some 20 years later, the whole world knows what African Americans have been saying all along. There are two justice systems in the United States: one for privileged white people, and

another, inferior one for everyone else.”

In 2015, 90 percent of the people punished in the DC criminal court were African American, despite the fact that blacks are less than half the population of the city.

Then there are the “endless series of videos” that “have shown how black people get policed.”

He argues, “Like a lot of African Americans, I am sick and tired of being sick and tired. I encourage any juror who thinks the police or prosecutors have crossed the line in a particular case to refuse to convict.”

Judges frequently make rulings that mean guilty people get off. For example, when the police have collected or analyzed in violation of the defendant’s rights under the Fourth Amendment, the evidence they found is suppressed even if that means that the defendant goes free. The point of the exclusionary rule, as this principle is called, is to deter police misconduct. It lets the cops know if they don’t follow the rules, they don’t have a case. Jurors should send police and prosecutors that same message about equal justice under the law.

Confronting the racial crisis in criminal justice, jury nullification gives jurors a special power to send the message that black lives matter. If they think that the police are treating African Americans unfairly — by engaging in racial profiling or using excessive force — they don’t have to convict, even if think the defendant is guilty.

Similarly, if prosecutors are selectively going after African Americans for offenses that white people do not get prosecuted for (drug crimes, for example), then jurors should not endorse that discrimination. By voting “not guilty,” jurors let prosecutors know that “just us” justice for black people is no longer acceptable.

Professor Butler certainly makes an interesting case.  Do you agree that juries should nullify the law in the face of police misconduct?  If juries did, it would probably go a lot farther to ending the practice than anything that has been proposed now.  And if we are talking about lesser offenses, we could probably live with some petty criminals escaping punishment when the police break the law.

22 thoughts on “Should Jurors Take the Law into Their Own Hands?”