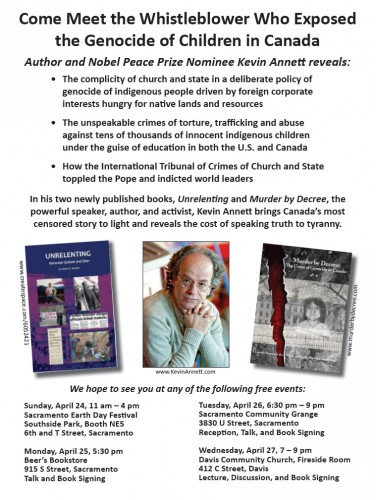 April is National Child Abuse Prevention Month.  “Abuse” does not fully define the terror of assault and battery against small children that may end in death.

The United States child death rate is so high that Congress passed the Protect Our Kids Act of 2012 to create a Commission to Eliminate Child Abuse and Neglect Fatalities. https://eliminatechildabusefatalities.sites.usa.gov/about-us/overview/

In honor of all murdered children, please join California Protective Parents Association in welcoming Reverend Kevin Annett on Wednesday April 27 in the Fireside Room of the Davis Community Church, 412 C Street, Davis, CA 95616 from 7:00 to 9:00 pm for a lecture, discussion and book signing.

Reverend Annett has twice been nominated for a Nobel Peace Prize. He began his career as a community organizer in Canada. After receiving a Masters of Political Science and a Masters of Divinity, he worked as an ordained United Church minister in British Columbia.

After uncovering evidence of murders and land theft by church officials, he was removed from his job in 1997. Under the auspices of the United Nations, he then organized a tribunal to investigate the high death rate of children in Canadian Residential Schools and founded the Truth Commission into Genocide in 2000.

He is presently a minister in the All People’s Church in Vancouver and hosts a public affairs and human rights program “Hidden from History”. His work has earned him both accolades and attacks.

Hidden from History: The Canadian Holocaust,

Love and Death in the Valley,

Rev. Kevin Annett was interviewed on March 31, 2016 by veteran civil rights leader Colia Clark from New York City’s MNN TV about his successful twenty-year struggle to expose and prosecute genocide and child murder in Canada by church and state.

(begins at the 50 second mark)