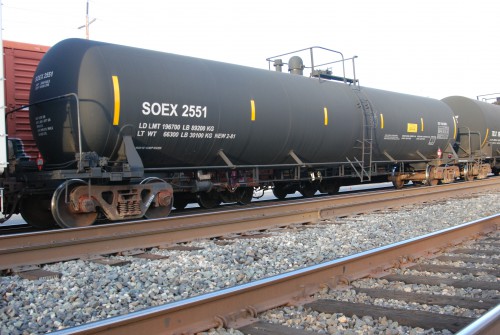 by Alan Miller
Despite the unanimous decision Feb. 11 by the Benicia Planning Commission against the Valero oil trains, 3 million gallons of highly explosive crude oil could soon be rolling through Central Davis daily on the way to the Benicia refinery.
Valero appealed the Planning Commission decision to the Benicia City Council on Feb. 29, and the council will hear that appeal this month. The hearings will be held:
Those familiar with the five-person Benicia City Council say there are two definite pro-Valero votes. This is action time. Davis citizens are needed to make the drive and show your presence at these hearings.
As outlined in my Feb. 28 piece in The Vanguard, Davis is especially vulnerable to an oil train catastrophe. A red-over-green railroad signal aspect indicates to the engineer a divergence between main tracks at 45 mph at most locations on the Oakland-to-Sacramento rail line ‹ but in East Davis, red-over-green indicates the need to slow to 10 mph due to an ancient low-speed crossover near the heart of town.
An engineer may occasionally ³space out² and forget where they are ‹ a condition recognized by the National Transportation Safety Board with the official title of ³loss of situational awareness.² I have twice witnessed Union Pacific Railroad trains passing through this crossover at three to four times the posted speed. You didn¹t hear about it because the trains ‹ barely ‹ stayed on the tracks, and UPRR wasn¹t about to advertise.

This is an issue that matters, for the safety of Davis. Otherwise, Davis may be added to the growing list of places for YouTube videos of burning orange mushroom clouds emanating from crumpled black railroad tank cars.

Be there TODAY! The anti-oil train rally starts at 6 p.m., and the City Council meeting starts at 7 p.m. The location is Benicia City Hall, 250 E. L St. As citizens, you need to have your voice heard to stop the massive increase in explosive cargo through Davis proposed by Valero.
Share:
Tags:BeniciaOil by Rail
Previous : Sunday Commentary II: Why Change Something That Is Working?
Next : Board to Hear YouthTruth Survey Results