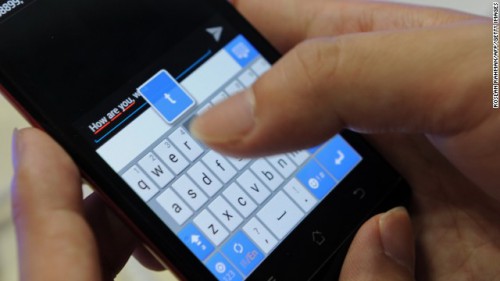 Last year, San Francisco officials conducted an investigation revealing that at least five police officers, long-time officers, were texting racist and anti-gay messages to each other.  However, earlier this month it was revealed that another set of officers were sending bigoted text messages.

The San Francisco Chronicle reports that the newly-found texts emerged during a probe of still more police misdeeds. They say, “DA George Gascón” acknowledged “a ‘substantial number of racist and homophobic text messages’ emerged during a recent criminal investigation.”

Mr. Adachi released text messages from former officer Jason Lai, which his office received Friday in discovery for a robbery case Lai helped investigate. In the messages, according to a press release from the public defender’s office, Mr. Lai makes disparaging remarks about African Americans, Latinos, Indians, and LGBT people. In the messages, which are rife with racial and sexual slurs, Mr. Lai compares black people to “barbarians” and “a pack of wild animals on the loose.”

Using a Cantonese slur for blacks, Mr. Lai states, “Bunch of hock gwais shooting each other. Too bad none of them died. One less to worry about.”

“It is chilling how casually former officer Lai dehumanizes the citizens he was sworn to serve,” Mr. Adachi said. “He wished violence upon the very people he was being paid to protect and none of his colleagues turned him in.”

The text messages came to light after police investigated a rape accusation against Mr. Lai. According to the public defender’s office, he was charged last month with two misdemeanor counts of unlawful possession of criminal history information and four misdemeanor counts of misuse of confidential Department of Motor Vehicles information and is currently free on bail.

In addition to Jason Lai, prosecutors have named two more SFPD officers in the most recent texting scandal—Curtis Liu and Keith Ybaretta. Their messages have not been provided to the public defender.

“It would be naive to believe these officers’ bigotry was reserved solely for text messages,” Mr. Adachi said. “It is a window into the biases they harbored. It likely influenced who they stopped, who they searched, who they arrested, and how they testified in criminal trials.”

This is the second texting scandal to surface. The first scandal, involving a group of five officers who sent racist and homophobic messages between 2011 and 2012, came to light during a police corruption trial.

“It’s time for officers to speak up when their colleagues exhibit this kind of bigotry,” Mr. Adachi said. “It is corroding community trust and making it harder for good officers to do their jobs.”

Mr. Adachi had previously issued the following statement following the latest revelation: “In light of revelations that a second group of San Francisco police officers exchanged racist and homophobic text messages, my office will begin a full review of past cases that may have been tainted by these officers. I am also calling for an independent investigation into when the police chief and district attorney learned of the text messages. Every person in San Francisco deserves equal justice. It does them a grave disservice to dismiss every hateful act as an isolated incident. The police department must address the culture that lets racism fester in its ranks.”

Sgt. Yolanda Williams, who was the target of some of the text message released last year, said a year ago, “We know that this is not an isolated incident. This problem is systemic within the San Francisco Police Department and unfortunately there have been some who have chosen to turn a blind eye.”

She said that some members of the Officers for Justice have been on the force for over 30 years and can recall similar incidents, even incidents far more egregious than the text messaging scandal.

She cited a consistent problem with the disciplinary process in the police department. She said, “When a minority officer stands before members of the command staff or the commission, unfortunately when their cases are heard, minority issues are dealt with a little bit more severe – the discipline (given to minority officers) is more severe.”

Sgt. Williams said, “I stand before you as a woman who was called… a NIGGER BITCH… I’m going to tell you something. First of all, it’s offensive to any female that has risked their lives on a daily basis for the citizens of this city. We entered into this position considering it a noble one and that is why we gave our lives and we committed ourselves to serve and protect the citizens of San Francisco.”

“These rogue cops have been disrespectful. They have brought discredit to our uniform. It is outright bigotry and hatredness. And as a victim, the thing that hurts me the most is the outright betrayal of this department,” she said forcefully.

He noted, “Because the San Francisco Police Department failed to investigate that matter within the one year statute of limitations provided by the Police Officers’ Bill of Rights, a Superior Court judge ruled that no discipline could be imposed on any of the officers involved. In the most recent texting scandal, the District Attorney contends that although police officials were aware of the texts in September 2015, they failed to notify the District Attorney until last week.”

He added, “These incidents reveal a pattern and practice within the police department that has allowed racism and disparate treatment of black and Latino people to fester and grow.”

He asked Ms. Harris and her office “to conduct a formal investigation to determine whether the San Francisco Police Department has engaged in a pattern or practice of conduct that deprives persons of ‘rights, privileges, or immunities secured or protected by the Constitution or laws of the United States or by the Constitution or Laws of California.’ California Civil Code §52.3.”