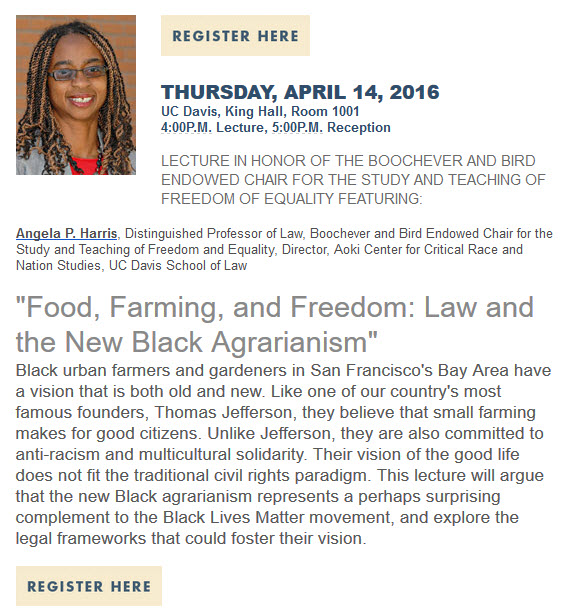 Professor Angela P. Harris, one of the nation’s foremost scholars in the fields of critical race theory, feminist legal theory, and civil rights, was appointed in 2015 as the Boochever and Bird Endowed Chair for the Study and Teaching of Freedom and Equality at UC Davis School of Law. Harris, who began teaching at UC Berkeley School of Law in 1988, joined the King Hall faculty in 2011. She also has been a visiting professor at the law schools of Stanford, Yale, and Georgetown, and served as Vice Dean of Research and Faculty Development at the State University of New York – University at Buffalo School of Law during 2010-11. She holds a bachelor’s degree from the University of Michigan and a master’s degree in Social Science from the University of Chicago, where she also received her JD. Following law school, she clerked for Judge Joel M. Flaum on the Seventh Circuit Court of Appeals, and then practiced with Morrison & Foerster in San Francisco.

The Boochever and Bird Chair was created with funding from Charlie ’73 and Charlotte Bird to support faculty research committed to preserving and expanding the virtues of freedom and equality. The chair was named for the Honorable Robert Boochever of the Supreme Court of Alaska and the U.S. Court of Appeals for the Ninth Circuit, and for Elizabeth J. Bird and Donald G. Bird. As the Boochever and Bird Chair, Professor Harris will have access to an endowment that will support her research, teaching, and service efforts.

Share:
Previous : Monday Morning Thoughts II: Why It Might Be Easier to Vote Down a Parcel Tax Than Change the School Board
Next : Rail Relocation Study Complete