One of the bigger issues of concern for current and past students is the issue of student loan debt.  Congressman John Garamendi, who represents Davis in Congress in addition to his role as a former UC Regent and CSU Trustee, has introduced The Student Loan Refinancing and Recalculating Act of 2016.

ASUCD President Alex Lee noted that roughly half the undergraduates pay no tuition at all but “a lot of us students take out loans.”  He said, “For the most part student loans are just a looming cloud over students.  We struggle to pay one bill at a time.  Student loan repayment comes six months after graduation and it’s a crushing reality to factor in with looking for jobs.”

“If this piece of legislation becomes law, you’ll be able to do so,” the Congressman said.

The bill also ensures that borrowers with an expected family contribution of less than or equal to $10,000 will not accrue interest on their student loans while they are in school.

“The federal government owns just under one trillion dollars of student debt,” he explained.  “Forty million students across the United States – some in school, many of them have graduated – are faced with the extraordinary task of paying off their student loans to the federal government.”

He argued this would allow students to pay off their loans quicker and get about their life instead of having to pay off a loan and hold off on getting a job and buying a home.

“Congress has improved student loan refinancing since I entered Congress, but tuition throughout America continues to skyrocket,” Congressman Garamendi said. “One in 7 borrowers default on federal student loans within three years of beginning repayment. We know that 30% of Federal Direct student loan dollars are in default, forbearance, or deferment, and at least 40 million Americans are burdened by student loan debt. Congress can and should do more. The Student Loan Refinancing and Recalculating Act would save millions of students and parents thousands of dollars as they prepare for the future.”

The students facing the worst of these are graduate students who, according to Congressman Garamendi, face rates of between 4 percent and 8 percent.  “This would allow them to refinance these loans,” he said.

“Graduate student loan debt is a financial barrier that prevents highly qualified individuals from accessing graduate school,” said Jacqui Barkoski with the Graduate Student Association. “This debt burden limits our ability to work in the public sector and also delays big ticket purchases (ie: homes, cars). The cost of a graduate education can delay completion of a graduate degree. This financial burden affects graduate student well-being including reports of depression, and difficulty paying for basic needs like food and housing.”

“What we want to do is give the students a chance, particularly the graduate students who have the greatest per person debt,” he said.

John Garamendi explained that this bill would create a forbearance preventing interest from accruing on the loan during school tenure.  Moreover, he explained, “For the life of me I don’t understand why the federal government would charge a fee, an origination fee on the loan.”  This would eliminate the origination fee.

The legislation will be introduced next week and it will address another problem with the system.  Currently, the government is borrowing money at 2% and lending it out at 4% and above.  He said, “The federal government will earn out of the pockets of the students, $138 billion over the course of a ten year period.”  Reducing the loan will not eliminate the profit, “but at least we’re going to reduce the burden on the students.  The federal government ought not be profiting on the students, in any case.” 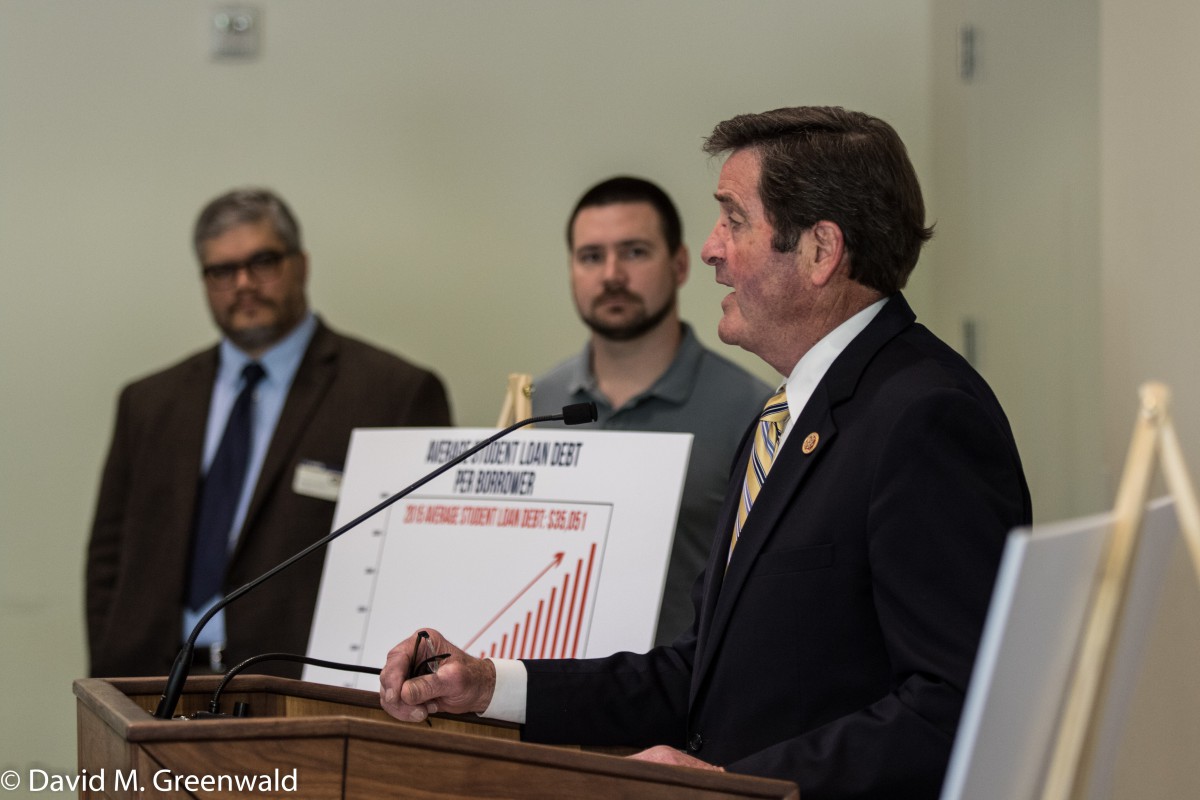 “Will we succeed?  I think we must, I don’t think we have a choice here,” he explained.  “It’s wrong.  It’s just plain, I think, unconscionable that the federal government would earn $138 billion over the next ten years on the backs of students that are trying to advance their own lives.”

The Congressman said he expects to have the support of the Republicans on this bill.  He said he has already talked to Education and Labor Committee Chair John Klein.  He said they had a long conversation and “he’s very sympathetic.”  He said, “The challenge he has is, by the rules of his caucus, it has to be a comprehensive education bill – so it gets tied up in a lot of other very controversial issues.”

He was told if he could find a way to take this as a stand-alone bill, just dealing with the interest rate issue, “we could probably move it.”  On the other hand, if it gets tied up in re-writing graduate education bills – it is controversial and a big lift.

But the Congressman is confident he can get this done.