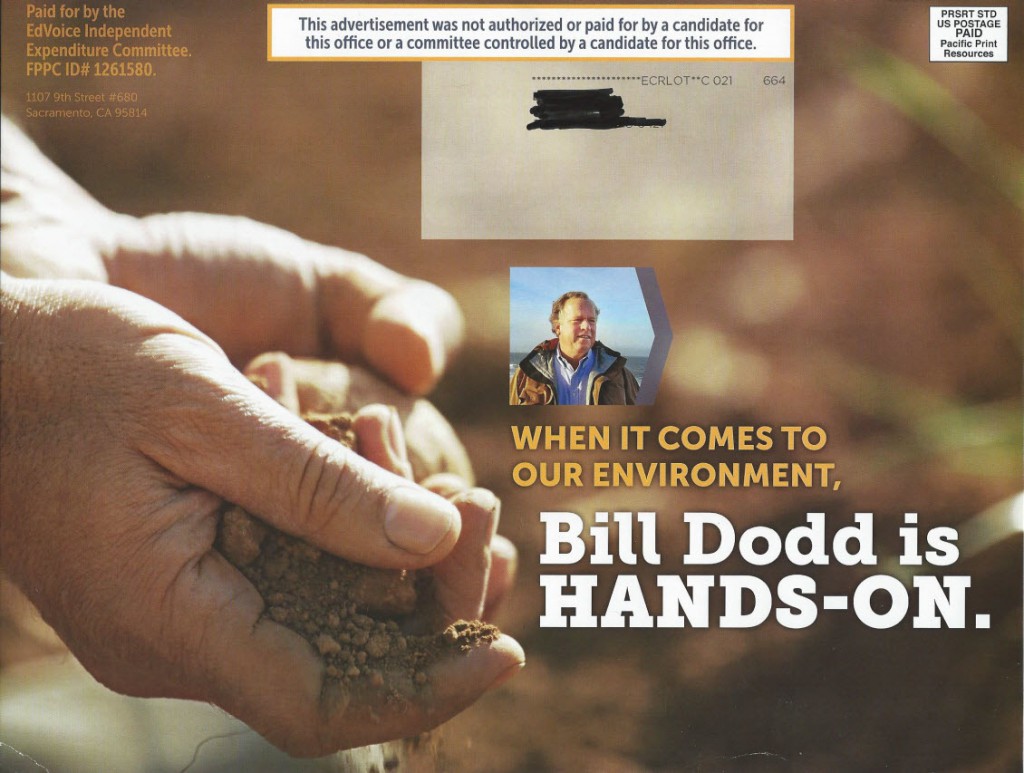 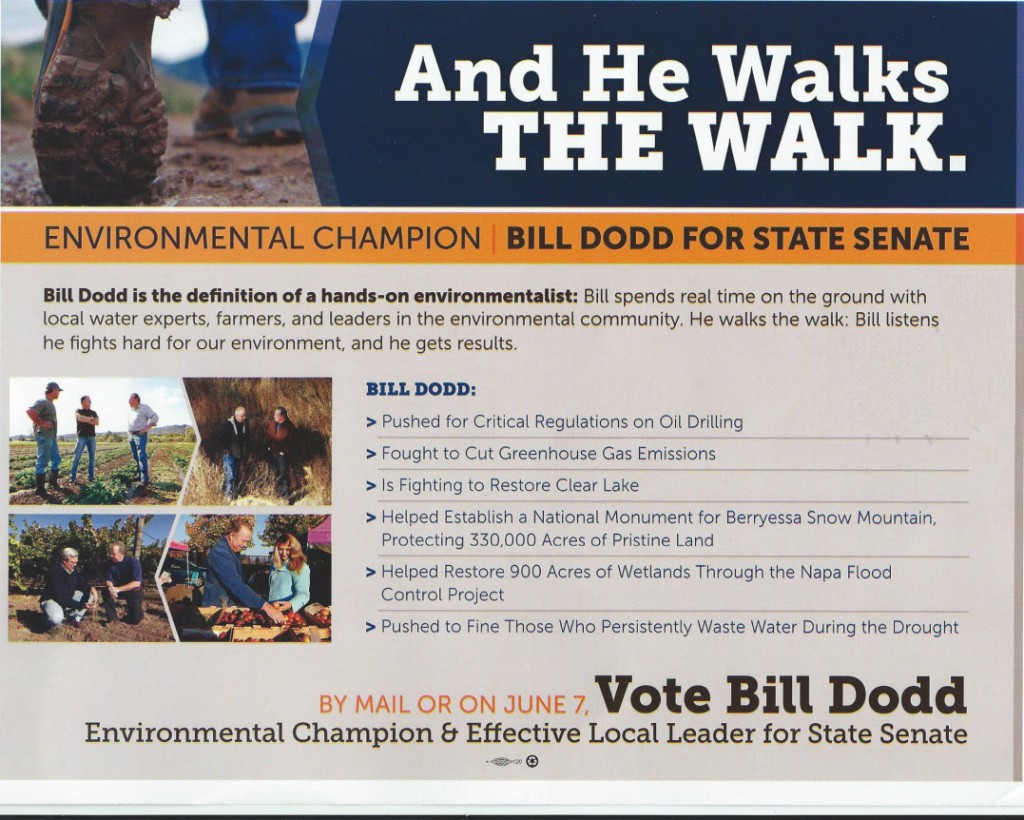 Had it been any other entity, the emergence of mailings on behalf of Bill Dodd on the environment and his overall record may not have even budged the needle.  But the fact that this is EdVoice is a different story.

Barely a month into the campaign, with most expenditures in the last two weeks of the filing deadline, EdVoice has already pumped in $240 thousand into the race.

There is a history here.  In 2008, the race between Mariko Yamada and Christopher Cabaldon for the State Assembly, where ultimately Mariko Yamada upset the West Sacramento mayor, saw a massive campaign by EdVoice, to the tune of nearly three-quarters of a million.

CTA (California Teachers Association) put in over half million of their own.  The Sacramento Bee in May 2008 wrote, “The California Teachers Association opposes Cabaldon because of his ties to EdVoice, a big supporter of charter schools. Cabaldon has butted heads with labor groups in years past on community college issues, by opposing a proposed West Sacramento casino, and by supporting a Wal-Mart Supercenter. Wal-Mart’s founding family has been a major EdVoice donor.”

So why is EdVoice getting involved again, this time on behalf of Bill Dodd?  It seems likely that they are extracting their revenge for Mariko Yamada’s win in 2008.

The first question is, who is EdVoice?  A 2006 article in the Capitol Weekly lays that out: “EdVoice a power player in Capitol’s political war over school funds.”  The Capitol Weekly wrote, “Its advisory board reads like a who’s who of California’s hyper-wealthy political players. There’s developer Eli Broad, Netflix founder and former president of the state board of education Reed Hastings, Silicon Valley venture capitalist John Doerr, and Gap founder Don Fisher. While different in political philosophy and temperament, they are linked by their desire to change California’s educational system–and they put their money where their mouths are.”

A decade later, their expenditure list reads like a who’s who of educational reformists.  Arthur Rock, a Silicon Valley businessman and investor, gave them $1 million.  Carrie Walton Penner is the granddaughter of Sam Walton and an influencer in the charter school movement, and she gave over $850,000.  Bill Bloomfield gave $750,000 as well.

Bill Bowes is a San Francisco based venture capitalist, number 384 on the list of the 400 Richest Americans.   He gave half a million.  Then you have John H. Scully, a Mill Valley investor.   Doris F. Fisher, who co-founded the Gap.  And Eli Broad, the Netflix Founder and one of the originals on EdVoice.

In total, the donations add up to more than $5 million.  So far, a small portion has gone to the Senate Race between Bill Dodd and Mariko Yamada.

If history of 2008 is a guide, we can expect the mailings to quickly go negative.  Critics criticized EdVoice for the quantity of the ads and the viciousness of them.

An ad that angered advocates for people with disabilities argued that a program designed to help people with disabilities get jobs was turned into an attack line of “$91,000 for coffee service.”  Yolo County Supervisors voted 3-2 to commit $91,000 to the Turning Point agency for equipment and training. That money came from a 2005 tax on millionaires that can be spent only for mental-health services.

EdVoice was founded in 2001 by “Reed Hastings (CEO of Netflix, Microsoft board member, Green Dot founding funder) and John Doerr (venture capitalist, investment banker), along with and former CA state Assembly members Ted Lempert and Steve Poizner. Eli Broad and Don Fisher (deceased CEO of The Gap and major KIPP supporter) once served on EdVoice’s board.”

In 1998, Mr. Hastings “also co-founded Californians for Public School Excellence with Don Shalvey. This is the organization that pushed for the Charter Schools Act of 1998, the law that lifted the cap on the number of charter schools in the state.”

EdVoice was a co-plaintiff in the infamous Vergara suit in which nine Southern California children filed suit.

In 2014, Former Senate President Gloria Romero wrote, “But the lawsuit was just the first punch, in a bold new reform plan. A second punch quickly followed, as reformers – led by the nonprofit EdVoice – drafted a ballot initiative. Initiatives are a tool citizens can use when their legislatures fail to enact laws representative of the people’s needs.”

The California Teachers Association (CTA) quickly put out a statement calling the ruling “deeply flawed” and vowing that CTA, CFT (California Federation of Teachers) and the state of California will appeal.

“We will appeal on behalf of students and educators. Circumventing the legislative process to strip teachers of their professional rights hurts our students and our schools,” the statement read. “This lawsuit has nothing to do with what’s best for kids, but was manufactured by a Silicon Valley millionaire and a corporate PR firm to undermine the teaching profession and push their agenda on our schools. Today’s ruling would make it harder to attract and retain quality teachers in our classrooms and ignores all research that shows experience is a key factor in effective teaching.”

EdVoice is now in the heart of the educational reform fray that we saw two years ago bleed into the race for Superintendent of Public Instruction.  Tom Torlakson was able to fend off a challenge from Marshall Tuck, but the battle still wages.

“The opposition is clear,” Mr. Torlakson said during a late campaign stop in Davis. “My opponent is a former Wall Street banker. I’m a teacher, he’s a banker. Different mindset, different goals.”

“He’s been funded by Walmart, one million bucks,” he continued. “(He’s a) Texas Enron trader who wants to end public pensions, Sort of take away what many of our hard working families have earned, paying into their public pension system.”

“We’re seeing that the Walmart folks are for vouchers.” Mr. Torlakson explained this as a way to take public dollars and put them toward private schools. He said this “weakens the schools that are remaining in the neighborhood and community.”

Mr. Torlakson cited a donation of $2.7 million against him, saying that “you’re seeing this trend of big corporate money coming in. My interpretation is clear: they want to take over public education. They want to privatize it. They see schools as profit centers, I see them as learning centers.”

Assemblymember Bill Dodd told the Vanguard this morning that CTA and other educational groups have stayed neutral in this race.

He said, while it is unfortunate that a rift between EdVoice and Mariko Yamada has bled into this race, he is grateful that thus far it has been a positive campaign on the part of EdVoice.

However, he said this points out the importance of the Citizens United decision by the US Supreme Court that makes unlimited independent expenditure campaigns perfectly legal.

13 thoughts on “Analysis: EdVoice with an IE for Dodd; Educational Reform Group Has Ties to Vergara Suit and Walmart”