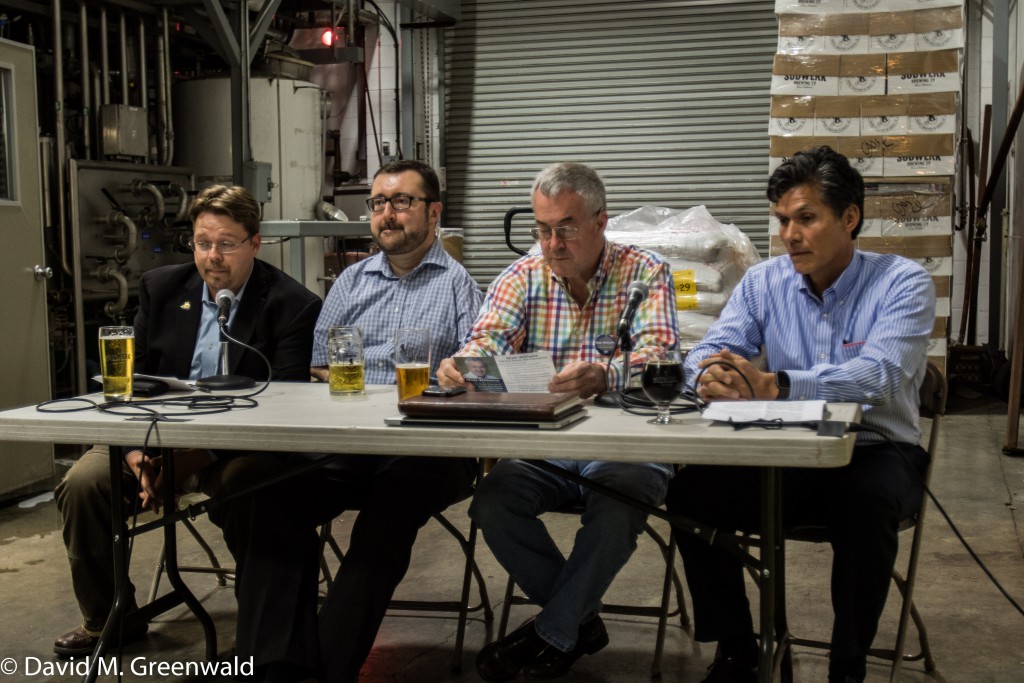 On Thursday night the Davis Chamber PAC held a candidates forum for the Davis City Council at Sudwerk Restaurant & Brewery.  The forum focused heavily on issues of business and development.  It was moderated by Vanessa  Errecarte, of Erreco Strategies, a marketing and consulting company.

The candidates got sixty seconds for their answers and the time was strictly enforced.

Lucas Frerichs:  The Mace Ranch Innovation Center project’s on hold.  It’s been stated that it’s on hold due to the lack of ability to proceed with housing.  That was the proposal that the city asked for, I also think that aside from housing issues – whether inclusion of housing or not – there are a number of other issues that exist with the Mace Ranch Innovation Center proposal.  I think chief among them is the Ag mitigation proposal that wasn’t fully fleshed out – but there are a variety of issues that exist there.  I’m confident that we can get it to get to get something that would work for the voters.  But I also think that of course the city needed the diversification of revenue first and foremost.  And make sure that we have room for our current businesses and new ones to expand and grow here in the community.  I’m a strong proponent of supporting some of these business expansions including Mori Seiki’s approval when I was Chair of the Planning Commission, Expression Systems right out here on Second St, as well as Gold Standard Diagnostics, and of course Davis Roots as well – I think as the incubator very important.

Will Arnold: As candidates we have had a few bites of this apple.  We were asked at the Vanguard forum, we were asked at the Sierra Club, we were asked by the Vanguard for written response, and in all of those opportunities I was the only candidate to indicate support for the Mace Ranch Innovation Center.  Granted there were caveats and nuances there’s still a lot to learn about that project, there are still a lot of details to be hashed out but I am a strong and vocal supporter of this project.  Our community came together through DSIDE and Innovation Park Task Force, through the City Council process and through the Chamber and came up with a plan, did a request for expression of interests for very specific sites – Mace was chief among them and in my opinion, that’s the best spot for this because it has Interstate 80 frontage and it has the infrastructure there.  I’m a strong supporter of this project and I want to see it built.

Matt Williams: The Mace project isn’t closed or not closed based on housing.  As you step up a level, the strategy for leveraging the research programs and the intellectual capital of UC Davis is solid.  The positives like Mace Ranch Innovation Center are due to failures at the tactical level.  When we had Finance and Budget the report by David Zender from BPS, he couldn’t justify a sale price other than $9 or $13 a square foot.  If we’re going to leverage that UC Davis intellectual capital and it won’t pencil out at $20 a square foot.  What we have failed to do is to be able to bring to the community examples of where that kind of model has succeeded.  It’s independent of housing, we need to show that we have something other than a generic business park.

Brett Lee: I have a slightly different opinion – why on earth would I support a proposal based upon a glossy brochure.  We don’t know what the actual details are of Mace and the perfect example is Nishi.  I support Nishi and what swung it was the details about Nishi.  The developer at Nishi has said that they will not occupy that site until the connection to the university is complete and CalTrans reconfigures the Richard interchange which dramatically impacts the feasibility of that site and negatively impacts on the actual community.  The negative impacts are mitigated.  So these types of details matter.  So the people saying ‘oh I love Mace’ or ‘I don’t like Mace’ – we don’t know what Mace is.  Imagine the housing component, it matters whether those 850 units were built in years 1, 2, or 3 or whether they were triggered at the 50 percent build out point or the 75 percent build out point.  Is the Mace innovation center a housing proposal or an innovation center proposal with a mixed use component?  We don’t know that until the details and so I can’t say I’m for it or against it until I see it in front of me just like I took that stand with Nishi and the Nishi details showed up and I support it.