Some of the nation’s largest corporations, including Chevron, Phillip Morris, Monsanto and others are working behind the scenes to elect Bill Dodd.

The facts behind the dark money:

Here is the breakdown by committee: 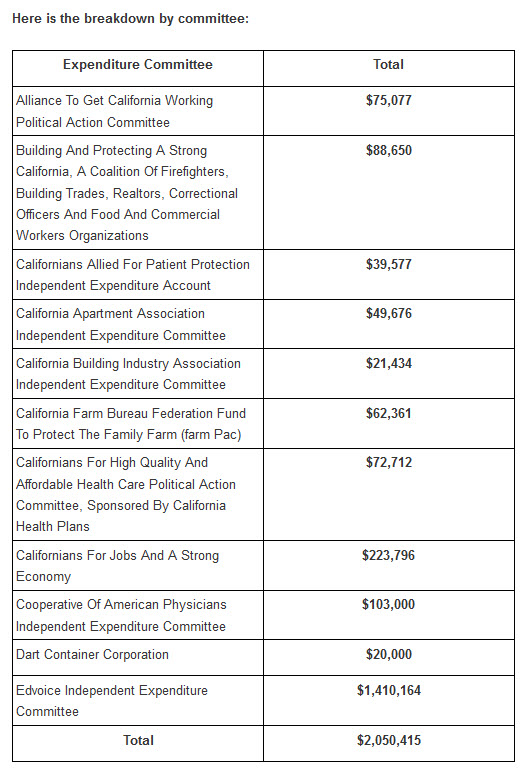 Money is funneled from committee to committee, but if you follow the money trail – it all leads back to the corporate titans of big oil, tobacco, pharmaceutical and insurance companies, and leading conservative Republican donors.

It’s clear these companies get what they pay for.

* As Chevron, Monsanto, other anti-environmental groups and insurance companies support Assemblyman Bill Dodd, he supports them right back.

* A recipient of multiple contributions from Monsanto, Dodd voted against legislation that would require manufacturers to disclose their ingredients on consumer products. (AB708, Business and Professions Committee)

* A key environmental bill requiring California’s emission standards be set 40% below 1990 levels failed to pass because Assemblymember Dodd and 14 other Senators did not vote. Dodd tells voters he cares about the environment, but when it comes to making a key vote, Dodd takes a walk.  (Source: September 9, 2015)

* After the tragic balcony collapse in Berkeley that took the life of a local resident, Dodd walked out on a vote for SB465, which would require increased oversight on contractor claims involving negligence, fraud and incompetence. (http://www.sacbee.com/news/politics-government/capitol-alert/article27262366.html)

* In both his 2014 Assembly races, Dodd accepted thousands of dollars in campaign contributions from corporations like Walmart and anti-environmental groups like Monsanto, Allied Propane Service and the California Independent Petroleum Association, an arm of big oil. (FPPC filings, 2014-2016)

* And Bill Dodd failed to appear at the most recent State Senate Candidate Debate on May 11 in Dixon – a town in Bill Dodd’s own Assembly District. (Source: The Reporter article, May 12, 2016)

Corporate-backed Bill Dodd is conveniently absent when called to take on the tough fights.

A registered Republican just months before he ran for Assembly, Dodd switched his party affiliation when he realized he couldn’t win as a Republican – so perhaps it’s no surprise that this conservative candidate is receiving support from special corporate interests.

Mariah Noah, Yamada campaign coordinator, said, “Follow the money – and the votes. It’s clear Bill Dodd is in the pockets of corporate special interests. Voters have a very clear choice – side with corporations or support Mariko Yamada’s people-powered campaign. A social worker for over 40 years, Mariko is a principled leader dedicated to serving and strengthening middle class families and taking a stand to protect our environment, water and food supply, seniors, veterans and the most vulnerable communities. It’s the tale of two campaigns that voters need to hear.”