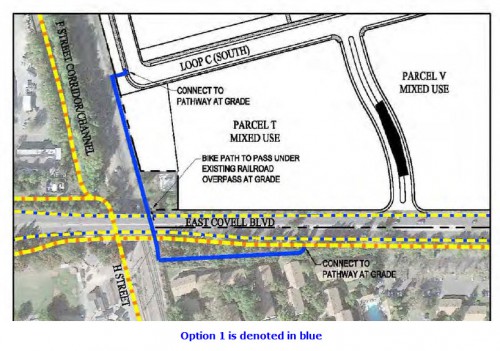 This time there would be no backing down in the face of requests from the Cannery.  Councilmember Lucas Frerichs sent the message early on stating, “I’m not in favor of Option 1, I think we should take another crack at… sitting down with the property owners.”

The subcommittee of Lucas Frerichs and Robb Davis will meet with the folks from the Cannery to take another crack at getting a better grade-separated crossing across Covell Boulevard for the Cannery project. The council passed the motion unanimously, after expressing dissatisfaction with Option 1 and hearing concerns from the bicycling community.

In November 2013, the city council narrowly approved the Cannery project on a 3-2 vote.  A key provision of that project was having grade-separated crossings to allow bicyclists and pedestrians to avoid the heavily congested Covell Blvd. crossing to the south.

However, both grade-separated crossings never made it into the development agreement, and a crossing to the east was always deemed to be problematic at best.

Staff recommended Option 1, which “is a connection that originates from the multi-use path within the southwest corner of the Cannery and runs south along the UPRR tracks, then sweeps to the east connecting to the Covell Boulevard multi-use path.”

Craig Blomberg, a 38-year bike commuter in Davis who just purchased a home in Cannery, explained to council during public comment that Option 1 suggests “we send our children under the existing overpass, up a steep incline followed by a hairpin turn over the overpass, which for an 8- or 10-year-old is going to be quite a hike, down the other side dumping onto a very busy street to a crosswalk that just last week was the result of a very serious pedestrian versus motor vehicle collision.”

Alan Miller, in a lengthy letter sent to council and the Vanguard, notes, “There is no issue from recent-year City Councils that I consider a more colossal failure than the failure to secure a bicycle and pedestrian path from the Cannery development to the H Street bicycle/pedestrian tunnel.  I am personally and individually disappointed with those of you who enabled this failure.”

He argues, “The H Street connection was the gem in the packet of infrastructure improvements from building the Cannery, and cause for my support of a project I was otherwise lukewarm about at best.”  He writes, “The H Street tunnel connection would allow bicyclists and student traffic to access the East-West path that leads directly to Davis elementary, junior high and high schools, as well as downtown.  The exposure to auto traffic in the daily student commute would have been greatly diminished.”

Mr. Miller adds, “The ramp-up-to-Covell connection is cheap and rather non-functional.  It places bicycles on a path they would get on anyway to cross Covell, and requires bikes to cross at the intersection of Covell and F, a rather busy and questionably safe (free turns) intersection, one way on the wrong (left hand) side.”

Following public comment, Councilmember Frerichs argued that “Option 1 is not the option for the community.”

Mayor Pro Tem Robb Davis noted that the subcommittee needs one more chance to get this right.  He said, “I think we’ve tried, but I think too we’ve both gotten busy.”  He asked for two to three more weeks of work as a subcommittee, pledging to redouble their efforts.

He added, “I know that staff is not enamored with the H Street Tunnel option.”  He said, “It’s not a great option, there are some things that need to be done to make it a better option, an optimal one.  But it was what was considered to be the best solution.”

He said, “I concur with what we heard in the public comment that we need to take a stronger measure to make it happen.”

He urged Mr. Whitcombe not to make political calculations and instead do what’s best in the community.

Councilmember Brett Lee, however, took a different view on this. He noted that during the original decision on the Cannery proposal, “up until the very last moment, it was clear that there was not a connectivity plan, there was a connectivity hope.”

He said, “If anything has been clear in this process, at that night it was clear, two years ago (Whitcombe) did not want that access to occur.”  Councilmember Lee felt that the notion that they should get Mr. Whitcombe and company in the room (to agree) and “twist their arm,” he said, “To me that’s not appropriate.  They’ve been very clear, they’ve been upfront. They said, this is not an option, we’re not interested.”

“This idea that we’re going to use eminent domain to clean up a mess that the city created,” he said.  “I find that totally unacceptable.  That’s not what eminent domain is for.”

Instead, he argued that the people we need in the room are the Cannery folks “who keep coming back asking for more and more from us.  In exchange we’ve received essentially very very little.”

Brett Lee said, “They’re going to come back.  Suspiciously, their ask has somehow been removed from the table.  I’d like to have that ask, concurrent with our ask.”

Councilmember Lee pushed for Alternative 4, arguing that it is the one plan with no backtracking, and said that he felt “psychologically backtracking is kind of a pain in the neck.”

He argued if we build the staff-recommended access point, “It’s mediocre.  A lot of the kids are going to go across the semi-Dutch Junction.”

He concluded that if anyone should be locked in the room it should be the Cannery folks, not the people to the south.

Rochelle Swanson moved to send the item back to the subcommittee to meet with Cannery to discuss options before returning to council. The motion passed unanimously.