In early April, the Vanguard reported that first quarter 2016 crime stats moved downward in Davis and West Sacramento. Statistics now available presented by the Woodland Police Department show that crime stats are down in Yolo County across the board.

In 2014, California’s violent crime rate was at a 47-year low, according to the Public Policy Institute of California (PPIC) website. The property crime rate was below the 50-year low reached in 2011.

In 2015, following historic lows, crime rate went up.  Because Proposition 47 was passed in November 2014, which made drug offenses and low level property crimes misdemeanors rather than felonies, blame was put on Prop. 47 for this uptick.  However, new data is emerging that suggests this interpretation was premature. 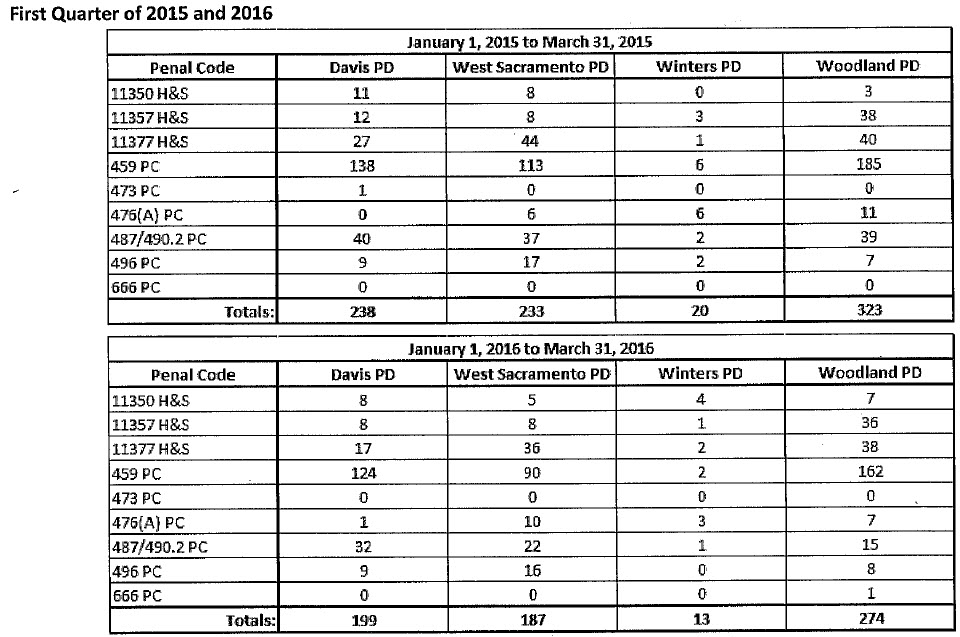 These new findings vary tremendously from the March presentation by Yolo County DA Jeff Reisig and Chief Probation Officer Brent Cardall, who blamed the implementation of Proposition 47 on a cited rising crime rate.

“All of the major cities in Yolo County, Davis, Woodland and West Sacramento, have seen increases in violent crime and property crime in 2015,” Reisig said. “We are surrounded by the very imminent threat, and I don’t think it’s going away.”

“Our efforts so far have been pretty dismal,” he said.

As Mike Males, Senior Research Fellow at the Center on Juvenile and Criminal Justice, put it, “It is too early to conclusively measure the effects of Proposition 47 on crime rates just one year after the law took effect. The urban crime increase in the first half of 2015 could be a normal fluctuation, such as those that occurred from 1999 to 2001 or from 2005 to 2006 (CJSC, 2016). Initial trends are often reversed later. In the case of Realignment, implemented in 2011, crime initially increased in 2012, but later declined sharply in 2013 and 2014.”

But that didn’t stop Yolo County Chief Probation Officer Brent Cardall from joining Jeff Reisig in his criticism of Prop. 47 last month. Mr. Cardall told the Board of Supervisors, “Prop. 47 has not been good, in my opinion.”

Both men blamed the lack of “a stick” to convince offenders to enter treatment as part of the uptick in crime.

“They’re not looking at a year in jail,” Mr. Cardall said. “They’re looking at 30 to 60 days. … I have not seen lengthy sentences with that population.”

To Supervisor Jim Provenza, he offered, “The judges could order longer sentences.”

The problem with shorter sentences, Mr. Cardall said, “is the clients would rather (face) 30 to 60 days in jail and be done with their sentence and be released. It’s difficult to have them under supervision and go through treatment if there’s not a stick.”

Mr. Reisig offered, “For 2015, California is leading the way in violent crime and property crime increases.”

But, while the conclusions are still premature, the new data suggest a different story – one that suggests that 2015 was a sorting out year and that it is too soon to tell in terms of long-term and overall impact of these major changes.

Missing as well from that discussion was the fact that we were looking at crime increases after years of dropping crime rates to historic lows. 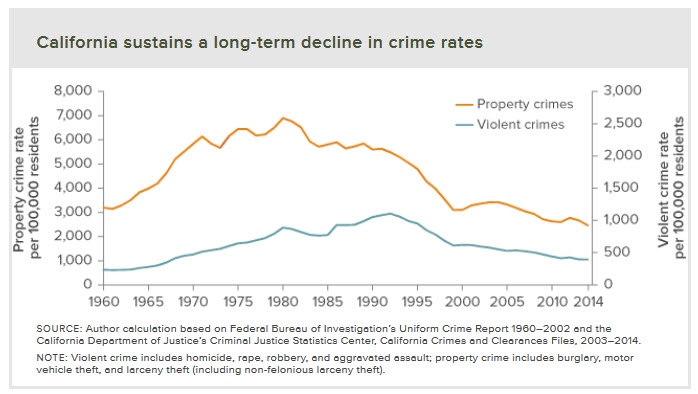 As Yolo County Public Defender Tracie Olson told the Vanguard, “In recent years, California has experienced significant criminal justice reforms.  Each time, opponents have argued that public safety is at risk.  Each time, data has not supported these claims.”

As she noted, the first such reform was criminal justice realignment.  AB 109 was signed by Governor Brown in March 2011 and took effect in October 2011.  AB 109 shifted to local jurisdictions the responsibility of supervising and incarcerating lower-level offenders.  While crime had initially increased, three years later both property and violent crimes were at near half-century lows.

In 2012, voters passed Proposition 36, which modified the “Three Strikes” law.  Prop. 36 required that third-strike offenses had to be serious or violent before a person could be sentenced to life in prison,  Current inmates already serving life terms for minor offenses such as petty theft and drug possession could petition the court for re-sentencing.

The Stanford Law School project looked at the recidivism rates of hundreds of persons released under Proposition 36 and found that their rates of recidivism were well below state and national averages, a mere 2 percent as compared to 16 percent of non-Proposition 36 offenders, as measured over a similar time frame.

Prop. 47, was passed by the voters in November 2014 and pushed things one step further.  Proposition 47 reduced the penalties for possessory drug crimes and many low-level theft offenses, the lowest level subset of crimes that were initially affected by AB 109.

Said Ms. Olson, “While there was reportedly an uptick in crime in 2015, local data for the first quarter of 2016 reveals that crime is trending back down again in every major city in Yolo County.  Overall, crime in the state remains at historically low levels.”

Share:
Tags:Brent CardallCrime RateJeff ReisigProp 47Tracie Olson
Previous : Analysis: Measure A Gets Key Endorsement from Enterprise
Next : A Sensible Bill to Curtail the War on Drugs

6 thoughts on “Crime Stats Down Across the Board in Yolo County, Allaying Fears of Prop 47 Crime Wave”