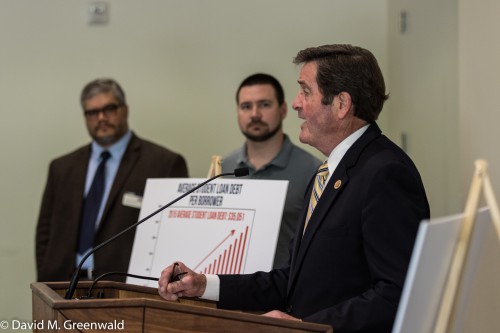 Congressman John Garamendi introduced the Student Loan Refinancing and Recalculating Act on the UC Davis campus last week. Since it was introduced, it has been co-sponsored by 24 members of Congress.

“While federal student loans are one of many tools that students can use to access college, high interest rates have made them increasingly difficult to pay back,” said Taylor Herren, president of the California State Student Association. “It’s fair to ask borrowers to pay back their loan plus the amount to cover administrative costs; however, interest rates higher than that mean borrowers spend longer in repayment and end up delaying significant purchases, such as a house, or wait longer to start a family, ultimately slowing the nation’s economy. We are grateful that Congressman Garamendi recognizes the damage high interest rates have and is pursuing legislation to treat borrowers more fairly.”

“Undergraduate students in the CSU system graduate with an average student loan debt of nearly $16,000. It’s a sign of just how out of control college debt has gotten that this is actually well below the national average. We must do better for our students,” Congressman Garamendi said. “I’m honored that CSU students are joining me in this movement to reform our student loan system. My Student Loan Refinancing and Recalculating Act is part of the solution to making sure that every qualified student in America is able to pursue their dreams.”

It is also endorsed by the Higher Education Loan Coalition, a grassroots alliance of schools dedicated to the continuous improvement and strengthening of the federal Direct Loan program.

“If this piece of legislation becomes law, you’ll be able to do so,” the Congressman said.

The bill also ensures that borrowers with an expected family contribution of less than, or equal to, $10,000 will not accrue interest on their student loans while they are in school.

The bill also ensures that borrowers with an expected family contribution of less than or equal to $10,000 will not accrue interest on their student loans while they are in school.

“The federal government owns just under one trillion dollars of student debt,” he explained.  “Forty million students across the United States – some in school, many of them have graduated – are faced with the extraordinary task of paying off their student loans to the federal government.”

He argued this would allow students to pay off their loans quicker and get about their life instead of having to pay off a loan and hold off on getting a job and buying a home.

“Congress has improved student loan refinancing since I entered Congress, but tuition throughout America continues to skyrocket,” Congressman Garamendi said. “One in 7 borrowers default on federal student loans within three years of beginning repayment. We know that 30% of Federal Direct student loan dollars are in default, forbearance, or deferment, and at least 40 million Americans are burdened by student loan debt. Congress can and should do more. The Student Loan Refinancing and Recalculating Act would save millions of students and parents thousands of dollars as they prepare for the future.”

The students facing the worst of these are graduate students who, according to Congressman Garamendi, face rates of between 4 percent and 8 percent.  “This would allow them to refinance these loans,” he said.

John Garamendi explained that this bill would create a forbearance preventing interest from accruing on the loan during school tenure.  Moreover, he explained, “For the life of me I don’t understand why the federal government would charge a fee, an origination fee on the loan.”  This would eliminate the origination fee.

The legislation will be introduced next week and it will address another problem with the system.  Currently, the government is borrowing money at 2% and lending it out at 4% and above.  He said, “The federal government will earn out of the pockets of the students, $138 billion over the course of a ten year period.”  Reducing the loan will not eliminate the profit, “but at least we’re going to reduce the burden on the students.  The federal government ought not be profiting on the students, in any case.”

“Will we succeed?  I think we must, I don’t think we have a choice here,” he explained.  “It’s wrong.  It’s just plain, I think, unconscionable that the federal government would earn $138 billion over the next ten years on the backs of students that are trying to advance their own lives.”

The Congressman said he expects to have the support of the Republicans on this bill.  He said he has already talked to Education and Labor Committee Chair John Klein.  He said they had a long conversation and “he’s very sympathetic.”  He said, “The challenge he has is, by the rules of his caucus, it has to be a comprehensive education bill – so it gets tied up in a lot of other very controversial issues.”

He was told if he could find a way to take this as a stand-alone bill, just dealing with the interest rate issue, “we could probably move it.”  On the other hand, if it gets tied up in re-writing graduate education bills – it is controversial and a big lift.

But the Congressman is confident he can get this done.