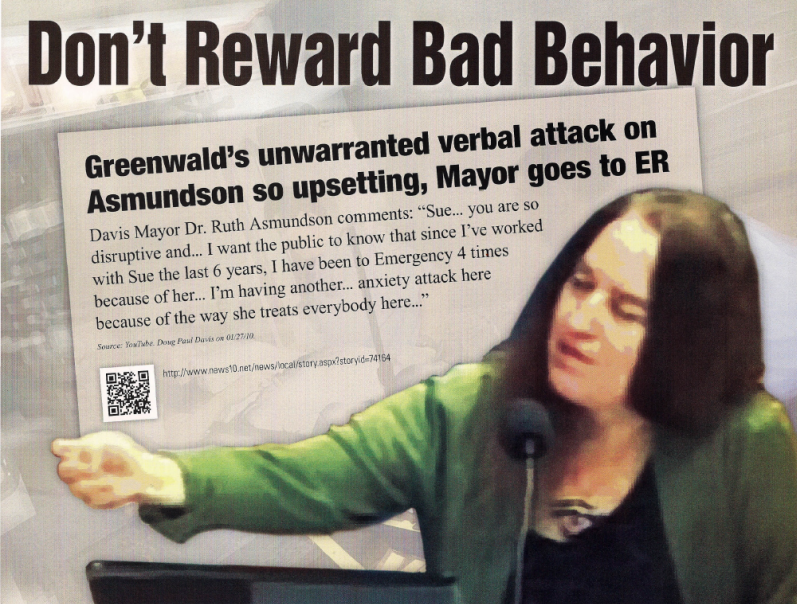 In May of 2012, an independent expenditure group backed by Sacramento-based unions the Plumbers & Pipefitters Local 447, IBEW (International Brotherhood of Electrical Workers) Local 340, and Operating Engineers Union Local 3, claiming to support Stephen Souza and oppose Sue Greenwald, sent out an attack mailer to Davis residents reminding them of then-Councilmember Sue Greenwald (no relation to this writer) and her publicized incident with former Mayor Ruth Asmundson in January 2010.

The mailer entitled “Don’t Reward Bad Behavior” referenced a 2010 Vanguard article and YouTube video.  In the end, the mailer may well have helped to take down both Councilmembers Souza (then a two-term councilmember) and Sue Greenwald (a three-term councilmember), who would finish 4th and 5th in a five-person race where the top three were elected to office.

Now it appears that the group is back.  “Residents for Responsible Development, Sponsored by Mechanical, Electrical and Plumbing Organizations” has donated about $31,000 to the Yes on Measure A campaign.

According to their filings, the group has received $25,000 each from Sheet Metal Workers, Plumbers & Pipefitters Local 447, and IBEW Local 340 – two of those groups having been behind the Sue Greenwald mailer.  All of the monetary contributions went to Yes on Measure A.

The letter stated, “On behalf of Davis Residents for Responsible Development, we submit these comments on the Draft Environmental Impact Report (‘DEIR’) for the Mace Ranch Innovation Center Project (‘Project’).”

They argued that “the DEIR does not comply with the requirements of the California Environmental Quality Act (‘CEQA’). The City may not approve the Project until an adequate DEIR is prepared and circulated for public review and comment.”

According to the letter, “Davis Residents for Responsible Development (‘Davis Residents’) is an unincorporated association of individuals and labor organizations that may be adversely affected by the potential public and worker health and safety hazards and environmental and public service impacts of the Project. The association includes Patrick O’Brien, Jorge Gomez, the International Brotherhood of Electrical Workers Local 340, Plumbers and Pipefitters Local 447, Sheet Metal Workers Local 104, and their members and their families who live and/or work in the City of Davis and Yolo County.”

They add, “Individual members of Davis Residents and its affiliated organizations live, work, recreate, and raise their families in Yolo County, including the City of Davis. They would be directly affected by the Project’s environmental and health and safety impacts. Individual members may also work on the Project itself. They will be first in line to be exposed to any health and safety hazards that exist onsite. Davis Residents has an interest in enforcing environmental laws that encourage sustainable development and ensure a safe working environment for its members. Environmentally detrimental projects can jeopardize future jobs by making it more difficult and more expensive for business and industry to expand in the region, and by making it less desirable for businesses to locate and people to live there.”

The letter went on to detail deficiencies in the DEIR for the MRIC.

According to Tim Ruff, the project manager for Nishi, this was simply an effort by the unions to play hardball.  Basically they demanded a contract with the developer or threatened to challenge the CEQA analysis in court, thereby slowing down the project.

Mr. Ruff told the Vanguard, “We have a deal with a small union on the commercial component to use them during construction.”  But he added, “We welcome their expertise on our commercial product and support good local jobs.”

He believed that “Mace Ranch decided not to use any Union so they try to make a hassle out of the EIR.”

Mr. Ruff believes the two actions are completely independent. He believes they would have filed complaints against the Nishi EIR had they not agreed to use union labor on construction of the commercial component.

While Mr. Ruff believes that Mace had not agreed to play ball with the unions, sources familiar with the MRIC project said that any thought of using union labor on construction was premature because, at the point where the project was halted, there was no formal project. It was believed that, once a project was submitted, talks would have opened up on a potential project labor agreement.

In the meantime, however, the unions attempted to force MRIC’s hands with the letter to the city.

52 thoughts on “Groups That Helped to Take Down Councilmember Greenwald, Back in the Fray”