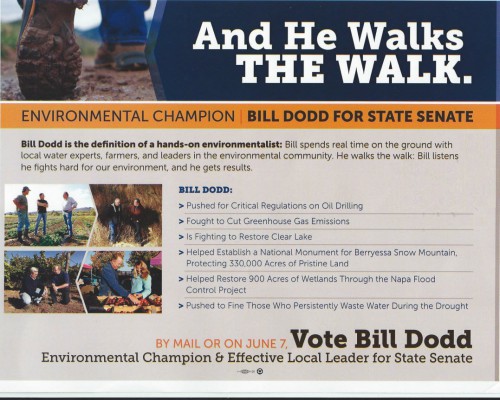 Independent expenditures (IEs) in local legislative races seem to be fueling a belief that there is no real “independence” between IE committees and the candidates they support.

Republican Assembly candidate Charlie Shaupp summarized the law on IEs in a comment on Tuesday: “As you know, as a candidate I cannot solicit help in the form of an independent expenditure (IE), either  to help my own campaign, or attack others in my race.”

But this season’s IE ads seem to be leading people to the opposite conclusion, or at least creating doubt in their minds about the independence of IEs.  Bob Dunning may have hit on one of the reasons for this when writing about an EdVoice IE for Bill Dodd:  “I mean, he may not have anything at all to do with these fancy full-color brochures, but he sure does like to pose for the photos contained therein.”

So where exactly does campaign finance law draw the line on independence?

The Political Reform Act, which governs campaign finance in California, says that the line of independence is crossed if an expenditure is made “at the behest of the affected candidate…” (Gov. Code sec. 82031.)  This term is defined as:

“…under the control or at the direction of, in cooperation, consultation, coordination, or concert with, at the request or suggestion of, or with the express, prior consent of the candidate…”

The regulations provide further detail. For example, an IE ad which results from discussions about content, timing, audience or other factors between the candidate and the producers or funders of the IE is an expenditure made at the behest of the candidate.

In fact, the regulations include situations where the Fair Political Practices Commission (FPPC), the agency that enforces the Political Reform Act, presumes coordination, including:

– Where the candidate’s campaign provides the IE committee with campaign information like campaign messaging strategy, planned expenditures or polling data.

– Where the IE committee and the candidate use the same campaign consultant or fundraiser.

However, the FPPC will not presume coordination just because the candidate provides a photograph, biography, position paper or press release for an IE ad.

So, if Bill Dodd gave photos to EdVoice for its IE ads, the line of independence was not crossed. But, if he participated in the planning of the ads or provided polling data to EdVoice, there could be a problem.

So what is the risk of an expenditure that is not independent?  It becomes a campaign contribution which, if it exceeds contribution limits, could be a violation of the Political Reform Act by both the IE committee and the candidate.

So, to play it safe, campaigns could find a way to provide photos or videos indirectly to IE committees.

There was a highly publicized example of this earlier in the year at the federal level, where the rules are essentially the same as in California.  Ted Cruz posted 13 hours of raw footage to his campaign website for IE committees to download and use in video ads.

Have local candidates taken a similar safe route? It’s hard to tell. But whether they did or not, voter perception may be more important than the legal analysis.

Leanna Sweha has been a resident of Davis for over 20 years.  She is a member of the Davis Vanguard Editorial Board and an attorney specializing in environmental, agricultural and natural resources law.  She has worked for the California Resources Agency and the UC Davis Office of Research.

One thought on “Independent Expenditures and “Independence” in Local Legislative Races”