The keynote speaker for this year’s event was former MSNBC Commenter Melissa Harris-Perry, herself a professor, and her older sister a deputy public defender in San Francisco.

During her speech, Ms. Harris-Perry chronicled the rebirth of racial incidents, starting in 2005 with the treatment of refugees in the aftermath of the Katrina hurricane that happened to coincide with the election of Barack Obama, the first black president.

However, she would argue that none of the racial tension should come as a surprise to Americans, with the history of the treatment of blacks and other minorities in this country.

For her, she presented two questions:  “Do black lives matter?  And if they matter, what might look different in our country?”  She would argue that, while “race is NOT real,” the concept of “blackness” is constituted by the problems black bodies cause for abstract American ideals.

She said we need a more inclusive definition but added that “it would have included his body because we understand at all moments of American history, a person born to a student from Kenya would have been enslavable, would have been Jim Crowed.”

She put forward another definition of blackness: “Blackness as constitutive of this identity of being problematic.”

She derived this from a quote from W.E.B. Du Bois: “Between me and the other world there is ever an unasked question: unasked by some through feelings of delicacy; by others through the difficulty of rightly framing it. All, nevertheless, flutter round it…How does it feel to be a problem?”

“There is no set of privileged identities that keep a human being from having problems,” she said, acknowledging that white people have struggles too and they shouldn’t be discarded.  “No amount of whiteness, heterosexuality, maleness, wealth, Cis identity, will keep a human being from experiencing life that also has problems.”  She said, “The human condition is to have problems.”

“Steve Jobs died young, human beings have problems,” Ms. Harris-Perry said.  But Du Bois “doesn’t say people have problems, he says, how does it feel to be a problem?”

The key point, she said, is not that we have problems, that is part of the human condition.  The problem of blackness as W.E.B. Du Bois defines it is, “How does it feel to be a problem?”  For example, “You go to sit down at a lunch counter and you create a problem by entering into that space.”

This definition of blackness has the advantage that it extends beyond what we normally think of as blackness.  “Transbodies are black in a kind of ontologically black way in that they create a problem for gender identity.”  She noted that we can identify genitalia from an early age and predict whether a baby will develop a penis or vagina, and that’s how we engender a baby.  “If we take trans-identity very seriously it creates a problem for us because then we say, what are you having, and I’m like I don’t know, maybe around 12 they’ll let me know.”

She goes on to say, “What black bodies do is they disrupt and cause problems for our understanding about what the American project is.”

“One of the biggest objections I have this election cycle is the idea that Mr. Trump is somehow doing something to the American ideals,” Melissa Harris-Perry explained.  “That he is somehow disrupting the thing that is America.  That America up until this moment has been all about soaring ideals of togetherness, pluralism, diversity, freedom, meritocracy, goodness, inclusion.  And somehow poor Mr. Trump has come along and just destroyed that.”  She said, “The way that we disrupt that little fairy tale is blackness.”

She said, “Black bodies give lie to the idea that America has always been about these big ideas.  Black bodies, over and over again, challenge the idea about what America is.”

She argued that in some ways America truly is a country founded on freedom and that “I don’t want to suggest completely that it’s not.”  She read from the Declaration of Independence and argued that it is a beautiful sentiment and something to strive for, but the idea that that is what America was in 1776 “is given lie by the black bodies.” 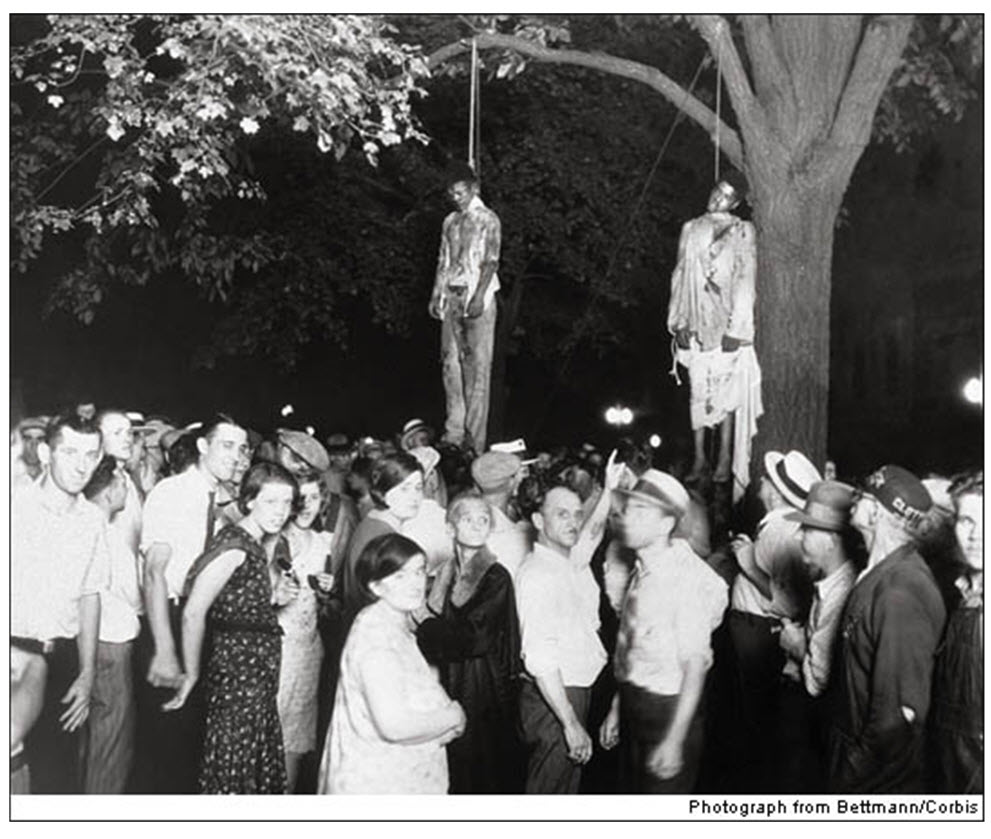 She made the argument that lynching is largely a function of citizenship rather than slavery.  She told the audience that she wanted them to look at the faces of the lynchers here, “because you can see them.”  The story that we tell is that people came in the night with their faces hidden.

The hardest part of this picture, she said, is the couple who are affectionately holding hands as they pose for the photo.  She described the scene from the trial of the murder of Emmett Till where the wives come out and rest their heads on the shoulders of their husbands.  Till was just 14.  “That action was always the hardest for me to take,” she stated.  “That little act of love, of affection, in the midst of such brutality.”

“I just want you to see so that the next time when someone tells you that what America is doing at the Trump rallies is the first time – no sir, no m’am.  Don’t you dare behave as though Mr. Trump is an aberration,” she said. 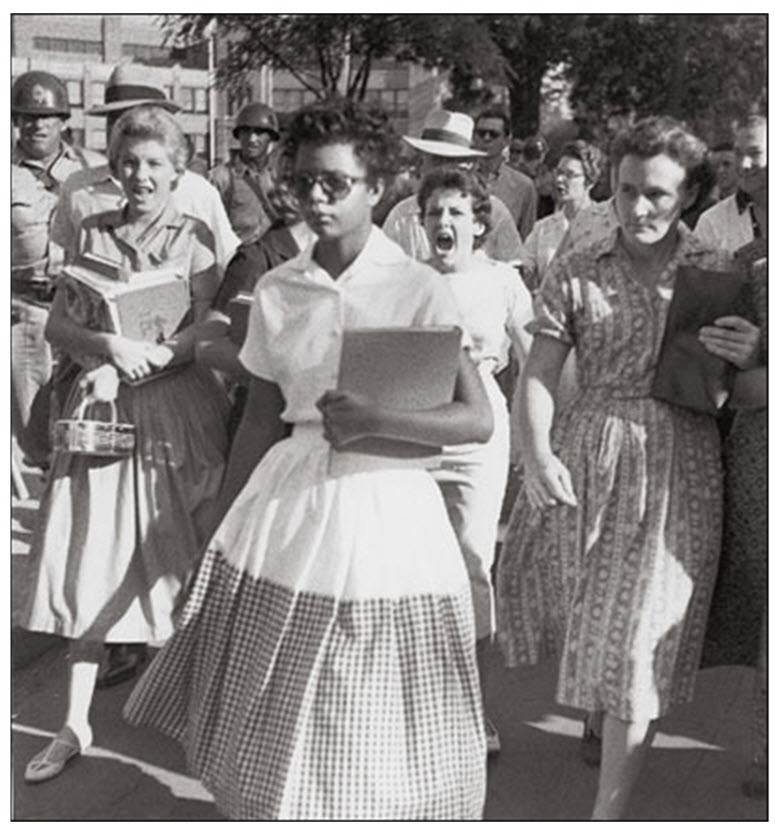 This is Elizabeth Eckford.  She said that the reason that Elizabeth Eckford is the only one of the Little Rock Nine “who finds herself in the mob,” is that she was the only one who didn’t have a private phone at home – she was more working class than the rest of the kids.  The other eight decided to meet somewhere else through a phone call.  “She ends up not getting the call,” she said.

Ms. Harris noted, “It’s also important to know that Elizabeth made that skirt herself.”  She said, “Who are we that we follow the girl that made the skirt herself to go to school.  And we screamed at her.”

“This was ten minutes ago,” she said.  “The idea that we’ve had some robust democracy for some long period of time is also simply not true.  This idea that we have this functioning justice system – not true.”

Melissa Harris-Perry then traced a history starting in 2005, after Hurricane Katrina, of incidents impacting blacks. 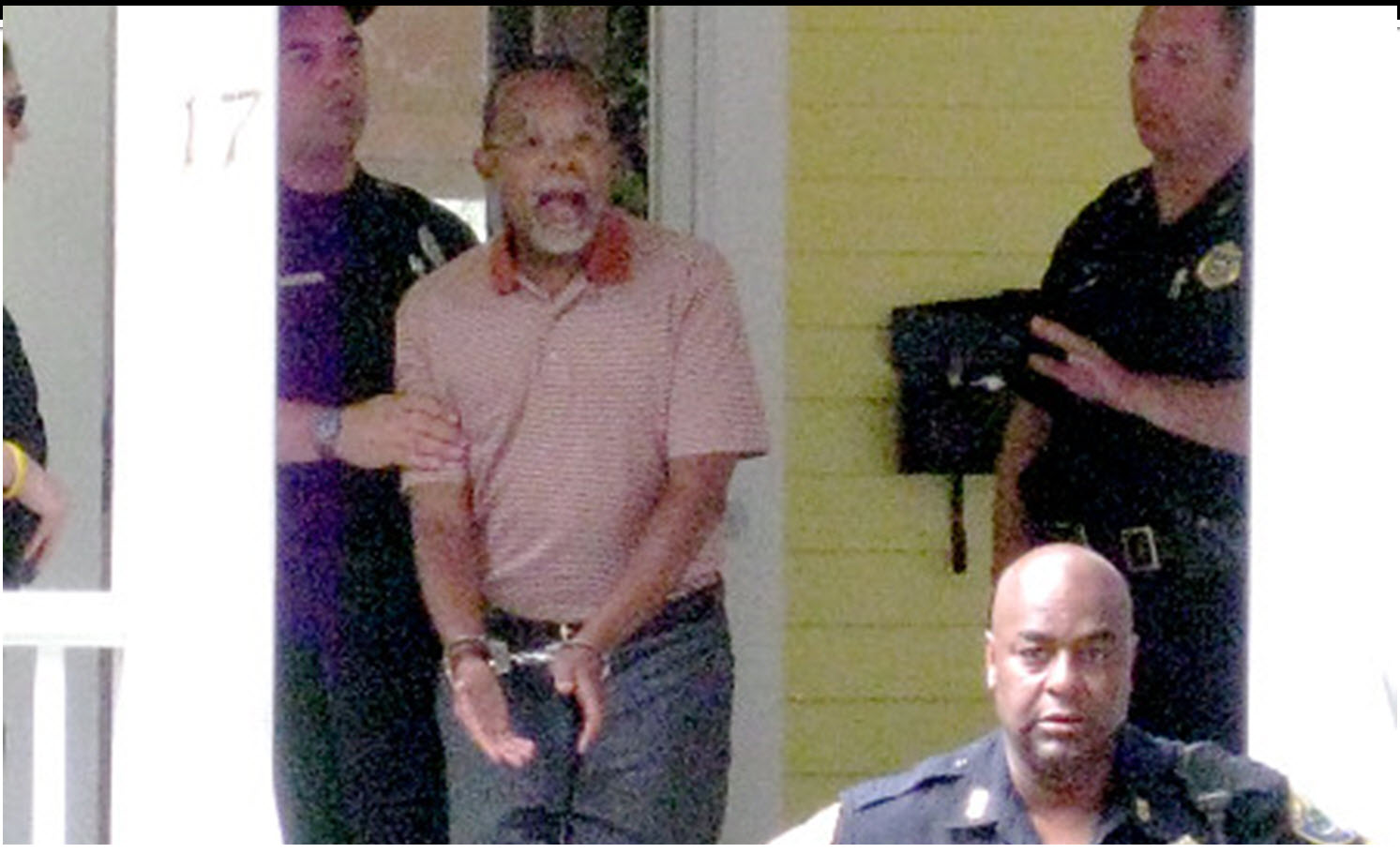 She highlighted the incident involving Skip Gates, who had just had a huge fundraiser for Barack Obama in 2009 right after he was inaugurated.  For Melissa Harris Perry, the incident where Gates was arrested in front of his own home after he couldn’t find his keys was a message to black America that things hadn’t changed.

She went through a long list of black men and women killed by the police. 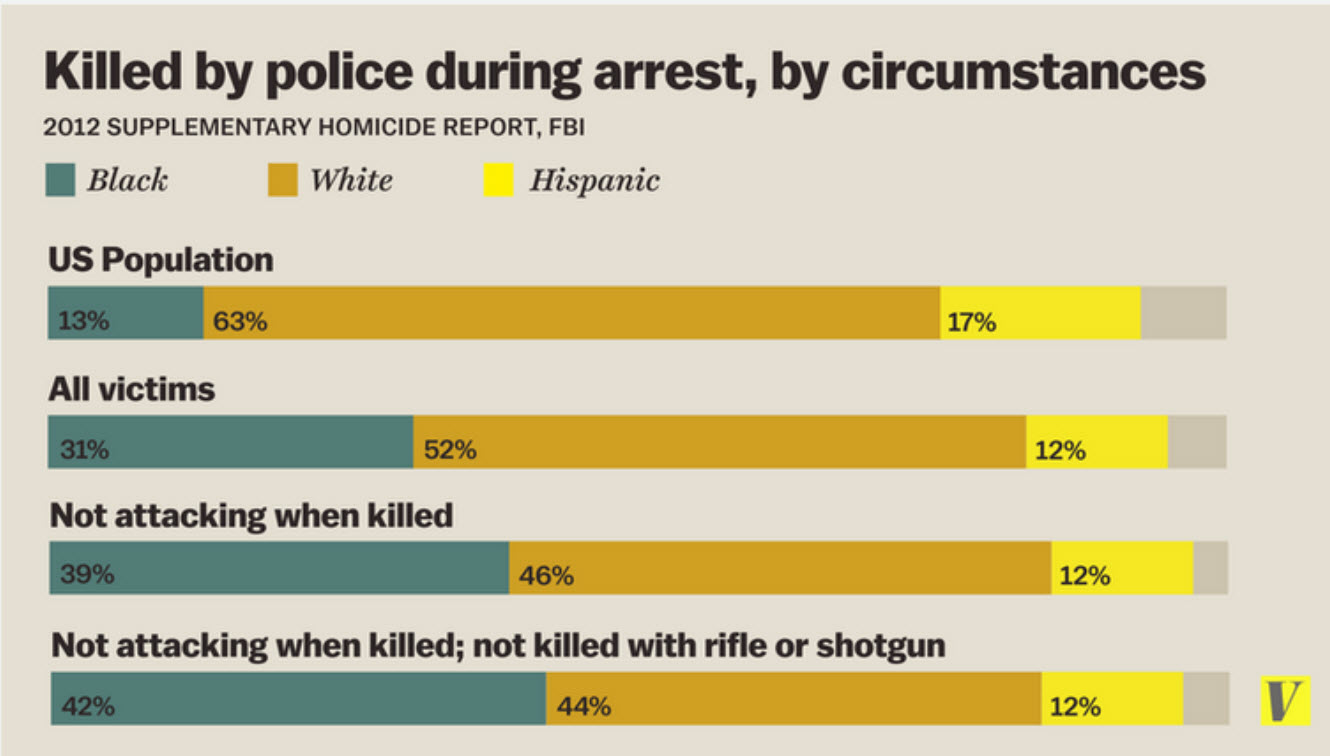 Melissa Harris-Perry went back to discuss what matters and noted that you cannot read a story about the civil rights movement without reading about the impact of the Jet Magazine story about Emmett Till.  “The impact of Mamie Till’s decision to open Emmett Till’s casket and let the world see what lynching looked like was world-changing.”  “Not because lynching hadn’t been going on, but because somehow it mattered to us to see it,” she said. 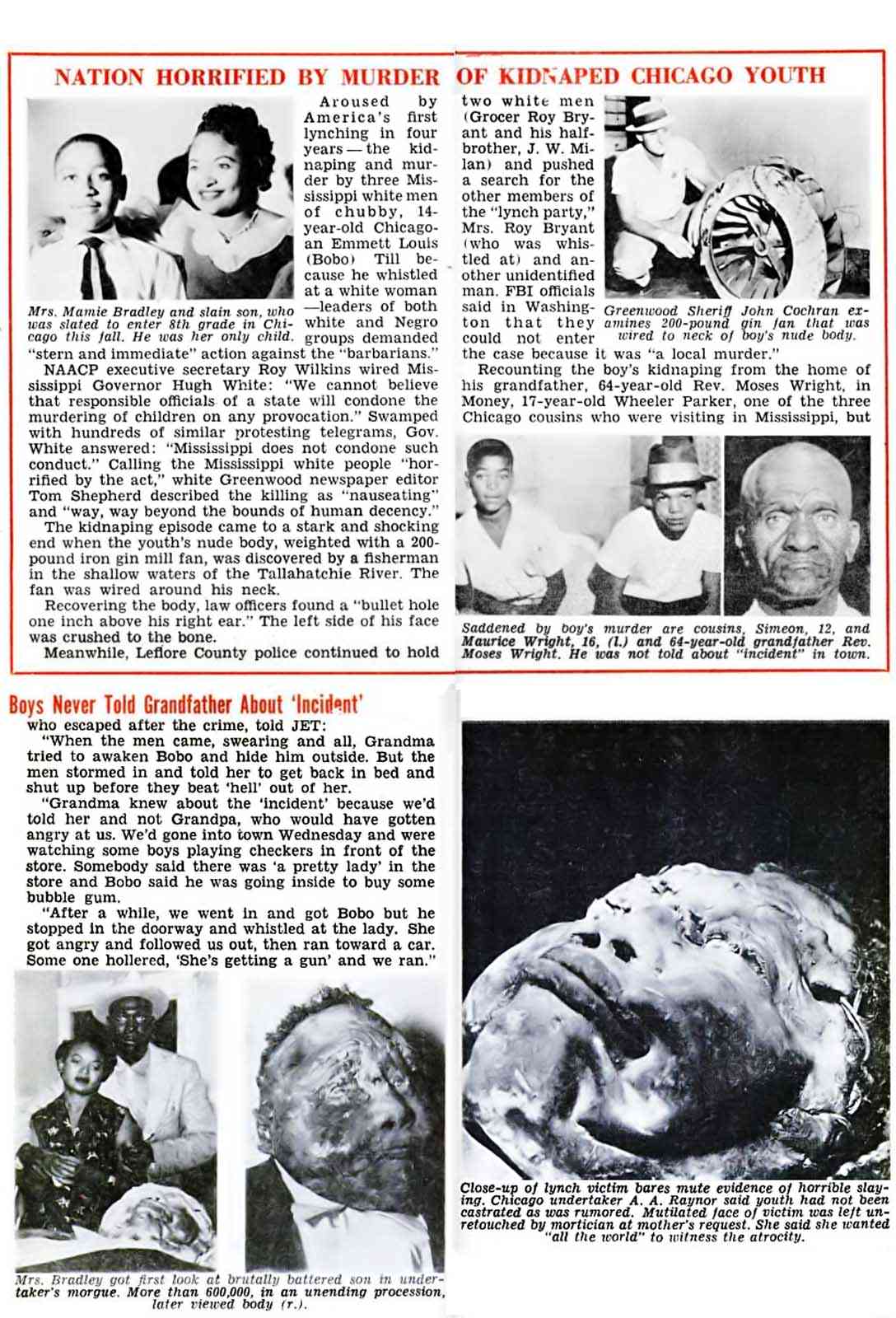 She also argued that the brutality in Selma in 1965 against the demonstrators shifted public opinion, helping to make room for the passage of the Voting Rights Act of 1965. 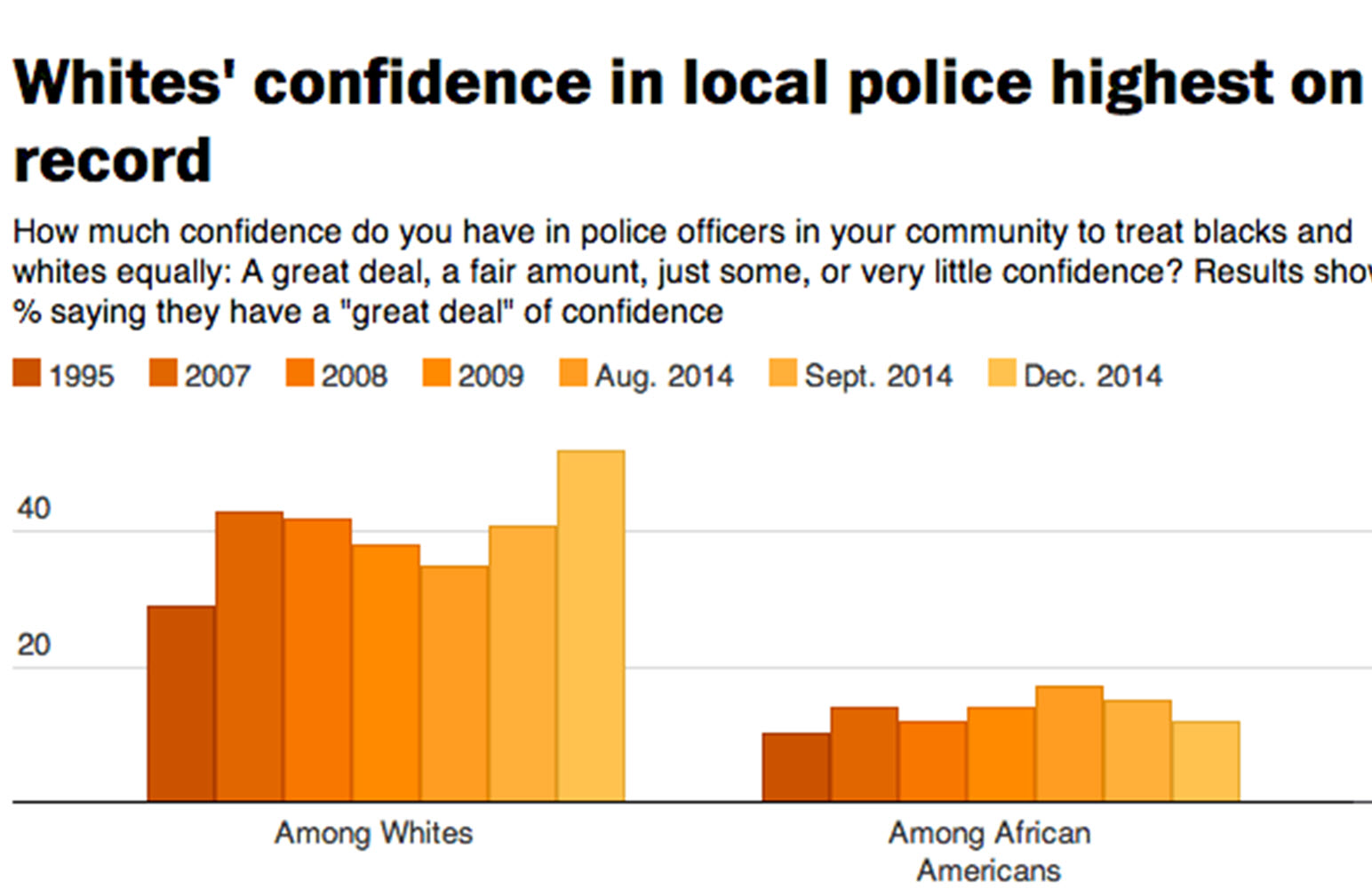 She noted just how large the racial gap was.  “Consider that across this period that I’m showing you about these deaths… in December of 2014, among white Americans that going back to 1995, that white Americans are recording the highest confidence in local police on record.  Not only are black folks experiencing this sense of siege and brutality, but their neighbors, yeah we’re feeling okay about this.”

She repeated, “Race is not real in some biological way – it is not about like blood coursing through your body, genetic material making it impossible for us to see one another.  But that experience of being a problem, of actually in your body, constantly challenging the very thing that the state is versus wanting to believe that what your country is is freedom, democracy, meritocracy, creates such an enormous perceptual gap that this experience of encountering this state – of even seeing when we look at this.”

“C.P.D.’s own data gives validity to the widely held belief the police have no regard for the sanctity of life when it comes to people of color.  Stopped without justification, verbally and physically abused, and in some instances arrested, and then detained without counsel — that is what we heard about over and over again.” – Chicago Police Accountability Task Force Report.