If this were the end of the year and we were Time Magazine, our inclination would be to name “UC Davis” as the person of the year.  The university is certainly dominating regional headlines and even getting national attention in ways it would just as soon not.

As some are aware, UC Davis has been undertaking its Long-Range Development Plan (LRDP), which is akin to a city open space plan.  The University of California made its own unfortunate headlines when an audit report showed that it was increasing enrollment of non-resident students in an effort to increase tuition revenue, and at the expense of California residents.

In an effort to rectify the situation, the California legislature reached a deal whereby UC would receive $25 million from the legislature in exchange for taking on another 5000 California residents annually.

This has a trickle-down effect locally, where UC Davis has been expanding more rapidly than it can supply housing.  The city of Davis, with strong growth control measures, has not built a lot of student housing recently to accommodate that growth, and as a result has a vacancy rate of 0.2 percent.

The city is looking at potentially 1500 beds at Nishi, somewhere around 700 to 750 at Sterling and Lincoln40 is potentially looking to supply some student housing.

However, the numbers we see are frankly staggering.

At the April 4 Open Space and Habitat presentation and discussion of the LRDP, Lucas Griffith, a campus planner for UC Davis, and Andrew Fulks, the manager of UC Davis’ Putah Creek Riparian Reserve, made the presentation.

“The UC Davis LRDP is a comprehensive land-use plan that will guide physical development of the campus to support its teaching, research, and public service mission into the future. The 2017 – 2027 LRDP is an update of the 2003 – 2015 LRDP. The LRDP update attempts to accommodate sizeable growth in the university’s student, faculty and staff populations while at the same time promoting compact growth, creating desirable places for people to learn and interact, and advancing the university’s sustainability goals, socially, academically, financially and environmentally. “

The bottom line: “The university expects to add 9,000 staff, students and faculty to its population over the 10-year planning period, and the university will not be able to house them all on campus,”

The latter part we had heard last fall when Bob Segar made a presentation to council stating that UC Davis would not be able to provide housing for all new students.  But the 9000 number is staggering.

The reality is, as we have seen, the university really doesn’t answer to anyone.  The chancellor’s saga saw eight legislators call for resignation and it was only when President Napolitano decided that the facts supported action that she moved. The state audit showed the university advantaging non-residents at the expense of residents, and yet the legislature had to effectively bribe UC with $25 million in order to get them to take on just 5000 more students.

Some have suggested there are ways that the city can pressure the university – I remain skeptical.  One of the biggest challenges for the next council will be to figure out how to meet growth demands within the framework of growth control policies in the city. 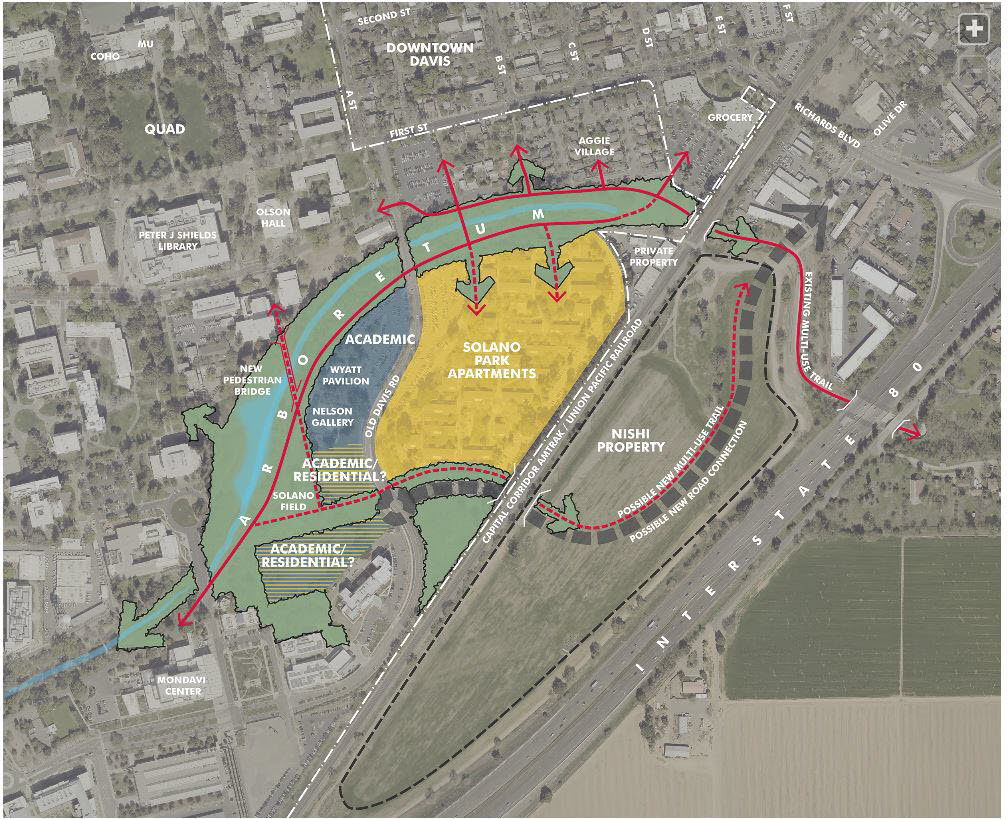 One place where the university is contemplating growth is the Solano Park area.  Right now Solano Park has low density student housing.  Originally, the plan was to work concurrently with Nishi to co-develop Solano Park with Nishi.  However, student protests and pushbacks slowed the progress.

The LDRP map above, however, shows clearly that the university is planning to densify Solano Park and provide more student housing in a perfect location near the downtown and also next to campus.

An additional point is that, while UC Davis has probably been slower than city leaders and developers would like, it appears that they have plans in their LDRP for the undercrossing from Nishi to the UC Davis campus.

While opponents of Nishi have pointed out that UC Davis is not at the table,  proponents have noted conditions in the baseline project features that require the undercrossing as a condition for moving forward.

In contrast to the view of UC Davis not being at the table, however, is the fact that they have a placeholder on their LDRP map for the Nishi connection, as shown on their website.

The bottom line, however, is that with plans for 9000 additional students, staff and faculty over the next decade – UC Davis and Davis have to figure out how to accommodate 1000 more people a year, essentially in a rental market that is already saturated.

That is just one of the looming crises and hopefully the next UC Davis Chancellor will be more understanding of this impact on the Davis community, and work with city leadership in a way that is collaborative and in the best interests of both entities.