In a major reversal that will have far-reaching implications, UC Davis has released a revised Long Range Development Plan that will now accommodate 90 percent of enrollment growth with on-campus housing.  The plan “refines the initial planning concepts shared with the community over the past six months and reflects the collaborative engagement with senior city staff and council leadership, as well as valuable community feedback regarding enrollment growth and local housing capacity.”

UC Davis has announced it will grow by around 9000 students, faculty and staff in the next decade.  The bottom line, as recently as April, was: “The university expects to add 9,000 staff, students and faculty to its population over the 10-year planning period, and the university will not be able to house them all on campus,”

During the engagement process, one of the main concerns voiced by the community as a whole was the local housing capacity for students. “UC Davis planning staff have been meeting with senior city staff and council leadership since the beginning of the process to understand goals and concerns about absorbing sizable student housing growth in the Davis community,” according to the report from the UC Davis News service.

During the outreach process, the city worked hard behind the scenes, with Mayor Pro Tem Robb Davis, City Manager Dirk Brazil and Community Development Director Mike Webb doing much of the heavy lifting.

According to one source, a key barrier to an agreement was Chancellor Linda Katehi.  Once she was out of the picture, the university was much more responsive to the city’s concerns.

That pushes capacity to provide 40 percent of the students on-campus housing, which comes close to the number the university had originally agreed to in an MOU between the city and university.

He said, “After my election, I requested regular meetings with University staff to discuss issues of mutual concern. When The LRDP process got started, university staff met with Dirk, Mike and me and we laid out our strong preference for the most aggressive housing approach they could provide.”

While it took some time, the work has borne fruit.  Robb Davis told the Vanguard, “They were very receptive and have been responsive to our needs. It has been collaborative, frank and fruitful. I am very gratified with the direction they are taking and think it lays the groundwork for good collaboration on a range of critical issues going forward. We are moving together in a very positive direction.”

The need for student housing remains, as the city only has a vacancy rate for apartments at 0.2 percent, but this is a game changer in terms of overall growth pressure on the city. 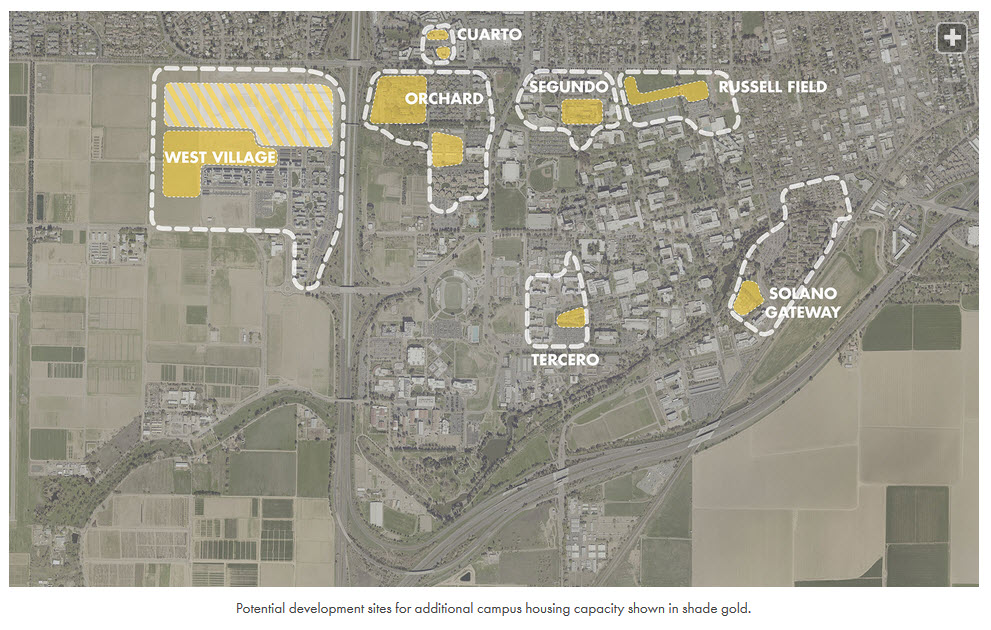 UC Davis says it is committed to a compact housing configuration.  It is looking toward seven locations to accommodate the housing needs.

One of the biggest is West Village.  “Currently West Village accommodates about 2,000 people, a satellite campus for Sacramento City Community College and a collection of UC Davis Energy Efficiency and Transportation Innovation Hubs. The LRDP Preliminary Planning Scenario for West Village provides capacity for more residents than previous planned in the 2003 LRDP and potentially accommodates an additional 1,125 students on a smaller footprint than previously planned.” 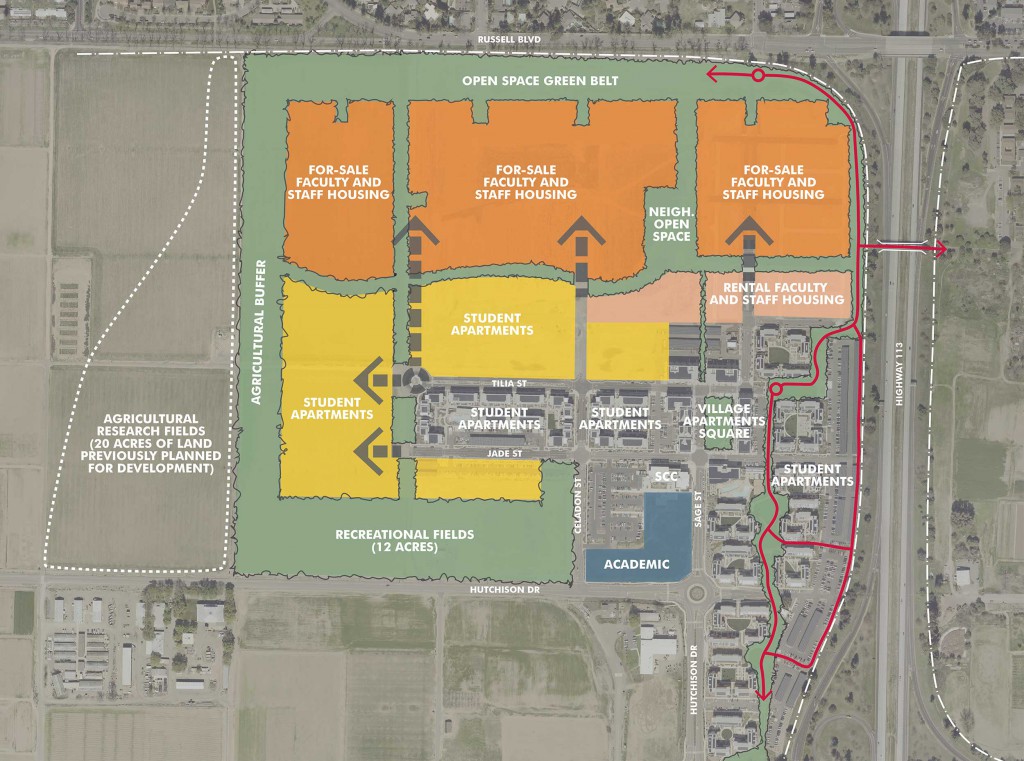 At Orchard Park, “The LRDP Preliminary Planning Scenario provides capacity for an additional 900 students with the redevelopment of Orchard Park Apartments and the greenhouses west of the Wellness Center. Much of the additional capacity for new student housing in this area will be dedicated to students with families and graduate students. The current 2003–2015 LRDP, as amended by the Regents, designates the greenhouse site as residential.”

Another area that the university is looking to add capacity would be transforming the current Russell field into housing. 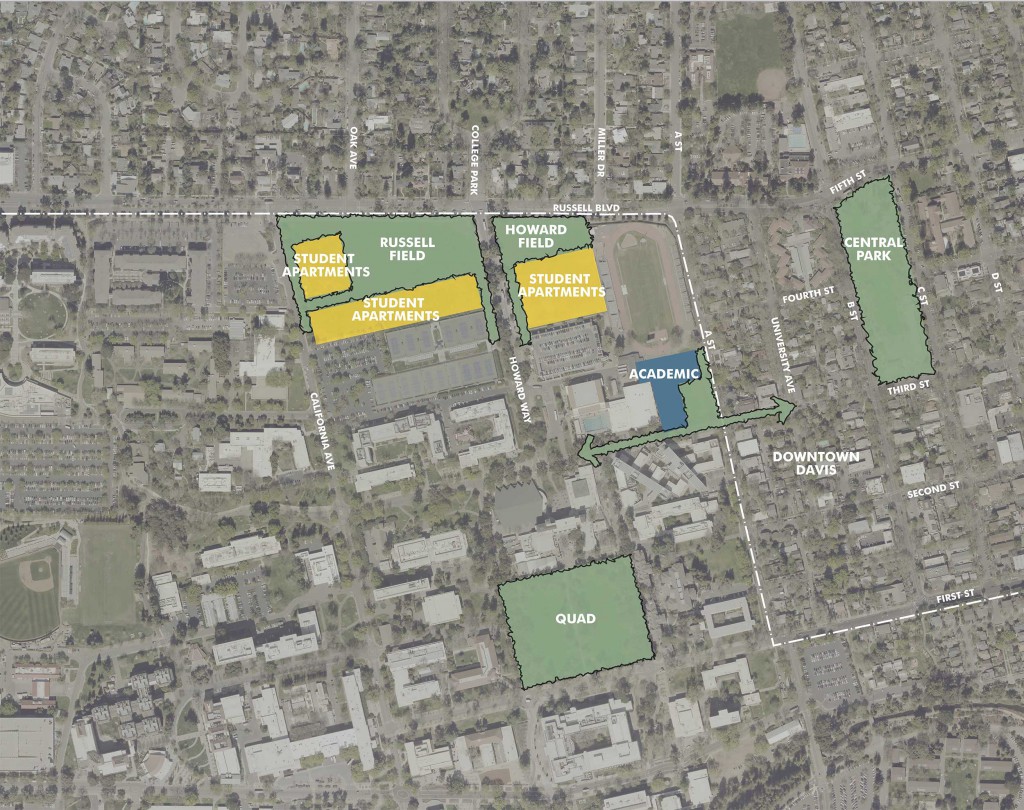 They note, “Russell Field, Howard Field and A Street Field are currently used as active recreational fields for intramurals and club sports, practice and as informal open space for the community.”

The plan calls for a potential 1000 students to reside at the redeveloped Russell and Howard field.  “The LRPD Preliminary Planning Scenario also provides capacity for additional academic building space on the A Street Field. The LRPD Preliminary Planning Scenario includes open space along Russell Boulevard and A Street and retains 3 acres of unlit natural sod surface on Russell Field. The remaining 3-acre field will continue to function as an active recreational field in the core of campus, albeit reduced in size and designated as a stormwater detention basin that will be inundated during extreme flooding events.” 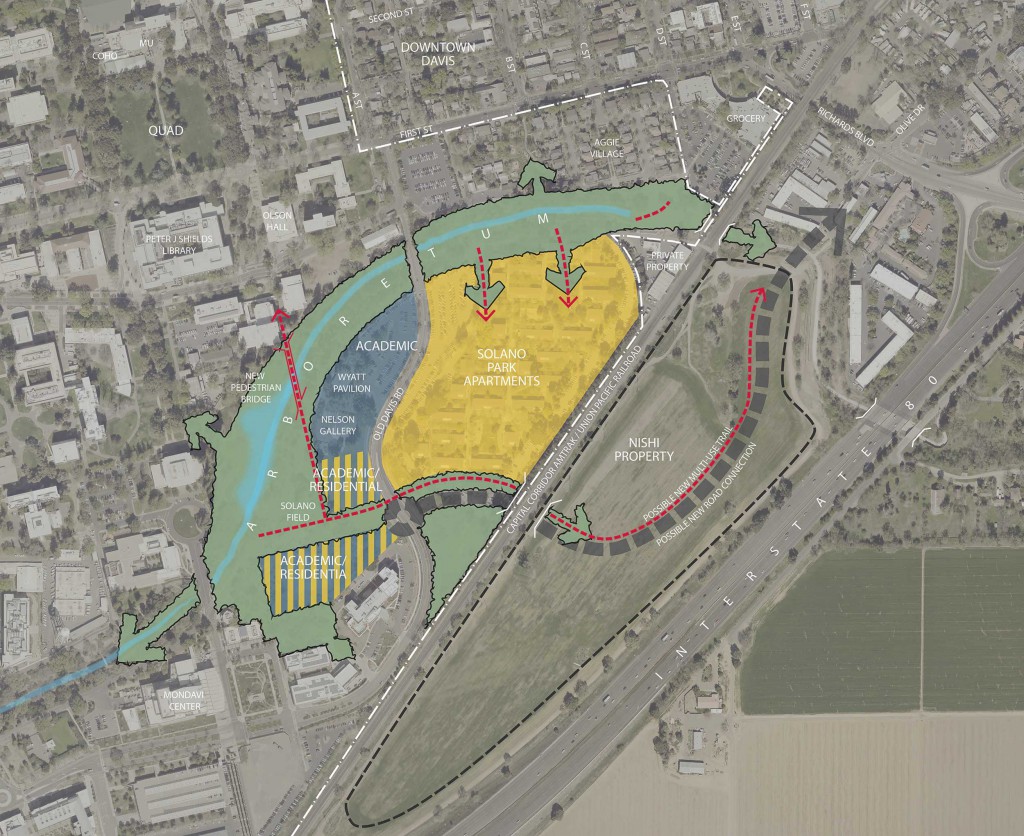 Finally, concurrent with Nishi was originally supposed to be the redevelopment of Solano Park.  That appears to be back on.  “The LRDP Preliminary Planning Scenario provides capacity for an additional 500 students west of Old Davis Road and Solano Park Apartments,” they write.

They also plan to connect to the Nishi Gateway project, should it be approved by voters.

They write, “The Plan also includes the possibility of a connection to the Nishi Gateway Project, a private development that is separate from campus, east of the railroad tracks. The University and the City of Davis have been planning collaboratively and exploring possible roadway, bikeway, and open space connections with the Nishi property, in hopes of gaining mutual advantage to the vitality of the campus, downtown and the greater Davis community. The Nishi Gateway project will appear on the City of Davis June ballot as Measure A. Campus will analyze a possible connection in the LRDP EIR in 2017.”