Don’t mess with campaign signs – seriously, you might have better luck attacking someone’s religion in Davis than messing with their campaign sign.

First, let me get this out there – as a former social scientist, I have not seen a lot of evidence that campaign signs are meaningful or effective.  I know Davis swears by them, and people often look to see who has the most signs up and where, as indicators of success, but I haven’t seen the data to support that view, and anecdotally having been involved in some campaigns prior to my days on the Vanguard, I just think it’s a lot of fuss, a decent amount of buck, and not enough return.

Aside from the usual reports of stolen signs – by both sides – in various locations, the funniest story was the report that someone put up 23 No on Measure A signs on one of the Yes side’s campaign team member’s lawn.  Supposedly there are photos of this.

Of course, one of the No on Measure A leaders said this was preposterous.  They don’t have the signs or the manpower to be able to do that and to what end?

It seems quite possible that this was an internal prank, because as the No on Measure A person points out – to what end would they do this?  However, the campaign reports that there was a police report on this. They are taking this seriously, believing that this was a kid and his mom and sister targeted, and it shook them up.

The interesting thing about campaigns is, as the time ticks down, the rhetoric gets interesting.  Everything becomes a life and death epic struggle.  Have you ever heard of a presidential race that wasn’t the most important in our lifetime?

The Nishi project at the end of the race can’t simply be a bad project – it has to be the worst project ever created in Davis.  Or, as Michael Harrington has taken to write repeatedly, it is a couple of “local developers” who are trying “to enrichen themselves by wrecking the southern entrance to our city for up to 5-10 years of construction for a measly 660 units of non-affordable housing.”

He writes, “This project is as close to a scam as any I have seen.”

Earlier this week there was an interesting exchange. Bob Dunning made the observation that he sees a lot of “No on A” signs in front of apartment complexes, and he calls this “understandable.”  He writes, “I mean, if I owned a whole bunch of apartments or a dozen rental homes, I wouldn’t want the competition either … yep, let’s keep the vacancy rate at zero and make those UC Davis students commute to their classes from Woodland, Winters and West Sacramento … on their non-polluting bicycles, of course …” 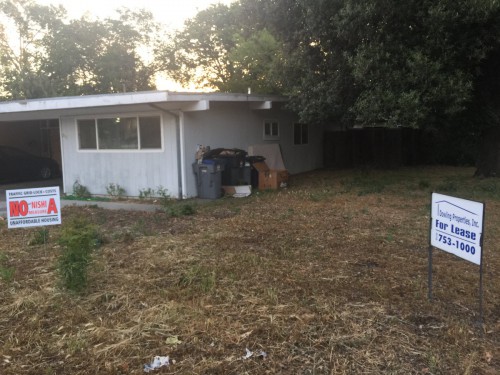 As an aside, anyone else find it interesting that No on A has the apparent support of Jim Kidd and Dan Dowling, while Michael Harrington criticizes the city’s rental inspection program as unnecessary?

Bob Dunning then really gets under the skin of the opposition by writing, “No project is perfect, and some are downright bad, but I honestly think Nishi, despite some concerns, is one of the better ones.”

Jim Leonard, who is one of the dozen or so hardcore No on A people, responded to Bob Dunning, writing, “Bob, you are making an unsupported assertion here. Upon observation and analysis, I disagree with you. Can you provide specifics for your belief in the superiority of Nishi over the other built projects? I don’t believe you and question your judgement. Convince me.”

I thought, hey, here’s a good opportunity to the extend the debate, so I wrote Mr. Leonard and asked him, “other than Village Homes (which is too easy), name one peripheral development that you think was better than Nishi and explain why.”

After pressing him a bit, he stated that Nishi is worse than Wildhorse (which was a massive subdivision that was challenged unsuccessfully by a citizen’s initiative) and Mace Ranch (which was the subject of machinations by Frank Ramos that ultimately led to the pass-through agreement).

However, he didn’t want to submit an article on this, stating, “I’m not impressed with the way the Vanguard is going these days and don’t want to draw readership to it.”

What I find interesting is that he apparently has no problem drawing readership to the Enterprise, which endorsed Measure A.

Fine.  So I asked Michael Harrington on the record, do you believe Nishi is a worse development than Wildhorse or Mace Ranch?

He responded, “Overall, absolutely yes.  Nishi is a terrible location with lack of vehicle access and toxic air.”  He added, “And the CC completely bunged up the negotiations.”

Mr. Harrington continues, saying that “the 2-1 mitigation is a basic part of the public-private bargain for these new exterior developments, and this CC completely failed to ask, let alone demand, that the Nishi developers disclose their mitigation land.  Where it is?  What is the quality of the dirt and habitat for wildlife?”

Remember, this is the case that Nishi is worse that Wildhorse or Mace Ranch.  I wasn’t around for Mace Ranch and wasn’t involved when Wildhorse happened, but I don’t think either of them had 2 to 1 mitigation.  If I’m wrong on that, someone will certainly correct me.

He continued, “The CC intentionally has attempted to gut our Affordable Housing Ordinance to give away over $11.5 million in benefits to these rich developers.  This near-secret deal was intended to slip the money to the developers to quietly help them pay for the access to their property.  This was admitted on the DV by a CC member.  How nice if you can get free money  … the question is WHY did the CC think it was OK to give away money intended to help our poor and middle class live here?”

I seem to recall a big scandal involving affordable housing and Wildhorse, and I think it was Michael Harrington in the early days of the Vanguard who tipped me off to it, where the city had failed to keep affordable housing, affordable.  So what happened was a bunch of relatives of city staffers bought the units at affordable rates and then waited the required waiting period and then flipped them on the market for market rate, turning a huge profit.

“My theory is it’s the campaign contributions and the clubby social scene that the CC has become in their anxiety to be ‘collegial,’” Mr. Harrington concludes.  “I saw the same clubby group think that caused two disastrous sets of water rates, and initial support for a water project that was hugely too large before we forced them to downsize the project from 18 to 12 mgd.  Same group think process …. Is there a social psychologist in the house with experience analyzing why lemmings go over cliffs?”

As I reported last week, I think there are legitimate concerns about the project.  Mr. Harrington, for instance, uses rather colorful language to describe the traffic situation, but reading the EIR, they note that traffic will worsen with this project even with a connection to UC Davis.  The EIR puts forward some mitigation measures that they believe will reduce the impact to zero – but at the end of the day, that remains a subjective assessment.

I think people can reasonably argue whether the project makes traffic on a key stretch of town, Richards Boulevard, better or worse, and vote accordingly.  As someone who voted against Covell Village, that project would have been far worse.  I have a lot of problems with the Cannery, would have voted No on Wildhorse and believe that the process at Mace Ranch was abysmal.

To call for the voters to vote No on Measure A is entirely reasonable; to call it the worst project in Davis is not really defensible, in my view.

152 thoughts on “Sunday Commentary: The Nishi Silly Season Is Upon Us”