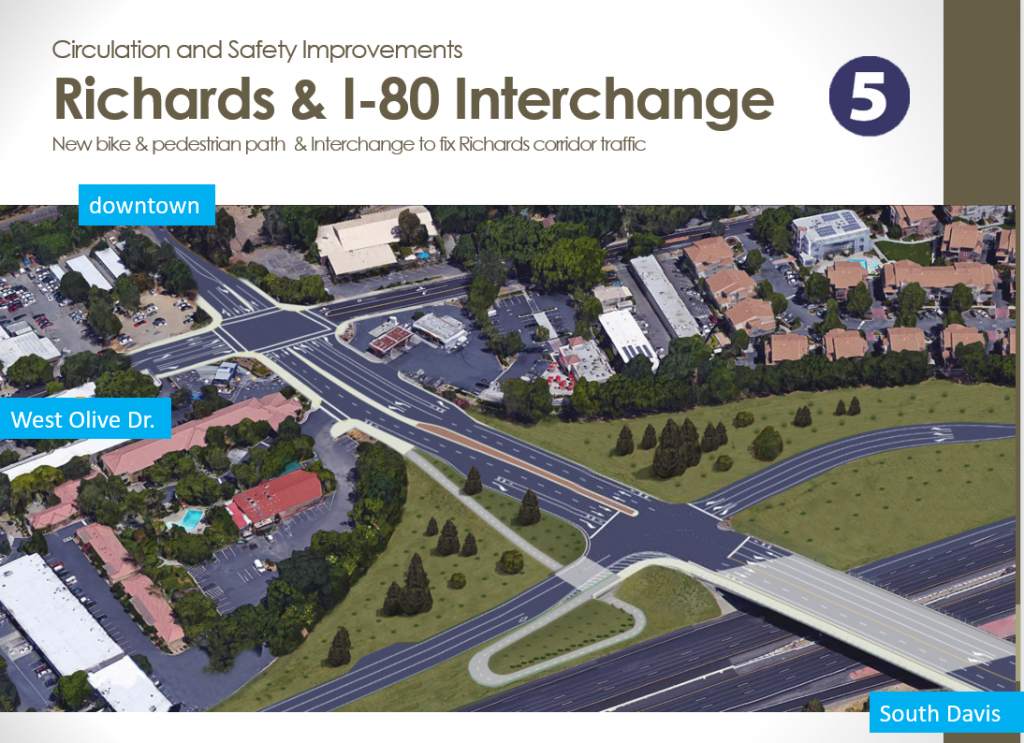 On Friday, I was a little bit ahead of schedule and so I figured I would head to Montgomery and wait there for my daughter to get out just after 11:40 in the morning.  Instead, I got a call that I could pick up a donation check back downtown.  So I drove down Richards, hitting every red light on the way until I got to the top of the overpass and stopped.

It would take me another ten minutes to get from the Richards overpass through several cycles of lights to the downtown.  The westbound I-80 offramp was backed up and jammed back to the freeway. Traffic would slowly merge one by one as it approached the Olive Drive intersection.

Midday on a Friday and Richards Boulevard is a veritable mess.  A glorified parking lot.

Now some of you reading this are saying, and we want to bring more traffic to this congested corridor.  We want to add housing and jobs, forcing more people into this area.

This is the point raised in a KCRA story: “Critics of Measure A said the development will add more traffic to the already congested area. Residents said as they make their way off the freeway and onto Richards Boulevard, they hit quite a backup while heading towards downtown.”

They quote Michael Harrington: “It would create traffic, unaffordable housing, gridlock at Richards and Olive Drive.”

He later said, “Four to five years of construction at a main entrance of the city? Why are we doing that?  For what, 640 units?”

But there is another argument here.  Michael Harrington on the Vanguard has stated that the only reason we need to do the Richards Corridor change is to accommodate the new traffic for the hotel conference center as well Nishi.  The reality is that is not true – we have needed to change Richards Blvd. for a long time.  What we lack is the money.

As Councilmember Rochelle Swanson put it this week, “If you drive around all of our roads, not just Richards, there has always been a will to improve things, there just hasn’t been money.”

The reality is that Richards needs to be fixed, with or without Nishi, however, with Nishi, we have a funding source we did not have without it.

The city of Davis has released plans to CalTrans for the Richards Corridor – something that must be completed prior to the construction of the Nishi Gateway project.

With the combination of the undercrossing at UC Davis from Old Davis Road, it is expected to be $23 million.  That leaves another $10 million for the improvements, which is expected to come from state and federal funding.

It is safe to say that, without Nishi, the Richards Corridor plan is going to have a tough time getting financed.  Thirty-three million dollars is more than 60 percent of our general plan.  It is also right around the expected yearly unmet needs allotment the city is going to need going forward.

The Vanguard has chronicled a series of problems along Richard Blvd. These problems are are exacerbated by the illogical series of freeway off ramps that funnel traffic without lights or control directly onto Richards, with the most precarious being a forced merge for westbound I-80 traffic onto northbound Richards Blvd.  This creates a back up, both on Richards and the off ramp, and puts motor vehicles, buses, bikes and pedestrians into a single-merge condition.

Developers hope that the corridor plan will alleviate at least some of these problems.

First, it will widen the westbound off ramp to three lanes, which will “prevent cars from dangerously stacking up on I-80. This will provide a smoother transition and added capacity for people traveling to downtown, campus and south Davis.”

Second, it will move the off ramp closer to the bridge, with a tight diamond to create more distance from the Olive Drive intersection.  “This will eliminate the dangerous weave conditions from the existing cloverleaf reads that conflict with cyclists.”

The new formation, coupled with the building of Nishi, will also potentially alleviate stress on the tunnel and the downtown traffic.

The plan calls for an extra lane to “turn left onto West Olive Drive from Richards Boulevard, which allows people traveling to campus to bypass the Richards tunnel entirely.”

There is skepticism of course.  There are those who believe that Old Davis Road on the UC Davis campus cannot accommodate the heightened traffic. They may be right.  This might force UC Davis to have to make their own improvements to road ways.  Or it might create a huge traffic mess on campus.

On the other hand, creating a more direct route to campus, bypassing the Richards underpass and city streets, might alleviate pressure along Richards.

There are also those who believe that you cannot fix the traffic situation by adding more housing and more business along a congested route.

This week, following the release of the plan, Vanguard readers varied in their assessment.  As Alan Miller noted, for example, “having this through campus traffic go through Nishi has been the plan by the developers of Nishi all along.  This will take much morning and evening traffic off of 1st street.  Not ‘eliminate’ as this article says, but reduce.”

On the other hand, Michael Harrington is a skeptic.  He wrote, “[A]ll this drama, all this huge expenditure of public money to totally re-do all public access roads all the way back to the freeway, to do what?  Basically add 640 apts???”

He added, “The current Nishi project is total madness, and it will completely screw up the roads in that entire quadrant of the city for years to come.”

But critics like Mr. Harrington also seem to miss that the situation already is a total mess.  Building Nishi would put $23 million of developer money and $10 million of public money – which the Mike Webb believes will be far more likely to flow to Davis with this new development – towards solving the problem.

Without Nishi, where will the money come from to fix Richards?  UC Davis is going to continue to grow at the rate of 1000 students a year for the foreseeable future – that will eventually lead to the need for more faculty and staff to support them.  That means that, with or without Nishi, pressure on Richards and other roads will continue grow.

Are there any certainties here?  No.  The critics could be exactly right, that the added vehicles will overwhelm an already congested system and that the bypass will do little to fix the problem.

What I would like see from those critics is the plan for how we fix Richards without the $33 million proposed by this plan.  They will say that they don’t have to solve that puzzle, but to people like me who could go either way on this project – a valid alternative plan would go a long way towards resolving which way to go.

Richards Blvd. is a problem, either way we go.  We are either going to gamble that the $33 million can fix it or gamble that we have another answer.  The next month will determine which way the community wants to go.

55 thoughts on “Sunday Commentary: Will Nishi Fix Richards or Make It Worse?”