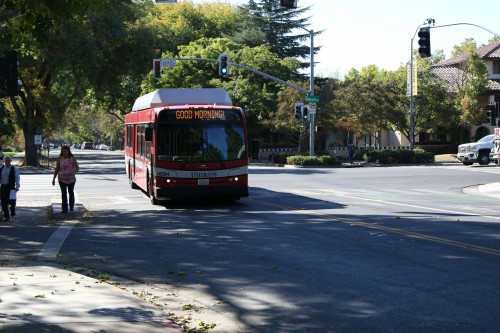 Unitrans student employees will be conducting a “Safe Space Initiative” campaign on May 10th and 11th from 9:00 AM to 6:00 PM.  Unitrans has always taken pride in the safe and friendly service it provides to the community, and this campaign initiated by a group of student employees will help Unitrans to raise awareness about passenger safety and ensure that the public knows their rights as passengers on board any Unitrans bus.

After a recent event where a passenger was verbally assaulted by another passenger with hate speech, Unitrans student employees initiated this campaign to assure customers that they can enjoy a safe space inside the bus, and to inform the public of the policies that drivers are trained to follow if an incident were to occur. Unitrans student employees will emphasize ways to empower passengers to take an active role in keeping their buses safe, as well as increase awareness about the resources drivers can provide. There will be booths set up at both the Memorial Union and Silo Terminals with information materials, as well as on the buses. Not only is this campaign is an opportunity for the public to learn more about passenger safety, but it is also a celebration of the community of Davis and Unitrans passengers.

“We believe in the community here in Davis, and want to support it,” said Breanna Pasqua, Unitrans human resource manager and driver. “We take our responsibility as drivers seriously and eagerly accept the opportunity to contribute to our community and to continue to make our passengers feel safe.”

Drivers work hard to maintain a safe environment on board the bus for all. “As a driver, my main concern is the safety of my passengers and the people around me while driving. My focus is on the road and it is difficult to observe what is going on behind the driver’s seat,” said Devon O’Shea, Unitrans driver. “If an incident was to occur or if a passenger is uncomfortable, I would want them to tell me what is going on so I can do my job and help them feel safe. This is why this campaign is so important; everyone deserves to feel safe on public transit and I can’t help my passengers if I don’t know something is going on.”

Passengers are encouraged to enjoy the materials on board the busses and at the terminals and approach drivers with any questions.

Unitrans was founded in 1968 as the University Transport System, when the Associated Students of UC Davis purchased two vintage London double decker buses to operate on two routes. In 1972, Unitrans was opened to the general public, with partial funding from the City of Davis. Since that time the ASUCD/City of Davis partnership has continued, and now Unitrans provides public transportation service to the entire city with 49 buses on 20 routes, carrying over 3.9 million passengers/year (over 22,000 on a typical day). Unitrans currently employs 250 UC Davis undergraduate students, of which approximately 160 are student transit drivers.

This campaign is put on by a small group of seniors for a class project at the University of California, Davis alongside the employees of Unitrans marketing department. Members of the group include Susanna Chang (student and frequent Unitrans passenger), Devon O’Shea (student and Unitrans driver), Breanna Pasque (student, driver, and human resources manager at Unitrans), and Hector Solis (student, driver, and supervisor at Unitrans).