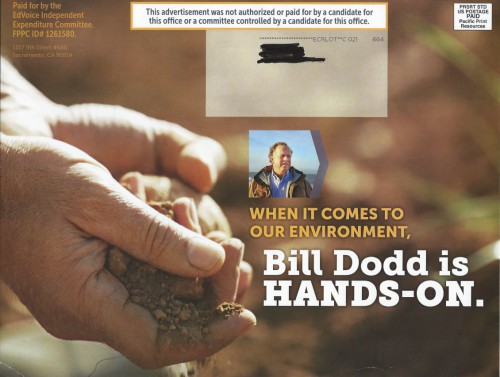 Earlier this week, the Vanguard gave its race projections, seeing Bill Dodd as the favorite to win the state Senate race and Dan Wolk and Charlie Schaupp as the most likely to emerge in the Assembly race for a November face off.

That opened an interesting door with regard to machinations by backers of Independent Expenditure campaigns, trying to push Cecilia Aguiar-Curry into a November position.

Charlie Schaupp, the Republican Assembly candidate, noted that “my sources told me in the Senate race Coppes and Yamada are leading, followed by Dodd.”  While the Dodd campaign emphatically denied the accuracy of his comment, a source in the Yamada campaign claimed that polling shows the former Assemblymember consistently polling ahead of Mr. Dodd.

On Friday, the Davis Enterprise came out with its legislative endorsements backing Dan Wolk, Bill Dodd and John Garamendi.  The Yamada campaign told the Vanguard that they were told by the Enterprise there would be no interview for that endorsement.  Apparently they had made up their mind on Mr. Dodd well before this point.

The Enterprise writes, “Don’t let that avalanche of political brochures in your mailbox sour you on Bill Dodd’s candidacy for the 3rd California Senate district. In just two short years in the Assembly, Dodd has demonstrated that he’s a pragmatic politician who can work both sides of the aisle to deliver what his constituents need.”

However, the candidates in the Assembly race confirmed that the Enterprise had all five candidates, including Charlie Schaupp and Mark Kropp, in the same interview room when they determined whom they would endorse.

The Enterprise editorial leads with the Davis mayor, about whom who they write, “Enthusiasm, integrity, a willingness to work hard and the ability to collaborate for a common goal — these attributes are key to an effective legislator. And they’re what make Davis Mayor Dan Wolk so good at his job that he’s ready for the next step in his political career.”

We have to wonder if the Enterprise editors have watched the same meetings that others in the community have.  Several of his colleagues have complained that Mr. Wolk shows up to meetings unprepared, rarely having read the staff reports and, while he has done a fine job of facilitating the meetings, he rarely adds substantive comments to them.

On the integrity front, even his supporters acknowledge, at least in private, that he got rolled by the soda industry just two weeks after both publicly and privately supporting the soda tax.  Worse yet, he completely ignored calls to recuse himself from the Cannery discussion two weeks ago, despite having accepted more than $20,000 in campaign contributes from The New Home Company and its employees in his two runs for Assembly.

The Enterprise continues, “In Davis, he’s already tackled many issues that are important to our region, from renewable energy to a safe water supply, from healthy families to bicycle infrastructure.”

While that is not exactly a long list of accomplishments, it is worth noting that, even here, his actual contribution is mixed and at times peripheral at best. Renewable energy? What has he done while he is on the council?  His biggest victory on the healthy family front was the default beverage measure which is more than undermined by his opposition on the soda tax, and his contribution to bicycle infrastructure is question with his lack of support for putting a second grade-separated crossing into the Cannery.

Agree or disagree with them on the issues, both Don Saylor and Cecilia Aguiar-Curry have a far greater cachet of legislative accomplishments.  As one commentator has quipped, while Dan Wolk was removing sugary beverages from the menu of fast food places, Cecilia Aguiar-Curry was bringing in a PG&E training center to Winters.

Meanwhile, Bob Dunning argues, “I’m doing my best to be fair, because I don’t have a dog in either of the legislative fights facing Davis voters, be it for an Assembly seat or a seat in the state Senate.”  While it’s not exactly clear what that means, he continues by writing, “But every time I get a 90-page, four-pound mailer from Senate candidate Bill Dodd or Assembly candidate Cecilia Aguiar-Curry, I can’t hide my disgust at the charade they are attempting to put over on the electorate.”

He writes, “Who knows, they may both be great people who would be superb lawmakers, but the sheer volume of these mailers makes me seriously question their judgment.”

The Vanguard has had articles that detailed the contributors to these IE campaigns (Bill Dodd and Cecilia Aguiar-Curry).  Mr. Dunning is arguing that both Mr. Dodd and Ms. Aguiar-Curry are breaking campaign laws by colluding with the backers of IE campaigns.

We will explore his evidence shortly, but I do want to point out that attacking candidates for sending out volumes of mailers is a bit unfair.  How else do you reach at times apathetic voters?  If you send one mailer, you’re probably going to be ignored.  While it’s clear that barrages of ads and mailers irritate the voters, it’s also clear that they work – that’s why they keep doing it.

He notes that this campaign is funded by oil companies including Chevron and Valero.  He writes, “How Chevron and Valero got their hands on those long-ago pictures of Cecilia’s family is anybody’s guess, but someone should tell them their favorite candidate is actually standing in an almond orchard, not the family walnut farm. But maybe she was lost that day.”

He continues, “Who knows, maybe Chevron stole the family album. Or maybe they hired an undercover guy to follow Cecilia around Winters, snapping photos every time she approached a walnut tree or a piece of fruit.”

Of course, had Mr. Dunning checked he might have found some of those very photos on Cecilia Aguiar-Curry’s website.  In the days of the internet, it is not hard to find a lot of photos.  It is certainly easier to scavenge on the web than illegally collude.

You know what, I believe Mr. Dodd.  For one thing, CTA (California Teachers Association) has stayed out of the race, something that would not happen had Mr. Dodd supported the EdVoice agenda.  For another, the 2008 race was bitter and EdVoice was handed a stunning defeat when Mariko Yamada defeated Christopher Cabaldon.

It is worth noting that neither Bill Dodd nor Cecilia Aguiar-Curry would repudiate their IE backers or call on them to stop.  But to allege collusion, even implicitly as Mr. Dunning does, seems to have little corroboration.

41 thoughts on “My View: The Legislative Races Are Finally Getting More Interesting”