Currently, the school district relies on the approximately $9.5 million dollars from the parcel tax to supply about 12 percent of district funding.  Under the LCFF (Local Control Funding Formula), DJUSD is only an averagely funded school district for California – even with the local parcel tax funding.

Starting Tuesday morning at 8:30, and continuing to a Wednesday night meeting, the school board must approve a tax resolution by June 30 in order for Yolo County Elections Office to place the measure on the November ballot.

As we have discussed previously, the “status quo” measure would call for a $620 a year parcel tax, which would fund the current level of $9.5 million.  The board was unanimous in early June for supporting a measure of at least $620.  However, the board was divided on going to either $750 or $960.

The key consideration will be how much the board feels the district needs to fund current programs and potentially fund necessary additional programs, while also facing concerns about the viability of an increased tax measure.

At the June 2 meeting, consultants presented their initial findings for the viability of the parcel tax.

Their key findings were that the Davis community believes “the District is doing a very good job providing a high quality education for local students.”

However, they found, “Initial support for a $960 parcel tax measure for the schools falls well short of the two-thirds threshold needed for passage, unlike in the earlier study that showed strong support for a $620 measure.”

They found that “support among key subgroups such as older voters and high-propensity voters is significantly lower than the overall support level.”

They add, “With the higher dollar amount, however, support is also low among a wider audience including district parents.”

There is also this point, “Since many voters are unaware that they are currently paying a parcel tax, any measure may be risky as it appears to be a significant tax increase. However, given strong support for the schools, a November 2016 measure is feasible if it is reasonably priced.”

At the last meeting, the board directed staff to draw up two resolutions – one at $620 passed 5-0, and one at $760 passed 3-2 – with Boardmembers Barbara Archer and Tom Adams in dissent.  Both resolutions would include an eight-year time frame, as opposed to the four-year time frame that the district had been using.

The resolutions are not currently available on the board meeting agenda packet.

Alan Fernandes was the most vocal at the time pushing for the higher amount, arguing that the parcel tax should include a creation of a budget stabilization account, modeled after the state’s rainy-day fund, which would allow the district to potentially have a fund set aside should the economy go south and the state funding be reduced, to enable the district to avoid funding cuts.

He argued, “It would be very regressive for us to merely renew a parcel tax (at the current level of funding) when we all know we’re going to be worse off in years ahead.” 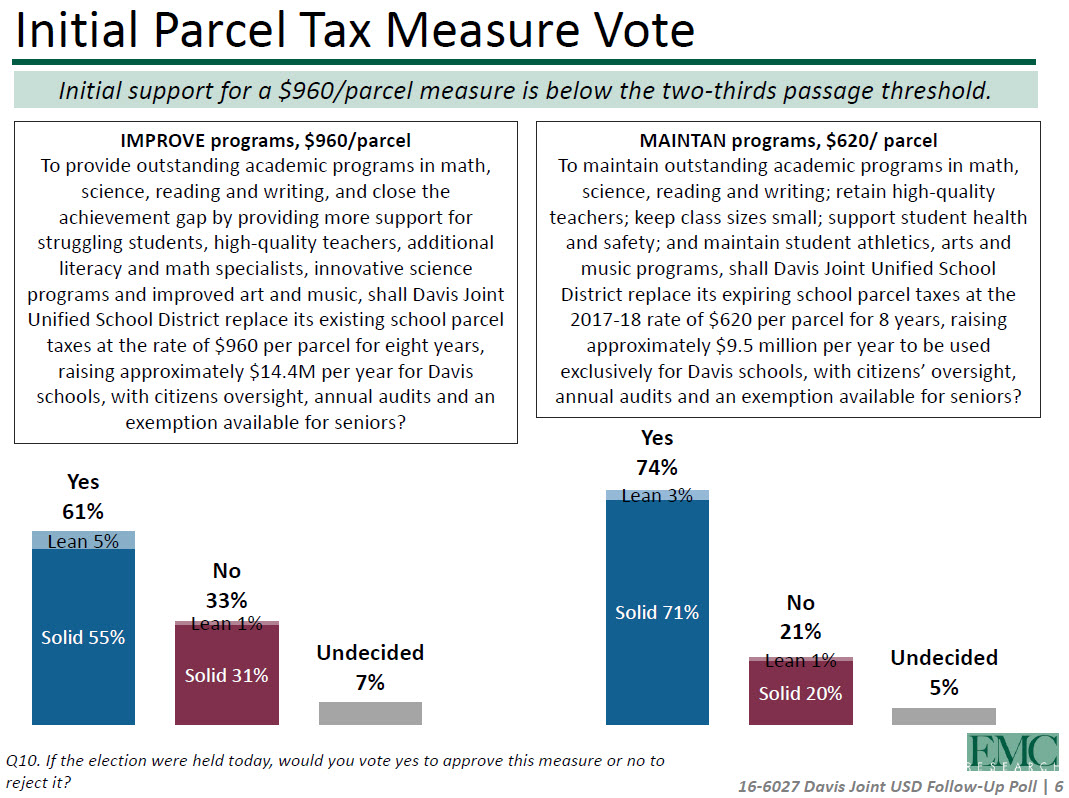 Looking at the numbers, at a $620 level, the Yes side appears to have solid support.  There is 71 percent support, with another 3 percent leaning toward support and with only a 20 percent opposition.  This has been the standard formula for the last five parcel taxes with the two nuances – a longer time frame of eight years and a higher total parcel tax of $620 as opposed to two separate smaller parcel taxes.

Some have expressed concern that the longer time horizon would reduce the stakes by parental groups who will no longer be involved every four years, but rather every eight years, which means that for many parents, they will only go through one parcel tax.

While the $960 parcel tax seems to fail, it does get to 61 percent by adding in leaners.  The Vanguard has argued, therefore, that a full campaign could very well increase support to the level necessary.  A $750 parcel tax is seen as a middle ground and there is more confidence in its viability. 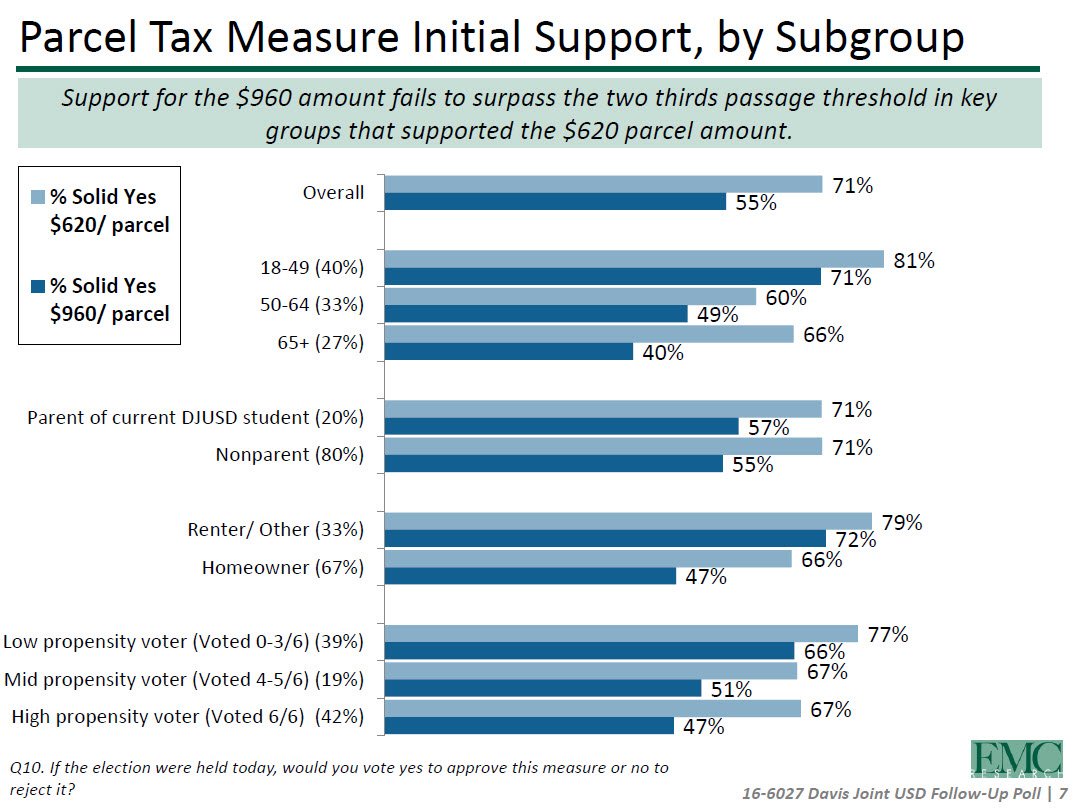 The poll breaks down support at both levels.  The strongest support comes from the 18-49 group, which supports both measures. No other age group breaks the two-thirds level, although those over 65 support, at 66 percent, the lower figure.

Parental status does not seem to make a difference.  Non-parents out-number parents 80 percent to 20 percent (at least in this survey), but both give 71 percent support at the $620 level, while maintaining support in the 55-57 percent level for the $960.

One interesting factor is that homeowners in this survey outnumbered renters by a two to one margin, even though we know in the general population they are roughly equal.  Renters are far more likely to support the parcel tax, 79 percent at $620 and even 72 percent at $960.  Meanwhile, homeowners barely reach the two-thirds threshold at $620, and are at less than 50 percent at the higher figure.

One big question not analyzed here is what the voter population looks like.

On the surface, those numbers look scary even for the $620, but keep in mind that the turnout was 66 percent three weeks ago and may well exceed 80 percent this fall.

Overall, the numbers appear for solid for the $620, while there is clearly work to do to get to $960.

Share:
Tags:Alan FernandesDJUSDMadhavi Sunderparcel taxRainy Day FundSchool BoardSusan Lovenburg
Previous : Monday Morning Thoughts: Is a General Plan Update in the Works During This Next Council Session?
Next : Commentary: Where Is the Justice in Baltimore?

11 thoughts on “Analysis: School Board to Hold Two Special Meetings This Week to Decide the Parcel Tax”