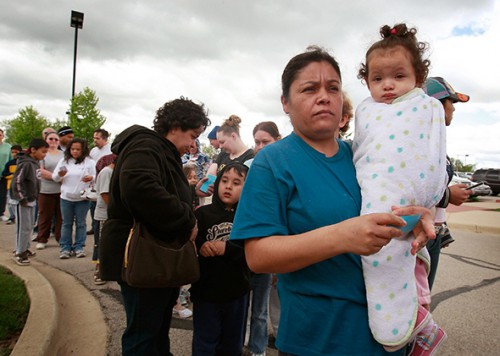 For more than two decades, the MFG rule denied basic assistance to any child born into a family already receiving CalWORKs assistance. By withholding aid, California drove families deeper into poverty and is endangering the well-being of approximately 130,000 of the state’s most vulnerable children. In addition, the rule undermined California’s long-standing commitment to women’s reproductive freedom by punishing women for their reproductive decisions.

“As a single mother who has worked tirelessly to pursue an education and professional career, every bit of assistance my children and I received has made a meaningful difference. It’s meant meeting our basic needs to make it to the next day so that I could continue the climb toward self-sufficiency and empowerment,” said Bethany Renfree, former CalWORKs recipient and policy director of the State Commission on the Status of Women and Girls. “CalWORKs was a critical program that helped stabilize our family on solid ground while I made that tough climb. Yet, having a child subject to the MFG rule also meant that those meaningful dollars were not always enough. Repeal of this unfair rule will have deeply felt implications for all of the families who might have been denied help.”

The MFG rule stemmed from the false and stigmatizing notion, particularly targeted at women of color, that poor women were having babies in order to receive additional assistance for each child, now an estimated $130 per month. Countless academic studies conducted since the rule’s passage have not only unequivocally disproven this premise, but have also shown that this rule exacerbates poverty and the effects of poverty on families. Specifically, children who experience the toxic stress of deep poverty are more likely to experience health and physiological problems than those who do not and may be burdened with cognitive deficits and a reduced ability to cope with challenging situations.

“It wasn’t my plan to be on welfare. It wasn’t my plan to have kids when I did, but then I got pregnant while in an abusive relationship with my fiancé,” said Vivian Thorp, a Bay Area woman who lost her job at Walmart when she became injured. “The MFG rule made it much more difficult to leave welfare and make it on my own. Today, not only have I been able to retain job security at a job where I help people, I have also raised three amazing girls who are happy, healthy, bright and already contributing to society. I couldn’t be more proud of them and of California for finally repealing the MFG rule.”

California has a long history of supporting a woman’s personal reproductive health decisions. However, the MFG rule’s only exceptions are for reported rape, incest, and the failure of certain long-acting contraceptives. By forcing a woman to choose between receiving aid to feed and clothe her family and disclosing personal medical information, the MFG rule violated California’s principles and led to government intrusion into families. Its abolishment ushers in a new era in which women’s dignity and the right to make the best healthcare decisions for themselves and their families will finally be upheld.

Katie Metzger would have been subjected to the MFG rule, but made the difficult decision to leave CalWORKs towards the end of a pregnancy. “Stopping benefits during my last trimester allowed my newborn son to be included in our family grant. It was a very difficult decision to make during the critical last trimester. The last three months of a pregnancy is not a good time to stop receiving much needed assistance,” said Katie, who enrolled in CalWORKs again when her son was born. “No mother should be faced with that decision again. By repealing MFG, we will let CalWORKs keep our families healthy from birth on so that parents can use their energy to rise above.”

Vivian Thorp and Katie Metzger were among several women who traveled to Sacramento last month to deliver over 8,500 petition signatures to Governor Brown urging him to work with the Assembly and Senate to repeal the MFG rule.

While the 2016 Budget Act must still be voted on by the entire Legislature and then signed by the Governor, families are hopeful they can finally declare California free of this oppressive law by the end of June.

More than 130 organizations have written to the legislature in support of the repeal. Efforts to repeal the law have been led by a coalition of organizations dedicated to improving the lives of women, families and children. They include: ACCESS Women’s Health Justice; American Civil Liberties Union of California; California Latinas for Reproductive Justice; Center on Reproductive Rights and Justice, UC Berkeley, School of Law; County Welfare Directors Association of California; California Partnership; and Western Center on Law and Poverty.