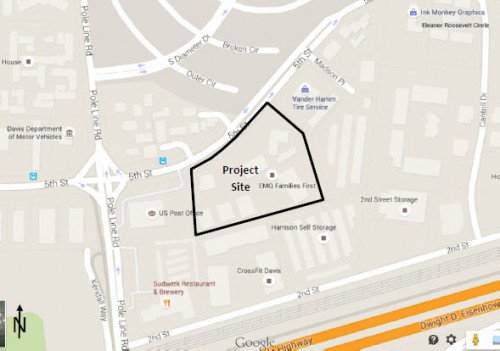 The city of Davis has shifted course on the proposed Sterling Apartment project on 5th Street.  Originally they were looking to go the route of a Mitigated Negative Declaration (MND, or Neg Dec), but shifted gears to do a focused Environmental Impact Report (EIR).

Sterling Apartments is a proposed redevelopment of the former FamiliesFirst site located at 2100 5th Street with a residential apartment proposal. Approximately 5.16 acres of the 6-acre site would be developed as a 4- and 5-story, 203-unit university student-oriented apartment project. The remaining 0.84-acre portion of the site would be developed as a 4-story, 41-unit affordable housing project. There would be a total of 244 apartment units between the two sites.

The 203-unit market-rate apartment site would include 727 beds with a 545 parking space parking garage.

The proposal is controversial with some neighbors, specifically Rancho Yolo residents concerned about issues like parking, traffic impacts, and visual blight.

While the council would not take action on the proposal, they are hoping to provide feedback to city staff and get input from the public regarding potential project alternatives to be evaluated in the EIR.  Once the CEQA (California Environmental Quality Act) review and analysis takes place, formal public hearings on the project application will be scheduled for the planning commission and city council.

Staff notes, “Based on public comments received on the Initial Environmental Study (January 2016) prepared for the project and in order to fully evaluate potential environmental impacts, the City determined that an EIR would be prepared.”

CEQA requires a “no project” alternative. This No Project Alternative assumes the existing buildings, facilities and zoning are maintained and that a use and intensity similar to the former occupant, EMQ/Families First, occupies the site. The use would be a low-intensity residential treatment facility or similar non-profit institution or group of institutions with no new construction and no significant housing. The No Project Alternative establishes the existing baseline conditions.

This Existing Zoning Alternative is similar to the No Project Alternative, but assumes the site is redeveloped under the current zoning at a more intense level. It would include demolition of some, if not all, of the existing facilities and buildings for the new user. The existing PD 3-92 zoning allows hospitals, churches, and public/quasi-public uses by right. Office uses are conditionally allowed. Specific development standards such as building setbacks, height, open space, lot coverage would be established as part of the specific development proposal. The existing General Plan designation for the site, Industrial, establishes a maximum floor area ratio of 0.50 for the site, which equates to 130,680 square feet for the 6-acre site.

This alternative eliminates the potential impacts related to housing or residential uses. However, a more intensive non-residential development could result in other use land use conflicts given the mix of uses in the area as well as similar or increased peak hour traffic trips due to work commuting.

This Conventional Apartment Alternative assumes that the site is redeveloped at a residential intensity similar to the proposed project, but with conventional apartments instead of the proposed project which is oriented to university students and designed to be leased by the bedroom. This Conventional Apartment Alternative assumes a mix of 2-, 3-, and 4-bedroom units and a conventional apartment design to better accommodate families and traditional households. Assumed occupants per bedroom would be based on other multi-family housing in Davis.

This alternative would reduce the potential impacts associated with student housing and the potential conflict between different demographic groups. Overall impacts related to a high density residential land use, aesthetics, GHG emissions, would be similar. Traffic impacts would potentially be worse due to conventional traffic characteristics of this alternative and greater population. Project density would be slightly greater at 45 units/acre.

This Reduced Density Alternative would maintain the project as student-oriented apartments, but with a reduced number of units, 150 market-rate units. An additional 39 affordable apartment units would be provided, but the affordable units would be integrated with the market-rate units instead of provided as a separate building and site. A total of 189 units would be allowed based on the maximum allowed density bonus. Overall development intensity would be less. Buildings would be 3- to 4-stories tall. Parking would match City standards and a majority of the parking, if not all of the spaces, would be surface parking.

This alternative would have reduced impacts for aesthetics, traffic, noise, land use, GHG emissions. Integration of the market-rate student units and affordable units could lead to greater conflicts. Fewer housing units would be provided.

This Aggressive Transportation and Parking Demand Management Alternative would maintain a similar number of units, layout and building design as the proposed project. It assumes no changes to the Affordable Housing component of the project with same units, parking, and other requirements as proposed. For the Student Market-Rate component, it assumes the same number of units and same residential building footprint with the following restrictions or requirements to aggressively discourage car use and vehicle trips by residents.

Measures to reduce car use would include a maximum of 50 pay/hour visitor parking spaces; no more than 50 resident permit parking spaces, owner-managed (or contracted) car-sharing services on-site, which requires use of only electric vehicles, and number of vehicles to be determined based on market demand. It assumes a one-story (two usable parking levels) parking structure to accommodate the above-referenced parking, permit parking, and car-share parking. Additional developer incentives and facilities to promote bicycle and transit use would be provided.

This alternative would have reduced impacts to traffic, air quality, and GHG emissions. It could result in increased impacts on local transit and bicycle facilities, as well as neighborhood parking impacts.

This Off-Site City Alternative assumes a similar residential apartment development as currently proposed can be developed on a similarly-sized parcel elsewhere within the City. No multifamily zoned parcels of similar size are currently available within the City for development. For the purposes of evaluating an off-site alternative location in the City, staff has identified a 7.4-acre property at 3820 Chiles Road. The property contains an existing office building and parking area. Surrounding uses include commercial properties, multi-family and single-family areas. The site faces Interstate 80 directly to the north.

The site is zoned Commercial Mixed Use (CMU) and does not currently allow residential uses. Development of the site would require similar land use entitlements including a rezone for the multi-family residential use and site plan and architectural review. Existing facilities would be demolished. This alternative assumes a similar Affordable Housing component would be provided on a separate affordable parcel. It also assumes a similar residential density, building height and size, unit type, and parking as the proposed project. At a proposed 40 units/acre, the site could accommodate a total of 297 units, consisting of 220 market-rate units and 77 affordable units.

This alternative would provide a slightly greater number of housing units for the City because of the larger site. It would have similar or greater project impacts on the range of issue areas including traffic, air quality, GHGs, land use, aesthetics, noise, public services, and recreation. The location of the site is about twice the distance from the UC Davis campus, approximately 2 miles, compared to the proposed project site and is less convenient to the City’s bicycle network. It would be expected to have a higher rate of vehicle trips. Proximity of this alternative site to Interstate 80 would have potential greater air quality and noise impacts on residents of the development, depending on the specific site characteristics.

This Off-Site UC Davis Alternative assumes a similarly-sized student housing development as currently proposed would be located on the UC Davis campus in the West Village area. As a UC Davis site, the Affordable Housing component would be eliminated.

This alternative provides a similar number of student housing units, but does not include the affordable units. This location would reduce traffic and related impacts on City neighborhoods from student travel to and from campus. It would reduce potential land use conflicts and impacts. It would marginally add to impacts in City neighborhoods along the periphery of the campus from increased student activity and travel. It should be noted that the City does not have land use control over the UC Davis campus and that development of the West Village area for residential purposes is part of the UC Davis Long Range Development Plan.

The city has already performed a traffic impact analysis, on October 8, 2015.  “It analyzed area intersections and road segments and addressed cumulative impacts,” staff writes, noting that based on comments and review, there will be an updated traffic analysis prepared.

23 thoughts on “Council to Consider EIR Project Alternatives for Sterling”