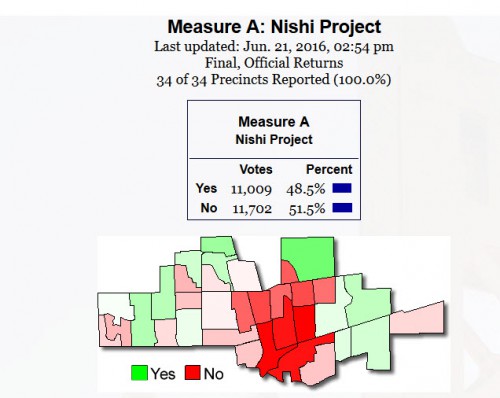 The final count is in.  The Yolo Elections Office has finished counting ballots and Nishi, the only election with a chance for the results to flip remained defeated with margin widening to 693 votes.  The final vote total took the number of No Votes to 11,702 with yes getting 11,009 – meaning the turnout increased to 66%.

In the State Assembly, Dan Wolk increased his Yolo County lead by about 400 votes over Cecilia Aguiar-Curry but not enough to change the outcome district-wide.

We expected, after two resounding defeats of a Measure J/R project, in 2005 and 2009, that this time it would be different.  As it turns out, it was.  The first returns showed Measure A, the Nishi Gateway Project that would put about 1500 beds into an apartment and condo development along with 325,000 square feet of R&D space and small retail into a project adjacent to UC Davis, was ahead by about 300 votes.

The No side outstripped the Yes side by about 600 votes on election day, finally forging ahead around 2:30 a.m. as all the precincts were counted.  While there are still absentee ballots to be counted, neither side expects them to change the outcome.

Alan Pryor, a spokesperson for the No on Measure A side, told the Vanguard, “We are optimistic that the final tally will remain in favor of the No vote once all the remaining ballots are counted.”

He added, “We are anxious to continue the discussion with the community and UCD as to how to best provide the affordable housing the City and University needs.”

Daniel Parrella was magnanimous in the face of narrow defeat. “Hats off to the No team for making up in passion what they lacked in money and resources. They never gave up and it is admirable of them,” he said.

On the one hand, the opposition noted the huge resource advantage that the Yes side had, outspending them around $500,000 to $20,000.

In a way, the map ended up looking like a classic Davis voter map, with the inner core voting no and the new subdivisions on the periphery voting yes.

Mr. Parrella felt like the race was lost when Bernie Sanders came to town and Redrum Burger protested.  In the last week, the No on A side came out with a strong push on Facebook, going from 100 likes to over 500 in just a few days.  A glance at the map shows that many of the student precincts ended up going to the No side.

In our view, what is notable is the relatively low turnout in the city.  Given that Bernie Sanders came to town last week and the election was hard fought until the end, the turnout, pending the counting of the final absentees, was only 43.5 percent, barely above what it was in 2014 when there was no presidential primary.

It is hard to know what factor the presidential election played.  In the city of Davis, the town went narrowly for Bernie Sanders, 6542 to 6317.  Countywide, Hillary Clinton would win handily.  Had the race not been called on Monday, perhaps the Sanders margin would be higher.  It is not completely clear what effect, if any, the Sanders factor had, other than it appears to have been suppressed by the race being called.

The defeat of Measure A leaves open a lot of questions for another day.  One of those questions will be whether any Measure R project can win at the polls.  This one was at least competitive and, while the opposition argued it was a bad project with bad law, given the location and nature, there will be those who wonder if any vote can pass.

Then there is a question about economic development and whether the city will now be forced to go to a parcel tax to attempt to fund roads and infrastructure.