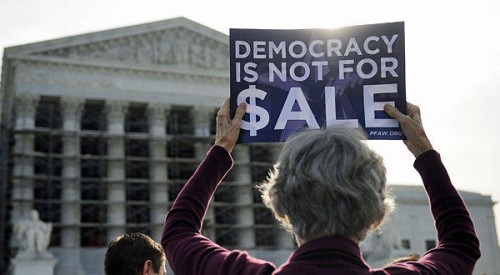 As independent expenditures (IEs) in the AD 4 race push $3 million, one candidate has called for spending limits.  Sounds great – but, as we discussed, the Supreme Court in Citizens United ruled that limits on IEs are unconstitutional.

On the other hand, Citizens United upheld public disclosure of campaign spending as essential to elections:

“…disclosure permits citizens and shareholders to react to the speech of corporate entities in a proper way. This transparency enables the electorate to make informed decisions and give proper weight to different speakers and messages.”

In the perfect world of Supreme Court opinions, voters would have easy access to data on IEs.  In the real world, California has made progress towards this goal, but several issues remain.

First, Citizens United launched a surge in IEs by 501(c)(4) social welfare and other nonprofit corporations that are not registered as political committees, because they are not primarily political organizations .

This spending is known as “dark money,” because, in past elections, these corporations have not been required to disclose their donors.  (For a “fun” example, Stephen Colbert demonstrated how easy it was to create a federal Super PAC and a 501(c)(4) to anonymously fund the Super PAC on his show in 2011.)

Second, PACs and nonprofits often pass money among themselves, creating a layered money maze.  For example, one has to dig down several layers on the Secretary of State Cal-Access campaign finance website to determine all of the funding sources of EdVoice IEs in the AD4 race.

Finally, CalAccess, has limited functionality.  Reporting is done using paper forms, which apparently requires manual input into CalAccess.  To his credit, Secretary of State Alex Padilla has led efforts to improve searches on the system, but a seamless web-based system for reporting and public access is needed.

A huge multi-layered dark money infusion into the 2012 election brought attention to weaknesses in the state’s disclosure rules.  Americans for Responsible Leadership (ARL), an Arizona 501(c)(4),  made a last minute $11 million contribution to the Small Business Action Committee PAC (SBAC), which in turn ran ads for Prop 32 and against Prop 30.

The state sued to audit ARL for failing to disclose its contributors.  One day before the election, ARL finally disclosed that its contributors were two other 501(c)(4)s.  Eventually, the money was traced to a fourth 501(c)(4) in Virginia.  The actual source of the funds remains unknown, however, because the law at that time did not require disclosure below the first layer.

California passed campaign disclosure reform in 2014 in response to the ARL case. The new rules require any organization  that receives contributions (over a certain minimum) for the purpose of political activity in California to disclose the source of those contributions.

The rules are intended to uncover multi-layered contributions between out-of-state corporations, federal Super PACs, unincorporated associations, and individuals that are intended for political activity in California races.

If the new rules had been around in 2012, SBAC would have had to trace the mystery contributors to the donors to the Virginia non-profit.

The new rules also require certain state-registered political committees that raise in excess of $1 million to disclose their top 10 contributors.  The committee must identify the actual individuals or corporations that are the true sources of the contributions, and the Secretary of State will publish the top 10 on its website.

Donors to 501(c) organizations who want to remain anonymous can no longer hide contributions intended for political activity in California.  It remains to be seen if California’s disclosure rules actually result in a fully informed electorate in state and local races.

One thought on “Full Disclosure of Campaign Spending – An Antidote to Super PACs and Dark Money?”