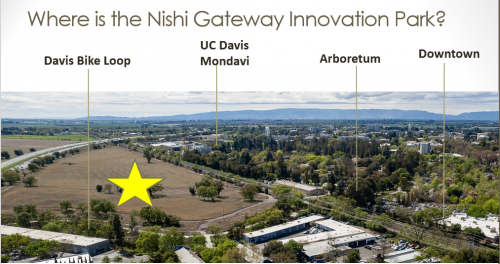 I think most Davis residents, in our hearts, want to see everyone in our community with a roof overhead. We know our city and our state are facing a housing shortage that is unprecedented. Davis today has 0.2% vacancy rate in rental units, making our housing market one of the most constricted in the nation.

This drives up rents, and compels many Davis students and workers to commute from other cities, often through Richards Boulevard. This is the backdrop for which we consider the fate of Measure A, a ballot initiative to approve the Nishi Gateway innovation park that will appear this Tuesday. If voters approve Measure A, Nishi will construct 650 units, including 210 compact condominiums and 440 units for students.

The 1,500 beds for students at Nishi are sufficient to prepare our city for 35% of the influx of new students expected by 2020. Of all units at Nishi, 239 will be under 850 square feet and most will be under 1,110 square feet. These are modern buildings, with state of the art energy efficient climate control and easy access for seniors and the disabled, providing an in demand niche of housing that is almost completely unavailable in Davis.

Situated directly between the campus and downtown, with miles of walk and bike paths built into and surrounding Nishi, Measure A is designed to make car-free living a preferred way of life. Monthly fees to store cars and caps on car travel during peak hours contribute to this goal.  With a Unitrans stop on site and an Amtrak station practically within eyesight, Nishi encourages public transit. With the campus, Arboretum, and a vibrant downtown as next door neighbors, Nishi is positioned to attract people who love both the City of Davis and the University of California at Davis.

In addition to housing, Measure A authorizes construction of 325,000 square feet of research and development space, which our city desperately needs to retain small businesses that emerge from technological discoveries on campus.

All units at Nishi are dense infill with stacked flat condominiums and vertical mixed-use, providing our city with housing otherwise unavailable to us. City Council unanimously approved  an affordable housing waiver for projects similar to Nishi. To further fulfill city housing needs, in the final binding agreement, the city and developers agreed that Nishi would privately contribute $1 million to the city’s affordable housing fund. This is on top of more than $23 million going to infrastructure projects mostly geared toward improving traffic and almost $2 million annually going to support city services and Davis Joint Unified School District. If voters approve Measure A, $9 million in fees will immediately be provided to the city before a single shovel breaks ground.

Nishi provides types of housing our city doesn’t have, and it frees up housing in family neighborhoods. Housing for students at Nishi is at a price point comparable to existing dorms, and with the affordable housing funded by Nishi, future housing will be created where it’s needed most.

We are blessed to live in a city that includes a walkable downtown with ample restaurants, shops, cafes, and nightlife. Our city has a fair number of employment opportunities, and with one of the world’s greatest research universities at our doorstep, opportunities for additional employment are ours for the taking with smart public policy. Measure A creates between 1,500 to 1,800 new permanent local jobs, helping even more existing Davis residents to live here.

For all these reasons, voters concerned about widening gaps in access to housing should vote Yes on Measure A.

Charlie Persson is a ten year Davis resident with a background in renewable energy, green building and  energy efficiency. Currently self employed and at UC Davis Craft Center.