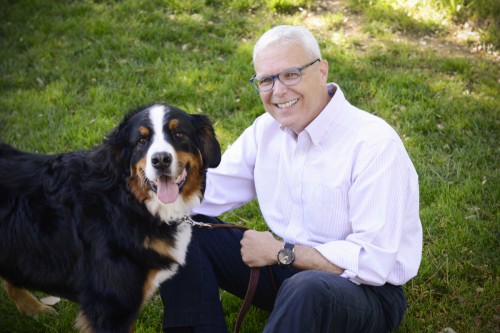 Bob Poppenga, candidate for Davis School Board in this November’s election, welcomes you to meet him and his supporters at his booth this Fourth of July at Community Park starting at 4 p.m.  Come learn about his campaign, his ideas for Davis schools, and bring any questions you have.  Children are encouraged to join, too, and there will be a fun animal-themed stamp activity for all ages, young and young at heart.
Bob is faculty veterinarian and animal and food safety scientist at UC Davis, who received his Doctor of Veterinary Medicine and PhD degrees from the University of Illinois. He has held faculty positions at the nation’s top veterinarian schools, and moved with his wife to Davis in 2004. Their two daughters, ages 13 and 16, attend Davis public schools.
Poppenga endorsements include California State Senator Lois Wolk, former California State Assembly member Mariko Yamada, Davis Mayor Dan Wolk, Davis Mayor Pro Tempore Robb Davis, former Davis Mayor Joe Krovoza, Davis City Council Member Elect Will Arnold,  current Yolo County Supervisor Jim Provenza, Davis School Board Trustee and Senior Associate Dean for Academic Affairs and Martin Luther King, Jr. Professor of Law Madhavi Sunder, former Davis School Board Trustee Gina Daleidin, former Davis School Board Trustee BJ Kline, and former Davis School Board Trustee Joan Sallee.
For a complete list of endorsements and more information about Poppenga’s campaign, please go to Bob4Schools.org and his Facebook page. Bob can be reached at rhpoppenga@gmail.com.
Share:
Tags:Bob PoppengaDJUSDElection 2016School Board
Previous : Stab Victim from Neo-Nazi Rally Remains Unidentified
Next : Shades of Grey in a Black and White World View