The good news for the city is that the immediate budget picture has improved to the point where the council has decided to use one-time monies, basically its fund balance, to address some of the city’s capital needs.

The council, back in May, made the decision to add to the budget $8.6 million in one-time general fund expenditures to address funding for Building & Parks Asset Management Plan expenditures, Public Works Facility Assessment, and Citywide Functional space needs assessment.  Those changes are reflected in the chart below: 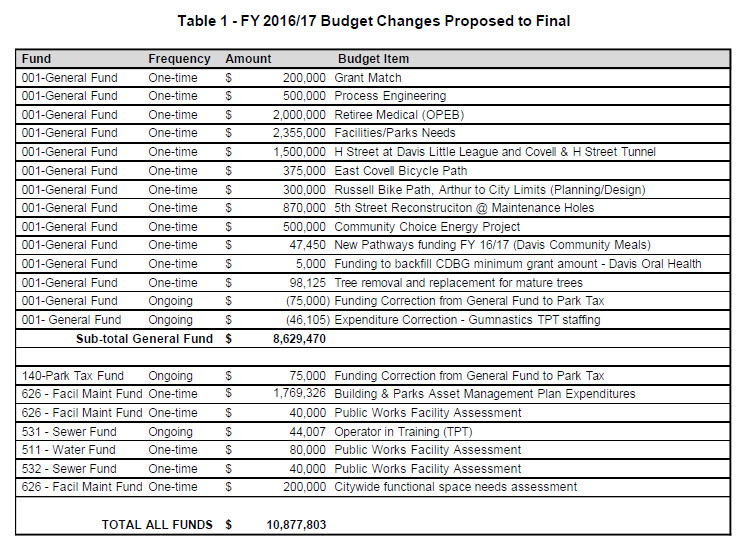 The staff report notes that the city has “worked with a new Fiscal Diagnostic tool developed by Michael Coleman to take a look at the City’s fiscal outlook from another perspective. This California Municipal Financial Health Diagnostic is primarily concerned with the ability of the local government to meet its financial commitments now and into the future (cash, budgetary, and long-run solvency).”

Of concern was indicator #1, which was the only one in the red: “This indicator is looking at the City’s net true operating deficit/surplus as a percent of revenues. This would include adjustments for annual funding shortfalls for Road, Facility and Park maintenance. Since Retiree Medical and Pension liabilities are being met on an annual funding basis, they were already included in the base operating numbers.

“When comparing FY 2013-14, which had very little activity toward our annual unfunded Roadway liability of over $9 million, it shows a much more significant shortfall than you would see in future years, in which expenses to enhance road maintenance were made. In addition, FY 2017-18 is impacted when adding the $5.0 million needed in facility maintenance compared to our annual current funding. All in all, this area of unfunded liabilities is one the City is aware of and had been making efforts to address.”

While not a surprising finding, this is the one that is driving most of the concern.

While good news, the city is not in a position to make meaningful contributions that would dramatically decrease category #1 concerns.

The other three areas of concern include indicator #3: “Capital Asset condition is the focus of this indicator. The annual recording of Capital assets in the City’s government wide Financial Statement provides beginning and ending net values of City Assets. This is not a General Fund only exercise, it is reflecting all city assets, which have been showing improvement over time with the commitment of funds to aid in the repair and maintenance of our assets. While the change in valuation has been improving, we still have a long way to go in improving our capital asset condition, therefore caution to continue making forward strides is noted.”

Indicator #5 is also of concern: “Increasing fixed costs may indicate an unsustainable financial structure where the government has limited ability to make necessary budget changes. Fixed does not mean static, they may be changing over time but cannot be easily altered. Labor costs are an example of these types of expenditures. The Davis diagnostic indicates a trend that is currently making efforts to flatten costs over time, but still has open contract negotiations to be mindful of that can make this area one that can change quickly if not managed carefully.”

And also of concern is indicator #14: “Are public service levels below standards in this community in Fiscal Years 2013/14 to 2015/16? Yes, especially looking at underfunding for the City’s Transportation infrastructure, Facility Maintenance and Park Maintenance. These areas alone are planned for improvement, but still have much to be accomplished.

“The City has been working hard for several years to be more mindful and making strides to address outstanding liabilities in Transportation infrastructure, Facility Maintenance and Park Maintenance, as well as being diligent in holding a reasonable line on fixed costs for labor, benefits and contracts to protect the City’s assets. This diagnostic report has affirmed we are paying attention to the right areas of concern and making forward progress to mitigate them.”

While none of these findings are particularly surprising, in a way they understate the nature of the challenges the city faces.  We are in relatively good economic times, our general fund balance is healthy and for the most part the city has been fiscally prudent, even if we might question the decision to slightly increase compensation to a host of bargaining units.

However, the bigger picture shows a huge challenge in terms of unmet needs and unfunded liabilities.  The council has carved out some of the ongoing needs for roads, but we are only about halfway there on roads.  We have done little on transportation infrastructure, facility maintenance and park maintenance.

Our concern has been that the level of service provided to the community will decrease over time without identifying new revenue sources – whether they be a new tax or economic development.

The scary part here is that, right now, we are just getting by during relatively good economic times – what happens the next time we have a major economic downturn?