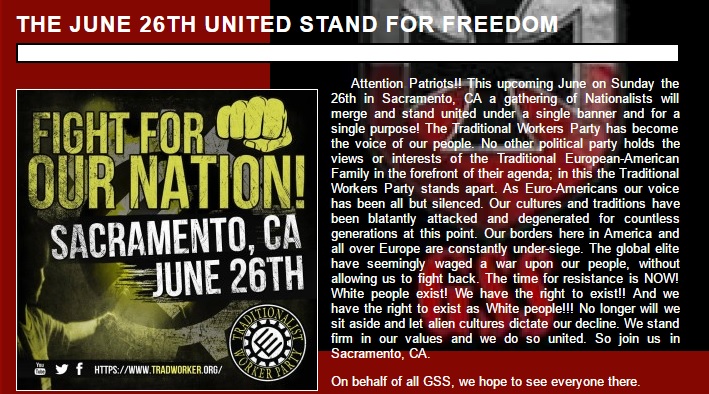 Various neo-Nazi groups are scheduled to meet at the state capitol on June 26 as an official event of their “White Lives Matter” campaign, a white supremacy gathering that claims to spread awareness about “white genocide.” The event has been instrumented by the Traditional Workers Party (TWP), an Aryan nationalist organization led by Mathew Heimbach. Heimbach made national headlines after violently attacking an African American protester at a Donald Trump rally, and also petitioned for the creation of a White Student Union at the Towson University Campus.

He has been directly linked to the Aryan Terror Brigade, the American Freedom Party, and the League of the South. TWP will stand with other local domestic terrorist groups, including The Sacto Skins, Golden State Skinheads, National Socialist Movement, California Skinheads (CAS), Blood & Honor and the Ku Klux Klan.

Anti-fascist activists are already planning their opposition, as they organize a counter protest. Similar to previous years, a police presence will be put in place to “protect freedom of speech” and minimize physical contact between both sides. Many have blamed Donald Trump for the documented rise in white supremacy organizations and domestic terrorist membership after he was officially endorsed by the Grand Wizard of the KKK. In fact, the Southern Poverty Research Center confirmed that the number of hate and anti-government ‘Patriot’ groups grew last year, while domestic terrorist attacks and radical plots have increased as well.

Unfortunately, white supremacy groups are no strangers to the Sacramento area. In fact, there are currently eight documented active hate groups in Sacramento; 84 in the entire state. The racially charged fliers found on parked cars in Sacramento in May which called for a “renewed commitment to white power” was yet another sign of the times – what many fear is growing Aryan radicalism amidst larger national conversations on the Black Lives Matter campaign.

One Citrus Heights-based group, American Front, has regained its numbers after fascist leader David Lynch was shot and killed in March 2011. Lynch was also the head of the Sacto Skins, one of the oldest skinhead gangs in the country who are expected to be in attendance at the June 26 rally. Other hate groups speculated to stand with TWP are Life Rune Industries, a North Highlands group that produces white-supremacist music, and The National Alliance, a white supremacist, anti-Semitic organization that is active in Sacramento.

The Anti-Fascist Action Sacramento group has already released a statement which calls for collective community efforts to unmask the local Klan members living among us and reclaim the streets as a hate free zone.

“Anti-Fascist Action Sacramento does not believe in allowing hate to have a platform and we are calling upon the community to shut down their rally. Fighting fascism is a moral duty, not a political one. We believe most people are good and are willing to stand up against racial hatred. Our objective is to force the nazis off our streets and to send a strong message that they are not welcome in society and especially Sacramento.”

57 thoughts on “Neo-Nazis to Rally at State Capitol”