(Press Release by the Sentencing Project)—

African Americans are incarcerated in state prisons across the country at more than five times the rate of whites, and at least ten times the rate in five states, a new study on race and incarceration revealed today.

Although African Americans are not a majority in any of the 50 states, they make up more than half of the prison population in a dozen states: Alabama, Delaware, Georgia, Illinois, Louisiana, Maryland, Michigan, Mississippi, New Jersey, North Carolina, South Carolina and Virginia, according to The Sentencing Project’s report, The Color of Justice: Racial and Ethnic Disparity in State Prisons.

New Jersey tops the nation in terms of disparity in its incarceration rates, with a black/white ratio of more than 12 to 1. Wisconsin, Iowa, Minnesota, and Vermont follow closely behind, 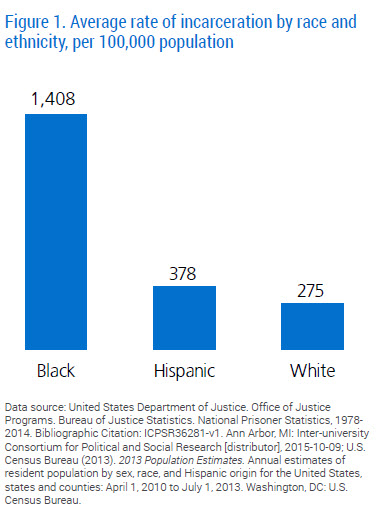 The report also examines prison populations by race and age. It finds that in 11 states, at least 1 in 20 adult black men is incarcerated.  In Oklahoma, the state with the highest black incarceration rate, 1 in 15 black men 18 or older is in prison.

Hispanics are incarcerated nationally in state facilities at a rate that is 1.4 times the rate for non-Hispanic whites, but at a much higher rate in Massachusetts (4.3), Connecticut (3.9), Pennsylvania (3.3), and New York (3.1). In raw numbers, Hispanic incarceration is highest in border and southwestern states.

Prison population growth has slowed and inmate populations are down in some states, but the United States remains the world leader among developed nations in its rate of incarceration. Some states and the U.S. Congress are engaged in efforts to reduce prison populations by reducing sentences, reclassifying some drug offenses as health rather than criminal matters, and pursuing other “smart on crime” approaches to public safety.

“Public safety is a concern for all, but there should be a growing discomfort with the skewed system of mass incarceration. It has produced diminishing returns for public safety while locking up record numbers of people of color,” said Ashley Nellis, Senior Research Analyst and author of the report. “Any reform effort to scale back mass incarceration must also address these staggering racial and ethnic disparities.”

The report identifies three contributors to racial and ethnic disparities in imprisonment: criminal justice policies and practices, implicit bias, and structural disadvantages. Combined or separately, these pervade the criminal justice system and undermine support for law enforcement in neighborhoods where it often is most needed, tarnishing the credibility of the legal system across the country.

“As we seek ways to make the criminal justice system more fair and efficient, policymakers should adopt strategies that reduce both excessive incarceration and racial/ethnic disparities. Unless these goals are linked we risk seeing the continuation of racial disparities even though prison populations may decline,” stated Marc Mauer, Executive Director of The Sentencing Project.

The Sentencing Project is a non-profit and non-partisan organization based in Washington, D.C., that works for a fair and effective U.S. justice system by promoting reforms in sentencing policy, addressing unjust racial disparities and practices, and advocating for alternatives to incarceration