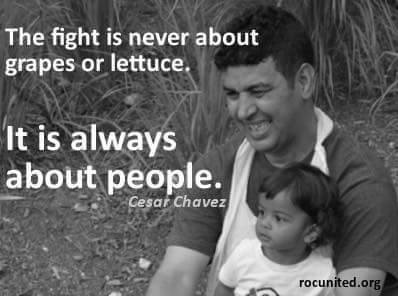 A few months ago, a special session of the California state legislature was called for March 31, 2016 for two very special reasons. One, to pass a historic piece of legislation, a 15 dollar minimum wage, (the first such law for a state in the entire country) and two, to honor legendary United Farm Workers organizer and civil rights icon Cesar Chavez. When that day came, legislators fell over themselves with praise for Cesar Chavez. The adulation of Chavez was bi partisan. Legislators from both parties took turns speaking eloquently to the audience and members just what an amazing man he was, and how much the farm worker movement meant to them. Then they took a vote on a resolution honoring him and the farmworker movement. There was no opposition to the resolution. Then the legislature proceeded to pass a 15$ minimum wage, on Cesar Chavez day. As important as the 15$ minimum wage victory is to working people and the labor movement, the legislature seemingly came down with a severe case of amnesia a few months later when the time came to actually stand up for the farm worker movement.

On June 2, hundreds of farm workers came to Sacramento from all over the state to hopefully witness the passage of another historic bill. Assembly bill 2757 would have extended overtime protections to farm workers. They were sorely disappointed when right in front of them, the bill died on the assembly floor with a vote of 38 in favor and 35 opposed and 7 abstaining or absent. I am writing this piece because I am incensed with the assembly members who voted no on this bill. They all voted to honor Cesar Chavez and the movement of farm workers that he led. When it came time to really protect and honor farm workers as full citizens of this state, those assembly members chose to forget their fawning praise for the farm worker movement in a spontaneous collective fit of amnesia. All sarcasm aside, our very own assembly member, Bill Dodd, voted against this law and farm workers. As did Sacramento area democrats Jim Cooper of Elk Grove and Ken Cooley of Rancho Cordova.

Truckers, office workers and grocery clerks are all covered by overtime protections under California law. As far as I know, farm workers are the only classification of workers that I am aware of that are specifically exempted from overtime protections. This exemption from overtime exemptions is a racist relic that, somehow, we as Californians have allowed to continue for far too long. There is something morally abhorrent about legislators voting to deny these basic human rights to farm workers. Legislators sit in comfortable chairs, in air conditioning, and are paid well for their time. Conversely, farm workers do back breaking, labor intensive work, outside, in the 100 degree heat, for minimum wage, ten hours a day, six days a week! That of course assumes the growers are actually complying with the existing labor laws and not stealing wages for hours worked. It’s a classic example of institutional racism, and the legislature just voted to uphold that racist status quo.

Before I get bombarded in the comments section about the definition of institutional racism, just ask yourself this question. “What kind of a person is a farm worker?” Farm workers are almost universally people of color, many are undocumented, and unfortunately many are minors. Therefore, an exemption in labor law protections that do not extend to a class of workers that are nearly universally people of color and immigrants is institutional racism. The same thing could be said about domestic workers in the new deal programs. One does not see many white faces picking crops in California today. Meanwhile, presumptive Republican presidential nominee Donald Trump and his supporters think these farmworkers are somehow destroying America by coming here and doing difficult work that no one else will do.

So what do our various candidates for the state legislature think? We obviously know what Bill Dodd thinks, as he voted against farm workers. Bill Dodd’s primary opponent, former assembly district 4 representative Mariko Yamada has recently made many public statements of support on social media for the farm workers, and has expressed disappointment that the bill did not advance. She wrote “I am on the record 5 years ago supporting AB 1313 (Allen) during the 2011-2012 legislative session for farmworker overtime. Regrettably, AB 1313 also did not pass. Farmworkers and domestic workers were excluded from overtime protections in the 1935 NLRA. (national labor relations act) Its long past time these racist injustices are eliminated!” County Supervisor and candidate for Assembly district 4 Don Saylor also came out strongly for this bill on social media writing, “Let me be clear. My vote on AB 2757 would be YES. Why should farm workers not be paid for overtime under the same rules as any other worker?” Winters mayor and assembly district 4 candidate Cecilia Aguiar-Curry provided the following position statement when asked:

“Its important that people understand the Ag sector. Farming demands unique requirements. I have concerns about redefining the current overtime provisions in the labor code on the heels of the new 15$ minimum wage requirement which phases in by 2020. I think it is prudent to take a go slow approach in order to assess the financial impacts on farmers and consumers before adding additional costs to production agriculture. I am open to changing the overtime rules in the future AFTER the effects of increased labor costs due to the new minimum wage are better understood.”

Dan Wolk and Gabe Griess did not immediately respond to my inquiries about this bill.

I am hopeful that one day as Californians, we will end this injustice. The next time you sit down for a nice meal, please consider the difficulties faced by the people who help get those fruits and vegetables to your plate. Somewhere, not too long ago, a farmworker picked that strawberry, or broccoli head in the sweltering, 100 degree heat. That farm worker is a person, deserving of all the same rights as any other worker. Overtime rules are meant to protect the dignity of life for working people. Why should the people who toil in the heat not be given the same dignity as the people who work in your office? Or your store? In your classroom or anywhere else? It’s a question of basic human rights. Like the civil rights leader Cesar Chavez said, “The fight is never about grapes or lettuce. It’s about people.” Please remember that when casting your votes on Tuesday.

Share:
Tags:AB 2757Bill DoddFarm WorkersMariko Yamada
Previous : Guest Commentary: Near Unanimity Is Hard To Achieve, but It Exists with Measure A
Next : Monday Morning Thoughts: Reading the Tea Leaves for Tuesday