Three weeks ago there were four votes to go forward with a quarter to one-half cent sales tax that would, among other things, generate between $8.4 million (quarter-cent) to $16.8 million (half cent) for several items  “including, but not limited to, local road maintenance, improving access to and the quality of preschool and early childhood education, and services to reduce homelessness.”

Because the measure would be a general tax, it requires four votes of the County Board of Supervisors.

There were questions about how the preschool program would work, particularly since it lacks the resources to serve all 6000 or so students, who currently either cannot or do not access existing preschool programs.

According to the county staff report:

Funding from the City of West Sacramento, First 5 CA, First 5 Yolo, and other contributors built a model program that, at full funding, included all three key components: quality support or enhancement, accessibility, and affordability.  This pilot has generated impressive outcomes and valuable lessons learned. The most recent evaluation report, released January 2016, shows that children who attended an Up4WS preschool program (most who would be considered high-risk) were more ready for kindergarten compared to a similar group of children who attended another preschool.

First 5 IMPACT (Improve and Maximize Programs So All Children Thrive) is a quality improvement program for early childhood providers countywide. It is funded by First 5 CA and First 5 Yolo, and implemented by City of West Sacramento staff, already trained from their experiences with Up4WS. This year, 2016, is the first year of implementation, as First 5 CA shifts from funding a handful of pilot programs that included Up4WS, to quality improvement in all 58 counties.  The final action plan has been approved by First 5 CA and associated partner agencies in Yolo County. It is underfunded for the robust quality support modeled by Up4WS and cannot reach as many providers, and therefore children, as could benefit with additional funding. The program plan, however, includes many of the proven pieces of successful quality improvement, and IMPACT has established a beginning network of quality early childhood providers.  IMPACT is only the quality component, and does not currently address expanded access or affordability.

Staff argues, “By both scaling up the successful, 10-year UP For West Sacramento (Up4WS) pilot and expanding and enhancing the current First 5 IMPACT quality improvement program, the Yolo County Quality Preschool/Early Childhood Education Initiative will build on existing programs, both public and private, center-based and family settings, to create a network of improved quality programming, expanded capacity, and affordability in areas across the County.”

Staff writes, “Following the Up4WS pilot program, the Yolo County Preschool Initiative seeks to  improve quality and access across the County of Yolo, in every jurisdiction, as well as expanding and upgrading preschool and early learning among high-need and/or at-risk populations.”

They note, “Both 3 and 4-year-olds are targeted to be served in the selection of sites involved in expanding access and in the creation of a central eligibility list for scholarship funding for high-need children.”

This would support both half-day and full-day programs, using a sliding-scale to provide both scholarships and provide reimbursement for children on the eligibility list.  “Up4WS charges fees to some parents at varying levels. Following this model, sliding scale tuition reimbursement would be allocated to participating sites, both private and public.”

The current proposal seeks to fund at about 25 percent of sales tax dollars for preschool.  They estimate that 2400 children in existing early learning sites can be served per $1.6 million dollars invested. 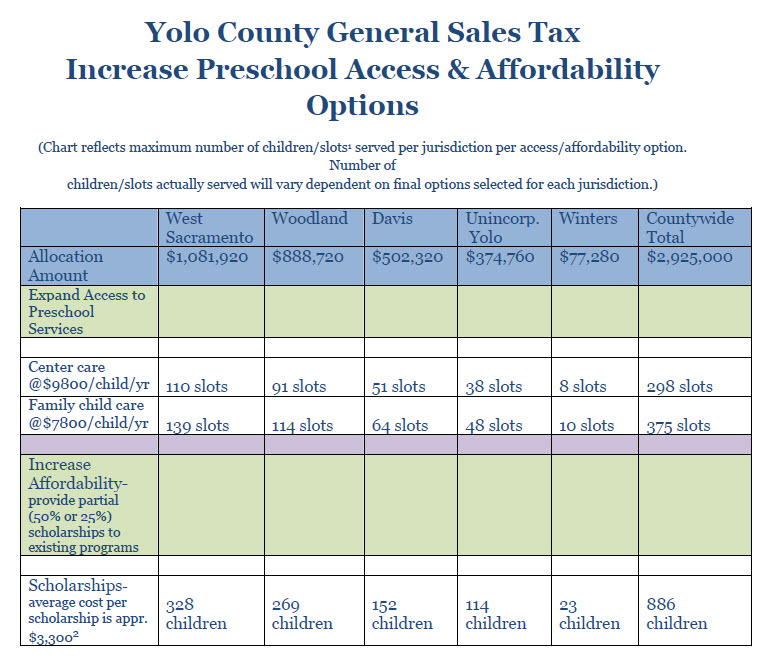 Staff writes, “Fund, in apportionment per jurisdiction defined in staff report, targeted scholarships in the form of provider reimbursements to existing preschool and early childhood education programs.  This affordability measure would be targeted to high-need children on an eligibility list with criteria for priority.”

The plan would “offer sliding scale tuition reimbursement to participating sites, both private and public. Up4WS charges fees to some parents at varying levels.”  It would, “Develop a central eligibility list for at-risk and low-income children countywide, identified by jurisdiction.”

Three categories would be primarily served: “System-involved children, including neglected, abused, or exploited; or at-risk of being abused, neglected, or exploited; or children who are currently in or have been placed in foster care.”  Second, “Low income families who do not qualify for federal or state funded programs (Head Start/State Preschool).  Third, “Children with special needs, if no other preschool services can be accessed.”

They see this as a ten-year program, “based on pilots, including Up4WS, requiring phasing of quality improvements and site enhancements, as well as capacity needs assessment and building. Outcome evaluation would have several years of data, with potential for follow through in elementary school years.”

16 thoughts on “Will Preschool and Early Childhood Education Initiative Have the Votes to Go Forward?”