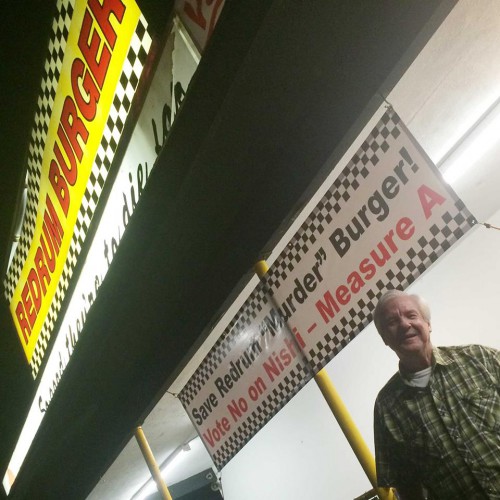 Recently, Jim Edlund, owner of the iconic Redrum Burger in Davis, posted that “Redrum Burger will eventually be shut down if Measure A passes.”

He said, “There have been a lot of rumors and misinformation circulating about this, some of which is being sent out directly by the Yes on Measure A campaign.”  However, he claims, “Redrum Burger acknowledges recently receiving emails about potential new lease terms, but no formal lease proposal has been received.”

“The last official meeting between Redrum Burger and the Nishi Developers and the representative for the current property owner took place in December of 2015, more than 6 months ago. The Nishi Developers don’t own the property, they simply have an option to purchase in the future. The meeting resulted in no formal feedback. No letter or proposal was ever received as a result of that meeting.”

Mr. Edlund has been an opponent of Nishi from the beginning of the campaign, donating $2200 to the No on A campaign.

However, the Yes on A campaign issued a statement late yesterday countering Mr. Edlund’s contention that Redrum Burger, which began as Murder Burger before changing their name in the 1990s, will have to close.

The campaign told the Vanguard, “In these final hours before the June election, there is misinformation being floated around regarding Redrum Burger.  To be clear, the Nishi Gateway has on multiple occasions offered Redrum Burger a space at the Nishi Gateway as the property’s first tenant and at Redrum’s current rent. Redrum Burger was first approached in 2011 about the long term trajectory of the Nishi project. This is an indisputable fact. Nishi would love to house the famous ostrich burger for decades to come.”

According to them, “The Nishi Gateway offered Redrum a long term lease at its current rent. Redrum has rejected these fair terms and hasn’t even proposed an alternative. This information is not reaching Redrum’s customers, because Redrum is actively deleting comments and blocking people that correct the record.”

The campaign stated, “This public misinformation campaign is disappointing and confusing. If Yes on Measure A passes, Redrum can have a few thousand potential new customers, a modern facility, and safer bike access for its South Davis customers, at the same rent it currently pays. It’s just not true to say Measure A forces Redrum to shut down.”

They continued, “It was not our decision to make these negotiations public, but there is a major social media offensive underway to convince people who would otherwise support our campaign to vote ‘no’ based on a false premise. We have no choice but to correct the record.”

As the Vanguard reported, “Last week, Nishi reached an amicable arrangement with the Third Space Art Collective. The Nishi team is going above and beyond to be a good neighbor to Olive Drive businesses.”

The campaign reiterated, “Again, Redrum Burger has been offered the option to stay at Nishi as the property’s first tenant on a long term lease paying their current rent. Any objective observer would consider this offer more than fair.”

In an article appearing in the Vanguard this weekend, former Chamber CEO Kemble Pope offered his analysis: “In my humble opinion, this one is a red herring. Redrum will certainly be affected, but they’ve turned down all offers of help. I’ve gathered a bunch of information from a few sources, shared it on their FB page, and Redrum has not disputed any of the following.”

From a source at the Yes on A campaign, “If Redrum closes its doors after Measure A passes, it is their own choice. They are not in any way being forced to close. Quite the opposite. It will likely be 2 years until any construction begins. But, their building is old and in disrepair, and they have a chance to upgrade their location at the same rent. They shouldn’t pass up the opportunity. The property owner has been in discussions with Redrum for over three years!”

From the property owner to the owner of Redrum Burger: “Jim, I’d like to offer you space in one of our buildings at the Nishi site for the same rent and equal space that you have now. A new facility for you on the Nishi property. Dan, my project manager is copied herein.

“Or reduced rent to $1000 plus CAM over the next 3 years in your current space with a one-time payment of $10,000 if your lease terminates prior to 3 years. That would come into effect when I acquire the property. This would go to June 2019.

“Or assistance in finding another location in the next 2 years. There is no bulldozer coming in July – as mentioned prior – we have a lot of work to do before we need Olive Drive. Let us know if this is acceptable. Look forward to your response.”

From another source in commercial real estate, “Redrum has known of Nishi plans for 5 years and have made no efforts to find a new location.  The building is failing and does not meet ADA requirements.  Redrum  has lost business to IN and Out and Dutch Bros traffic has hurt his business.”

According to Mr. Pope’s research “Redrum has been offered the following and refused them all”:

Mr. Pope writes: “Jim Edlund, the owner, has decided instead to oppose the project rather than taking the 5 years of notice to be proactive.  He has been offered multiple forms of assistance and options, and he has rejected them all.  Jim demanded free rent through 2019, which was apparently being considered, but that fell apart when he started funding the No on A campaign.”

He adds: “Obviously there is no agreement they can reach before Election Day, but he has had plenty of advanced notice and has decided to do nothing.”

(Note correction: The Yes on A press release was issued late yesterday, June 6.)

35 thoughts on “Will Redrum Be a Casualty of Nishi?”