On Tuesday night, the city of Davis and the city council said goodbye to Dan Wolk, whose tenure of five and a half years on the council ended.  Meanwhile, Robb Davis was sworn in as the new mayor, Will Arnold as the councilmember replacing his longtime friend on the council, and Lucas Frerichs was sworn in for a second term while Brett Lee was named mayor pro tem.

As Dan Wolk prepared to step down, it was Senator Lois Wolk who captured the moment by stating, “We’re here tonight to say thank you for a job well done Mr. Mayor.”

She emphasized the positive working relationship between the city of Davis and the legislative offices.  She noted his “positive outlook for the city of Davis,” stating, “you are upbeat and a champion for the city.  It’s because you believe there is an important role that government provides.

She pointed out, “Your ability to work together has resulted in tremendous advances for the city.” 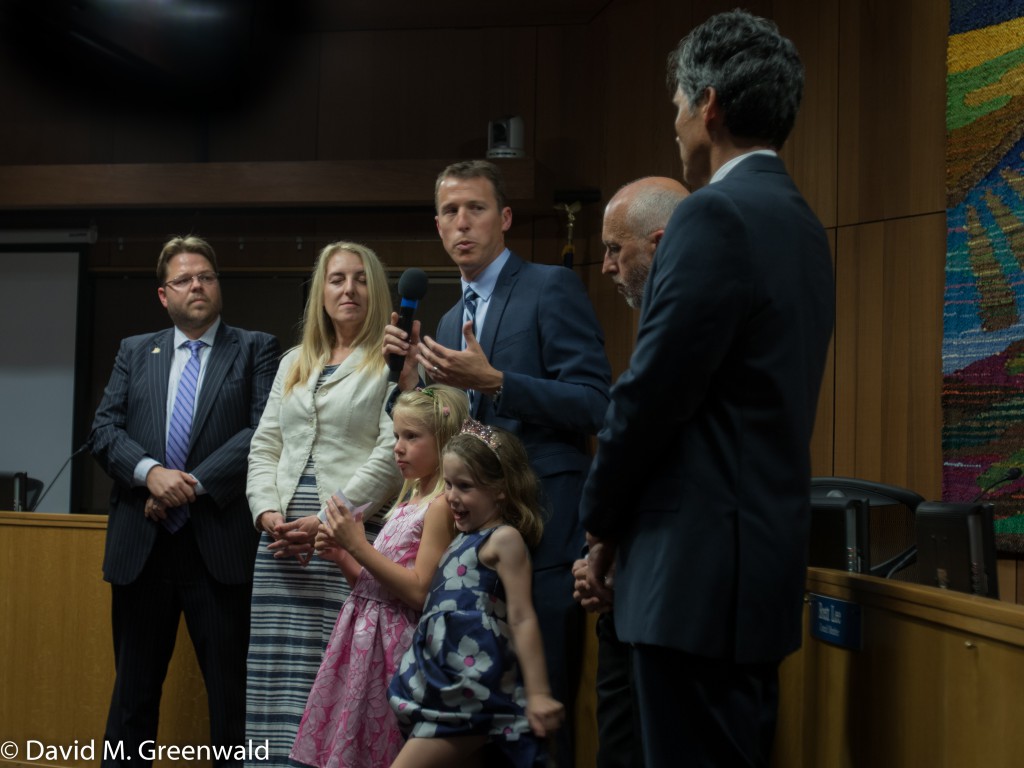 Will Arnold was sworn in as a new councilmember on Tuesday by his nephew Mark.  During his comments, he said, “This is truly one of the proudest moments of my life.  Not only because I for decades wanted to serve our community in this capacity, but I believe our community will serve an important role in the course of human history.  That we may someday be a beacon of light in a darker world.

“I believe our biggest challenge as a community has yet to have been faced, but so has our finest hour,” he said.  “All of that is to say that I plan to take this job seriously and I thank you all for giving me the opportunity to do so.” 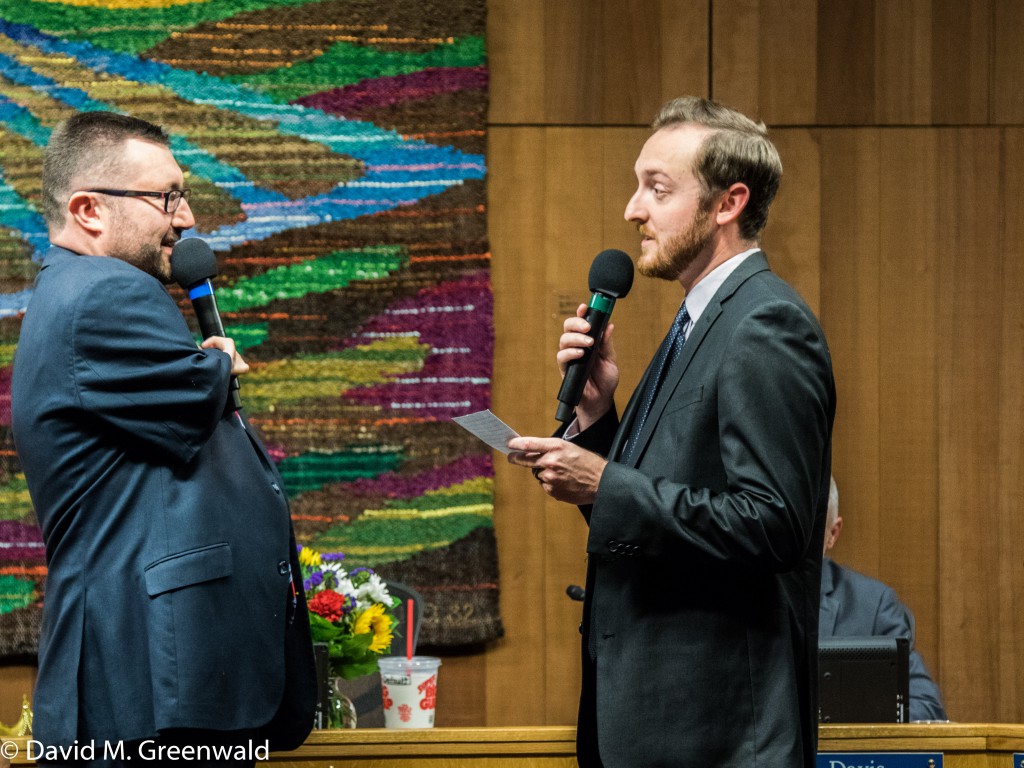 Lucas Frerichs was sworn in by his former boss, Assemblymember Rich Gordon.  He said that, for the last four years he has been hard at work serving our community.  “We’ve continued to keep our eye on the prize,” he said.  “We continue to get this city’s fiscal house in order.  We’ve also been focused on fixing our infrastructure, and investing in Davis’ future – whether it’s a $200 million surface water project that will pay dividends for generations in this community to come, whether it’s the total upgrade of our wastewater treatment plant, something that doesn’t get a lot of attention. 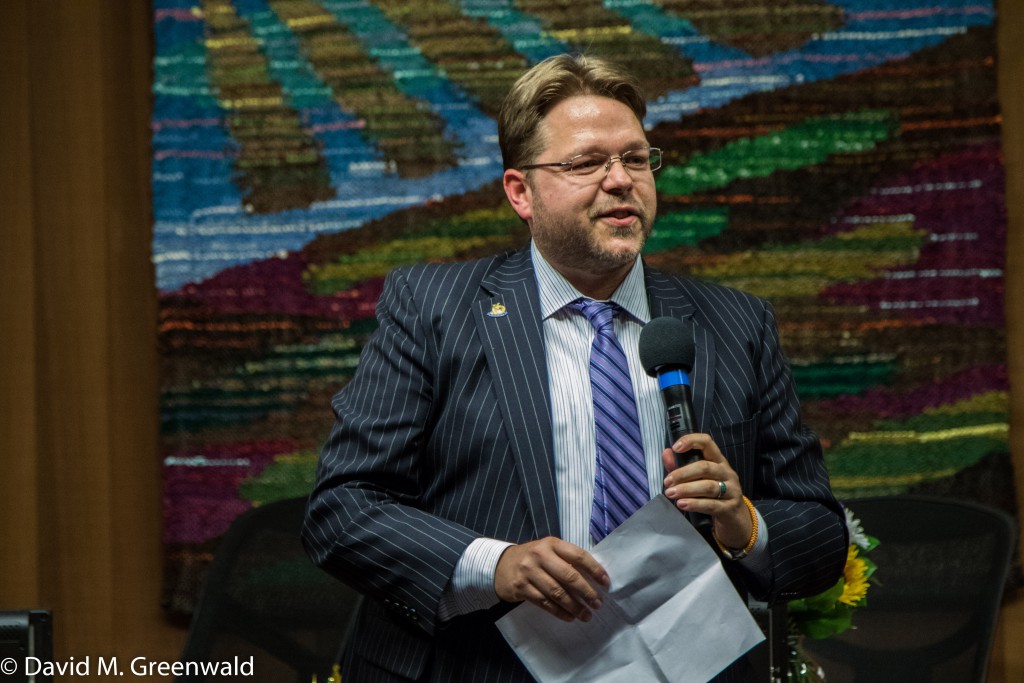 “Those two pieces of our public infrastructure are going set this community up for generations to come and it’s quite remarkable that we’ve taken these on in the past four years.

“Making the decision to run for reelection to the city council is not one that I took lightly.  Serving on the Davis City Council is indeed a big job.  And it’s one that I also take quite seriously,” he said.  “I’ve found that serving this community is extremely rewarding and I’m extremely humbled to be here and to have earned the support of the citizens and the voters of Davis to serve for another four years on the Davis City Council.” 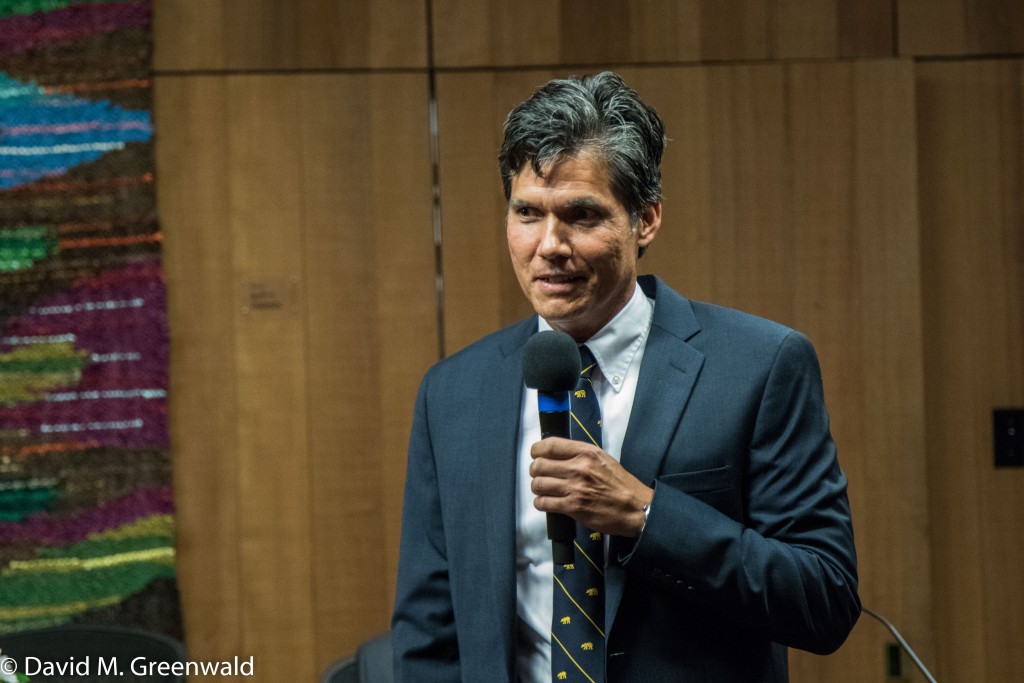 Brett Lee was sworn in for his second term, his first as mayor pro tem, by long-time supporter and activist Richard Livingston.  He expressed gratitude to live in such a nice community with people who really care about the community who are trying to make it better.

He noted that it is “a well-functioning” city council where “we try to work together and sometimes that’s not easy at 11 or 12 at night.”  He said it is time-demanding, “but I can say I’m a better person for it.  I know so much more about my community and by knowing more about my community, I really appreciate it more.” 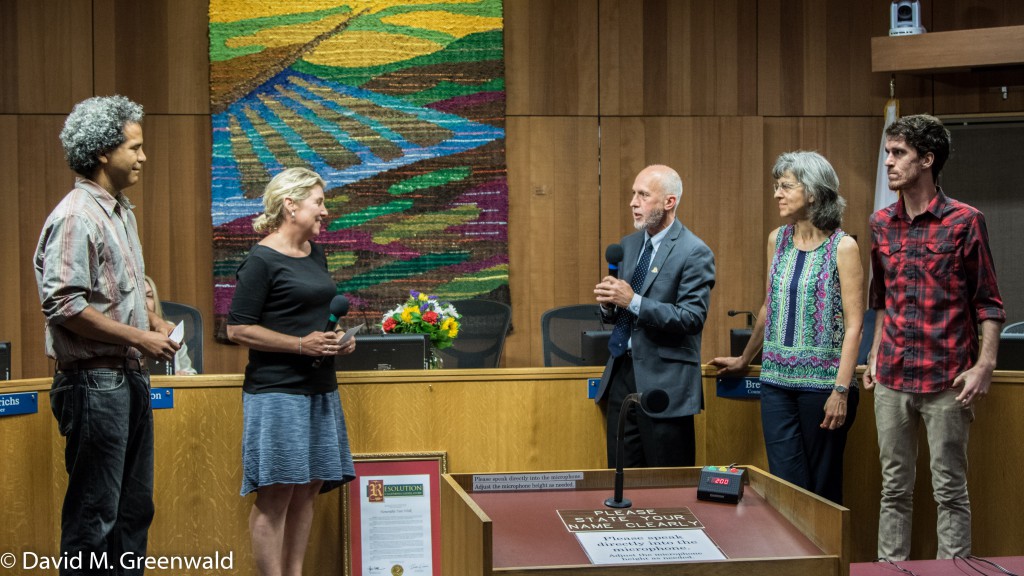 Robb Davis was then sworn in as the next Mayor of Davis by Reverend Kristin Stoneking and David Breaux.

In addressing the public, he stated, “I’m really cognizant here that the mayor serves as the pleasure of the council.”  He said that the word “serve” is the word he wants to “see exemplified in the two years that I have before me – enabling us to help make decisions, helping us to navigate challenging times and being available to my colleagues as a sounding board and also as a friend.”

He said he was thankful to have this opportunity.  “I don’t think anyone really thinks that they’ll be here. Certainly growing up in a small town in southeastern Pennsylvania, I didn’t even think I’d ever come to California,” he said. 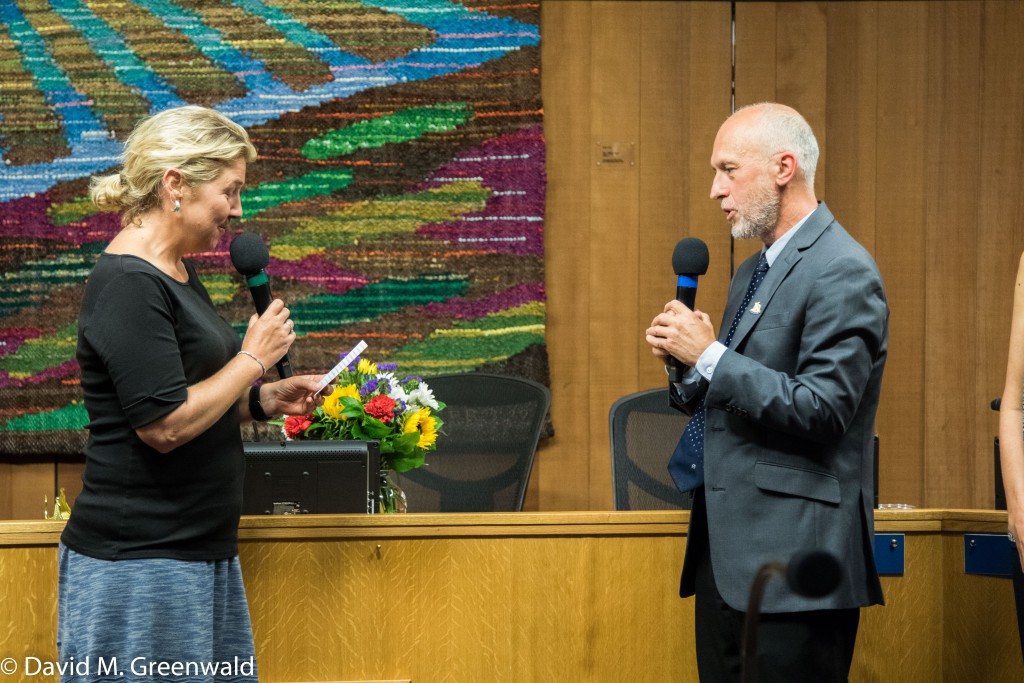 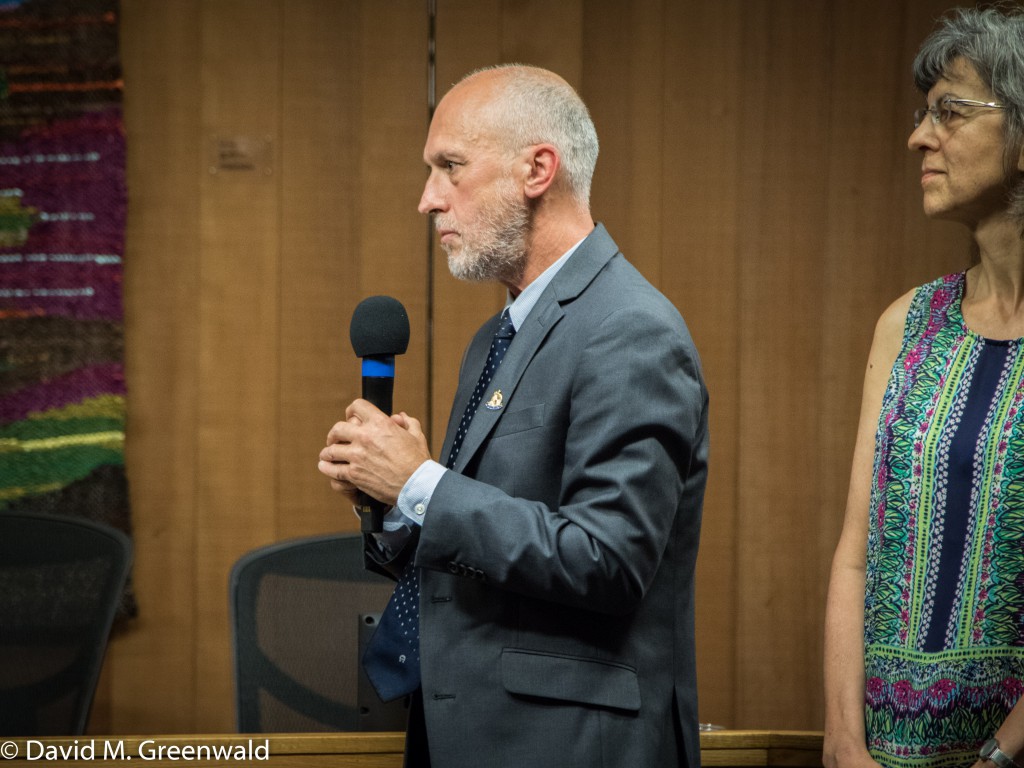 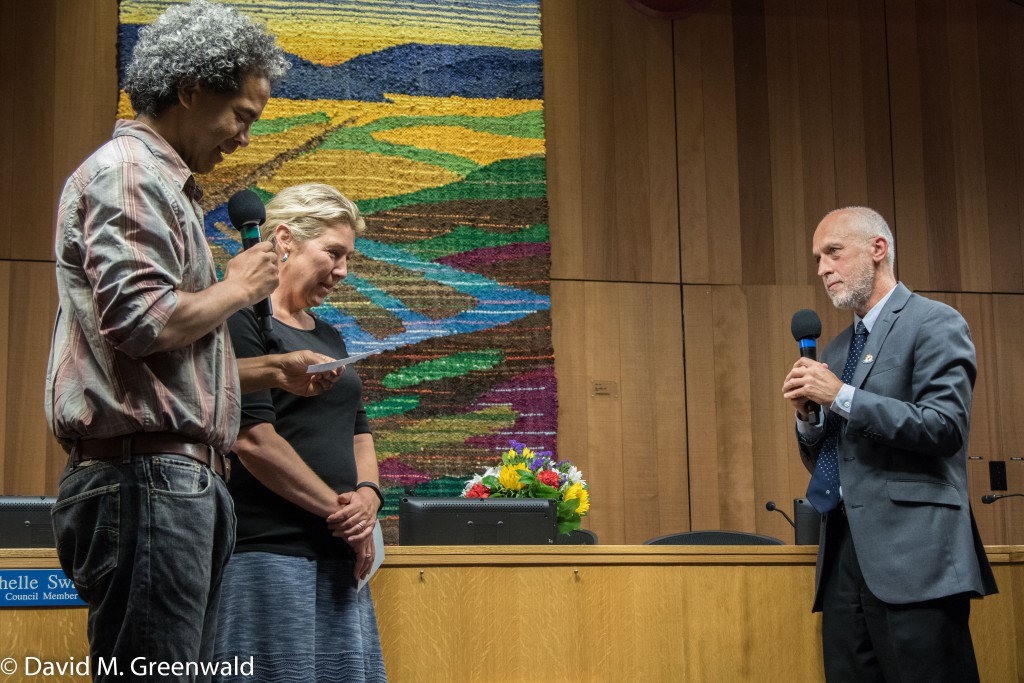 He said soon after he moved here, he was riding his bike on Pole Line Road and “I was thinking to myself, is this real?”  He said, “I thought, how could I ever fall in love with such a flat place and yet I had.”

“The thing that strikes me in this is how many people are doing so many things,” he said.  “The social capital in this community is really to be envied.  I’m thankful and I hope I can help deepen that.”

He said he made some “solemn promises” and he asked the community “to make some promises to us.  I’d like you to be as engaged as you can be.  To read up on the issues.  To dig into them.  To make a commitment to go below the surface on the challenges that we face to really understand them. 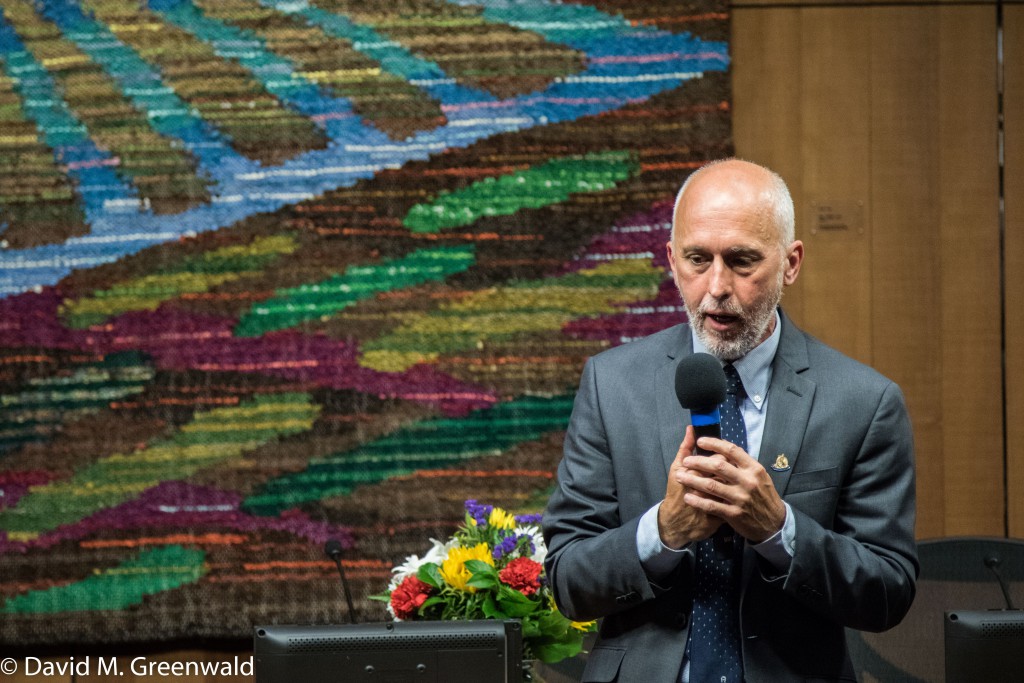 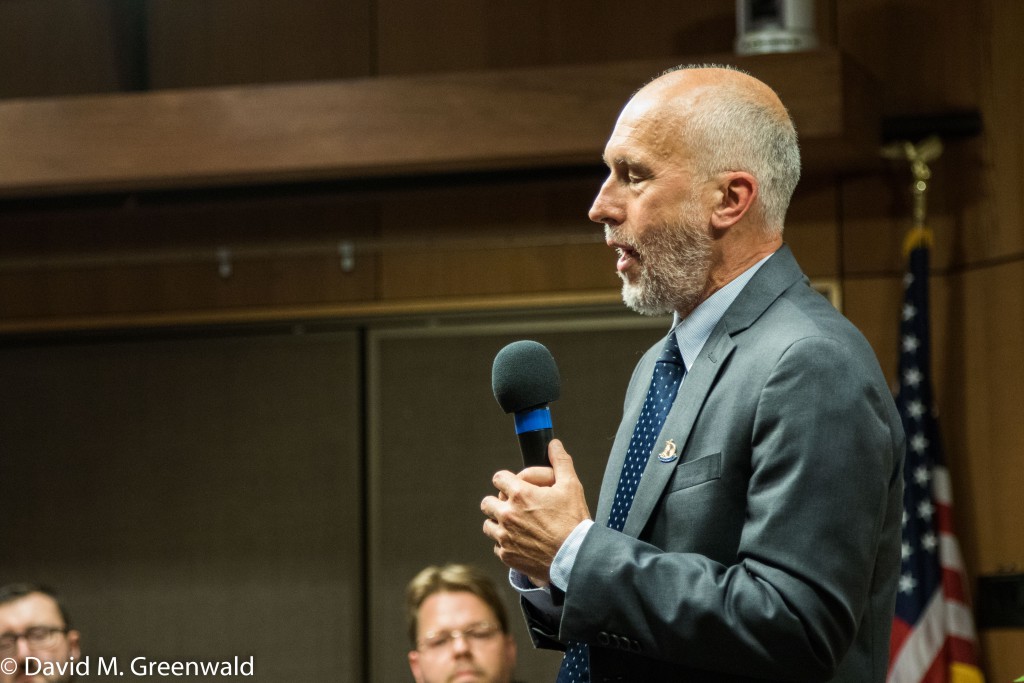 “We need you to encourage us genuinely, challenge us vigorously, disagree with us honestly, and always with a little bit of salt to preserve the whole thing, because we have many contentious issues that are hard to deal with, emotions run high, we do get angry, we do fear sometimes, and I think what we most need is your patience.

“I hope you’ll make that commitment to us,” he said.

Following the ceremony, the new council, led by Mayor Robb Davis and Mayor Pro Tem Brett Lee, got down to the business of the city.

9 thoughts on “Changing of the Guard with the City Council”