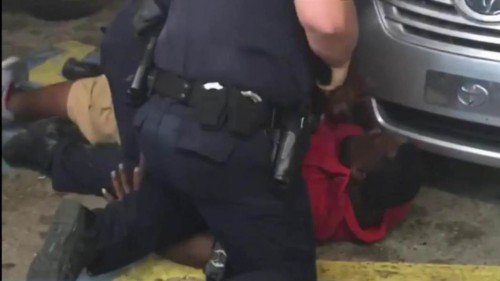 I appreciate Rich Rifkin’s column today, “When whites are shot by cops, there’s total silence,” because it addresses an important counter-narrative that protesters should be focused on police shootings in general, rather than police shootings of blacks.

The shooting of any individual by police is a tragedy – white, black, Hispanic, Asian, etc.  However, there is a critical component to the complaints here – and it rests with the unjustified killing of citizens under the color of authority.

The addition of racial bias adds a critical element to this discussion because it gets to the heart of the complaint in the black community that the police are targeting and singling out young people (primarily men) of color for disparate treatment.  The heart of the issue is not just excessive force by police but unequal protection under the law, and it is a complaint that goes deep, routed in the heart of the enforcement of slavery and Jim Crow – the police as the extension of the arm of white supremacy that many today believe remains in vestiges.

Still, I think Rich Rifkin largely misses the point in his narrative.  He cites the story of Dylan Noble, describing him as “an unarmed white teenager who was shot (four times) by two Fresno police officers on June 25, including two rounds after he was supine on the pavement.”

He writes, “Despite the dramatic footage, the usual protesters have neglected the Dylan Noble story. Why? Noble was white. That does not fit their narrative of who cops shoot.” However, he seems to undermine his own narrative by opining that “it appeared to me to be a justifiable killing. I only wish the officers had a better alternative.”

Mr. Rifkin then goes through a statistical exercise showing that the majority of police killings are of white people.  He does acknowledge, “If you compare the rates of those killed by cops to their racial/ethnic share of the U.S. population, blacks are being killed at double their proportion of the population.”

He then cites Peter Moskos who analyzed the data and “compared the number of individuals being killed by police to homicide rates and the rates of people who are convicted of killing police officers.

The problem as we pointed out in our column on Monday is that not all police shootings are created equally, because some are in fact the appropriate use of force or at least a justifiable use of force.  And while PERF (Police Executive Research Forum) and other police organizations are looking into ways to reduce the use of deadly force, even in cases where it is justified, we are in a lot of ways here not making an apples to apples comparison.

But it’s actually worse than that, because it means that only 6.8 percent of whites who were shot were unarmed, compared to 13.1 percent of blacks.  Those stats really get at the heart of the angst.  The police shootings and killings we are hearing about are not a black getting in a gunfight with the police and dying – we seem for the most part to be accepting those deaths – but rather the unarmed black man scenario that we believe could be handled in a better way.

Or in some cases, like last week, where the individual had a gun, the question is whether the individual actually represented a threat to the police. In Minnesota, Philando Castile informed police he had a gun and was shot multiple times supposedly reaching for his ID.  In Baton Rouge, Alton Sterling was pinned on the ground but still deemed to be reaching for a weapon.  In both cases, the shootings may be deemed justified eventually, but questions will remain.

But there is another problem with Peter Moskos and, by extension, Rich Rifkin’s analysis linking the homicide rate to those killed by police. Research has not established a tie between the two.

The authors concluded that “racial bias observed in police shootings in this data set is not explainable as a response to local-level crime rates.”

A report released a few weeks ago by the Center for Policing Equity, “which reviewed arrest and use-of-force data from 12 police departments, concluded that black residents were more often targeted for use of police force than white residents, even when adjusting for whether the person was a violent criminal.”

Also, “an independent analysis of The Post’s data conducted by a team of criminal-justice researchers concluded that, when factoring in threat level, black Americans who are fatally shot by police are no more likely to be posing an imminent lethal threat to the officers at the moment they are killed than white Americans fatally shot by police.”

These series of studies put the use of those statistics into question.

Rich Rifkin then cites the most recent research that the Vanguard highlighted last week from Harvard Economist Roland Fryer.  As he notes, Professor Fryer writes: “On non-lethal uses of force, blacks and Hispanics are more than 50 percent more likely to experience some form of force in interactions with police.”

However, Professor Freyer found no discrimination when it comes to cops actually shooting a civilian: “On the most extreme use of force — officer-involved shootings — we find no racial differences in either the raw data or when contextual factors are taken into account.”

As we noted in our analysis of that study – first, it bolsters the belief that many have that police are more likely to use force on blacks.  The limitation of the portion of the study that Mr. Rifkin highlights is that the shooting data comes from Houston only and therefore has to be considered preliminary rather than conclusive.  We simply don’t know that Houston’s practices are generalizable.

Rich Rifkin reaches two conclusions.  First he writes, “The ideology of Black Lives Matter (and the national media) is that black people are being targeted for death by our racist police. The actual facts show that is not true.”

The problem with that conclusion, as we have mentioned, is that the study he cites is limited to Houston on deadly force, while the finding did show police are more likely to use force on blacks than whites.  That would, in fact, seem to back up the belief that black people are being targeted (though perhaps not in the rare fatal shooting) by police.

I find it odd that Mr. Rifkin cites a study, that shows that police act in a biased manner towards blacks in use of force, to argue that police are not acting in a biased matter on shootings. Doesn’t that study simply illustrate that there is a problem of bias in policing?

Second, “Too many people are being shot and killed in police-civilian interactions.”  That I agree with, but ignoring the racial component may not fix the problem.

I am gratified to learn, for instance, that Davis police are undergoing training for implicit bias.  I do not believe most police are overtly racists – there are some that would seem to be, look no forward than the texts from SFPD – but I think that police perceive subconsciously a greater threat with some people than others, and that is where we can work to improve things.