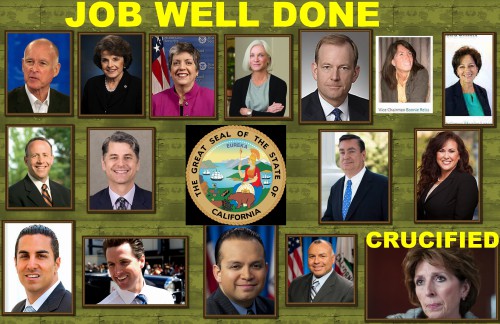 It seems to me that UC President Janet Napolitano’s “Internet Scrubbing” Campaign Hypocrisy” and the $158,000 internet publicity campaign to suppress criticism of a scathing state audit is not so much “another nail in the coffin” as it was stated recently by Melinda Guzman who is a Chancellor Katehi legal counsel. Rather it is a prelude to the settlement-agreement negotiations.

I don’t know for sure and I believe that nobody on the Davis Vanguard forum knows what is the real subject of the investigation conducted by Melinda Haag and McGregor Scott, who are “white-collar crime” defense attorneys and former U.S. prosecutors.

Haag and Scott, defense attorneys of Orrick, Herrington & Sutcliffe LLP, were supposedly hired by the UCOP at the end of April 2016. Due to the circumstances surrounding the investigation, I am guessing that they were retained by UCOP in February 2016 or in early March 2016.

Taking into consideration the UC Davis Academic Senate TIMELINE disclosure, Napolitano stated on March 9, 2016, that Chancellor Katehi had good intentions when she accepted a seat on the board of DeVry Education Group. The chancellor has since apologized and taken other appropriate measures, she said. Napolitano stated that: “Katehi has done a good job and that it would hurt the university if she resigned.”

Why did Napolitano suddenly turn around and demand a resignation from Katehi and then serve a suspension letter to the chancellor after she refused to resign? This all happened after protesters left Mrak Hall and everything was going back to normal. Who gave the order to Napolitano to destroy Katehi? Was it the president of the Board of Regents after the phone conference with Napolitano and UC General Counsel Charles Robinson?

Why did Napolitano or the UC Regents attempt to fire Katehi knowing that it is legally impossible and is unlawful regardless of the chancellor’s employment-at-will status?

Apparently Napolitano’s March 9, 2016, statement supporting Katehi was made by the UC president without consultation with the UC Regents or Robinson, who most likely had already retained Haag and Scott to defend UCOP white-collar criminals including Robinson himself and former UC Davis Campus Counsel Steven Drown

The witch hunt aimed at Katehi was orchestrated by Robinson and his partner in crime, Drown, who was fired by Katehi in 2013 and found safe haven in Robinson’s office. It serves purely to distract from their own and others’ past white-collar crimes.

The vicious and despicable attack against Katehi and her family is retaliation against Katehi from Robinson and Drown. Apparently, she was singled out for termination in 2011 because of her refusal to join Drown and Robinson to participate in covering up their and the UC regents’ crimes.

If Katehi had collaborated with Drown and Robinson in 2011, then today I would not be writing in my court briefs about the misappropriation of the $ 65,000,000 in public funds by UC Regents and the previous UC Davis administration.

I would not be writing in my court briefs about UC Davis’s loss of approximately half a billion dollars in revenue because of the UC Regents Al Capone-style multimillion-dollar tax fraud.

I would not be writing in my court briefs about two former State of California Attorneys General, Bill Lockyer and Edmund Brown, who is currently president of the Board of Regents.

I would be not writing in my court briefs and motions about former State of California recalled Governor Grey Davis and his former Chief Deputy Shelleyanne Chang, who is today Sacramento County Superior Court Judge.

Chang was involved in Janet Keyzer’s wrongful termination case, which was covered by the Davis Vanguard.

More specifically, in Keyzer’s wrongful termination case, Chang granted an anti-SLAPP motion filed against Janet Keyzer by the former UC Davis Chancellor Larry Vanderhoef, who together with the UC Regents participated in misappropriation of the $65,000,000 in public funds. In 2014, Chang was disqualified by Keyzer’s legal counsel, Mary Alice-Coleman, who was the subject of a recent Davis Vanguard article.

Keyzer’s wrongful termination case is indirectly connected to Katehi, who succeeded Vanderhoef and inherited from him Drown, who participated in the Al Capone-style unlawful power sale by the regents in 1999-2003 and 2012-2013. UC Davis Campus Counsel Steven Drown with other perpetrators orchestrated the pepper spray provocation attack against protesters on November 18, 2011, to create the infamous image of Lt. Pike for the UC Davis Chancellor and for UC Davis.

Keyzer’s wrongful termination case is also connected to UC Davis, as it involves unlawful research that was intended to evaluate pain diagnosis and treatment in state prisons but did not meet research requirements involving human subjects. This happened before Katehi became UC Davis chancellor.

It was on Morgan’s watch that UC Davis was conducting unlawful research involving human subjects, which apparently happened with his permission.

San Joaquin County Superior Court Judge Brett H. Morgan was involved in the prosecution of my psychologist spouse with media coverage and attacks similar to the attacks against Katehi today.
This happened shortly after the November 18, 2011, pepper spray attack on the UC Davis campus.

Morgan’s work history with the State of California government is similar to Chang’s.

In 1999, both Chang and Morgan worked together as deputy attorneys general in the State of California Attorney General’s Office.

Also, from 1999 to 2004, Morgan worked in the State of California Attorney General’s office with present UC Davis Campus Chief Counsel Jacob Appelesmith, who in September 2013 was transferred to the UC Davis Campus from the California Governor Jerry Brown’s Office, where he had served as senior Brown’s adviser since 2011. Appelsmith replaced Drown.

At the same time, Napolitano, the former US Homeland Security chief, replaced Mark Yudof as the new UC president.

It is also no coincidence that Robinson, on the advice of Napolitano, retained her two colleagues, the two former US prosecutors and white-collar crime defense attorneys, to prepare a defense for the regents and himself under false pretenses and to orchestrate a witch hunt against the UC Davis Greek-born chancellor and her Greek family from Davis, California.

It is also no coincidence that the attack against Katehi and her family occurred after I submitted my complaints about UC Regents, Robinson and Drown’s crimes to the federal authorities.

Apparently, from reading my complaints Robinson and Drown got the impression that I am Katehi’s dedicated enemy and that attacking the chancellor and her family would distract me from their crimes, destruction and devastation of many UC Davis employees’ normal existence, lives and livelihoods.

This makes me wonder how Napolitano will rescue herself from the standoff with Katehi, who is still legally the UC Davis chancellor.

Born In Poland Live in Lodi , California since 1989. In USA since 1982. Worked last 13 years in UC Davis Medical Center , Sacramento as a Power Plant Technician and Associate Development Engineer . Wrongfully terminated by UC Davis Neo -Nazis in December 2012 after despicable and inhumane retaliatory action akin closely to hunting Jews during the Holocaust

5 thoughts on “Guest Commentary: Another Nail in the Coffin”